Given the increasing importance of price in the 32-inch TV market, it’s getting ever harder to find 32-inch TVs that stand out from the crowd on a quality front. But the UE32H6200, while not without its flaws, is certainly a cut above the norm.

Given its likely second-screen status in most homes, we thought we’d start testing the UE32H6200 with its tuner feeds, as these will likely be the thing you watch most on it. And it does rather well. Particularly impressive is how noiseless it manages to make both HD and even standard definition feeds look, while also delivering a surprisingly detailed finish. Colours are rich and credible too, and basically the set does a fine all-round job of making even the grubbiest sources look easy on the eye. 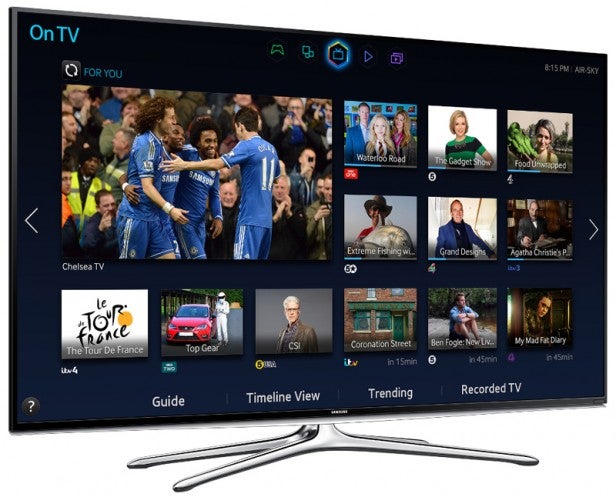 Turning to a few Blu-ray movies, the UE32H6200 mostly underlines its status as a superior 32-inch TV. The sharpness noted with broadcast footage is underlined even more by the clarity and detail of Blu-ray, and it becomes clearer, too, that this impressive sharpness isn’t joined by the sort of graininess or dot crawl noise sometimes seen on Samsung TVs (before you reduce their sharpness settings).

It’s great to see, too, that the detailing doesn’t take a bath during dark scenes. The panel at the UE32H6200’s heart clearly has a good enough native contrast range to deliver plenty of shadow detail while also reproducing a convincing black colour.

What’s more, this good black level is achieved even if you opt to deactivate the Dynamic Contrast processing system – a fact which means that a) the panel at the UE32H6200’s heart has an excellent native contrast range and b) you can enjoy dark scenes without having to worry about the sort of distracting brightness jumps associated with many dynamic contrast systems. Though if you do want to inject a touch more intensity into the way dark scenes look, you can actually use the lowest Dynamic Contrast setting without the brightness shifting becoming too hyperactive.

Another reason the UE32H6200 handles dark scenes better than the vast majority of its rivals is that it suffers with practically no backlight clouding; in other words, if you feed in a predominantly dark scene, even something as tough to handle as a black screen with a white circle at its centre, the dark parts of the picture look uniformly black as they should, rather than some patches looking brighter than others.

Samsung also scores a coup over many small-screen TVs by delivering an excellent colour performance. The breadth of its palette is wide, its colour temperature and ‘focus’ are very much tilted towards video rather than PC feeds, and there’s an impressive amount of subtlety in colour blend rendering, meaning the picture remains free of banding/striping artefacts. This colour finesse also plays a part in the picture’s startling sense of sharpness and detail.

There is one thing that occasionally works against this sharpness, though: motion blur. It’s not excessive by any means, especially by typical small screen standards. But action scenes do consistently look less crisp than more static footage.

Another issue now we’ve strayed into negative territory is that while black levels are good they’re not brilliant in the way Samsung tends to manage with its larger mid-range and higher screens; there’s a degree of greyness hanging over dark scenes that even reducing the backlight to seven – the level which represents the lowest point we felt comfortable going – can’t remove. Also, as usual with Samsung TVs, during dark scenes the panel sometimes shuts off completely to deliver a black finish, meaning it has to then power back up when light information re-enters the picture. This rather clumsy backlight manipulation can be distracting on the thankfully rare occasions where it occurs.

Used as the main TV for the review period
Tested for more than a week
Tested using industry calibrated tools, discs and with real world use
Tested with broadcast content (HD/SD), video streams and demo discs
Previous
Samsung UE32H6200 Review Next
3D, Sound and Verdict Review