Considered objectively, the UE32H6200 is a strong 3D performer. Its 3D pictures are detailed and clean, getting closer to a true full HD delivery than is common on small screens. The active shutter glasses don’t remove as much brightness or colour saturation from the image as we’d expect either, which is particularly handy on a screen as small as 32 inches.

We were suprised, too, by how little crosstalk (ghosting) 3D images contain. To be clear, we’re not saying there’s no crosstalk; it does show up gently on shots with extreme depths of field or where bright objects sit against dark backgrounds. But its appearances are rare and subdued enough to feel like a reasonable price to pay for the extra resolution you get versus passive 3D.

Motion is marginally juddery with 3D, but the quad-core processing engine means you can counter this with the TV’s provided motion processing tools quite nicely without fear of too many unwanted processing side effects.

Talented with 3D the UE32H6200 is, though, we still question its relevance on such a small screen. The 3D format on such a small forum looks like a hole in your living room rather than an immersive world – unless you’re sat exceptionally close to the screen, at any rate. Also the sense of depth in the 3D image reduces on smaller screens, making it feel like less of a reward for buying and then having to wear 3D glasses.

It’s notoriously tough to get decent audio out of a small-screen flat
TV. But while the UE32H6200 can sound a bit harsh and ‘squashed’ when
driven hard, it does deliver more volume and a more satisfying
soundstage than many of its 32-inch peers.

Although the UE32H6200 doesn’t ship with one of Samsung’s new touch-pad and point-and-click remotes, the remote you get is a decent effort, proving more useful and better built than the ‘non-smart’ remote supplied alongside the smart one with Samsung’s top-end 2014 TVs.

Any 32-inch TV has a pretty good chance of spending at least some of its time doing gaming duties. So it’s a relief to find the UE32H6200 measuring just 30ms on our input lag tests – a low enough figure to mean you won’t be able to blame your TV for any Titanfall deaths or missed Guitar Hero chords. 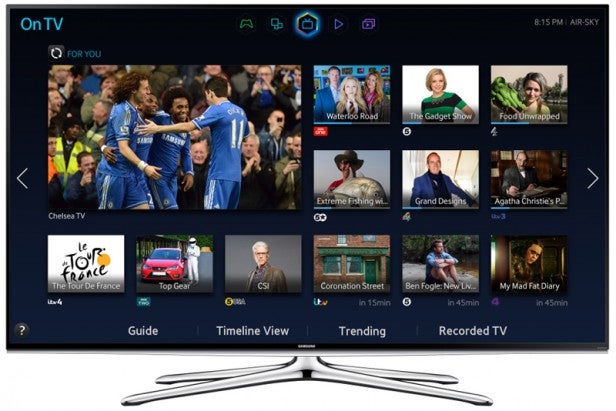 This is an interesting one. If you’re definitely restricted to a 32-inch screen size the UE32H6200 is a seriously attractive option, with one of the best picture performances the modern 32-inch TV world has to offer.

However, we can’t help but wonder if the set might have been better served by ditching 3D and knocking a few quid off its price. Especially when you consider that for pretty much the same money you can get the outstanding 40-inch Sony 40W605B instead.

Good as the Samsung is, the Sony is in a different league where picture quality is concerned.

This is an excellent 32-inch TV you can buy in comfort if that’s what you want or need, but for this money it’s worth considering larger TVs first.

Next read our Best TVs Round-Up.