The Samsung UE32F6800 is a 32-inch LED TV from the upper mid-level of Samsung’s latest TV range. As such it packs a pretty fearsome feature punch, including active 3D playback, Samsung’s ground-breaking new Smart TV engine, and multimedia support galore. Experience suggests the set will score highly in the performance department too – but let’s not get ahead of ourselves! 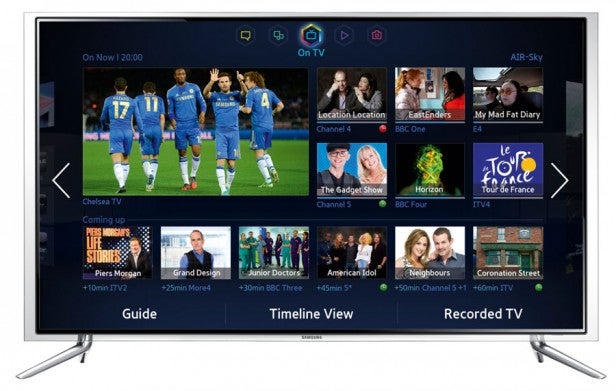 The Samsung UE32F6800 is a quite unusual-looking TV. The glossy black finish of the main ‘inner’ bezel is straightforward enough, but the extensive transparent outer trim is far from normal, adding well over an extra cm to the set’s frame width. What’s more, there’s some sort of doubling up of some parts of the extended transparent frame, as if to create a layering effect.

In photos this all looks great. For us, though, in the flesh the Samsung UE32F6800’s design is a bit fussy, as well as making the set take up more room than it needs to. The rather odd little legs that attach to each end of the TV’s bottom edge merely enhance the rather over elaborate aesthetic. Moreover, some might find the stand design might not fit on smaller multimedia shelves.

Switching our attention to the UE32F6800’s rear, we find a fulsome collection of connections. Highlights include four HDMIs, three USBs, Freesat and Freeview tuner connections, a LAN port, and built-in Wi-Fi – everything you would hope for, in other words, from a reasonably high-end TV in 2013.

The HDMIs support active 3D playback (two pairs of 3D glasses are included), while the USBs and LAN/Wi-Fi options support video, photo and music multimedia playback. The LAN/Wi-Fi options also, of course, let you access Samsung’s ring-fenced online Smart TV platform – and a very accomplished online platform it is too.

Particularly outstanding is its provision of all the main UK TV channel catchup services: the BBC iPlayer, the ITV Player, 4OD and Demand 5. No other online TV platform currently supports all these services. Plus you get Netflix, Lovefilm, Blinkbox, KnowHow Movies and various other video bits and bobs besides.

Other highlights of Samsung’s latest Smart TV engine are its voice recognition and gesture control features, as well as a startlingly sophisticated recommendations engine, which tracks your viewing habits and uses this data to pick out upcoming programmes it thinks you might like.

For a much fuller look at Samsung’s 2013 Smart TV system, check out our Samsung Smart TV 2013 review.

Although Samsung still refuses to seek the official support of the independent Imaging Science Foundation pro calibration group, the reality is that the Samsung UE32F6800 has easily enough set up aids to satisfy the ISF’s requirements. These include full colour management and white balance fine tuning modes, plus a series of gamma settings.

There are also a couple of different noise reduction systems (which actually we’d suggest you keep turned off, especially for HD viewing); a Film Mode we’d recommend you set to Auto1; and a Motion Plus mode which we’d suggest you use in its Clear mode for TV viewing.

For Blu-ray movie viewing we’d suggest you customise the Motion Plus setting by setting both its Judder and Blur components to three – though some purists may prefer to leave Motion Plus turned off completely for movies.

Samsung has a long tradition of not offering many picture presets, and this continues with the Samsung UE32F6800. This is unfortunate given that all the presets you do get – even the Movie one – set either the backlight or contrast settings way too high, leading to pictures that look noisy and forced.

As well as wanting Samsung to introduce a few more preset options, we’d like the input lag-reducing Game mode to be included in the main picture preset list, rather than being tucked away in an obscure subsection of the TV’s system menu. It follows from this point, of course, that if you are gaming on the Samsung UE32F6800 you really must track down the game mode if you want to optimise your performance.