A giant in the television, monitor, laptop, netbook, mobile phone and even camera sectors, the one area that Samsung has never strongly pursued – at least not in the UK – is desktop computers. However, that’s about to change with the introduction of the Samsung U200 and U250 all-in-one PCs. Today we’re looking to see whether the budget-oriented U200 can match the excellent Asus EeeTop ET2203 and MSI Wind Top AE2220 Hi-Fi as the all-in-one to get for less than £800. 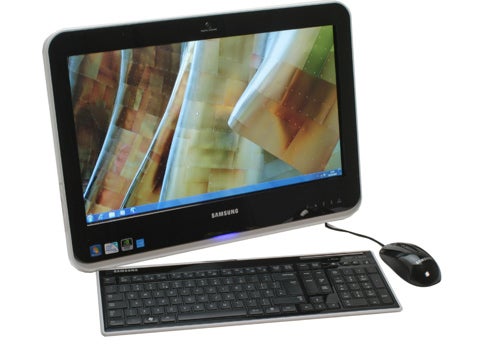 Straight off, there are a few obvious pointers that give away the U200’s budget status. Unlike its bigger sibling, the 23in U250, it doesn’t sport a Full HD resolution (it makes do with 1,600 x 900) or wireless peripherals. However, it does make up for this somewhat by offering a large 500GB hard drive, Wireless-N Wi-Fi and relatively powerful Nvidia GeForce 310M graphics.


As ever with all-in-ones, the U200 is as easy as pie to set up. A metal leg at the rear is not only stronger and easier to adjust than on most other all-in-ones, but much like with the original Eee Top it also serves as a carrying handle. 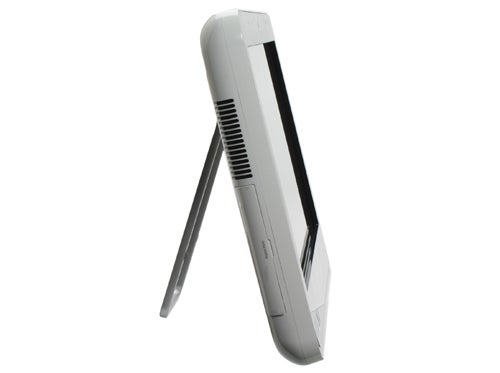 Thankfully the rest of the machine’s build quality matches up to the metal handle, with very solid plastics used throughout. In this regard it’s easily the equal of any of its competitors, though obviously not on the same level as the far more expensive, aluminium-clad Apple iMac.


In terms of looks it does less well. It features a very clean, two-tone design, but the absence of any metallic or transparent highlights makes it look cheap rather than elegant. The front bezel is an attractive piano black, but the contrasting white lip surrounding it just doesn’t work very well, despite a blue glow at the machine’s base adding a little novelty. Both the screen and bezel double as mirrors and are prone to fingerprints and dust, so you’ll need the included cleaning cloth often. 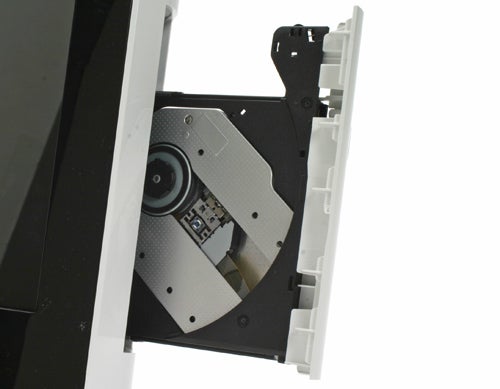 At the lower right corner of the bezel is a set of touch controls. Unfortunately these aren’t backlit, though we’re glad of the omission of any annoying bleeps. The first and most significant of these controls turns the screen on and off. It’s a shame that this is an unusual feature, as we feel it’s something all all-in-ones should have as standard. We can only hope other manufacturers will follow Samsung’s lead here.


Aside from this there are brightness controls and a button for opening the machine’s optical drive – a largely superfluous feature as the drive actually has a physical button of its own. To be honest we would have preferred some more control over the screen’s settings, like you get with the Asus EeeTop ET2203, but the U200 does better than some in this respect.

When it comes to connectivity, Samsung’s U200 doesn’t exactly impress. Along the left side is an unwieldy flap with soft plastic hinges that hides a memory card reader, two well-spaced USB ports (one of which doubles as eSATA), and two audio jacks (1x headphone, 1x microphone). It would have been much more practical without the annoying flap, but at least this hides the hideous colourful sticker Samsung has used to differentiate the ports. Having this visible would have given the U200 even more of a ‘my first PC’ look. 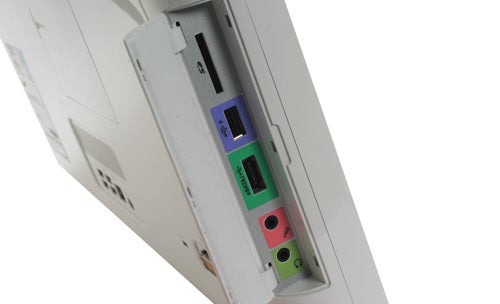 At the back, meanwhile, we have a further four USB ports, Gigabit Ethernet and a DVI output. Regrettably this is yet another of those frustrating all-in-one machines that don’t offer any video inputs, making it impossible to utilise the screen with any external devices. It’s especially galling as this is a deficiency that the similarly priced Asus EeeTop ET2203 and MSI Wind Top AE2220 Hi-Fi don’t suffer from. 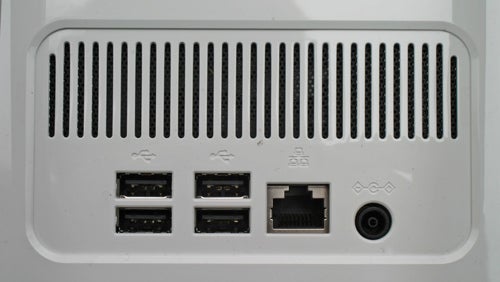 It’s even more of a pity as the U200’s 20in, 1,600 x 900 screen is surprisingly good. Once you get past the reflections you’ll delight in the even backlight and impressive greyscale performance, with a bias towards dark detailing at the cost of white range that should help get the most out of dark films and games. There’s almost no sign of banding or artefacts, and sharpness is excellent. 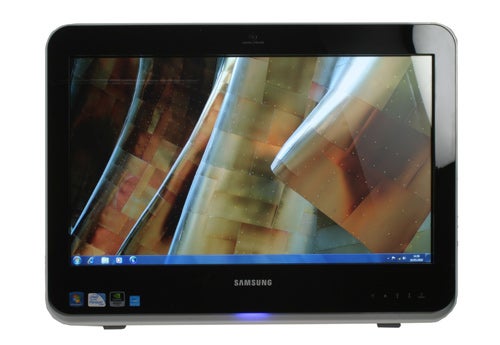 In fact our only complaint regards horizontal viewing angles, which due to strong contrast shift aren’t as good as most of the competition. It’s also worth noting that due to the screen’s resolution, 720p video may look a little less detailed as it is being upscaled. On the audio side of things, the 3W stereo speakers carry a bit more bass than we’re used to, but this advantage is nullified by distortion at higher volume levels and generally muddy mid-tones. They’re just about usable if you’re not picky, but pale in comparison to the AE2220 Hi-Fi’s impressive performance.


Getting to the included USB peripherals, Samsung’s mouse and keyboard are an interesting mix. The plain ambidextrous mouse is as basic as it gets, with an optical sensor, two buttons and a notched-feedback two-way scroll wheel. At least its curves make it quite comfortable to hold. 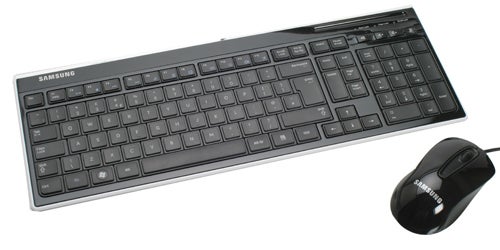 The stylish keyboard is more elaborate, with two-tone black and white styling to match the PC. It offers an excellent layout with matt tile-style keys that provide superb feedback: positive and springy but not loud. It also offers dedicated volume controls and a sleep key and is, overall, one of the best bundled wired keyboards we’ve come across.

Inside the U200, we have an Intel Core 2 Duo T4400 running at 2.2GHz. Again, this is inferior to the T6600’s used in both the Asus EeeTop ET2203 and MSI Wind Top AE2220 Hi-Fi, which feature double the cache. It’s a minor point though, as the T4400 should still be more than adequate for the daily multi-tasking diet the average user would feed it and the Samsung is cheaper than either.


As usual this is backed by 4GB of DDR3 RAM, though Samsung doesn’t buck its irritating habit of installing a 32-bit version of Windows 7 Home Premium that can only address 3.5GB of the memory. A 500GB 5,400rpm drive provides ample storage, though. 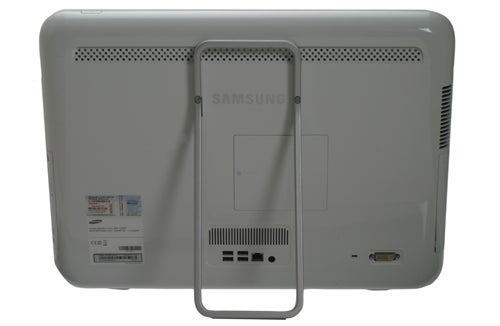 On the wireless side we have Wireless-N Wi-Fi and though Bluetooth is absent, that’s common for all-in-one PCs. What isn’t quite as common is the Nvidia GeForce 310M 512MB graphics card. While hardly enough to qualify this as a gaming machine, it does at least mean that the U200 can handle older and less demanding 3D titles at its screen’s relatively low native resolution. In TrackMania Nations Forever, for example, it managed a playable 34fps at medium detail on 1,600 x 900 and with 4x AA and AF. Call of Duty 4, on the other hand, didn’t really pass muster with just 20fps.


Possibly of greater import than the U200’s performance is how its touchscreen handles. It uses the same optical sensor system as the MSI Wind Top AE2220 Hi-Fi to provide a sensitive multi-touch system that works not just with your fingers, but with any object or material. The screen’s surface feels a bit smoother than some, though it doesn’t compare to glass-fronted machines such as the IQ810 and its kin.


What sets the U200 apart, though, is Samsung’s specialised Touch Play multi-touch software, which – though far more limited in scope than HP’s TouchSmart equivalent – can on occasion almost match that excellent interface for ease of use and pure fun. 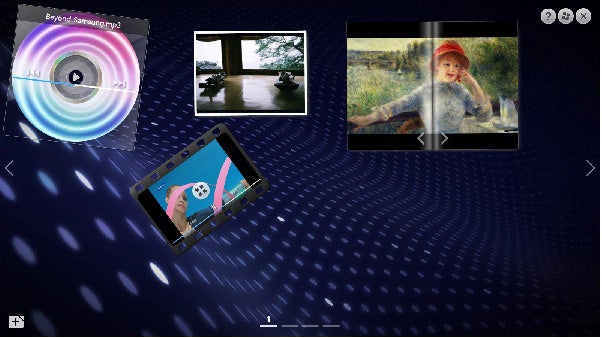 Though really only useful for file-browsing, it’s easy to use, quite attractive and fully customisable. Icons can be manipulated to be any size or orientation, and while watching slideshows or windowed videos you can turn, tilt and twist them any way you wish; you can even watch a video upside down if the fancy takes you. It’s never going to make the touchscreen an essential feature of this PC like it might be on a tablet laptop like the Packard Bell Butterfly Touch, but for occasional walk-up use can come in handy.


Unfortunately it’s not enough for the U200 not to be dwarfed by the MSI Wind Top AE2220 Hi-Fi. Though it’s £85 more expensive at time of writing, it more than justifies this small premium by being faster, better-looking and a having raft of features (e.g. a Full HD display, video input, Blu-ray drive, wireless peripherals and TV Tuner) that make the U200 look inadequate in comparison. 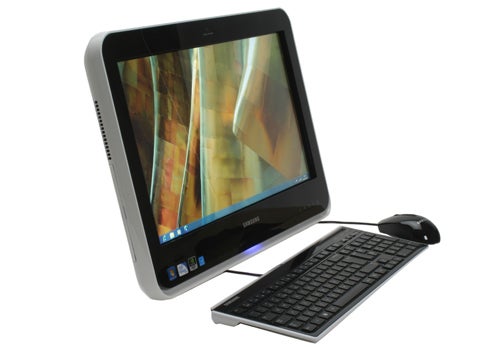 Only the smaller form-factor and the fact the U200 is cooler and quieter than most (virtually silent even under load, in fact) redeem it by comparison. However, unless that’s very important to you, it’s not enough to save Samsung’s first effort at a budget all-in-one from playing a squeaky second fiddle to some of the established players.


Despite its impressive touch-screen interface, the Samsung U200 all-in-one PC makes far too many compromises to justify its price – especially when the competition offers so much more for only a slight premium. It needs to come down in price significantly before it becomes a serious contender.

(centre)We’re frankly at a loss as to why the overall PCM score of the Samsung is higher than MSI’s, but as you can see it loses out in every individual benchmark. The Scan shows what kind of performance you can expect from a desktop PC at the same price point.(/centre)