Samsung’s Tocco did quite well in my hands last July. The full frontal touchscreen was really gaining momentum and Samsung managed to differentiate itself by coming up with the idea of widgets for you to pull onto the screen from a sidebar. This allowed you to personalise the phone but let Samsung retain control of how.


The Widgets remain in the Tocco’s follow-up, the Tocco Ultra S8300, but much else has changed. The Tocco Ultra is Samsung’s flagship handset for 2009 so I expected great things from it.


Every major operator has this handset free on various contracts. Vodafone is doing it free on £20 plans, for example. You can get it from around £350 on Pay As You Go. 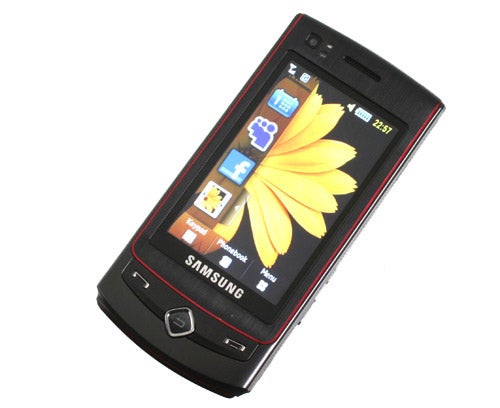 When you first pick up the phone, it looks like a standard touchscreened slab. Mine had a thin frame of red down its vertical front edges and around the bottom of the screen. The red really comes into play when you expose something the original Tocco didn’t have – the numeric keypad. 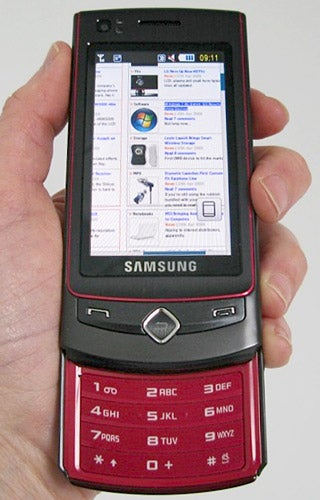 Yup, this is a slider phone and the concept of adding in a numeric keypad is a good one. It caters for those who want a touchscreen but aren’t sure they can cope with using it for on-screen text entry.


The red – actually a vivid, vibrant pinky crimson – also shows up on the back panel section that’s exposed when the slide is up. O2 has a blue version that looks just as in-your-face vibrant.

Build quality is superb. This mobile feels very solid and durable. The flat numberpad is easy to use at speed. Its keys are large and I had no trouble entering text at a fair old lick. The screen and frame are scratch resistant, and the slide mechanism is smooth. It delivers a very reassuring thunk when you open and close it. However, I did find that I had to press on the touchscreen to open and close the phone, and this sometimes meant I made selections when I didn’t really mean to.

The screen is another high point. Measuring 2.8in diagonally, it delivers 240 x 400 pixels. It is exceptionally sharp and bright, and that is in no small part due to its AMOLED technology, which really helps when viewing it outdoors and with colour contrast.


The automatic screen reorientation is a real plus point and something you’d expect as standard on a high-end phone like this. You would also expect there to be Wi-Fi but sadly, it is absent. You do get GPS and this is a 3G handset with HSDPA to 7.2Mbps. There is a front camera for two-way video calling. 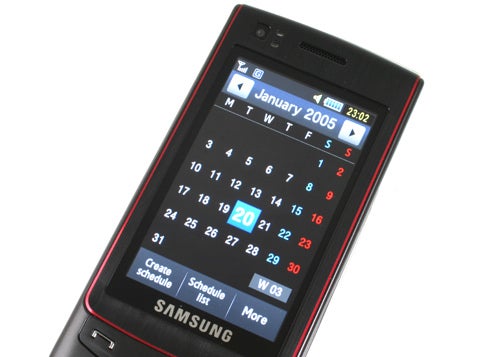 I found the touchscreen interface a little dodgy. There were times when it simply didn’t like my finger presses and I had to make several taps in order for it to respond. This was most irritating when doing things like entering text and setting up the camera.


You might expect some sort of multi-touch support, but it isn’t here. I found its absence most annoying when zooming web pages. You have to call up a zoom bar and use that which requires a few too many screen presses. At least you can finger-pan. Ed also has some interesting points to make on the user interface in the video review. There is also a lock button on the side of the phone that helps prevent accidental key presses when the handset is pocketed. 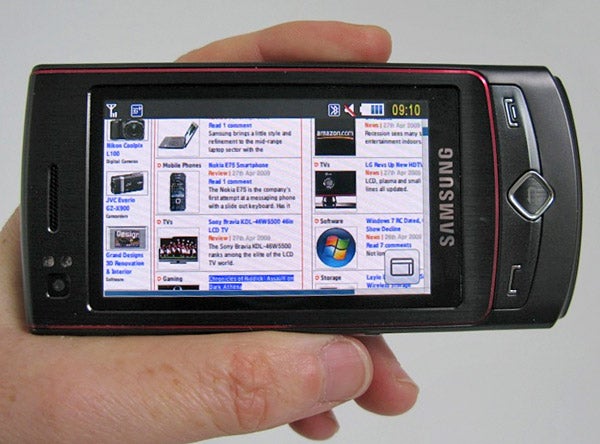 The widgets I mentioned earlier are easily dragged onto the main screen from a sidebar. There are lots of them, many connected. A Google search bar, AccuWeather, Facebook, MySpace, clock and calendar, shortcuts to music playback controls and the FM radio, to contacts and games. There is a birthdays reminder and even a download panel so you can get more widgets as time goes by.


One of the highlights of the Tocco Ultra S8300 is its 8-megapixel main camera. The lens hides under the slide until needed and is accompanied by a double LED flash and self-portrait mirror. 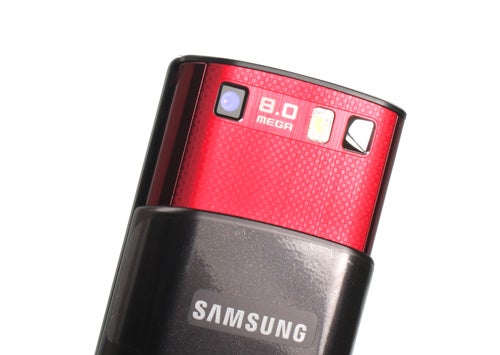 There was some shutter lag, which meant that images could easily be blurred if you move the camera while taking a photo, and it made framing action shots a little trickier too.


The camera does have some nice features, though. Geotagging, anti-shake control and blink detection are present. And the macro mode is superb. The flowers were photographed at a distance of about 10cm and colour reproduction and detailing are both excellent. The chair has a good level of detail and the coloured dish, photographed indoors under normal household lights, has good colour reproduction.

Battery life left me a little underwhelmed. The original Tocco got close to eleven hours of music playback from a full battery charge, then continued to remain alive lasting a total of over 15 and a half hours. The Tocco Ultra didn’t get anywhere near that. I got five hours 39 minutes of music playback and a total life of eight hours five minutes. That’s disappointing and I found I wanted to top the phone up every day just to be on the safe side. 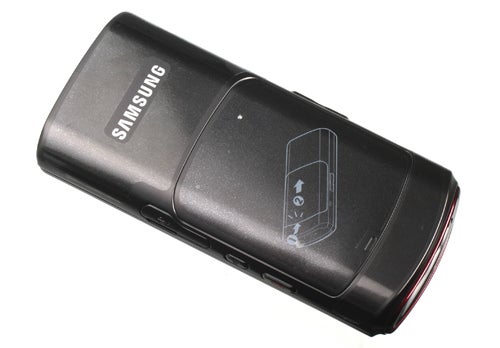 Also disappointing is the headset connector; it’s not 3.5mm. Instead, it shares the main power port. At least the provided headset is two-piece so you can use your own earphones in place of Samsung’s in-ear ones. And another plus is that you can record from the FM radio. That’s a rare feature indeed, easily accessed from the radio’s More softkey.


Memory is limited for such a high-end handset. There is 75MB on board and Samsung chooses to supply just a 1GB microSD card. The slot is under the battery cover and you need to remove the battery to get to it, which isn’t exactly convenient. 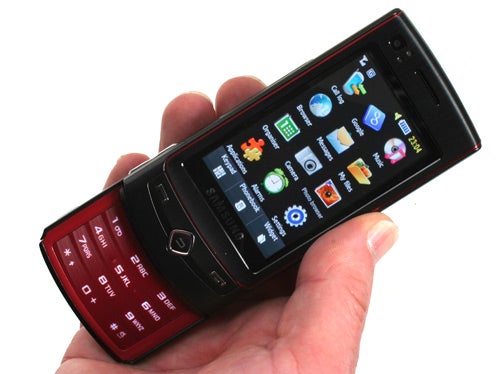 
As the flagship 2009 handset from Samsung, I expected the Tocco Ultra S8300 to be something really special. In some respects, I got it. The superb screen, fine build quality and number-pad/touchscreen combi are all big plus points. But there are a fair few niggles here too, and I expect other handsets to outshine it as the year progresses. 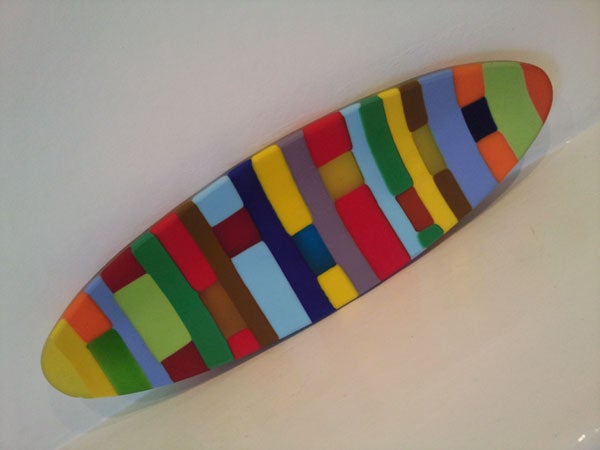 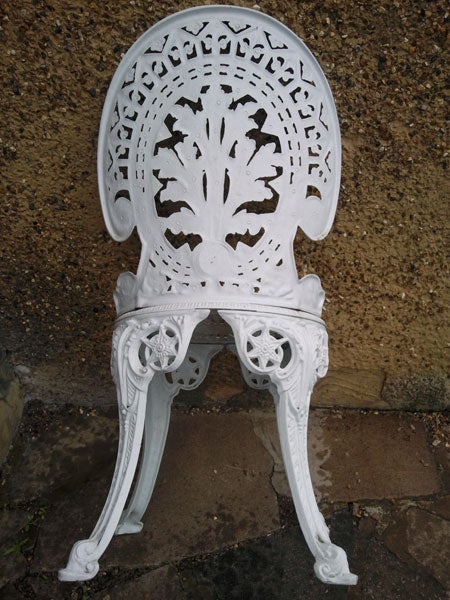 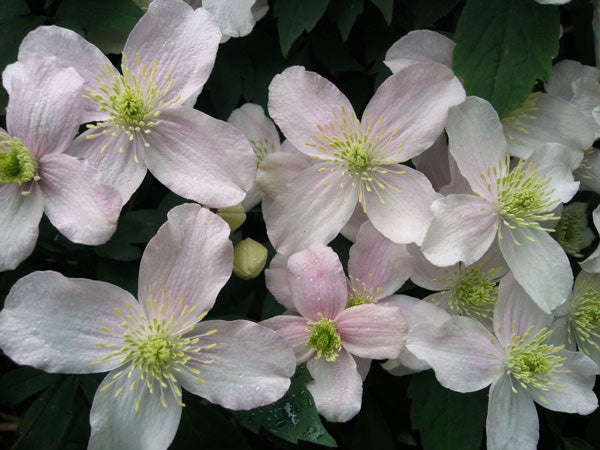