Fewer and fewer phones suffer by offering style over substance these days, because it’s just so easy to pack advanced functionality into affordable devices. The Tocco Icon is part of Samsung’s series of budget touchscreen phones, originally targeted at those who wanted a superficially iPhone-like experience without the high cost. However, they also left out some of the modern touchscreen phone’s best bits. What’s changed since the original Tocco’s arrival in 2008? Not much apparently, if the Tocco Icon is anything to go by.

The Samsung Tocco Icon continues the trend set by previous Tocco handsets. It’s fairly affordable, uses feature phone (as opposed to smartphone) software and looks pretty good for a budget device. Its shiny bits are all for show though. The glossy back and chrome and metallic sides are all plastic. No part of the phone’s exterior is made of metal, so if you’re looking for something that feels snazzy, as well as looking somewhat dapper, this isn’t it.

Build quality is decent though. The back is a full-length battery cover that clips into the main body, which looks slick enough. And while the mix of chromed and non-chromed side elements could do with some simplifying for style’s sake, the Tocco Icon is better looking than most bottom-rung smartphones. Part of this is down to the skinny screen. At 240×400 pixels it’s longer than the 240×320 pixel screens of the cheapest Androids, and hence appears more elegant. A little more slim and svelte like the HTC Legend than dumpy (if cute) Samsung Galaxy Europa. 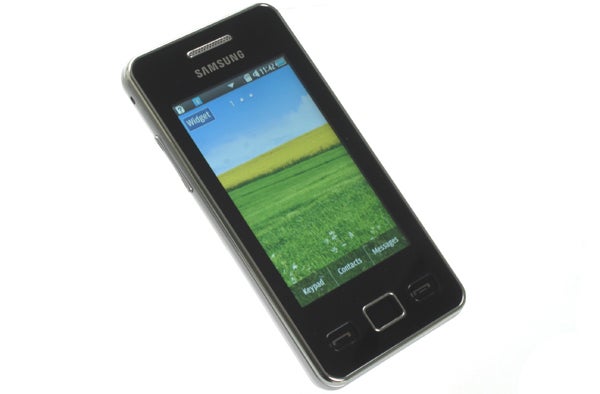 On-body connectivity is standard entry-level fare. There are microUSB and 3.5mmm headphone inputs on the top – the USB in particular classed-up a notch with a plastic sliding cover. Volume controls sit on the right edge while the microSD slot lives on the left edge.

At 12.4mm thick, the Samsung Tocco Icon isn’t remarkably thin by current standards, but this device relies as much on impressions as actualities. Like the Tocco Lite before it, the Icon knows how to fool passing bystanders into thinking it might be more expensive than it is.

It’s not all surface-level sheen though. The Tocco Icon improves on 2009’s Lite model with Wi-Fi and a capacitive, rather than resistive, touchscreen. Is this enough to earn the Icon a place along 2011’s phone catwalk though?

The Tocco Icon runs Samsung’s proprietary feature phone OS, topped with the TouchWiz user interface that’s a staple of many of the manufacturer’s phones including the Samsung Wave II. For a feature phone OS, it’s not bad-looking.

It gives you three home screens to populate with widgets, such as calendars and email notifications, and an attractive main menu that lays out all the phone’s key features as icons on pages to flick through. You can change the basic look of these menus with themes, downloadable from within the Tocco Icon’s browser. 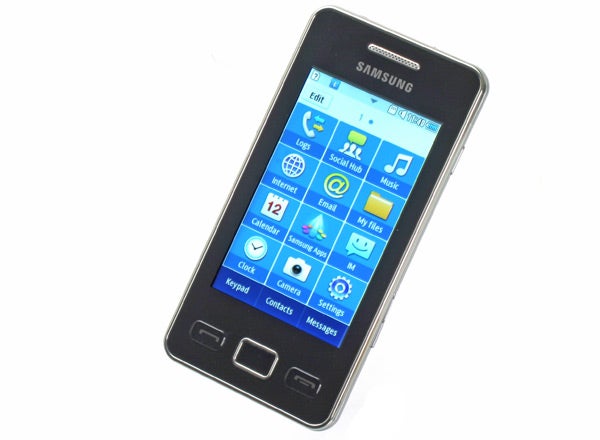 Superficially it all seems rather good for a phone that costs substantially less than £100, as it looks very similar to the UI offered by Samsung’s higher-end Bada phones. Scratch away the veneer though and there’s a disappointing amount of stuff actually there.

The widget library is all-too sparse, and misses out on obvious choices like an RSS news feed and a nice big clock. There are some clocks included, but not the nice big pretty ones many people like to plop onto their primary home screen.

App potential is similarly limited. Samsung supplies the phone with Facebook and Twitter apps – which we admit are this season’s must-have virtual mobile accessories – but beyond that possibilities on offer are seriously limited. There’s a link to the Samsung Apps web portal on the main menu, but at the time of writing this unlocks access to a grand total of zero apps and eight java games. This will improve in time, but we’d guess not by a great deal.

Samsung Apps – where are the apps?

The built-in social networking apps aren’t perfect either. The Facebook app is fine, but the Twitter app is happy to chop up words between lines, making tweets look ugly. With an Android phone like the Orange San Francisco you could easily solve this by downloading another client, but you can’t here. For quick social networking updates, it does the job. Just not immensely well.

Browsing is also compromised. Fairly regularly our browsing was interrupted by a pop-up informing us that the phone had run out of memory and couldn’t render the web page. Even a factory reset didn’t solve the problem. It would seem there just isn’t enough internal memory (or RAM) here to keep the phone ticking over happily – and there’s no microSD card bundled to help out. There is Wi-Fi on-board to keep browsing quick at home, but when out of range of a hotspot you’ll have to rely on non-3G EDGE connectivity as 3G HSPA doesn’t feature.

The capacitive touchscreen makes scrolling through pages comfortable enough, but we found the browser’s software keyboard fairly inaccurate, making typing addresses and emails a chore. Samsung has tried to keep this to a minimum, making you use T9 input when in portrait mode – saving the virtual Qwerty keyboard for landscape – but even so mis-typing letters was common. Oddly, the slightly different keyboard layout used in the text messaging interface is more reliable.

Both the browsing memory issue and dodgy keyboard could be fixed with a software update, we’d wager, but we also wouldn’t bet on one turning up and doing so any time soon. In adding Wi-Fi and improved social networking skills to its Tocco range, Samsung’s edging the series towards smartphone territory. But it just doesn’t have the chops to compete with bonafide smartphones – now available at the same price.

If your needs are simple though, its built-in features compare well with other feature phones. There’s a good built-in dictionary, an instant messaging app for Yahoo and Palringo users, a YouTube app, FM radio and Samsung’s Social Hub software, which cobbles together all your social networking updates in a single stream to stick on a home screen.

Samsung often wows us with its mobile screens, as it did with the Samsung Galaxy S2 and the Samsung Wave. Predictably, the Tocco Icon doesn’t pull-off such a feat. It uses a TFT LCD display with a 240×400 pixel display. This gives it a dpi pixel density rating of 143, which is on-par with 2.8in 240×320 rivals like the original HTC Wildfire.

A close-up shot of the Tocco Icon’s 143dpi screen

It’s not enough to make text look super-sharp, but you’ll struggle to find a touchscreen phone with a higher pixel density at this price. The level of brightness on offer isn’t quite enough to make the screen pop when used outside in bright sunlight, but for all other uses it’ll more than suffice. Angled viewing sets off significant colour shift, but there’s thankfully minimal contrast shift, which we find more distracting than the relatively innocuous colour shifting.

It won’t affect most people’s use of the Samsung Tocco Icon anyway, because it’s not geared towards applications that might expose it, like movie-watching. Higher up the price ladder Samsung produces phones that lead their respective classes on video playback, like the Galaxy S2 and Wave II, but this phone only offers the basic codec compatibilities of MP4, H.263 and H.264. If you have a library of DivX movies you want to watch on-the-go, you’d have to transcode them. Oh, and buy a memory card because the 30MB of internal memory really won’t go far.

There’s a 3.2-megapixel sensor on the glossy black. Once again, its housing is more attractive than the most phone cameras at this price, but performance doesn’t raise above the disappointing norm. 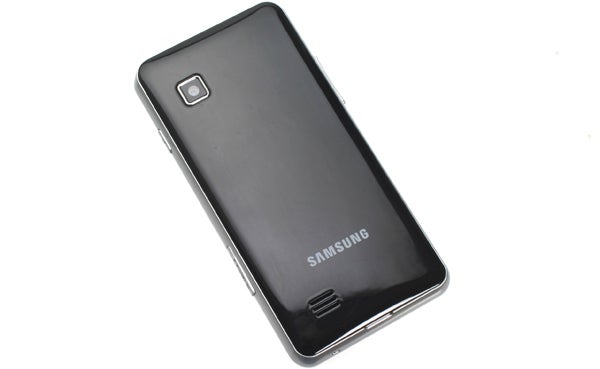 There’s no flash and no autofocus. The latter means you have no control over your subject, making it impossible to keep close-up objects in focus. There are eleven scene modes available to let you compensate for low-light conditions a tad, but once night time hits, the limited usefulness of the Tocco Icon’s snapper ebbs away altogether. In optimum conditions, pictures may look reasonable to an untrained eye – but zoom in to pixel-level and you’ll see that the sensor isn’t great at picking up fine detail. As with any low-end, fixed-focus phone camera, keep your expectations low.

The Samsung Tocco Icon has set itself a difficult task. It’s a feature phone with some smartphone-like features, but pushes close to the price boundary of the cheapest Android devices. On a pure surface, it’s one of the most convincing smartphone imitators yet, with a pretty attractive design and interface. However, the capacitive screen is disappointingly inaccurate in use and its apps and games potential is woeful even by the standards of feature phones.

The Samsung Tocco Icon looks better than many of its price rivals, but in spite of pumping Wi-Fi into this latest model, the Tocco series is in danger of becoming irrelevant. Its price is perilously close to that of perfectly good low-end smartphones, and when the capacitive touchscreen isn’t much fun to use in operation here, we suggest you seriously consider one of those models. Unless the Tocco’s shiny black ‘n’ silver look already has you transfixed.

Scene modes can compensate for low light levels a bit, but any low-light shots tend to be grainy