In an age where widescreen displays are now almost standard fare, I never thought I would find myself wanting a standard 4:3 monitor again. However, the Samsung SyncMaster XL20 isn’t your average display. In fact it’s in another league when it comes to image quality, so much so that to use one, is to want one. 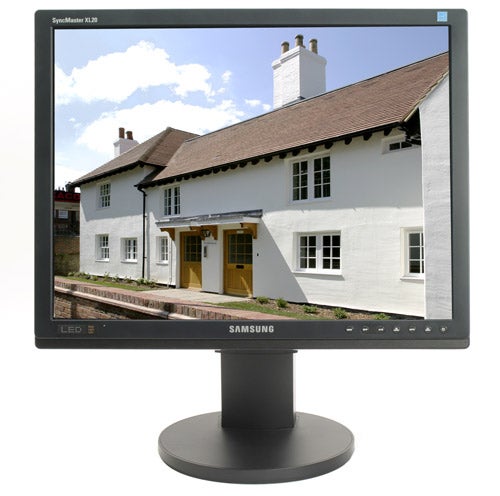 The reason for this is that XL20 uses an LED backlight rather than conventional Cold Cathode Florescent Lamps (CCFLs) found in almost every other desktop LCD display. Using LEDs over CCFLs brings with it a number of advantages, the most fundamental of which is that the LEDs are able to create a much purer white level, and thus, a much larger colour gamut.


Whereas standard monitors can only produce around 82 per cent of the NTSC standard, the XL20 can display 114 per cent, the full area of the Adobe RGB natural colour space. More significant is where that increased range is – in the areas of greens and reds, which really should make an impact on how accurately and vividly images are rendered on screen. This is of key importance for a colour critical workflow situation. There’s no point spending ages getting the colour for a product right on screen only for it to come out quite differently when it’s manufactured or printed.


LEDs have other advantages too. There’s virtually no warm up time required so you don’t have to wait for your monitor to stabilise to get correct colours. Next, they are more eco- friendly, in that they don’t contain mercury. Thirdly, they’re more robust as they’re much less susceptible to sudden failure or burnout. They can fade over time, but even with regular use you’re looking at many years of benefiting from your LED backlit screen. 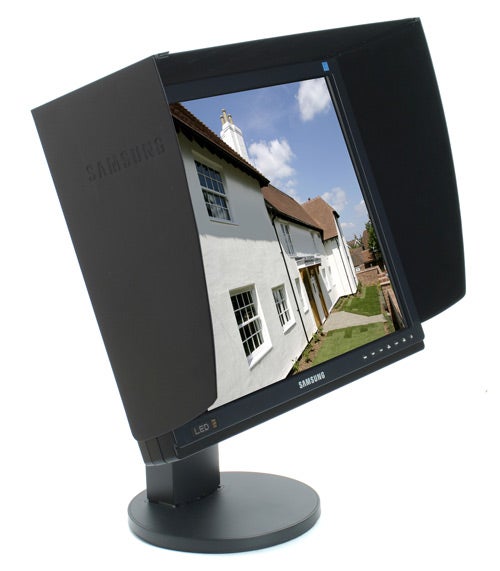 We’ve looked at a reference level LED backlit screen before in the guise of the NEC Spectraview 21in. However, at the time of review in November 2005, the NEC would set you back nearly £3,000, and bizarrely, nearly two years later, the same supplier now wants even more – £3,297.79 – excluding VAT!


Now, we have no doubt of the NEC’s credentials but with the LED backlit XL20 available on the virtual street for a mere £765, including VAT, it’s going to attract some serious attention. And to get to the numb of it straight away, yes, Samsung has done a very good job with the XL20.


As befits as monitor of this ilk, the Samsung comes with a colour calibration unit in the box – the Eye-One Display 2, from X-Rite and also a hood, helping to block out any surrounding ambient light that may affect the screen, which has an immediate effect of boosting effective contrast ratio. Also supplied is software to use the calibrator, the Natural Colour Expert.

The XL20 has a viewable diagonal area of 20in, one inch less than the NEC Spectraview, so there’s one area of cost cutting already, albeit a small one. As you would expect for a monitor this size, the resolution is 1,600 x 1,200. With the same vertical resolution as a 24in, and about the same physical size, you could imagine pairing this with a conventional 24in display for everyday work such as browsing and email, and having this next to it for specialist, colour accurate work. However, when you run the colour calibration you have to switch to single display mode. 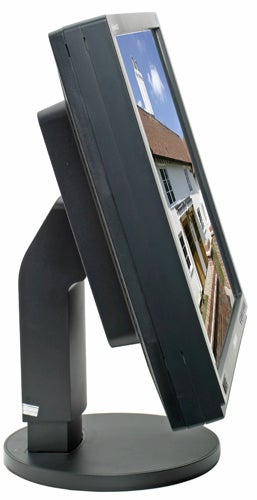 The monitor already has the stand attached in the box and only requires the removal of a holding pin. Once removed this enables the stand to move upwards when required – the height adjustment is very useful. The monitor also sits on a swivel stand making it easy to turn your display round to show an image to a colleague. The display can also be titled forward and back and be fully pivoted 90 degrees, giving you plenty of flexibility.


On the right hand side you’ll find two USB downstream ports and one upstream for connecting to your PC. This is handy, especially for connecting up the supplied calibration unit.


Round the back you’ll find two DVI ports, though be aware that there’s no mention of HDCP compliancy, so you won’t be able to watch HD DVD or Blu-ray movies using this display. The power supply is integrated and there’s an override switch for it.

Once you’ve got the monitor set upon the desk you’re going to want to run the profile software and calibrate the screen using the Eye-One Display 2. However, as I’m running Windows Vista this naturally enough brought with it its own problems. I installed the monitor driver that comes on the disk, but this essentially just gives a name to your screen in Windows and passes on basic information regarding its supported resolutions and refresh rates.


I then installed the Natural Colour Expert (NCE) but then found that the system couldn’t find a driver for the Eye-One. It seems that, at least for Vista, you need to go right here on the Samsung web site and download the a USB driver as well as the latest version of NCE for Vista. Part of the challenge is that the text in the USB driver installation wizard doesn’t display in English, so you have to guess the right buttons to press. All part of the fun, I guess. Once done you should install the Eye-One and manually point Windows to the driver. Once done, NCE will load.

After you start the program it will ask you to place the calibrator in the centre of the screen. This has a suction area to make it stick. At first I didn’t want to do this too hard so as not to cause any damage but after it fell off I had to push a bit harder and it did leave small marks on the screen. You might want to instead tilt the screen to prevent it from falling.


When you first launch, you can adjust maximum brightness, black level, gamma, and white point. You set these to your liking and then once it’s going it emits a series of colours and patterns that the calibrator reads. However, there’s no progress bar and it’s impossible to tell when the process has finished – it just keeps going. I waited over 20 minutes before hitting escape from the program to find that it had completed. However, on another system I quit earlier and the process hadn’t finished. A dialogue box does come up when it’s done, but it appears underneath calibration tests, so you can’t see it. This is something Samsung should sort out, it need to be much more user friendly. 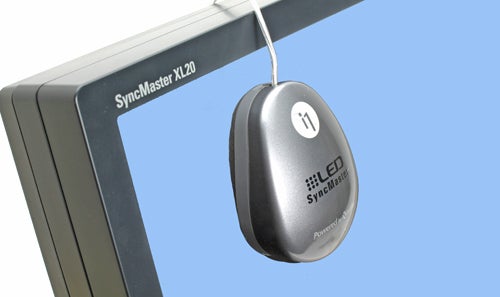 Once done you can save the profile. This takes a few seconds as it actually saves the profile to the monitor, and you can switch to this using the Mode button on the bottom right, with the options being, Custom, SRGB, AdobeRGB, Emulation and Calibration. As you select each one, the name of the profile is actually lit up along the bezel, making it very easy to see, which is a nice touch.


While all this is theoretical, as soon as I set up the Samsung I could see that it looked different to any other display I’ve used. What’s noticeable straight away is the white point – it looks truly white, unlike the mottled yellow, or bluish tinge that most LCDs tend to offer. The level of brightness and its even intensity can be detected even in Windows. Moving Windows about in Vista, I could make out patterns in the Aero theme that I’ve never noticed before. Text is also stunningly sharp.

When it came to viewing photos, I found that the colours jumped from the screen – they really popped. I actually found that sometimes it was almost too intense, looking slightly unnatural, particularly in the reds. As such, it is vital that a screen like this is calibrated correctly, otherwise your images can look almost hyper-real.

Having a screen such as this made me want to go and re-evaluate some snaps I took on a recent day out. The colours and clarity were outstanding, in particular grass, with fabulously lush greens. What’s more, there’s plenty of detail in darker areas. I could see things such as freckles on faces that I just hadn’t noticed before. I’ve seen the contrast ratio listed as both 600:1 and 700:1 in different places on the Samsung web site, while another review I found online referred to it as 1,000:1. Either way, it’s a decent black level.


Viewing angles are also imperious, with virtually no colour shift right out to the sides or from way below or above. It’s the best performance from an LCD I’ve seen in this regard. 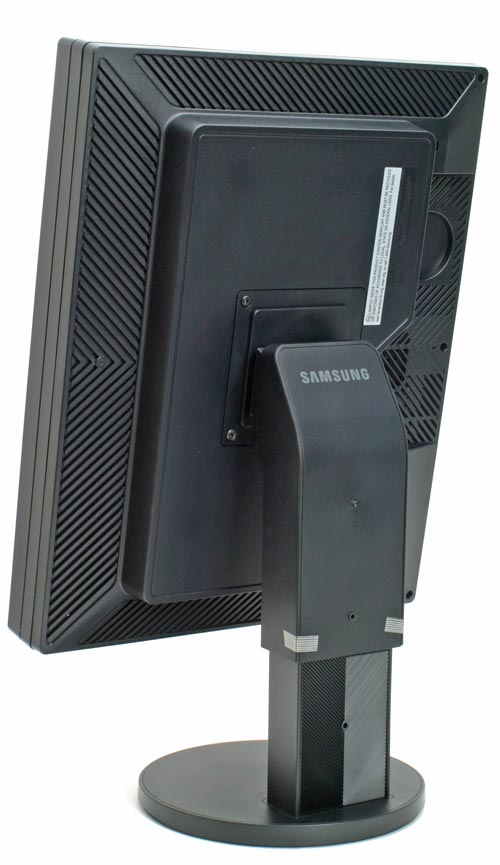 Running DisplayMate, I could find nothing to object about – the results are essentially the way it’s meant to be displayed. Colours are rich, while greyscale levels and colour fading are essentially perfect. You’ll be hard pressed not to notice the richness of the colours, be it video or gaming. The response time is listed as 8ms, but I did sense that I’ve seen smoother motion from super low response time 2ms gaming panels, though of course image quality wouldn’t come close.


Certainly, the XL20 is a master class in what LCDs can do with the most intense colours I’ve even seen from an LCD. I’ll find it hard to go back to the relatively poor LCD fare that is standard these days. I’ll know that I’m not seeing my pictures to their full potential. While the £900 you can pick this screen up for is a relative bargain, it’s still an expensive technology and so isn’t ready to go mainstream, though screens like this are the first step. We’ve already seen it in a few high-end notebooks, let’s hope we see it in even more affordable displays before too long. If your work is colour critical though, then this would have to be an essential purchase.


With the XL20, Samsung has clearly tried to bring the benefits of LED backlit displays to a more affordable price point and thereby a greater audience. On that score, it has succeeded admirably. I’ve never seen an LCD display with colours as rich. If you want access to a wide colour gamut display, without paying earth shattering prices, then right now this is your only choice.