Samsung has a long history of remaining at the cutting edge of display design, whether it’s with ultra-slim, brushed-metal televisions like the C8000-series or ‘touch of color’ monitors like the EcoFit SyncMaster P2370. In fact the latter is a relevant comparison, as we’re now checking out the similarly-sized SyncMaster PX2370. This 23in, LED-backlit monitor sports an even slimmer chassis with more inputs and outputs, better power saving and physical controls, while keeping that all-important Full HD (1,920 x 1,080) resolution.

As is nearly always the case with monitors these days, the PX2370 is very easy to set up physically. Just click the base into the screen’s attached stand, tighten a thumb-screw and you’re good to go. As you might have guessed, however, adjustability is sadly limited to tilt. While this is pretty much the norm, especially among designer monitors such as this, fully adjustable entrants like the BenQ V2410T and the Samsung SyncMaster BX2240 have shown there are alternatives. Unfortunately build quality is also adequate rather than good, with far too much creak for our liking. 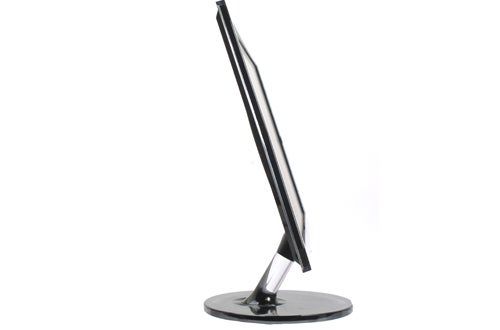 Unlike its adjustability or build, the PX2370’s subtly integrated, back-facing connectivity is quite impressive. For video, you get your choice of DVI or HDMI digital inputs. This means no VGA, but Samsung kindly provides a VGA to DVI cable for those who still need it and there’s an ‘Auto’ button that resynchronises an analogue signal for this very scenario. 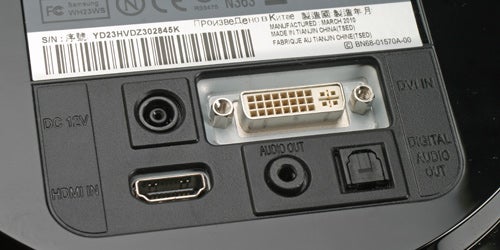 While the PX2370 thankfully omits speakers, it does feature top-of-the-line audio outputs which will carry audio from the HDMI source. In addition to the usual 3.5mm analogue audio jack that’s commonly found on many monitors for this purpose, you’ll also find a rare (at least for a monitor without TV aspirations) but very welcome digital optical output, meaning you can pass through perfect-quality 5.1 surround sound to an external speaker system.

As we’ve come to expect from Samsung, the PX2370’s aesthetics are arresting – and we mean that in a good way. There’s no ‘touch of color’ here, but most will likely prefer the monochrome scheme of this model: we certainly do. Its even-sized black bezel is fetchingly set off by a deep transparent surround, an effect repeated in the stand and semi-transparent smoked black base.


Though there’s quite a bit of glossy black plastic, it’s more resistant to fingerprints than any such finish we’ve come across recently, and you can avoid touching it altogether thanks to the thick transparent edge. Overall, this monitor is very slim (26.5mm at its thickest point), and its design is cohesive and eye-catching. Indeed, we prefer its angular body to Samsung’s previous, generally curvier efforts. 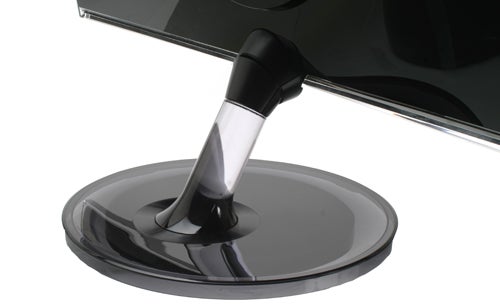 At the bottom of the bezel resides the power switch, highlighted by a faint white curved LED strip and a chrome outer edge. Though it looks like a physical button, the switch is actually activated by touch, and is very sensitive.


The PX2370’s controls, on the other hand, are actually physical buttons, hidden away behind the right-hand side of the bezel with identifying icons on the monitor’s extremely slim side. These buttons would have worked a lot better if the VGA-sync button (which incidentally lacks any secondary function) had been moved away from the OSD controls. Unfortunately this is not the case, and since all five buttons are the same shape and size, it’s easy to get confused. However, starting at the top they lie naturally under your four main fingers and offer positive feedback, though the monitor does tend to wobble a little when pressing them. 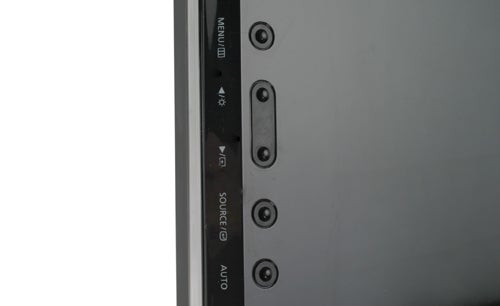 Shortcuts include brightness control, MagicBright presets (Custom, Standard, Game, Cinema and Dynamic Contrast) and input selection. Unfortunately we found input switching – whether manual or automatic – to be frustratingly slow, but that’s only an issue if you’re part of the minority that switch inputs regularly.


Anyone familiar with the OSD on a recent Samsung display won’t find any surprises here. Despite only using three colours it’s attractive, with informative icons and a logical layout. All the usual options are on hand, though there are a few Samsung-exclusive ‘Magic’ additions which are only found on its high-end TN-based monitors (we realise that’s an oxymoron). 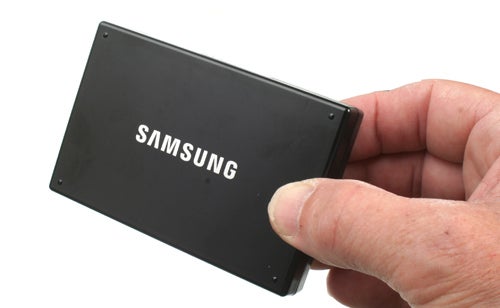 (centre)The monitor’s power brick is as slim as the screen.(/centre)

The most controversial of these is probably Magic Angle, a set of specially adjusted ‘view angle’ presets which alter picture characteristics to compensate for TN technology’s inherently poor viewing angle performance. While it’s nice to have if you usually sit in the same orientation to your display, it wouldn’t be necessary to begin with if a superior panel technology was used.


Magic Lux and Magic Eco, on the other hand, would make genuine enhancements for any monitor. The former controls the PX2370’s ambient light sensor that automatically adjusts backlight brightness depending on the amount of ambient light, while the latter lowers backlight brightness to permanent maximums, making an already frugal monitor (thanks to its LED backlighting) even more energy efficient. In fact, after calibration the PX2370 stayed below 19W, and activating the lowest Magic Eco setting of three brought this down to an impressive 12W average.

Ultimately though, what every monitor should be about is image quality, and here the 23in PX2370, with its Full HD (1,920 x 1,080) resolution, scores decently. There was some minor backlight inconsistency but no bleed, the latter of which is often the more distracting – especially in the black bands of widescreen films. Viewing angles were slightly above average, with less contrast-shift than found on most TN-panel monitors, so viewing with family or friends shouldn’t be a problem.


Greyscale differentiation was also good for this type of screen, and we managed to calibrate it so that even the darkest shades were visible – albeit at the cost of white purity and differentiation. This is a sensible compromise for the average user, as it gives you extra detail in films and games which tend to be predominantly dark. Speaking of detail, sharpness was also excellent, though it’s rare to find otherwise these days. 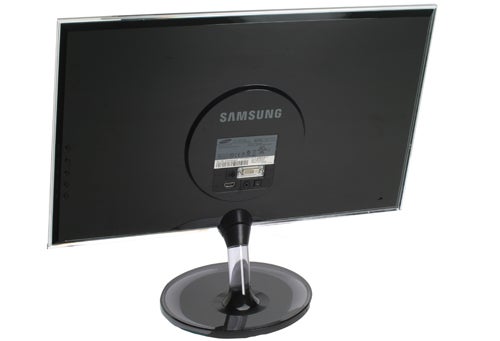 We found banding varied quite a bit depending on settings. At its best it was barely noticeable, while at its worst it was obvious across the board. Mind you, as this is mainly visible across large colour gradients it’s not something you’ll commonly notice in most real-world scenarios, and we wouldn’t recommend a TN-based display for image enthusiasts anyway.


This is all fairly encouraging, but there’s little doubt the PX2370 is expensive for what you get. Once again, Samsung is its own worst enemy, as £50 less than the £265 demanded by the PX2370 will buy you Samsung’s SyncMaster F2380M, the Full HD, HDMI-equipped 23in cousin of the award-winning F2080. Based on essentially the same chassis as its smaller 20in cousin, the F2380M should offer better build quality, full adjustability and far superior image quality, thanks to its use of a cPVA rather than TN panel. 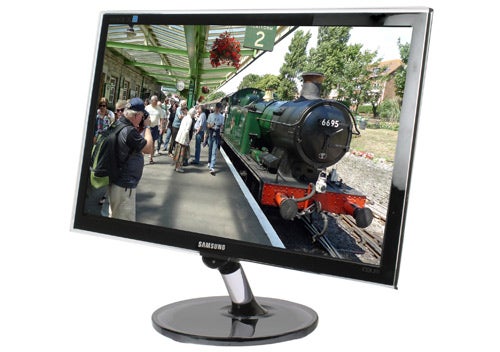 If energy efficiency is more important to you than image quality, the fully-adjustable SyncMaster BX2240 should have you covered for less than £200, while the SyncMaster P2370HD (a monitor and TV hybrid) has it solidly beat in the feature count. All this considered, the premium for its slimness is simply too high.


Aside from being one of the slimmest monitors we’ve ever seen thanks to its LED-backlighting, the Samsung SyncMaster PX2370 sports an attractive design, some nice extras and halfway decent image quality. However, if slenderness isn’t your main priority, it’s far too expensive to be desirable to any but the most well-heeled buyers.