You might remember, way back in the misty depths of 2010, we reviewed Samsung’s SyncMaster F2080 and came away rather impressed. In fact, the F2080 was a runner up for Best PC Monitor in our Awards 2010. Aside from its slightly slow response time, the only thing we didn’t like about it was its sub-Full HD resolution, a lack fixed by its bigger F2380 sibling. Well, that’s the screen we’re finally reviewing today. 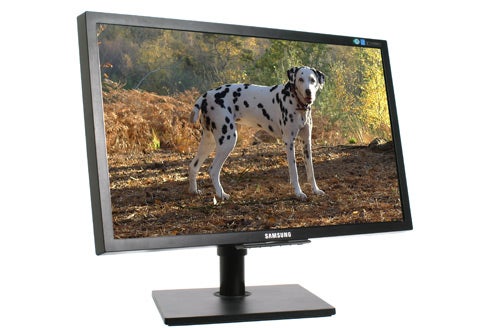 With full adjustability, a high-quality, 1080p, 23in cPVA panel, multiple digital inputs and, best of all, costing just a smidgen over £200, will this be another winner? When it came out there were no alternatives to inferior TN at under £300, but now there are a few options, such as the recent BenQ VW2420H, which offers an A-MVA panel combined with LED backlighting for well under £200. So let’s see how this Samsung holds up in today’s market.


Since the F2380’s chassis is essentially the same as that of the F2080, it’s no surprise that it’s just as easy to set up. Merely clip in the base, tighten a thumb-screw, and you’re good to go. Build quality of the stand is top notch, with the base being rugged matte plastic and the arm made of metal. The screen’s bezel is constructed from the same plastic as the base, but unfortunately its back is quite flimsy, displaying significant creak and flex. However, though disappointing it’s not really an issue, as all the bits that matter are adequately tough. 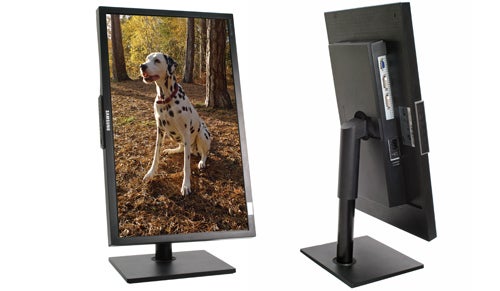 As far as looks go, the F2380 is unapologetically angular and matte black throughout, giving an industrial impression we’re rather taken with. It’s not only visually pleasing but much better at concealing dust and fingerprints, and prevents distracting reflections too.


Ergonomics are also excellent. Height adjustment is 5.5 to 18.5cm off your desk, there are generous amounts of tilt and swivel, and pivot is also on the menu. Adjustments are very smooth and, aside from pivot, can all be performed using just one hand.

Connectivity is also good. Since this monitor is part of Samsung’s ‘Professional’ series, it’s not surprising that there’s no HDMI, but you do get dual DVI inputs to cover all your digital needs. There’s also an analogue VGA port for hooking up older machines and netbooks. Samsung provides both DVI and VGA cables, and connecting them is easy as pie with the display pivoted. It’s also worth noting a physical power switch at the monitor’s back, which is always a welcome touch.

Controls are found in a small, central extension just below the lower bezel, demarked by a silver strip and subtle, white LED. Thankfully these are physical buttons rather than the frequently-problematic touch controls often found on more consumer-oriented displays. The main buttons lie neatly under you fingers and offer up crisp feedback. As well as menu navigation and VGA re-synchronising, they offer direct access to source, brightness and a customizable hotkey that is set to image presets by default, but can be set to anything you like. This latter is a great feature that we would love to see on every monitor.

Samsung’s largely monochrome OSD is also easy to navigate, and gives you full control over RGB, Tone, Gamma and even response time overdrive. Color Effect, meanwhile, lets you turn everything being displayed into shades of black & white, green or sepia, which is rather gimmicky but may be useful in seeing the effect of certain filters without the need for image editing software.

So far so good, but what’s the image quality on this affordable 23in cPVA monitor like? Surprisingly, it’s both better and worse than its smaller sibling. It offers up the same excellent contrast, meaning you see plenty of detail at both light and dark ends of the scale, and this without the help of any glossy screen finish.


Once brightness was turned down from its ludicrous 100 percent default, colour settings were again reasonably accurate out of the box, and here there was no sign of the banding we found on the SyncMaster F2080. Backlighting is fairly even, though there is some slight backlight bleed from the corners. 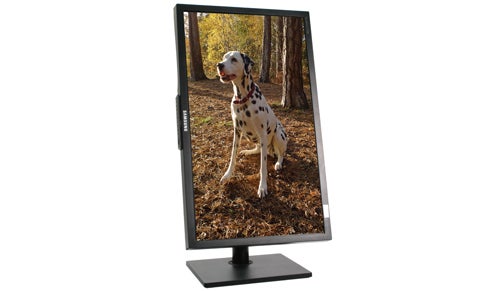 However, the one point where the F2380 is genuinely weaker than the 20in cPVA model we looked at previously is in its viewing angles. Though vertical viewing angles are faultless, subtle but noticeable colour shift occurs once you get past 60 degrees horizontally, and on some colours even the slightest move off-centre is enough. More worryingly, there is minor contrast shift when sitting fairly centrally in front of the screen.


Let’s just put this into context: even with these faults the F2380’s performance is still so far above most monitors using TN panels that it’s on a whole other level. Everything except response time is vastly superior, and as a productivity, multimedia, casual gaming and hobbyist photo display, this SyncMaster will do a fine job.Yet for hardcore FPS players and colour-critical work it’s not the best choice around. 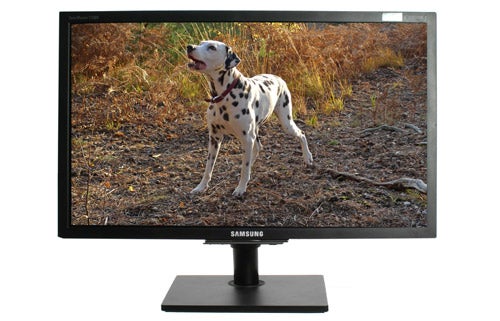 However, it’s worth bearing in mind that, at the F2380’s price point of just over £200, you’re not exactly spoilt for choice when it comes to quality, Full HD panels of 23in or larger. The IPS-based NEC MultiSync EA231WMi, for example, might give you superior image characteristics and more connectivity choices (including a USB hub, audio throughput and DisplayPort) but is also £100 more expensive.


The Samsung’s most likely rival, then, is BenQ VW2420H, which is available for as little as £180. You gain HDMI, audio through, and the energy-frugality and slimness that LED backlighting brings, as well as slightly superior viewing angles. However, you lose out on the adjustability, matte panel and finish, so it’s a matter of horses for courses.


Samsung’s Full HD, 23in SyncMaster F2380 doesn’t quite live up to our high expectations, but at around £200 it’s still one of the best monitors going.