Anyone who reads our monitor reviews regularly will know that usually you have two choices; either you get a screen sporting a ‘budget’ TN panel with mediocre viewing angles and lacking ergonomic adjustability, or pay significantly more for a far superior PVA or IPS-based display that’s actually usable for colour-intensive work. However, with its new Professional F-series range, Samsung aims to give you the best of both worlds. Sporting brand new Samsung ‘cPVA’ panels (Samsung won’t explain what the ‘c’ stands for, claiming it’s an internal reference), both of these fully adjustable, business-styled monitors purportedly offer impressive 178 degree viewing angles, incredible contrast and accurate colours, all for a price that wouldn’t look out of place on an upmarket TN.


We broke the news on this range in May of last year and were pretty excited. It’s taken a little longer than expected to get one in for review though and in the process the Navy moniker has apparently been dropped. 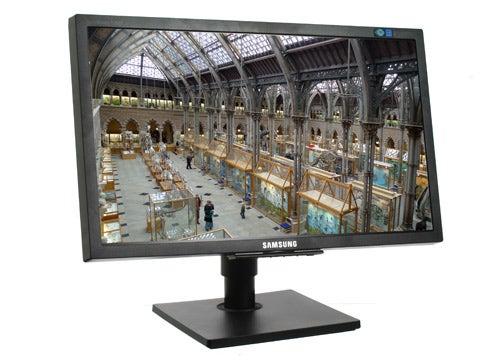 
From the moment you take the F2080 out of its box it’s obvious that you’re dealing with a display that’s on a different level to most. The monitor arrives in two parts which are easy to assemble. Just clip in the base and tighten the thumb-ring screw, and you’re good to go. Both the base and chassis are constructed using durable, matte and slightly textured plastic that obviously eliminates distracting reflections and unsightly fingerprints. The monitor’s neck, meanwhile, is made of metal, lending excellent durability. 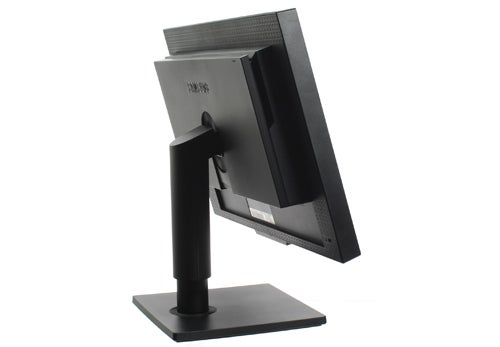 As already mentioned, the Professional F-series are as adjustable as you could wish. The F2080 is height adjustable up to 20cm off your desk, tilts about 30 degrees (five forward and 25 back), swivels by around 45 degrees to the left and to the right, and of course pivots too. All these adjustments are so smooth and easy that you can make them with one hand, and our only niggle is that the screen does tend to wobble when making them.


In terms of style, the F2080 comes across as industrial yet desirable. The shallow, square base matches the main chassis perfectly, and its sleek looks are helped by a thin 15mm all-round bezel which makes it great for multi-monitor setups. At the display’s back, hidden under a clip-on panel, you’ll find VESA mounts for both 100 x 100 and 200 x 100 standards. This offers great flexibility for attaching wall-mounts, arms and other accessories.

When it comes to connectivity it’s once again obvious that Samsung is targeting enthusiasts and professionals rather than the average consumer. There’s no HDMI to be found but twin HDCP-enabled DVI ports and a good old VGA connection are plenty for this type of monitor. There’s also a physical power switch, and the F2080’s pivot function makes plugging in the provided cables a cinch.

Below the lower bezel is a thin silver strip with dark-grey icons denoting the controls. These are physical buttons running along the strip’s base with Braille-like markings, making them easy to use even in the dark. Here you’ll also find a thin white LED strip, which aside from the round metal stand is the only curve to be found on the F2080. It’s very subtle and stylish, which is good since – surprisingly – you can’t turn it off. Though not an issue in a lit environment, in a darkened room it can be distracting, so it’s an odd choice on Samsung’s part – especially since the power LEDs on many of its multimedia monitors can be turned off.


Getting back to the buttons, they offer crisp feedback and are well-placed. First on the list is Menu, which also acts as a Back button. Next we have a button that functions as down in menus or can be customised to switch between MagicBright, MagicColor, Color Effect or Image Size (Auto or Wide), more on which later. The third button acts as a brightness shortcut or up in menus, while Source doubles as an Enter button. Finally there’s a dedicated Auto button next to the Power one, which we question the usefulness of on a high-end display such as this but is handy for those still hooking things up through analogue VGA.

Menus are just as understated as one would expect given the rest of this monitor’s aesthetics. Despite only being three-tone they’re attractive, well laid out and easy to use, and as you’d expect they offer a wealth of options. A rare but welcome feature is that the menu remembers the last main section you were in when you left it.


Picture allows you to adjust all the usual settings including brightness, contrast and even response time, the latter of which is important given that overdrive processing (the technology used to increase response time) can have a negative effect on image quality.


Color gives separate RGB settings as well as full control over Tone and Gamma, though not the traditional colour temperature presets which might be a bit off-putting for some. Then there’s the aforementioned Color Effect, which allows you to turn everything on your monitor Grayscale, Green Aqua or Sepia – we guess it could be fun in a presentation, or to quickly preview a colour effect without having to switch to an image editor.

MagicBright, meanwhile, offers a range of seven brightness presets, including Dynamic contrast and a Custom mode which allows you to adjust brightness and contrast to your liking. Despite its business rather than multimedia leanings, there is also an AV option which optimizes for video content and limits you to digital inputs. MagicColor ‘improves’ colours for entertainment material like films and games especially, and offers a Demo mode in which you can compare the effect applied across half the screen. Finally Automatic Source Selection is a welcome addition but you can turn it off if you prefer. 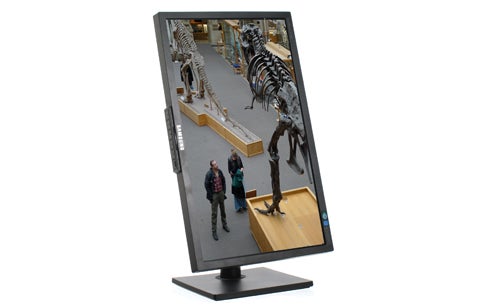 On first powering the monitor up, we were surprised by how well its factory settings were calibrated. In fact, this is one of the few monitors to land on our desks that we would be happy to use for non-colour-critical work out of the box. Aside, that is, from turning the brightness down from the usual 100 per cent; note to manufacturers, we don’t need our retinas seared out by default, thank you. A good indicator of this display’s excellent factory calibration was that even after using the Spyder3 Express colorimeter, settings changed relatively little from their defaults.


The F2080 continued to impress throughout our testing. There was no sign of any backlight bleed and backlighting was perfectly even. Unlike pretty much every TN-based monitor on the market and even some displays based on previous PVA panels, Samsung’s little 20-incher also breezed though our colour and greyscale tests. It displayed the subtlest tones with ease and managed simultaneous deep blacks and pure whites, lending some credence to the F2080’s claimed 3,000:1 native (15,000:1 dynamic) contrast ratio. Indeed, in this regard it’s easily one of the best-performing monitors we’ve yet come across. 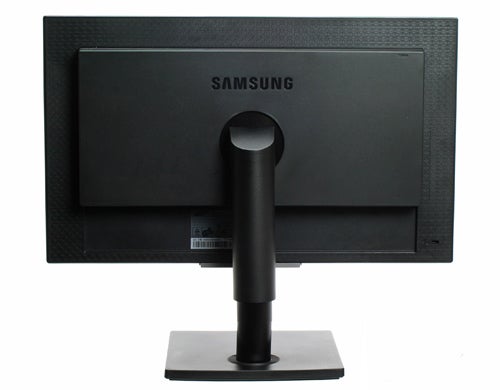 Sharpness was also excellent, as tiny fonts were perfectly legible with none of the red aberrations that afflict so many other models. Samsung wasn’t exaggerating too badly with its 178 degree viewing angles either, as aside from some very slight contrast shift at extreme angles they almost rival those of most IPS panel monitors, whether viewing from the side or above/below. So far, the F2080 is living up to its ‘professional’ classification, which is simply superb considering its budget price.

Unfortunately the F2080’s performance wasn’t quite perfect, however. Banding across gradients was present, though so subtly it’s unlikely to ever be much of a problem. A bigger concern regards response times. Samsung claims an 8ms response time for the F2080 which it dubs MagicSpeed, but while films were mostly fine we found there was some ghosting in fast games, even with response time acceleration set to maximum. Of course, this panel is aimed at colour professionals so it’s hardly fair to criticise it for this issue, especially since many semi-casual gamers are unlikely to notice. Still, we wish Samsung wouldn’t advertise ‘magic speed’ on a panel this slow.

Finally for true image professionals it’s worth noting that Samsung only states its monitor matches 100 per cent of the relatively lowly sRGB colour space and obviously it’s not wide-gamut, meaning that if you professionally work with higher colour spaces or require extended colours, you’re still better off looking elsewhere.


Nonetheless, the performance the F2080 delivers for its price is quite simply amazing. While not quite up to the professional standard its classification suggests, this is as close as we’ve ever seen a sub-£200 monitor get. If you have the extra cash to spare you’ll probably want to get the 23in F2380, available for around £230, which nabs you not only a larger working area but also a desirable Full HD resolution. However, for anyone who can’t afford the extra £60 the F2080 is well worth considering. 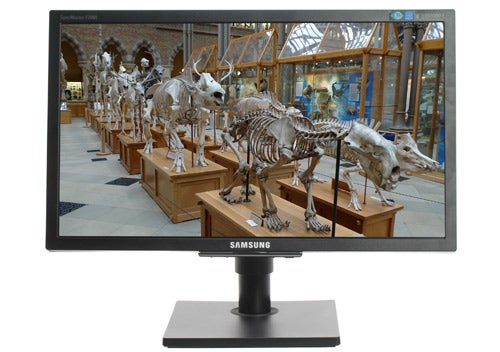 So who’s it for? Enthusiast photographers and budding digital artists on a budget, or just anyone who enjoys accurate colours, good contrast and excellent ergonomics but can’t afford the premiums this usually demands and can live with the lower resolution. Keep in mind though that while most films are fine (and indeed a pleasure to watch thanks to the aforementioned qualities), gamers should look elsewhere.


Offering quality that’s in a whole other ballpark to displays based on TN panels but at only a slight premium, the Samsung F2080 with its ‘cPVA’ panel is quite simply one of the best monitors available for its £173 asking price – both in terms of image quality and ergonomics. It’s just a pity that poor response times keep it from holding wider appeal.