Samsung has in recent years grown to dominate the both the TV and monitor markets, so if anyone should be able to do a good job at putting both of them together in one unit, it should be the Korean manufacturer.


If you’re strapped for space a hybrid makes a lot of sense, both practically and technically. After all, LCD technology was originally designed for monitors, before it advanced sufficiently for it to become practical for larger TVs. What’s more, ever since PC monitors began to offer a native 16:9, 1,920 x 1,080 resolution rather than 1,920 x 1,200 (16:10), the line between a TV and monitor display has blurred even further. 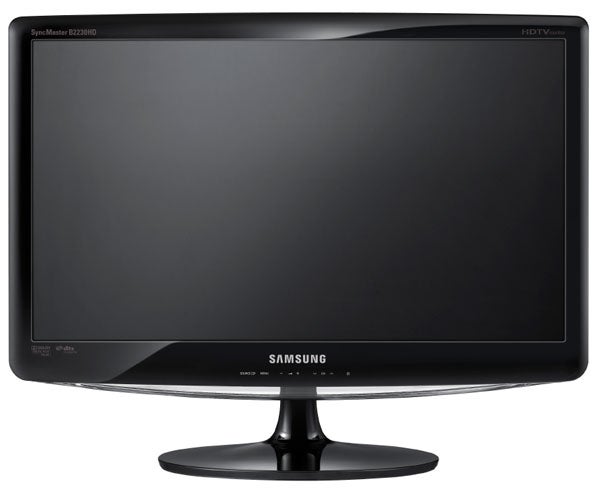 The SyncMaster B2230HD is billed as a 22in monitor, but actually sports a display size of 21.5in, for the pedantic amongst us. It’s certainly not the first of its breed we have looked at, and most recently cast our eye over the similarly-sized Samsung SyncMaster LD220HD TV monitor.. Meanwhile, on the pure TV side of things we looked at the 23in Acer AT2356 and 22in LG 22LU4000. However, this Samsung has some notable advantages over the LD220HD and an online price of just over £200, making it one of the more affordable of its ilk. So has Samsung again managed to bridge the gap between TV and monitor successfully?


Aesthetically, there’s no doubt that it’s a success. It’s clad in Samsung’s traditional shiny black plastic finish and the bezel’s curves are easy on the eye. The transparent curved edging with a blue light that projects down into it at the bottom is particularly stylish at this price point. 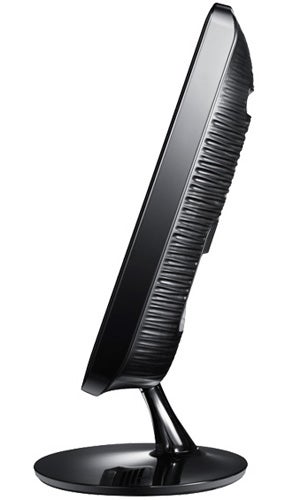 There are no physical buttons on the monitor, and we found the touch sensitive controls sometimes unresponsive – so instead we relied on the rather plasticky but functional remote control. The OSD display is large and illustrated with colourful icons – it’s clearly designed to be used at a distance and does involve a lot of scrolling up and down.


The B2230HD is arguably a little on the porky side compared to some designer monitors and many LED-backlit models, but considering it has to pack in a lot of TV-related connectivity, it is reasonably proportioned. It weighs in at 4.91Kg and Samsung has thoughtfully built a handle into the rear of the chassis, making it easy to pick up and carry.


Setting up the screen couldn’t be easier – you just pop the stand into the oval base, slide the screen into place on top, and then tighten it all down with the screw underneath. Of course, for the price you wouldn’t expect any kind of height adjustment, though you can angle the display back 20 degrees and very slightly forward. It also has VESA mounting capability if you want to secure it to a wall, and there’s a Kensington lock hole at the rear.

Connectivity is fair. Since it lacks a DVI port, you’ll need to use one of the two HDMIs if you’re hooking up a computer, leaving only one digital connection free for consoles and set top boxes. As an alternative there is a VGA input, though as we’ll get to later, this is best avoided. Another HD input is via Component.


While its tuner is theoretically HD capable, the B2230HD is fitted merely with a DVB-T, rather than DVB-T2 tuner, so you won’t be able to receive Freeview HD broadcasts – just standard-def Freeview, which is a shame. There is a Conditional Access Module available though, so you will have access to terrestrial TV pay options. The only strictly standard-def input is the single RGB capable SCART input. 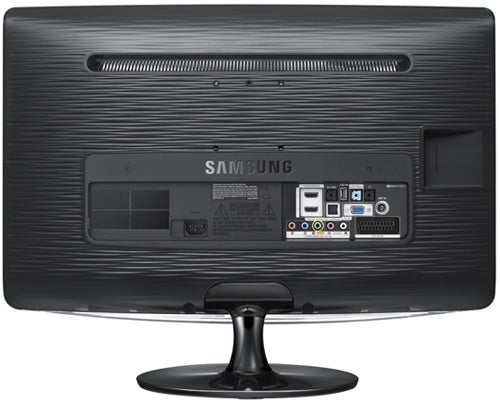 You’ll also find a single USB input, which pleasingly is media compatible. The manual states that it only supports flash storage and not USB hard disks, but it worked for us with a USB stick and a Toshiba portable hard drive. From both we were able to smoothly play Divx-encoded AVIs, MP4 and MKV formats, as well as display pictures and MP3 files – though it would not recognise Apple lossless files. Aside from this and RMVB though, nearly every video format is supported, including ASF, MP4 and WMV, while picture support includes Motion JPEG and on the audio side we have MP3 and LPCM.


In terms of audio connectivity there’s a 3.5mm line-in, a headphone socket, and both optical and analogue audio outputs. Finally, there’s also an ExLink port that enables you to remote control your monitor/TV via RS-232, should you wish to do such a thing with a 22in display.


When you plug in and connect up the monitor it automatically turns on with an accompanying audio chime. Feature wise, the Picture-in-Picture mode only works with the TV aerial and another source – you can’t mix and match inputs. You can at least choose which image has audio, the size of the box and in which corner you want it though.

There are three ‘MagicBright’ presets, Standard, Movie and Dynamic, and one quirk we noticed is that when it switches input it automatically defaults to the Dynamic picture preset, which needs to be looked out for as this tends to deliver a picture that’s a tad overcooked. Also in the feature set is an eco-mode, which simply reduces brightness.


Our initial testing began by hooking up to a laptop via the VGA connection – and this did not provide a favourable impression. Using this connection colours were simply all over the place, and the red background of the tabs in our chosen theme for the Chrome web browser were so far off we could hardly make out the text. Whilst there was reasonable sharpness, whites were also way off and colours in our test photos looked positively psychedelic.

Switching to the HDMI connection, things immediately improved. Colours were bright and punchy and even approached accuracy – as in greens actually looked green and red did a fair job of impersonating red.


However, a quick run of our Lagom test still showed major issues. The Movie preset was the most accurate, but was still blowing out the highlights in the RGB scaling unless we severally reduced the brightness, which in turn crushed the blacks. Raising brightness again we could see that first step caused all detail to be lost at the top end.


Black levels were a real low point, with very few of the blocks visible in the standard test. Viewing angles were also revealed to be poor, with significant colour shift when viewing from the sides. Samsung offers up a Lean Back Mode, with two settings, and we found that the first one offered a small improvement when viewing above or even on front of the display – but we emphasise that the improvement was small.


We then hooked up to a number of sources to try out the display with real-world content. First up was the TV tuner, and while the EPG proved easy to navigate, the standard def Freeview image quality was (unsurprisingly) quite soft and full of compression artefacts.


Moving to Sky via RGB Scart delivered an immediate step up, with stronger colours and less noise, and when we hooked up a HD source the panel began to show off some positive qualities. Sky HD, for example, offered a very watchable, crisp picture, and while the contrast and black levels prevent any sort of depth emerging from the image, the fact that the picture is relatively small helps to hide this shortcoming. Moreover, skin tones look good and colours are even-handed. 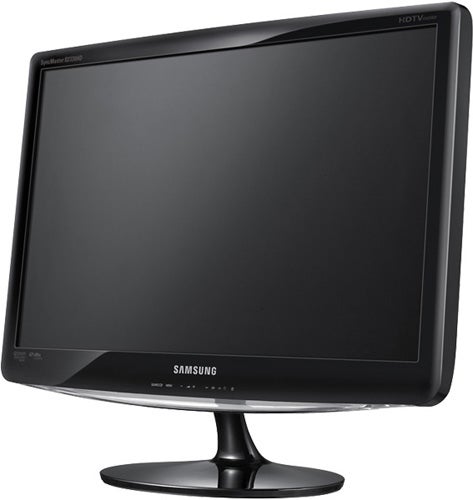 Connecting up a Nintendo Wii via Component, the vibrant colours of Wii Sports Resort came through easily. Motion was handled very well, with no visible sense of lag regardless of input.


Finally, we have to admit to being quite surprised by the sound quality, which was better than expected. It’s loud enough to fill a small room, and was never distorted or boomy – all the more impressive as the speakers are invisible inside the sleek chassis.


Summing up the Samsung SyncMaster B2230HD, when you consider its relatively low price, it’s hard not to use the phrase ‘you get what you pay for’ (though if that were always true, there would be no point to reviews). In fact, were it to be judged purely as a TV, we would deem the Samsung to be a decent enough offering. It delivers bright, smooth and watchable pictures, with its major deficiencies in contrast and black level hidden to a degree by its small size. These issues become even more noticeable when used as a monitor, and the poor quality VGA connection doesn’t help.


This means we would certainly not recommend this display for anyone who is serious about image quality. It strengths lie not in text or graphics work but in bright games, where its strong colours, even tone and smooth, lag-free motion work in its favour. Its USB media playback also gives it an interesting advantage against older but cheaper models such as the award-winning Samsung SyncMaster LD220HD.


With its stylish design the Samsung SyncMaster B2230HD looks the part and offers much, with its plethora of connections and media playback. However, despite its flexibility, it’s guilty of the old adage of being a jack of all trades but master of none. For casual TV viewing from a high-def source, and for gaming and occasional computer use it can be deemed acceptable, but for more dedicated use, we’d look elsewhere.