Back in May 2005, Benny reviewed the Dell 2405FPW 24in monitor and has been lusting after it ever since. Not only was the Dell a great monitor with a killer 1,920 x 1,200 resolution, but it also had a price as unstable as nitro-glycerine. When Benny reviewed the Dell it was listed at £860, but that price jumped up to £1,200 a few days later, but then dropped down to a staggering £603 a few weeks after that. Recently though, the price seems to have settled down and Dell is currently selling this screen for £942.35. It’s probably a good thing that the price of the Dell 2405FPW has finally stabilised, since it now has some serious competition. 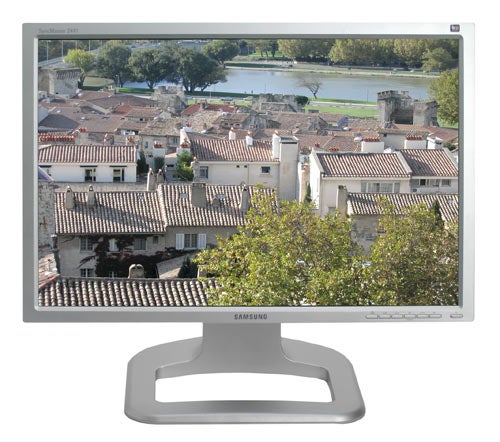 Like the Dell, the Samsung SyncMaster 244T is a high-specification TFT monitor with a 24in widescreen panel, and also like the Dell, it sports a 1,920 x 1,200 resolution. However, the Samsung uses a newer panel than the Dell and manages a response time of 6ms, compared to the 16ms seen on the Dell. That said, Dell has announced a new 24in display in Japan which sports a 6ms response time – I’m assuming it will use the same panel as this Samsung.


As well as having a lower response time, this new Samsung has one vitally important feature that the Dell didn’t have – HDCP support. Yes, the DVI port on the Samsung 244T is HDCP compliant, so you’ll have no problem playing back HDCP protected HD-DVD or Blu-ray discs. It also means that protected video under Windows Vista won’t be a problem either, since that will also require HDCP support. Of course we still haven’t got HDCP compliant graphics cards, but considering that a good monitor – especially one this size – should last you a long time, the HDCP inclusion should give you some real peace of mind. 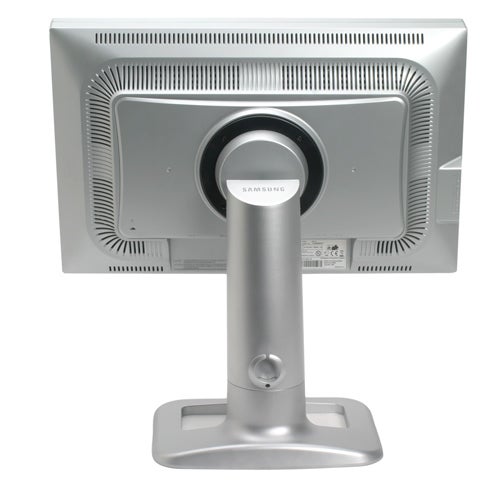 Despite the 244T sporting a 6ms response time, Samsung hasn’t degraded the image quality by using a 6-bit panel. Many of the low response time monitors available employ 6-bit panels to help achieve the faster switching, but the 244T uses an 8-bit panel, so it can produce the full 16.7 million True Colour gamut. Considering that a high resolution screen like this is ideal for image editing, the last thing you would want is a reduced bit depth, but the fact that Samsung has still achieved a very low response time means that the 244T is great for games and movies too. Of course the 6ms rating is a grey to grey measurement rather than off-on-off, but to be fair, pretty much every manufacturer quotes grey to grey times these days.

The 244T comes in two flavours; black and silver – Samsung sent me the silver model for review. Personally I prefer black monitors, but a black display won’t conform to the TCO ’03 standard, whereas this silver model does – the black version is only TCO ’99 certified. That said, the older TCO standard would never put me off buying a monitor.

Despite housing such a large panel, the bezel surrounding the screen is very slim, which makes the display look even larger than it actually is. In the bottom right corner are control and power buttons. The menu button brings up the OSD, while the up and down arrows allow you to navigate the menus – the up and down buttons also double as shortcuts to the MagicBright settings and brightness control. MagicBright offers preset brightness levels called Entertain (presumably for watching movies), Internet (for browsing) and Text (for office applications) – there’s also a custom setting, which I configured manually and never switched from. The Select button also doubles as a source switcher when not in the OSD, while the Auto button will auto-adjust the screen when using an analogue input. The final button is Picture in Picture, allowing you to keep an eye on one source, while you’re using another.


Talking of sources and inputs, the 244T is pretty well stacked. As well as the HDCP compliant DVI port, there’s an analogue D-SUB port. Xbox 360 owners will be happy to hear that there is a set of component video inputs, while composite video and S-Video ports are also in evidence. There’s also an integrated USB 2.0 hub with one upstream and two downstream ports – this is particularly handy if your PC is on the floor under your desk. Considering the high-end nature of this monitor I would have liked to have seen dual DVI ports, at the expense of the D-SUB port – as long as one of them was a DVI-I port, it could accommodate an analogue signal as well as a digital one. 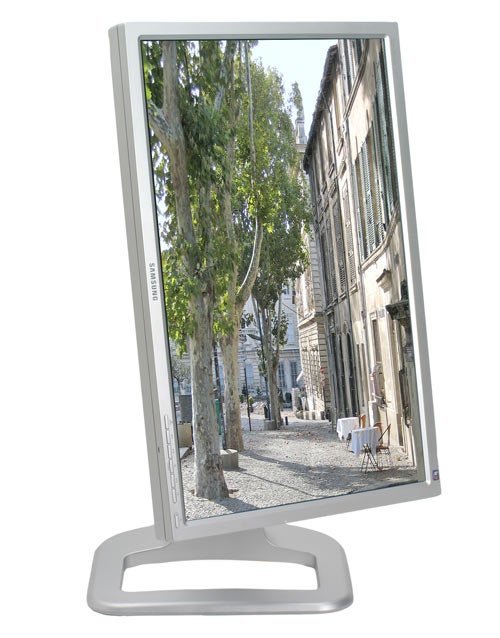 The screen is mounted on a central column that expands out to an oblong footprint on your desk. There’s an impressive range of vertical movement – it’s also nicely dampened, allowing you to move the screen up and down with the force of one finger. The screen will pan just as easily on the column too, while to top it all off you can even pivot the display. Samsung has even ensured that users don’t accidentally smash the screen into the desk when pivoting it – you need to raise the screen above a certain height before you can pivot it. The downside of this safety feature is that you can’t then lower the screen down to desk level when it’s in a portrait orientation. That said, you’re more likely to be using the portrait mode for some kind of presentation, unless you want to get a sore neck while craning to see the upper half of the display.

When it comes to image quality, the 244T is one of the best LCD displays I’ve seen. In general use the image is pin sharp with vivid, but not oversaturated colours. Editing images using Photoshop is an absolute joy on this screen – not only because of the high resolution, but also because the colours look natural and there’s no detail lost in low or high contrast areas. 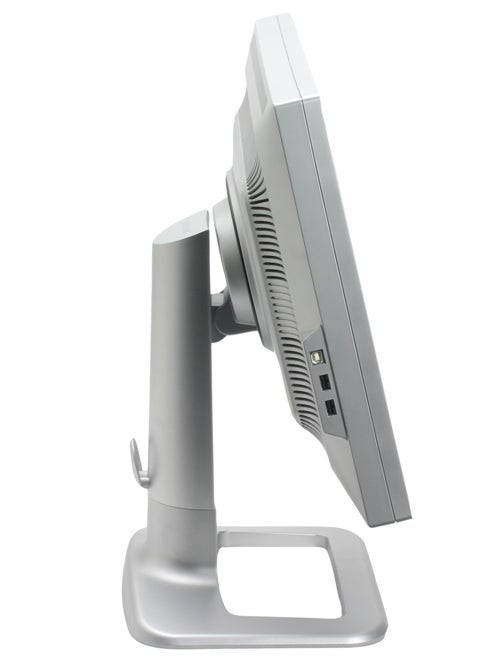 Video playback was also first rate, which is great considering that this screen can handle a True HD 1080p signal. Firing up a selection of 1080p QuickTime trailers was awe inspiring on the 244T, although you really need h.264 acceleration in your graphics card for smooth playback. Likewise, playing games on this screen is just amazing. Again, you’ll need a pretty beefy PC in order to run the latest games at 1,920 x 1,200 with any image quality settings enabled. That said, if you’ve got enough money to buy a high-end PC with a cutting edge CPU and twin graphics cards, you really should shell out for a screen like this to make the most of the rest of the hardware.


DisplayMate just confirmed my initial opinion – that the image quality on the 244T is superb. Looking at the 64-Step Greyscale screen showed a pretty much perfect image – every step was resolved without the slightest hint of compression at the high or low intensity edges. There was also no pink or green tinges seeping into the mid-range greyscale – something that affects a fair number of LCD displays. Meanwhile the 256 Intensity Level Colour Ramp showed a silky smooth gradation from high intensity to low – again many screens struggle here and show evidence of banding and stepping. The 256 Intensity Level Ramp was equally as smooth and again there was no hint of colour seeping into the mid-range greyscale. The 244T made short work of the Colour Scales test too – every single step was displayed without any hint of compression, while every colour dropped off uniformly to black on the very last block. 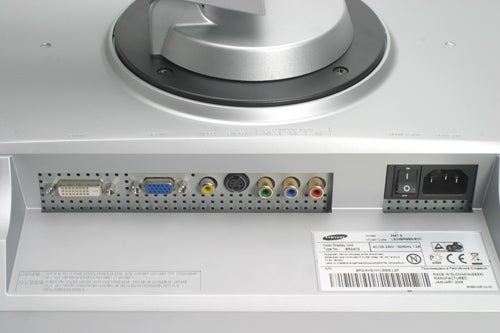 Text resolution is also top notch on this screen with 6.8 point Arial font clearly resolved and completely readable from a normal sitting position. Even at varying intensities text is easily readable, whether black on white or white on black. Basically, if like me, you do lots of document creation, you will love this monitor. 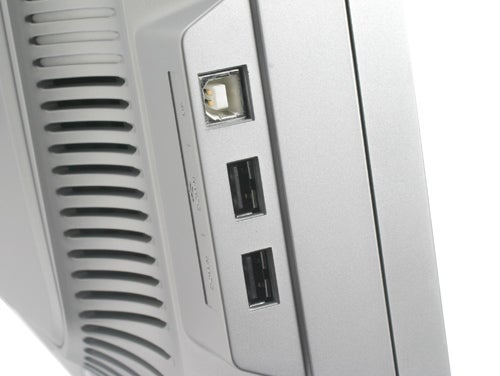 In the box you’ll find the monitor itself, a D-SUB cable, a DVI cable, a power cord, a USB cable and a component video cable. There’s also a paper quick setup guide and a CD with the user guide and various setup utilities, one of which is a rotation program for the pivot function. Although most graphics card drivers have a rotate function integrated into them these days, it’s still good to see that Samsung has bundled everything you need in the box.


As I mentioned at the beginning of this review, the Dell 2405FPW was the best 1,920 x 1,200 monitor to have graced the TrustedReviews lab, but not anymore, especially considering the price of the SyncMaster 244T. I managed to find the 244T on sale for £835 including VAT, which makes it over £100 cheaper than the Dell! Considering the price, the image quality and the connectivity options, the Samsung SyncMaster 244T is a pretty compelling option for anyone that wants a high resolution, widescreen monitor. 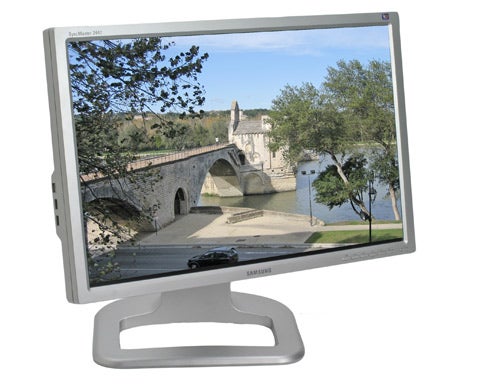 
The SyncMaster 244T is the best high resolution LCD monitor I’ve seen at a great price. Yes, if you are VERY serious about image editing, you’ll probably look at a monitor like the Eizo ColorEdge CG220 or the NEC SpectraView Reference 21, but you’ll be paying over three times as much for either of these. For all but professional image editors that demand a colour calibrated display, the 244T is ideal for Photoshop work.


The resolution of 1,920 x 1,200 is as high as you can go with a single-link graphics card, and that should be more than enough for most users. If you have a fast enough PC, gaming on this screen is an absolute joy. But if you’re like me and have loads of Windows open during your working day, you’ll love the desktop real estate that the 244T gives you. Basically a fantastic all-rounder at a great price.