The SyncMaster 226cw is one of those monitors whose high price makes it immediately obvious that this is not another run-of-the-mill addition to the already overcrowded 1,680 x 1,050 22in market. You see, the relentless race for the fastest LCD millisecond response times seems to have stabilised at 2ms (a figure the 226cw sports too), and now there’s a new horizon that seems to have captured the popular imagination, and thus manufacturers’ budgets: wide colour gamut.


Wide colour gamut is by no means a new technology, being present well before the HC upgrade to Dell’s 2407WFP pushed it more into the mainstream. Unfortunately, most manufacturers quote their figures in the NTSC gamut, which is far less extensive than the AdobeRGB colour space. But anything’s better than nothing, and wide colour gamut monitors are slowly making their way into the enthusiast entertainment section of 22in monitors, claiming a better experience for gaming, movies and casual photo-editing. 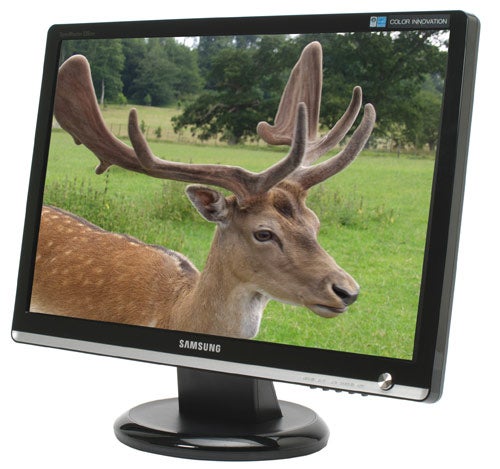 Wide colour gamut is no longer limited to the more expensive IPS and PVA panel technologies, and is filtering down to TN. We saw a rather impressive example of this with the professional-orientated ViewSonic VP2250wb, which covered 102 per cent of the NTSC space. While the monitor we have before us today does not boast quite as high a figure, at ‘only’ 97 per cent, let’s hope it still manages some of the improvements over traditional TN the ViewSonic has led us to expect.


Unusually for Samsung, the quick guide to attaching the stand is definitely not the best, as poor print quality makes some of the black and white images difficult to distinguish. It’s a good thing that it’s so easy to set up then. Samsung has (sensibly) dropped its hideous ‘ball-and-socket’ system we saw on its SyncMaster Pebble range, and in this particular case all one needs to do is clip the base in and tighten a screw (which can be done by hand, no tools required). Thankfully, the company has not given up on its policy to include a soft cleaning cloth. 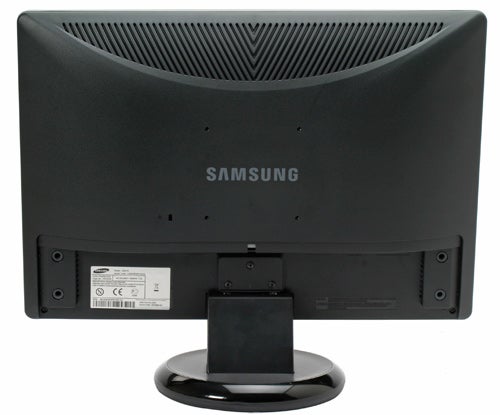 But any joy at these positives is immediately tempered when we come to the included video cables, of which there are exactly one: analogue VGA. Many words spring to mind, most of them NSFW. The most pressing one is ‘why?’. Why make the consumer have to go and purchase an extra cable? More importantly, why cripple your monitor’s quality out of the box? We have seen another example of this recently with BenQ’s V2400W, but that was more forgivable as the BenQ was not a wide colour gamut screen and favoured looks over image quality.


Though if looks were all we had to go by, Samsung would already be onto a winner with its 226cw, as this really is a gorgeous screen. The bezel and edges of the monitor are all mirror-finish piano black, apart from a white-silver inset along the bottom edge. The only visual spoilers are the usual Samsung logo in white, the model number on the top-left corner, and two fairly modest stickers. The power button is a striking metal affair with a subtle blue glow illuminating it from the bottom, while the stand is a pleasing mixture of matte and glossy plastic, and the back consists of a single, textured black curve.

Unfortunately, adjustability seems to once again have been left by the wayside. There is absolutely no swivel, height adjustments or pivot, and only the barest tilt, which is not even easy to operate. This would be disappointing on any monitor, but especially on one that might potentially have appealed to hobbyist/amateur graphics and photo enthusiasts. Also, attempting to tilt the monitor brings to light another slight issue, which is that build quality is not as solid as even most other SyncMasters, with some noticeable creaking.


Moving onto the OSD, it’s the typical Samsung affair with clear icons but drab colours. This is one area where I wish more manufacturers would emulate Dell, with its colourful menus as seen on the recently reviewed UltraSharp 2408WFP. In terms of usability, the 226cw’s menus are average: not particularly intuitive but never confusing. The buttons are really easy to use because, though they are not visible, their labels are clearly marked in the silver section beside the power button. Another touch I personally appreciate is that the 226cw is one of those relatively rare monitors that actually remembers its previous menu location when you re-enter the OSD. 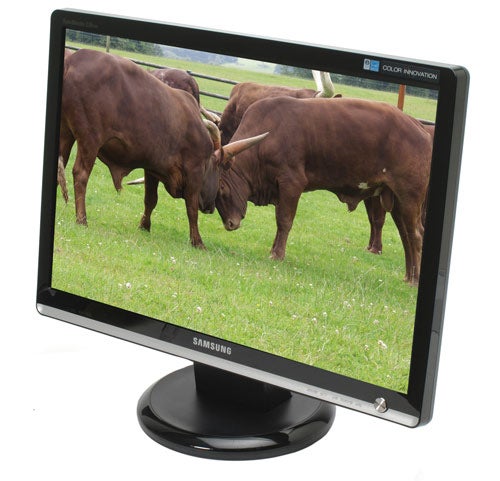 There is a dedicated source-selection button to switch between the two inputs (HDCP-enabled DVI and analogue VGA), one for brightness and a MagicBright button for various presets (Custom, Text, Internet, Game, Sport, Movie, Dynamic Contrast). Why dynamic contrast justifies its own mode separate from Game, Movie and Sport is anyone’s guess, since those are really the only scenarios where you are likely to want it, but the other modes are sensible and appear to be well-configured. Also, as on any wide colour gamut monitor worth is salt, it’s possible to turn overdrive (in this case called Response Time Acceleration) off.


Samsung does include a feature that’s supposed to make its OSD redundant -to the extent that all adjustments can be made under Windows through software called MagicTune. MagicTune is a Samsung-exclusive application that helps you to optimally set-up and fine-tune your SyncMaster monitor. However, we couldn’t get the version on the included CD to run on two different Vista machines, while a newer download caused incompatibility warnings.

Starting image quality off on some positives, the SyncMaster 226cw features a very even backlight distribution. There is nary a hint of backlight bleed, except towards the bottom centre of the screen. It also made short work of our DisplayMate tests, differentiating well between subtle colour gradients, and managing to distinguish between the brightest whites and darkest blacks simultaneously – a test many TNs fail.


This is the main area where the 226cw would justify its price, were it not for some significant downsides. Surprisingly, considering the otherwise excellent tonal performance, there is some noticeable banding across darker shades. More damningly, this SyncMaster suffers from quite poor horizontal viewing angles, with obvious colour shift – especially a pink haze that comes to dominate whites – when moving off-centre. The upside is that as long as you are in the sweet-spot, this is not an issue.

Office use is pleasant, offering a comfortably ‘dim’ text mode where fonts don’t lose any of their clarity or sharpness. The main caveat is again the lack of height-adjustment, or any other adjustment for that matter. Since the SyncMaster 226cw’s minimal adjustability doesn’t make it particularly suitable for professional use, we decided to give it a thorough run-through in games and movies, where its 1000:1 native (3000:1 dynamic) contrast ratio and various entertainment profiles ought to make it a worthy contender – and are glad to say that overall, it is.


The dynamic contrast implementation is very unusual in that there is no provision to turn it on or off; instead its activation is preset specific. But thankfully, in a marked improvement over the dynamic system on Samsung’s previous 22in Pebble 2232BW, and like LG’s alternative with its recent Flatron L206WU, it really does enhance the experience, making the 226cw’s decent blacks even deeper without noticeable loss of dark detailing. 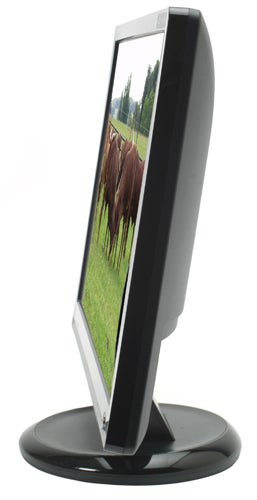 For movies, this is a very good display, as long as you keep in mind the limited viewing angles. Detailing is sharp, colours are vibrant enough without being oversaturated, and counting in the captivating blacks, this is definitely one of the better TNs. The ‘movie’ setting makes images slightly warm, but I like the effect. If you prefer something cooler, go for ‘sports’, which offers a more accurate colour reproduction. The only niggle is that Samsung doesn’t manage to avoid the shimmering effect that plagues so many LCD monitors with film material.


However, the one area where the 226cw excels is in games. With overdrive turned on there is no visible ghosting or tearing, and all the advantages that help make it a good movie display make it great for gaming, especially as the shimmering and viewing angles are no longer factors. If you want a 22in to game on, this is definitely one of the better choices, as it will show you every single detail, including subtle colour tints you might not have noticed before. Though at around £230, you do pay for the privilege.


For the consumer interested in colour work or a rugged, versatile display, the SyncMaster’s biggest problem can be summed up in two words: ViewSonic VP2250wb. The ViewSonic offers far superior ergonomics and viewing angles, better build quality and a USB hub, as well as an even wider colour gamut. But the Samsung does have sleek looks, a lower price and significantly less backlight bleed in its favour. 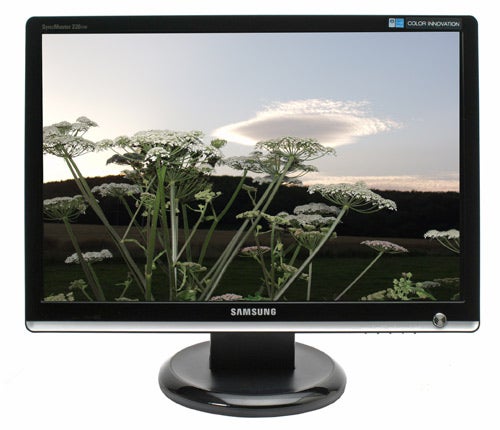 It’s also worth keeping in mind that the BenQ G2400W offers a larger screen (albeit with a similar lack of adjustability), the capability to display Full HD video and more inputs for a similar price. Of course it doesn’t offer as much detail, black depth or richness of colours, so you have to decide according to your priorities.


The good news is that Samsung’s attractively-styled SyncMaster 226cw offers a rich and subtly differentiated colour palette and excellent contrast with deep blacks and pure whites. The bad is that it suffers from narrow viewing angles, some banding in dark tones and a complete lack of adjustability apart from tilt, which turns it from a good monitor into a merely average one. Surprisingly, its main strength is as a PC gaming display, where the high price can be somewhat justified by a vivid and extremely detailed experience.