Samsung certainly looks to be staying at the cutting edge of design. Its daring new crystal ‘touch of colour’ black rose televisions, like the Samsung LE32A656 32in LCD, are proof of this. In fact, this design is proving so favourable that it is being implemented in its monitors, like the T200 (of which a review is coming soon!). With red and orange all the rage these days (for another example just take a peek at LG’s Scarlet TVs), it’s easy to forget that plain old black can still make for a timeless look to be reckoned with.


That’s exactly what you get with the Samsung SyncMaster 225uw. The moment I took this monitor out of its box, I was in love. Maybe it’s because of the dearth of monitors that aren’t afraid to be square, but the 225uw’s chunky yet stylish profile instantly appeals. Yes, the corners are curved a bit, but the whole thing just looks like a solid slab of pure coolness. This is the kind of monitor you might expect to find in the film ‘Equilibrium’, to match the daunting architecture. 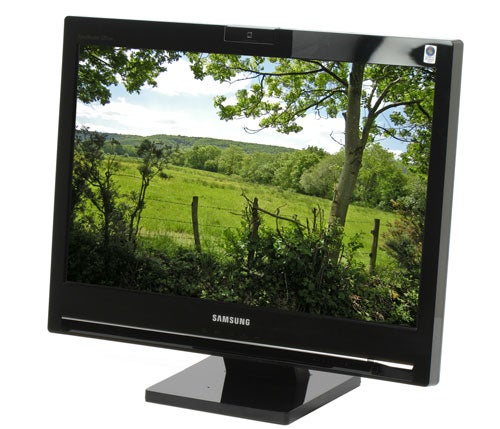 Though Samsung refers to it as ‘lacquered’, the 225uw’s finish consists of a similar high-gloss piano black to most of the competition. Thanks to a combination of clean, broad lines and a complete adherence to a single coating, it manages a sense of class many others lack. No inlays, strips or bases in other materials to be found here; the only exception being a very slight, narrow silver ridge set in the lower bezel, which enhances rather than detracts.


The 225uw’s sense of solidity is helped by a not inconsiderable weight of nearly 8Kg, though build quality is not as reassuring and the 225uw creaks audibly when any pressure is applied. The monitor comes in one single piece, so no assembly is required. However, you can detach the stand for wall mounting, and it is compatible with any 100mm x 100mm VESA mount. The stand itself is again a flat square, and feels eminently solid. The 225uw offers no swivel, height adjustment or pivot (though a very generous amount of tilt), but that’s somewhat forgiveable considering this monitor brings some unique features to the desk.

On the back of the display you’ll find a USB connector in addition to the usual VGA and (HDCP compliant) DVI ports. In addition to carrying data to a two-port integral USB hub, it powers all the SyncMaster 225uw’s extra features. It carries audio to twin 1.5W hidden speakers, supplies the 3.5mm microphone and headphone jacks, and drives a 2.0 Megapixel web camera and built-in array microphones.


The 225uw’s panel specifications certainly seem low-key compared to most other 22in TN monitors on the market. A 700:1 contrast ratio doesn’t sound very impressive when compared to the 10,000 dynamic figure claimed by the LG Flatron W2252TQ we reviewed previously, while a 5ms response time seems positively pedestrian. But here one needs to keep in mind two things: first, that the 225uw is oriented mainly towards business users, and second, that these could well be real specifications, rather than over-inflated marketing specs.

So, let’s see how the 225uw works out in use. Ergonomically, the lack of height adjustment is probably the SyncMaster 225uw’s biggest failing. To make up for it, Samsung has implemented some of the easiest cable connections you’re likely to find on any non-pivoting monitor. This is because the ports at the back (including power) are angled out, rather than down, making them simpler to see and connect. The one disadvantage is that cables protrude from the back a bit more than usual, but on the other hand this also makes them easier to keep tidy.

The headphone, microphone and powered USBs, meanwhile, are located on the left-hand side of the monitor for convenient access, where they are discreetly hidden behind the bezel. Of course an integrated webcam will never offer the placement flexibility of a stand-alone model, but it does save space and wires. In a nice touch, the web camera rotates inward when not in use, preventing dust or dirt from getting on the lens. 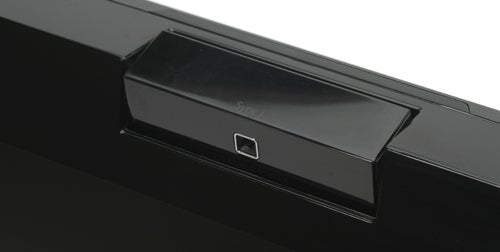 However, this is also a potential weakness. On our sample the hinge was loose (possibly due to previous use) and it was difficult to make the camera maintain its position. Camera quality is acceptable for the resolution, with sharp static images and, disappointingly, some blur over moving shapes. The dual array microphone is more impressive, picking up my voice clearly at a distance of over a metre despite ambient noise.


The speakers are actually slightly better than what you would likely expect considering their rating. At about half their maximum volume they don’t distort too much, and they’re capable of a modicum of base and treble. Most importantly, they’re adequate for voice material, which is their intent. Together with its audio ports for non-intrusive office use, the SyncMaster 225uw makes for a complete communications device. 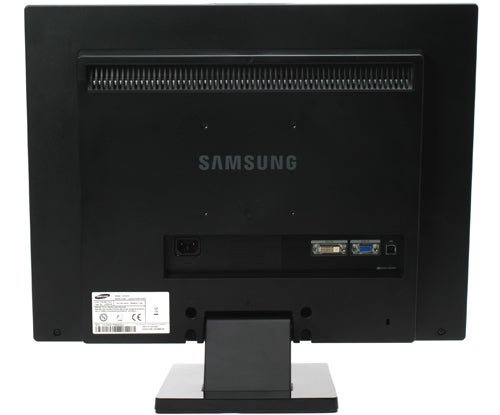 Moving on to the OSD, a major point of annoyance is that it appears to be impossible to switch off the menu’s beeps. This is especially aggravating in a piece of hardware intended mainly for the office, and is not the only irritation. Unlike the fabulous implementation on the Toshiba Satellite A300-177 notebook, here the touch-sensitive buttons once again live up to my generally low expectations by being awkward and inaccurate. I understand Samsung wanting to keep the bezels of its display clean, but in this case buttons could easily have been mounted out of sight in the gap beneath the silver ridge.


As things stand, you have to apply the entire surface of your finger-tip to an area just ”above” the actual icons on the bezel to get a response. And be sure to release in time, otherwise you’ll accidentally move down five steps instead of one.


Overall, the 225uw’s OSD is quite similar to that on the Samsung SyncMaster 226cw, except it lacks the options for dynamic contrast or overdrive, since this office monitor does neither, and due to its communications emphasis, the usual brightness/contrast button is replaced by a volume shortcut.

Having just criticised its touch-sensitive controls, I am obliged to mention that the 225uw’s power button is a notable exception, as it is almost too easy to use. It consists of a wider strip cleverly integrated into the aforementioned silver ridge, with a very modest little blue LED beside it. Not only is this power strip a design success, but even the lightest touch anywhere along its large surface will activate it.

Naturally, image quality is still the paramount factor in even a multi-function display, and here I found the 225uw to be generally good. To get the biggest negative out of the way, the monitor confirms its low contrast rating by completely failing to distinguish subtle whites or blacks. There was also some brown tinting over specific grey shades and slight backlight bleed from the lower bezel, though none of this makes this Samsung unsuitable for its intended use, or prevent you from enjoying the occasional film or game.


In general, colours are a bit more accurate than usual (as long as you leave the MagicColor system turned off), since even in Samsung’s Movie mode they are not as over-saturated as we often find on TNs. Sharpness is good, and even small text is perfectly legible. Viewing angles are also a slight bit above average for a screen based on TN-technology – not that that means they’re particularly note-worthy. 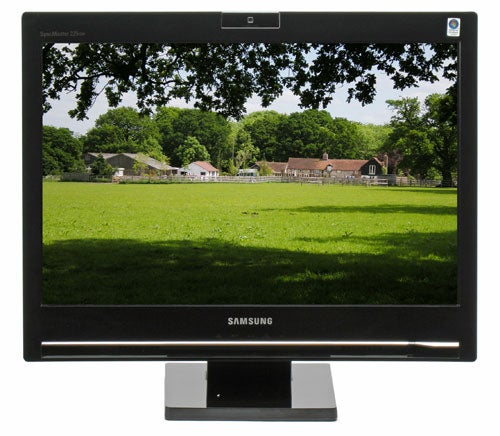 In terms of competition, the SyncMaster 225uw instantly distinguishes itself from other 22in monitors sporting webcams by stepping up from the usual 1.3 to 2 Megapixels, though if you want a quality feed you’ll still have to buy a separate web-camera. The above-average integrated microphone and multiple inputs all running from a single USB connection are also impressive, and while the panel is not going to win any prizes, it’s more than capable for its intended purpose. But at around £240, it does charge a premium for its features.


Aimed primarily, though not necessarily exclusively, at the business sector, Samsung’s SyncMaster 225uw combines all the features necessary for virtual office communication in a stylish 22in monitor. Sadly, its average panel and high price mean you’ll only want to consider it if you specifically need what it offers.