The 20in widescreen monitor has become very popular over the past year or so, and it’s easy to see why. With more and more games supporting widescreen aspect ratios, a decent size, widescreen display with a high, but still graphics card friendly resolution seems like the perfect solution. But Samsung has pushed this concept just a little bit further with the SyncMaster 215TW, which sports a 21in widescreen panel rather than the more usual 20in. 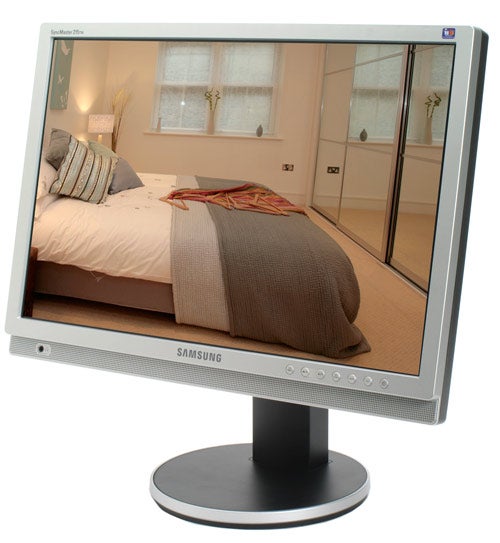 Despite the fact that the SyncMaster 215TW sports exactly the same 1,680 x 1,050 resolution as all the 20in widescreen monitors out there, that slight increase in physical size really does make a big difference. I know this because right now I have the 215TW sitting on my desk next to the SyncMaster 205BW – Samsung’s own 20in widescreen model (a full review of which will be published soon). Obviously I’m not getting any more desktop real estate with the 215TW, but subjectively it’s just more pleasant to work with than a 20in model.


One thing that has really annoyed me with previous 20in widescreen monitors like the BenQ FP202W, ViewSonic VX2025wm and even the impressive NEC MultiSync 20WGX2 is the lack of adjustment in the stands. But Samsung has addressed this issue with the 215TW, making it far more versatile than the majority of 20in widescreen displays on the market. For a start there’s height adjustment at your disposal, as the screen slides smoothly up and down the central column – this was probably my biggest criticism of the previously reviewed 20in screens. Next up is a very smooth panning motion thanks to the swivel pad built into the base of the stand. This is particularly useful if you like to have dual monitors on your desk, making it easy to get the perfect viewing angle, while it also help if you want to show a colleague something that’s on your screen. 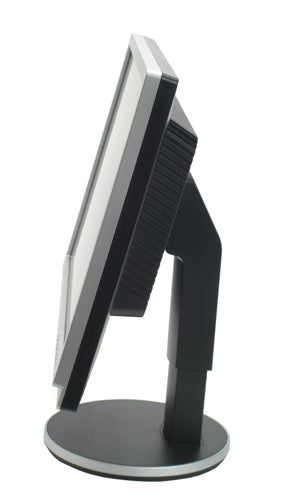 Adding to an already impressive array of adjustments on offer, the 215TW also offers a pivoting function. This means that you can rotate the screen 90 degrees into a portrait aspect ratio. This can be handy if you happen to be working on a very long document and you want to have as much of it viewable as possible. Pretty much every graphics card driver includes a pivoting option these days, so there’s not even any need for bespoke software to make use of this feature. 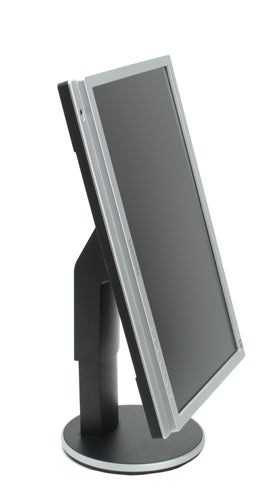 Samsung is well ahead of the competition when it comes to future proofing – the DVI port on the 215TW is HDCP compliant, a feature that I first saw on the Samsung SyncMaster 244T. With Vista just around the corner, you’re going to need an HDCP compliant monitor if you want to watch any protected content. Add to this the fact that HD-DVD and Blu-ray drives should be hitting the market very soon, and the need for an HDCP compliant monitor becomes even more apparent. 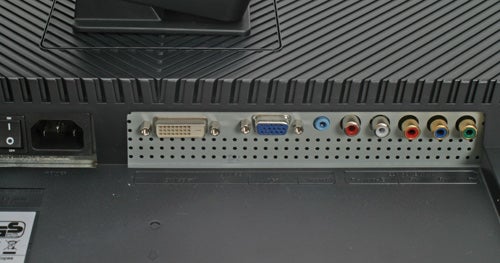 As if all those rear inputs weren’t enough, there are more connection options at the side of the display. Here you’ll find composite video, S-Vide and corresponding audio inputs – so you should be able to connect pretty much anything to this monitor.


With the mention of audio inputs you’ve probably already guessed that this monitor has integrated speakers. I’ve never really been impressed by any integrated speakers in desktop monitors in the past, and I’m afraid that my opinion hasn’t changed. The speakers in the 215TW are weak and tinny and their use is best avoided. On the plus side, there’s a headphone socket located on the left of the front fascia, which is handy if you’re PC is located under your desk. It’s not surprising that the speakers don’t sound great as they’re absolutely tiny, so much so that you don’t even notice them.

Samsung clearly expects you to make the most of all the inputs at your disposal and has included a Picture-in-Picture function. This means that you could hook a cheap Freeview box to the 215TW, and keep an eye on the footie while you carry on working – what more could you ask for! 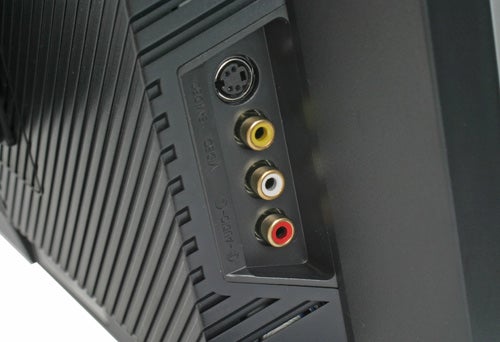 Samsung’s MagicBright profiling feature is in evidence once more. Pressing the MagicBright button on the front fascia will toggle through Text, Internet, Game, Sports and Movie settings, while a Custom setting will let you tune the brightness, contrast and colour calibration yourself. This is a useful feature for anyone that doesn’t want to take the trouble of adjusting their monitor settings for different tasks, and on the whole the MagicBright default settings were pretty good.


The 215TW that I received for review is finished in matt silver, but it is also available in black. The bezel surrounding the screen is reasonably slim and attractive, while the seven control buttons on the front fascia are unobtrusive and don’t spoil the clean lines. The speaker bar is, as mentioned, very small and looks more like a design feature than a speaker housing. As always, design is purely subjective, but I really like the look of this monitor. 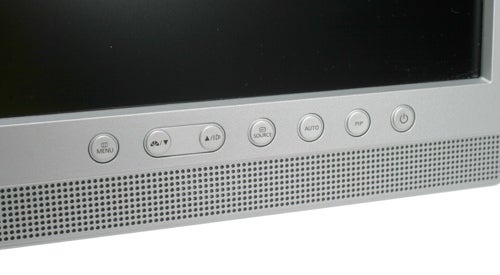 Samsung quotes an 8ms grey-to-grey response time, which is not as low as some of the ridiculous numbers that other manufacturers are quoting. But then Samsung has tried to ensure solid image quality by sticking with an 8-bit panel, rather than dropping to a 6-bit panel in an attempt to lower the response time. The result is a full 16.7million colours, as opposed to around 16.2million offered by a 6-bit panel employing dithering.


I’ve never been particularly obsessive about response time anyway, especially since the quest for the lowest possible number often results in a degradation of image quality. But if you are worried about the 215TW’s ability to switch fast enough, don’t be. I played a lot of games on this monitor using both a PC and an Xbox 360 and it coped admirably. The Xbox 360 looked particularly good, and if you want an affordable screen that can double as your PC and console display, the 215TW should definitely be a contender for your cash. 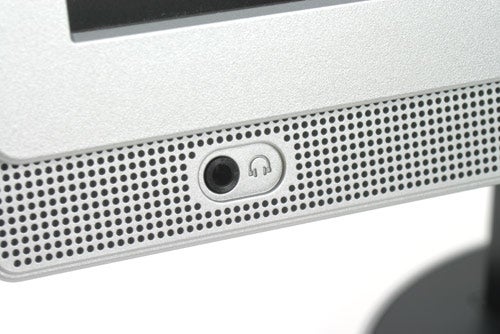 Video also looked very good on this screen, with high definition content looking rich and vibrant. The 215TW even does a good job of picking out detail in dark areas of an image, while blacks are good and solid, rather than grey as with some LCD screens. Unfortunately the 1,680 x 1,050 resolution means that there aren’t quite enough lines for a Full HD 1080 image to be displayed, but considering that the majority of HDTVs sport a resolution of 1,366 x 768, this isn’t a huge handicap.


Testing the 215TW using DisplayMate revealed a very solid performance. The 256 Intensity Level Colour Ramp showed smooth gradation across all the colours. The 215TW managed to turn in a perfect performance in the Colour Scales test with every colour dropping off uniformly at the last block, while there was no hint of compression at the high intensity end. The only small grumble was with the 64 Step Greyscale test, where there was an ever so slight hint of green evident in the middle of the scale, although once again there was no compression on show at either end. 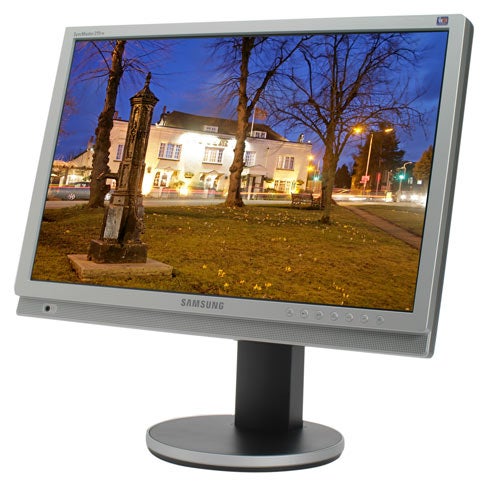 There’s no doubt that the 215TW is more expensive than your average 20in widescreen monitor, with a street price of £469, but you have to put that price into perspective. Not only is the 215TW slightly larger than the raft of 20in widescreen monitors, but it also offers a whole host of features that the competition doesn’t have. Add to this a sleek, attractive design and very impressive image quality and the SyncMaster 215TW looks pretty good value for money.


The SyncMaster 215TW may sport the same resolution as standard 20in widescreen monitors, but it outguns the competition in pretty much every area. The amount of inputs on offer is unprecedented and gives you the option of connecting gaming consoles and AV devices as well as PCs. The image quality is good and the range of stand adjustments is very welcome. Rounding off the impressive feature list is HDCP compliance, adding future proofing peace of mind for the buyer. The 215TW doesn’t come cheap, but if I was looking for a 1,680 x 1,050 display, this is the one I’d buy.