About a month ago I reviewed the Samsung 215TW and decided that it was one of the best widescreen monitors that I’d ever seen. Among the ever growing ranks of 20in widescreen displays, the 215TW set itself apart by using a 21in panel and coupled this with an enviable array of inputs. The only downside to the 215TW was the relatively high price. Now I’m looking at the far cheaper 20in Samsung SyncMaster 205BW, so how does it compare to it’s bigger brother? 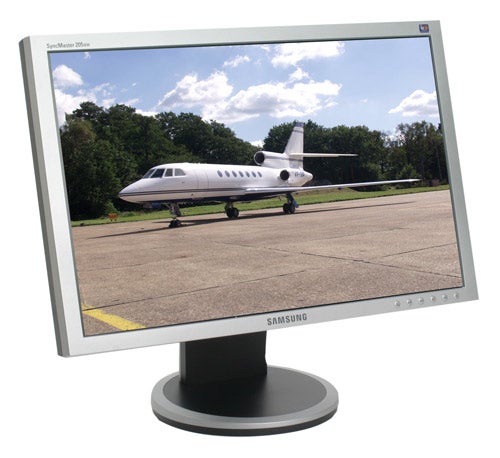 Like the 215TW, the 205BW is a stylish looking display with a very slim silver bezel surrounding the screen. Also like the 215TW, the 205BW exhibits full vertical adjustment – the dampened movement makes it easy to position the screen at the perfect height for any user. The 205BW doesn’t sport a twisting base like its big brother though, so if you want to pan the display left or right you have to twist the whole unit on the desk. Also missing is the pivot function, so if you’re keen on working in a portrait format, this isn’t the screen for you. That said, just having the vertical adjustment puts the 205BW ahead of pretty much all the 20in widescreen competition.


Connection wise you’ve got both DVI and D-SUB at your disposal, but none of the component video goodness seen in the 215TW. That said, the DVI port on the 205BW is HDCP compliant, just like its big brother. It’s great to see that Samsung is rolling out HDCP support on most of its monitors, since we’ll be playing back lots of HDCP protected content once HD DVD and Blu-ray drives start to appear, not to mention Vista. 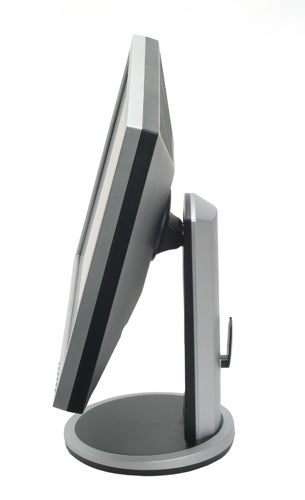 The 205BW does have a slightly lower response time than the 215TW at 6ms compared to 8ms. Thankfully the lower response time doesn’t come at the expense of colour depth, since the 205BW still uses an 8-bit panel rather than a 6-bit model. This means that the 205BW has the full complement of 16.7 million colours at its disposal. Unfortunately it doesn’t mean that the 205BW can match its big brother when it comes to colour fidelity and image quality, but more on that later.

There are six buttons located on the bottom right corner of the bezel, with the power button equipped with an obligatory blue light. There’s an Auto Configure button for when you’re using the analogue D-SUB input, a Menu button, up and down buttons and finally a Select button. The down button doubles as the MagicBright shortcut, which gives you five defaults to choose from – Text, Internet, Game, Sport and Movie. Obviously there’s a custom setting too, so that you can configure your brightness, contrast manually. 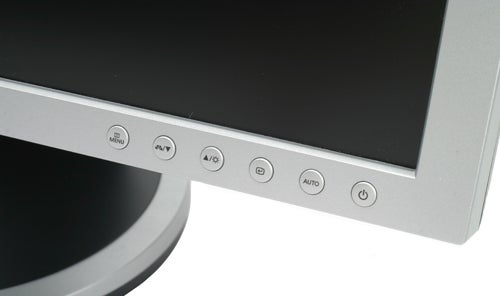 Also in the OSD you’ll find Samsung’s MagicColor setting. MagicColor analyses the image on the screen and adjusts the colour settings to (allegedly) create the best possible colour balance. There’s a handy feature where the 205BW will split the screen in half with one side showing the current settings and the other showing MagicColor. Personally I’d leave MagicColor switched off though, since the result is very oversaturated colours that can be quite hard on the eye after a while.


A 20in monitor with a resolution of 1,680 x 1,050 is obviously going to appeal to the gaming market, so the 205BW needed to put in a good performance during some high octane frag-fests. On the whole this Samsung vindicated itself well during some heavy Counter Strike: Source, Unreal Tournament and Quake 4 sessions in the office. The quoted 6ms response time ensured that there was no smearing or lag issues, even when using a 2000dpi mouse, although some people are more affected by this than others. Likewise video playback was admirable, with the 205BW exhibiting a superb viewing angle, just like its big brother. If there’s one criticism it’s that the 205BW has trouble resolving detail in low light scenes – this is a common problem with LCD displays, but I’ve definitely seen better. 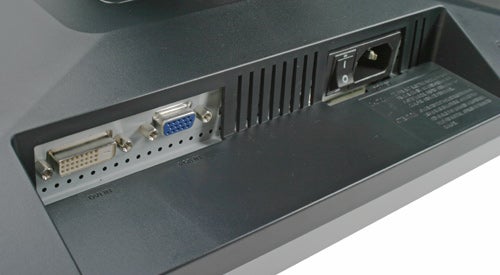 Firing up DisplayMate proved definitively that the 205BW is no match for the 215TW when it comes to image quality. The 205BW has a few problems at the low intensity end of the scale where detail can be lost. If you try to rectify this problem by adjusting the contrast you just lose detail at the upper end instead. The result is that photographs or video with part of the frame in semi-darkness can be a problem – basically you’ll lose detail that should be visible in the darker areas.

DisplayMate also highlighted a distinct green tinge in the greyscale tests. To be fair this is a common problem with TFT monitors and even the superb 215TW suffered in this area, although to a lesser degree. The Colour Scales test wasn’t quite as good as it could be either, with some of the colours dropping off one bar too early. Of course the important thing to remember about DisplayMate is that it is there to highlight weaknesses in monitors and often you will not notice these issues in everyday use. 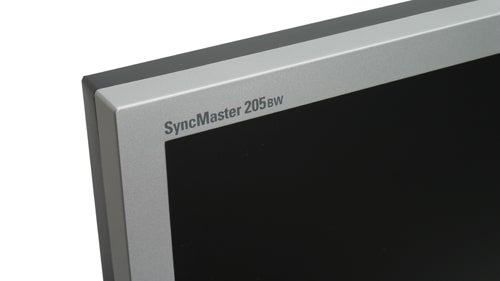 But talking of everyday use, I have to say that given the choice I’d take the 215TW over the 205BW every time – where the 205BW is competent in pretty much every area, the 215TW excels in pretty much every area. But in this case at least, the old adage that you get what you pay for rings very true indeed, because the 205BW is considerably cheaper than the 215TW. Even when you consider that the 215TW is now available for £398.99 compared to £469.98 when I originally reviewed it, the 205BW will only set you back £255. But even taking the price difference into account, I’d probably still save a bit harder and go for the 215TW, it really is that much better.


The 205BW has a lot going for it. The vertical height adjustment is a great bonus considering that no other 20in widescreen display has exhibited such a feature. The design is stylish and the price is truly impressive. Unfortunately the image quality isn’t as good as I would have liked, especially when compared to the Samsung 215TW.


If you’re looking for a 20in widescreen monitor primarily for gaming and you’re on a tight budget, the 205BW is a shrewd buy. But if you’re looking for a great all rounder, for gaming, general desktop work and image editing, then you really should try to stretch to the 215TW. The price differential may be large, but the pivot and pan adjustment, component video input and generally superb image quality make it worth the extra cash.