The Samsung Space Monitor S32R750U has a marvellous space-saving design, which is a real plus for those who can't stand clutter. This specific model is a lifestyle and office monitor though, as it doesn't quite have the Delta E score or high refresh rate to satisfy fussy gamers of creatives.

What is the Samsung Space Monitor S32R750U?

The Samsung Space Monitor is a desk monitor with a flexible stand that’s designed to let you push it flush against the wall behind it, freeing up precious desk space and clamping down on cable clutter.

Available in two versions – 27-inch 144Hz 1440p, and 32-inch 60Hz 2160p – the Samsung Space Monitor is aimed at office workers first and foremost, but knowing that people may want to pick this up for play as well as work, we’re looking at how these fare for entertainment and gaming too.

The Samsung Space Monitor is formal and utilitarian. It’s all right angles, bold, black edges, and relatively skinny bezels, save for the south edge of the display. There are no flashy RGB lights here. This is a serious monitor for serious people.

The Samsung Space Monitor’s key feature is the flexible desk mount which lets you clamp it to the side of a desk or table. 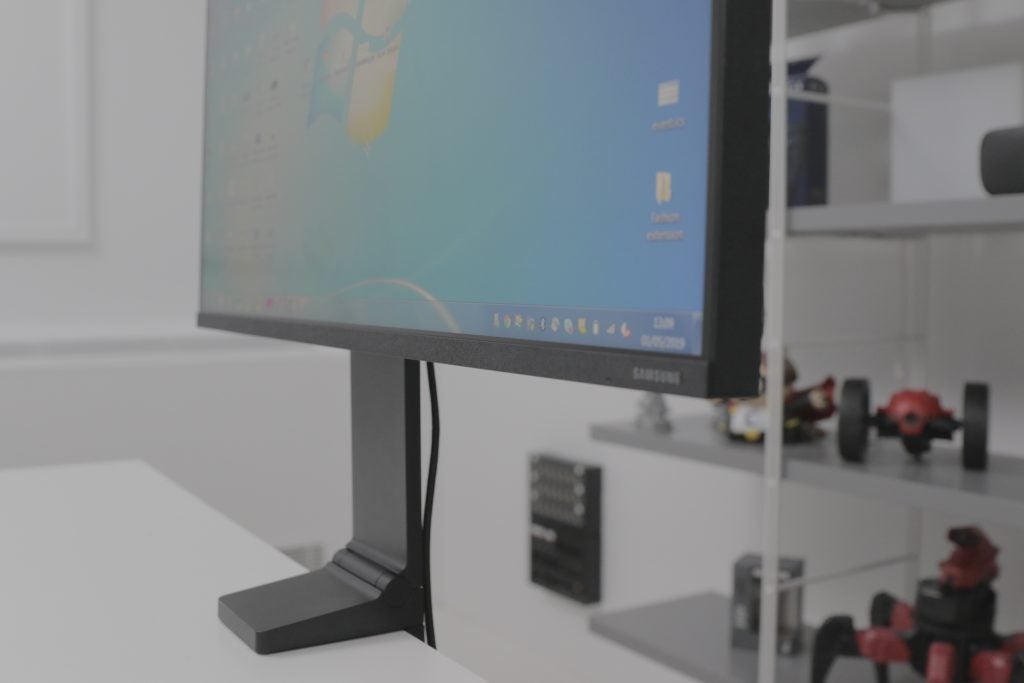 The Space Monitor’s clamp is wide enough to be attached to the sides of most workplace desktops. You’ll need a cross-head screwdriver – and maybe a friend – to get it standing upright.

The clamp itself extends to 3.5-inches in total. Out of the box, it’s screwed into the Space Monitor’s stand so that it’ll extend to about half that – if you need to stretch it further, then you’ll have to unscrew the clamp, move it to the lower position and re-attach it.

We actually couldn’t fit this on the white benches where we keep our test rigs and test out other monitors, even with the clamp adjusted, so not only did we have to grab our cross-head screwdriver, we had to opt for a less thick table instead.

While the Space Monitor’s not super-heavy – the monitor itself weighs 4.8kg but with the stand attached it’s 7kg – you might find it easier to pin this to your desk with someone’s assistance.

Once it’s firmly attached, you’re then able to push the Space Monitor all the way up so it’s perpendicular to the desk, pull it down so that its chin rests on your desk, or have it hovering somewhere in between. Though you’ll want to carefully raise or lower the monitor with both hands, you can do it effortlessly with one. The action feels smooth and the whole package feels remarkably sturdy. 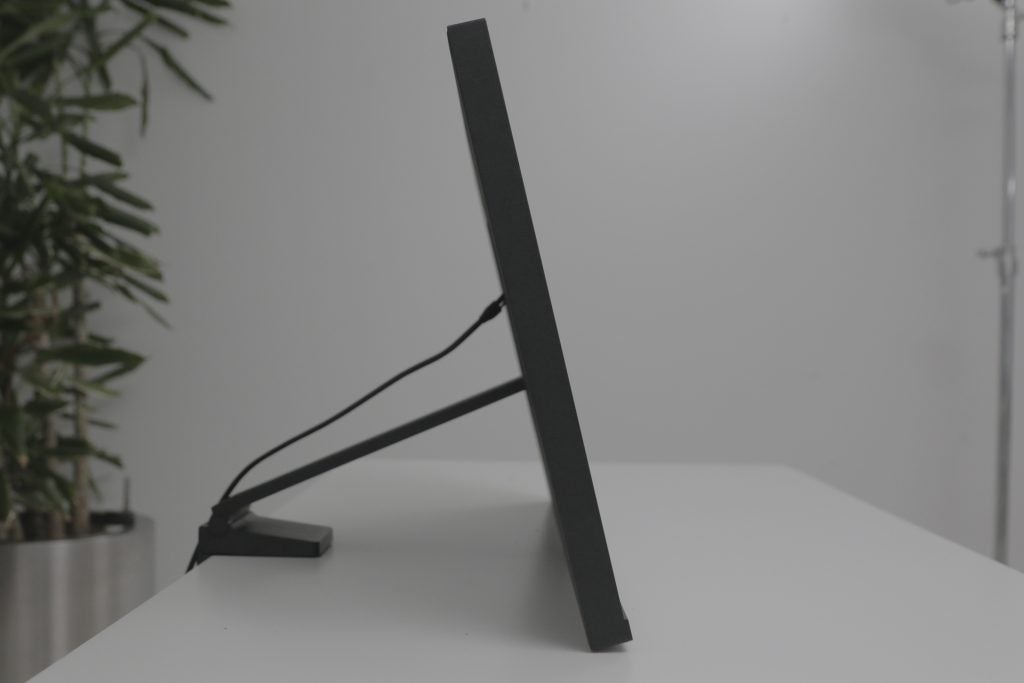 The Space Monitor resting on your desktop – useful if you want to get a closer look at something.

Samsung spokespeople told Trusted Reviews that the Space Monitor’s flexible mount will be good for over 5000 ‘movements’ like this, and that you’ll be able to order another stand should your one start to exhibit signs of wear and tear.

A real nice feature of the Space Monitor’s stand are the cable tidy grooves cut into the spine. This lets you neatly thread wires down the back. Thanks to a plastic panel locking everything nicely into place, you don’t get any unsightly cable clutter clogging up the place. I like these simple-but-effective considerations.

Samsung’s included a composite HDMI and power cable – officially called a Y-Cable – in the box, which is an excellent space saving idea. This means you can have HDMI and DisplayPort cables connected to your devices while drawing power from the mains. 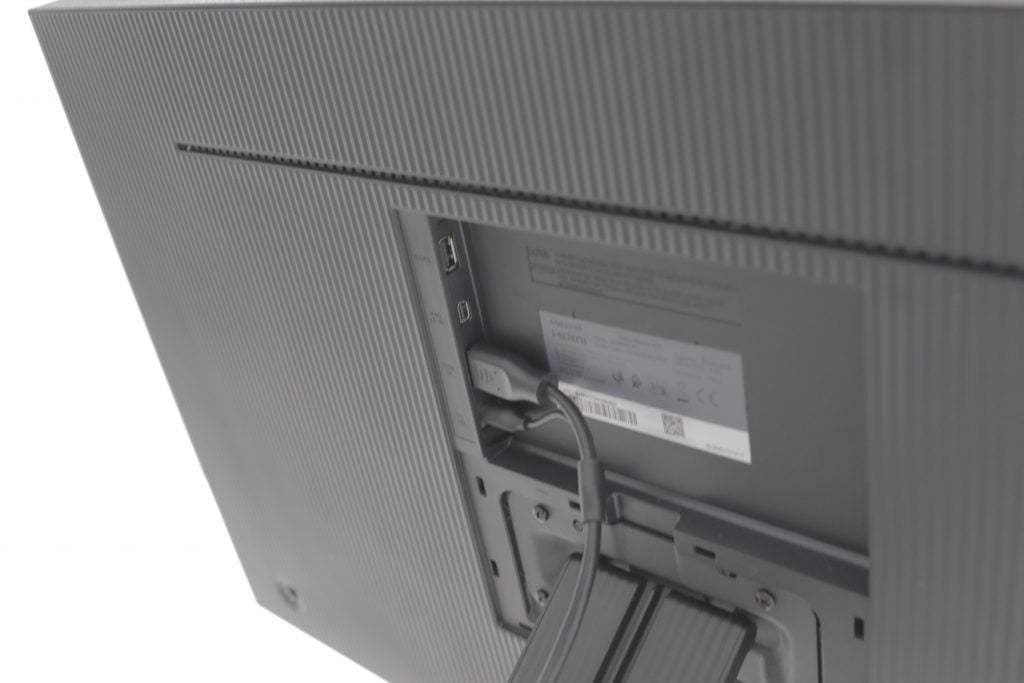 The space-saving Samsung Y-Cable, handling both power and HDMI in one wire, in action. Above those ports is the Mini DisplayPort, and the USB-A port.

In terms of ports, you don’t get a huge amount here – one HDMI port, one Mini DisplayPort, and one Type-A USB for updates and servicing.

That’s not terribly generous, and with more and more devices featuring Thunderbolt ports hitting the market, not very future-proof either. Thunderbolt is still relatively new tech though and it’s expensive to implement – had Samsung included one here, the price of the Space Monitor would have rocketed.

Of course, you can connect the Samsung Space Monitor to a dock if you need to expand connectivity, but then doing this contributes to the clutter that the Space Monitor is trying to cut down on. None of this is especially bad, just a consequence of the design and the relative lack of ports.

By contrast, the ViewSonic XG3240C is another 32-inch LCD monitor in a similar price range. While it doesn’t feature a bendy and flexy stand, comes with two HDMIs, a full-sized DisplayPort connection, plus four USB 3.0 ports.

The menu system is also one of the best I’ve tested. On-screen displays (OSDs) are often the bane of many PC user’s lives – poorly thought out and labyrinthine menus combined with stiff controls can undermine a decent monitor.

I’m happy to report the 5-way directional stick used to navigate the Samsung Space Monitor’s OSD is a big change for the better. It’s located on the rear of the monitor, at the bottom right hand corner.

While the positioning is admittedly prejudiced towards right-handers, it’s easy enough to just reach around and start flicking through the settings.

The quick menu layout is simple and intuitive. Whether you want to do something as simple as dial down the brightness, switch between sources or toggle low blue light mode, you’re rarely more than four clicks away, and the menu paths themselves are super-logical. If only we could say the same about all OSD menus.

So the Space Monitor’s design is awesome, but what about picture quality? Here things are a little more mixed. The Space Monitor is a solid performer in some areas, but it struggles in others.

Out of the box you get a choice of Standard, Cinema and Dynamic Contrast modes. The fact you don’t have standard ones based on colour gamuts, like sRGB, Adobe RGB and DCI-P3 should be warning enough that this monitor isn’t intended for creative work. But with further testing using our office colorimeter it actually performed fairly well. 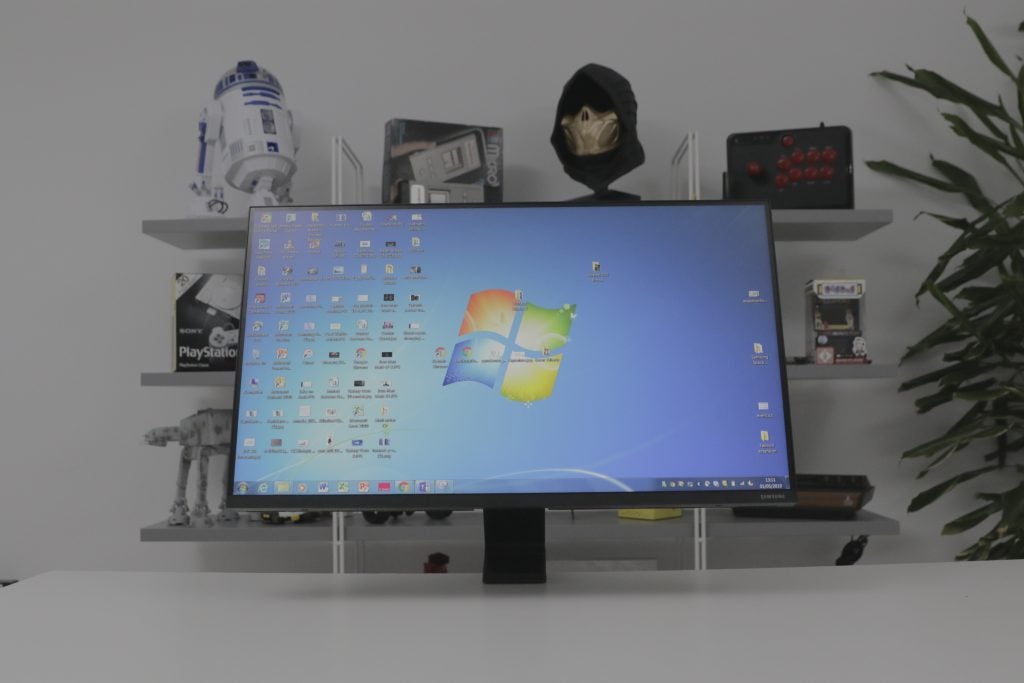 Whether the Space Monitor sits all the way back, perpendicular to the desk, or it’s pushed all the way down, sat on the desk’s surface, or somewhere in between, that stand holds it nice and steady.

Uncalibrated, the monitor covered 99.6% of the regular sRGB gamut, which is what most monitors target. What’s more impressive is that I managed to cover 79.9% of the Adobe RGB and 88.8% of the DCI-P3 gamuts commonly used by creatives.

For non-techies, colour gamuts are an indication how accurate colours rendered on screen are compared to how they’ll look when printed or played out in the real world. Many movies use the DCI-P3 gamut, while photographers and print professionals still often use Adobe RGB.

The screen also gets most of the basics right. During my tests it offered a solid max brightness of around 350 nits and a solid black level of 0.14 nits. This adds up to a superb 2405:1 contrast ratio. This means blacks look suitably inky and movie content and games playing on the monitor look really immersive. Some people may bemoan the lack of HDR support – monitors need to generally hit 1000 nits max brightness to get VESA DisplayHDR 1000 certification – but at this price what do you expect?

Colour temperatures are also nicely handled for the most part. Regardless of which mode you switch to they generally don’t stray too far from the 6500K ideal. In Standard we got a reading of 6045K, which is a little on the warm side but far from terrible. 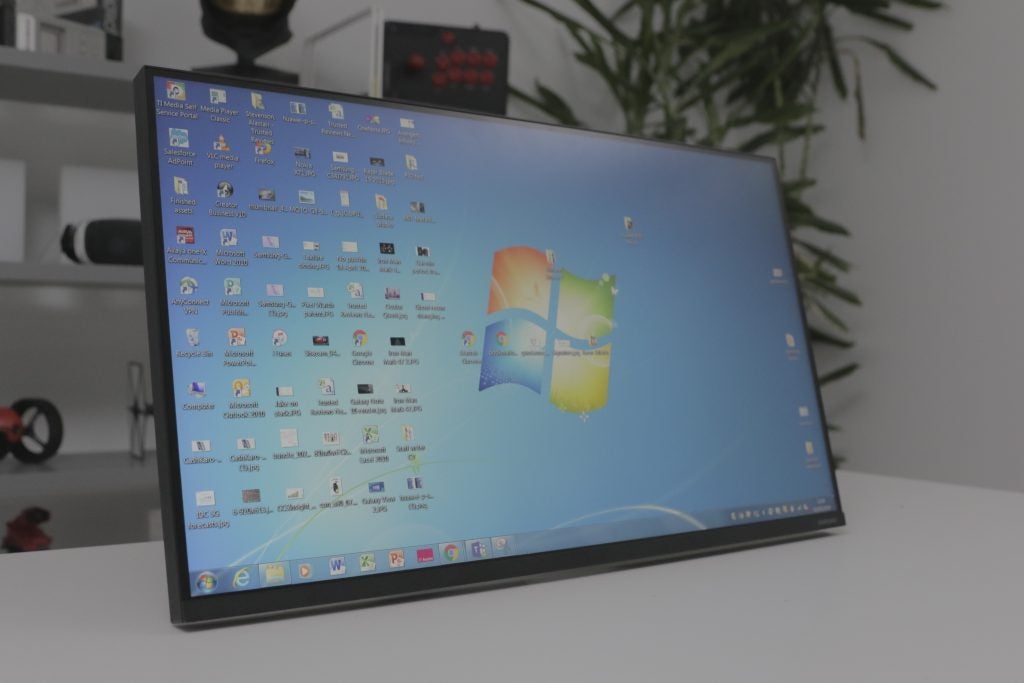 With the monitor pushed all the way down, you won’t even notice that the Space Monitor is even attached to anything.

So far so good? We thought so. But the screen does come with a few issues. The biggest of these is screen uniformity. Uniformity checks to see if brightness levels are consistent across the whole panel. LCD displays, which use backlights, tend to suffer from abnormalities around their edges, and this sadly is the case with the Samsung Space Monitor with noticeable variations in light levels, especially along the left side.

Delta E levels are also a little hit and miss. I detected a 2.35 Delta E in standard mode uncalibrated. That’s a way off the desired 1.0 or below Delta E you’ll find on calibrated monitors. Switching to the Cinema and Dynamic Contrast figures the level rose to 3.0 and above, which isn’t great. Delta E is a measurement of the distance between colours. It’s a common metric used to gauge colour accuracy. As a rule of thumb the human eye can’t detect differences below 1.0. For a lifestyle monitor like this, such scores are common – it’s just a reminder that the Space Monitors are not intended for high-end photo work.

And the Samsung Space monitor is indeed good enough for most office work and home entertainment purposes, though the 60Hz refresh rate means the 4K model we tested isn’t the best choice for gamers. Decent colour gamut coverage is another bonus that’ll be great news for semi-serious artists. But the Delta E is a sticking point that’ll put off more serious creatives.

Should I buy the Samsung Space Monitor S32R750U?

If you’re after a flexible, solid monitor can easily be stored away when the work day’s done then the Samsung Space Monitor S32R750U is a solid choice. It features a wonderfully clever hinge that lets you store it against a back wall, freeing up desk space, or pull it forward as needed. This plus excellent build quality, a decent contrast ratio and solid colour gamut coverage make the Space Monitor a great all rounder for home office users or students with limited space.

But issues with its screen uniformity and Delta E stop it being a great choice for more serious buyers. Gamers who don’t need the 4K resolution may also be better off looking at the smaller 1440p variant, which has a higher refresh rate.

The Samsung Space Monitor S32R750U has a marvellous space-saving design, which is a real drawing point for those who can’t stand clutter. It’s important to acknowledge this specific model is a lifestyle and office monitor though, as it doesn’t quite have the Delta E score or high refresh rate to satisfy creatives or gamers.