For certain environments, projectors have always been favoured over other display technologies (plasma, CRT, LCD) for two reasons. One: their relative cost for the size of screen you get is usually far better, and two: they are portable. Whether in a school, office, or house, it’s infinitely easier to move a projector from room to room than a TV. However, while they’ve always been ”more” portable than TVs, the essential mechanics of a projector has meant they need to be at least a certain size to function effectively.


However, recent developments, in LED technology in particular, have enabled projectors to shrink in size to the point that they’re now ”truly” portable. No longer do travelling sales executives have to worry about working out how to use the projector at a client’s office; they can now pop their own projector in a bag along with their laptop. Likewise, you no longer have to rely on your friends having a big screen to watch the match, now you can bring your own with you.


Or at least that’s the vision being sold by the makers of these new portable projectors. As John proved when he looked at the Optoma Pico PK101, though, there’s only so small you can go without performance being compromised too much. 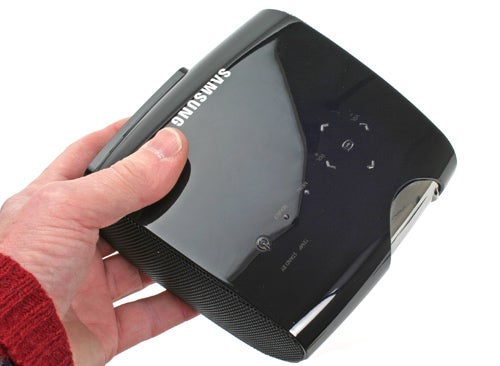 Enter, then, the Samsung SP-P400B. It’s not truly pocketable like the PK101, but with dimensions of only 14cm x 14cm x 7cm and weighing only 1Kg, it’s plenty small and light enough to take with you in a small rucksack or laptop bag and not end up with a cripplingly sore back as a result. Furthermore, with a resolution of 800 x 600 pixels and a set of LEDs that combine to produce 150 lumens, it should be able to put in a decent performance.


First impressions are very positive. The SP-P400B’s attractive curved figure and glossy black finish is perfectly complemented by the chromed lens cover, while the mesh sides are an ingenious solution to maintaining maximum airflow without compromising the overall look. 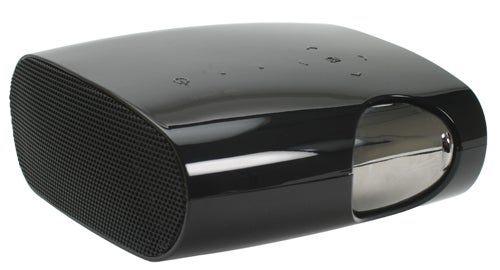 There’s further good news thanks to the set of touch-sensitive buttons that adorn the top. They’re not backlit but they’re embossed and the layout is simple enough to feel your way around in a darkened room.


One problem we did notice was the lens cover, which was rather too easy to flick open. Normally this wouldn’t be a problem but considering that the SP-P400B is likely to find itself stuffed in a bag while on the move, some more secure protection for the lens would seem a must.


Connectivity is also another poor area as video inputs consist only of VGA and composite. Despite its business orientation, not being HD, and it only having two puny 1W speakers, the single cable easiness of HDMI would have been a very welcome addition. Especially as most standalone AV equipment won’t have a VGA output so you’ll be left using composite, which no-one should have to do. There is at least a headphone jack for quiet personal viewing. 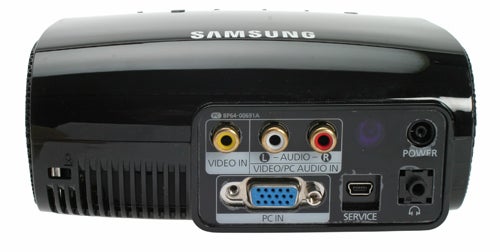 Setup is also another area where the SP-P400B falls down. With no optical zoom, the only way to increase or decrease the image size is by shifting the projector back or forth. In an office environment this probably isn’t a huge problem but if you’re setting it up to watch a film at a friend’s house you may be struggling to find somewhere to put the SP-P400B (without resorting to precarious box-based balancing acts) to get the right image size, especially as it’s quite long-throw. There is at least a focus wheel on the side to ensure that your images are sharp, no matter how large or small they are.

Perhaps the most worrying thing about this projector, given that it’s supposed to be portable, is its power supply. Measuring 14cm x 7cm x 4cm, it’s nearly half the size of the projector itself so will add considerably to the amount of bulk you end up carrying around. At least the mains lead is of the IEC C13 (i.e. standard computer power lead) type, so you could leave it behind in the hope that your client has one on site. 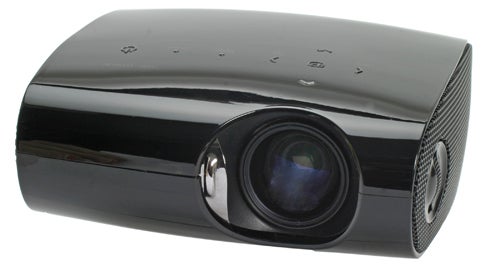 Thankfully the on-screen menus go some way to reviving the SP-P400B’s fortunes. They’re intuitively laid out, respond quickly, and there are a fair number of image options on offer. For a start there’s vertical keystone correction, which enables you to get a square picture even if the projector’s slightly off centre. Then there’s a selection of scene modes, including Movie, Monitor (which lightens dark areas), Dynamic, and a user customisable one. Those sit in addition to basics such as brightness and contrast adjustment plus a choice of 16:9 or ‘normal’ (4:3) aspect ratios.


The remote is another big positive. The buttons give plenty of feedback so you know when you’ve pressed them and the combination of a good layout and different shaped buttons makes use in the dark very easy. 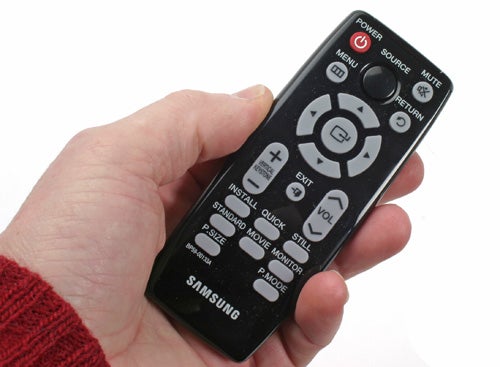 As for picture quality, it was surprisingly good. There was no obvious rainbow effect (that DLP projectors often suffer from) and black levels were impressively deep, though at the expense of detail in dark areas. In fairness, this is only really noticeable in side-by-side comparisons but in isolation we were quite happy to watch a film on the SP-P400B. Or rather, we would have been had the cooling fan not been quite so loud.


Given the SP-P400B’s mainly business focus, we can understand that silence isn’t going to be its first priority. But to not even have any sort of quiet mode – even if it meant reducing the brightness of the lamp – is rather frustrating. Sure, if you turn your sound system up and watch an action-packed film with an appropriately loud soundtrack, you probably won’t mind, but if you really want to lose yourself in the home cinema experience then this projector isn’t for you. 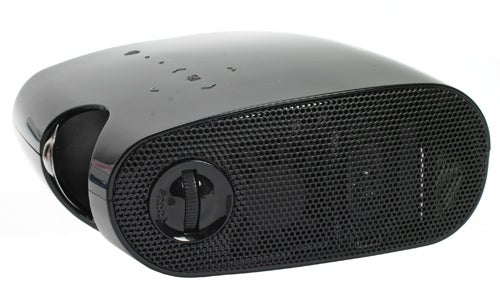 On the subject of office use, it turns out 150 lumens doesn’t equate to a very bright image and the SP-P400B struggles to cope in full sunlight. However, by closing the curtains you should be able to get a perfectly visible image.


In terms of value, there’s an obvious premium to pay for the SP-P400B’s miniaturisation. However, unlike the £240 Optoma PK101, the SP-P400B hasn’t overly compromised image quality to attain its size. Conversely, larger projectors, like the Epson EH-TW420 can offer HD output and HDMI connectivity at a similar price. It’s therefore worth asking yourself whether you really need a projector that can be carried around in a bag rather than one you can just throw in the back of the car.


First and foremost, the Samsung SP-P400B succeeds in being a highly portable yet effective business projector, even if it isn’t quite pocketable. However, the surprise here is that it’s also not bad for casual film watching, so it could end up serving a dual purpose. There are a few problems but none are untenable and when so few alternatives exist on the market, it’s hard not to recommend the SP-P400B.