As one of the TV world’s most prolific brands, at first glance it seems a little surprising that the SP-A800B is only the second home cinema projector Samsung has ever managed to launch into the UK. But of course, if you think about it, building TVs and building projectors are very different disciplines; being great at one doesn’t necessarily make you great at another. Plus the projection market is a notoriously tough nut to crack, especially if you don’t have mass projector production facilities in place.


All of which explains three things about the SP-A800B: 1) why it’s taken more than two years to arrive after Samsung’s home projection debut, the 720p SP-710; 2) why it’s not exactly the most widely available projector in the world right now; and 3) why Samsung has turned to a ‘third-party expert’ to help it get its pictures right.


That expert is one Joe Kane, the chap who brought us the renowned ‘Video Essentials’ DVD, complete with lots of test signals and setup methods for getting the very best out of your TV. He’s an internationally recognised boffin in the area of picture quality, so getting him onboard to ‘tune’ the A800B’s pictures seems a clever move. 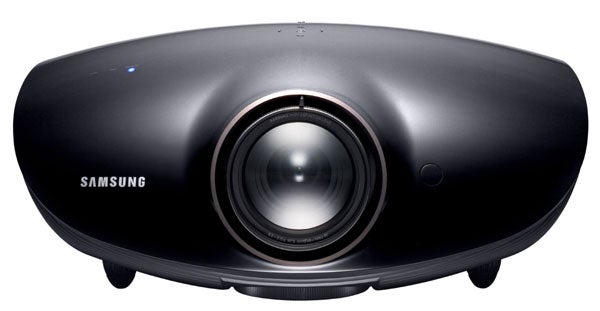 Also rather clever is the A800B’s design, which does its utmost to make an advantage rather than a brickbat out of the fact that it’s really very large by the standards of your average desktop projector. Its prettiness is partly down to its extravagant use of saucy curves wherever it can fit one, and a high-gloss dark finish that’s also got a vaguely translucent element to it, so that the projector’s power lights and other indicators shine through in almost eerily stylish fashion.


Making the manual controls on the projector’s top touch sensitive doesn’t harm the up-front elegance, either. Another promising sign is the A800B’s lens, which is impressively large for such an affordable projector, and also boasts a decent level of optical zoom to help you get set up.


Further set up help comes from a vertical image shift wheel on the projector’s underside, though slightly surprisingly there’s no horizontal image shift, nor keystone correction, meaning you won’t be able to get the edges of your image looking straight if your room arrangement means you have to position the projector even slightly to the side of your screen.


In terms of connections, the A800B has most of the key bases covered, with two HDMIs, two component video inputs, a D-Sub PC port, the usual S-Video and composite video inputs, and an RS-232C jack for system integration. The only thing conspicuous in its absence here is a 12V trigger jack that could have been used to drive an electronic screen.

Turning our attentions to the A800B’s innards, we find a 6-segment colour wheel that should, hopefully, keep a lid on DLP’s rainbow effect noise; a slightly more powerful than usual 300W lamp; a very respectable claimed contrast ratio of 10,000:1; and, um, a DarkChip 2 DLP chipset.


Why the ‘um’ concerning the DarkChip 2 chipset? Because these days we’re accustomed to all but the most entry-level projectors using Texas Instruments’ newer DarkChip 3 system, with its improvements to black level response and motion response times.


It’s tempting to see this use of a rather aging chipset as a side effect of Samsung’s apparently vast lead time in putting the A800B together. But Joe Kane has a different spin to put on it, namely that he believes the DarkChip 2 system delivers better shadow detailing than the newer chip. Obviously this is something we’ll be on the look out for during our review…

Features within the projector’s nicely presented onscreen menus, meanwhile, include a digital noise reduction routine; a 1080p/24fps mode; overscan removal; colour patterns and various test signals; the ability to adjust the lamp between ‘theater’ (darker) and bright modes; a series of thematic image presets; colour temperature and gamma adjustments; and DynamicBlack, which can automatically adjust the projector’s iris to reduce/increase the light output of the projector during dark/light scenes, for enhanced contrast and black level performance.


In light of the DarkChip 2 revelation mentioned earlier, inevitably the first thing I really looked at during the projector’s test phase was its black level response and shadow detailing. And rather to my surprise, I have to admit that Kane possibly has a point when he suggests that DarkChip 2 might be better than the newer chipset when portraying shadow detail.


During a particularly dark scene, such as any of those in Mrs Lovett’s basement in the Blu-ray of Tim Burton’s Sweeney Todd, there really did seem to be a touch more texture on show in the room’s walls, and the suggestion of a bit more human dismemberment evidence to go with it!


However, impressive though this shadow detailing undoubtedly is, it’s also undeniable that the Samsung’s pictures don’t go quite as deep in the black level department as those of good DarkChip 3 projectors. This means that for all their extra detailing, dark scenes can also look a touch grey.


What’s more, the lack of real punch to the picture’s black levels means that images in general don’t look quite as dynamic and aggressive as I’d like. Take, for instance, the opening free-running sequence in Casino Royale. This is a predominantly bright, sunlit scene, but thanks to the slightly flat feel to its dark picture elements, such as shaded areas, the image just doesn’t seem quite as rich and cinematic as we’ve seen it looking elsewhere.

To be fair, how you react to the A800B’s black levels is potentially a matter of taste. For while I personally like my blacks to look a bit deeper than those on offer here, I could certainly anticipate that some people will prefer to see slightly more background detail during dark scenes, even if the general tone of those dark scenes is a tad grey.


It should be said here that the black level findings we’ve just reported were recorded with the DynamicBlack feature turned off, since we found that turning it on caused a) some noticeable brightness ‘stepping’ in the picture following certain cuts as the iris adjusted itself, and b) a marginal reduction in the integrity of the colour tone.


And believe me, you do not want this projector lose its colour integrity. For that, without question, is the A800B’s greatest strength. Here you really do have to hand it unequivocally to Joe Kane, as his tinkering with the projector’s tuning has reaped genuinely outstanding results.


Rarely indeed have we seen skin tones, in particular, that look so completely credible and subtly varied as those delivered by the A800B. But it’s not just skin tones where the colour accuracy makes itself felt; there’s an extra level of authenticity to pretty much everything, from the varied green shades of the trees of the Apocalypto Blu-ray’s jungle setting to the subtle blue variances in the sea during Casino Royale’s Bahamas sequence. Awesome.

The picture is also to be commended on its sensational level of fine detailing, as it goes about revealing extra subtleties of texture in clothing and faces that you’ve no right to expect on a sub-£3k DLP projector, even a full HD one.


Even better, this extreme clarity and sharpness is produced without any serious amounts of grain. In fact, the only ‘grittiness’ in the A800B’s pictures is always entirely what’s present in the source; the A800B adds any dot noise of its own, even when portraying people moving across the screen (something that can still cause a few DLP models to show dithering and dotting noise).


At this point I realised that throughout my tests, I’d never once become aware of the A800B’s running noise. It really does run superbly quietly for a DLP model, and in this respect puts many far more expensive projectors to shame.


While these strengths all do more than enough to persuade me that Samsung owes it to us as well as itself to persevere in the projection marketplace, however, I do have a couple more little flaws to report.


First, perhaps again because of the DC2 chipset, fast motion can look a touch blurred and indistinct at times, especially if there’s a camera pan to contend with. And second, I found myself more aware of the DLP rainbow effect than I’d ideally like. Which is to say that extreme points of contrast in the image can flicker with red, green and blue stripes, especially if you move your eyes over the picture – something you will often find yourself doing if you’re watching on a really big screen.


There’s a lot to like about Samsung’s A800B. The brand’s connection with Joe Kane has certainly helped the projector stand out from the pack in the shadow detail and colour tone departments, and the design is both practical (in that it’s terrifically quiet) and pretty enough to embellish any room.


Now if Samsung could just see its way to pushing the A800B’s price down to around £2k, or else deliver a new projector with a slightly deeper black level response and less rainbow effect, it would have a truly special proposition on its hands. Fingers crossed…