For a brand renowned for deluging the marketplace with seemingly endless amounts of fast-changing TV ranges, Samsung sure is tentative about projectors. In fact, in the three years that I’ve been covering AV kit for TrustedReviews, we’ve only seen two Samsung projectors – and one of those, the SP-P400B was a little pocket-sized convenience job rather than a proper home cinema machine.


But today I’m about to raise the number of Samsung projectors we’ve covered to three, as I set about the SP-A600B – a model that arrives the best part of two years after Samsung’s previous home cinema contender, the SP-A800B. Here’s hoping Samsung has put all that time to good use in making the A600B a bit more stellar than the rather average A800B. 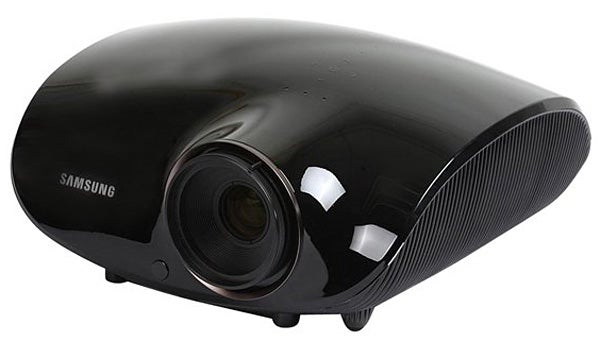 The A600B gets off to a tidy start, at any rate, by being quite cute to look at thanks to a seriously curvy – almost arched – shape and high-gloss black (or possibly very deep blue!) finish.


Its lens looks promisingly large for such an affordable projector too, and build quality seems solid if not spectacular. It’s also pretty well connected for a sub-£1,200 Full HD projector, with two HDMIs, a composite video input, an S-Video input, a component video input, a D-Sub PC port, and an RS-232C jack for system integration. In an ideal world we might have also found a 12V trigger out and a USB input, but as I so often have to say, since when has the world ever been ideal?!


The A600B’s specs class as fair to middling. I’ve already noted the Full HD native resolution, and this is joined by a 4,000-hour lamp life (if you run the projector in eco mode), a promising 1,000 ANSI Lumens claimed brightness output, a good (for this price point) six-segment DLP colour wheel, and a passable claimed contrast ratio of 3,000:1. 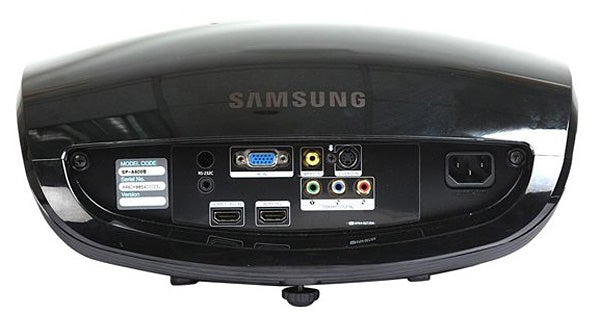 If you’re thinking that this contrast figure looks very low compared with the 50,000:1-type figures bandied around by some rival projectors, then you should realise that in the A600B’s case the quoted contrast ratio is a ‘native’ figure, not one that depends on some dynamic iris jiggery pokery.


So far the A600B has got me feeling reasonably optimistic about its chances. But my mood changes abruptly as I try to set the thing up and uncover a series of limitations.


First and worst, there’s no vertical or horizontal image shifting. This made it really quite difficult to get the image correctly positioned on the screen in my test room – especially since my projector mounting position of choice is on a stand at the rear of the room, behind my seating position. In the end I had to use a far from ideal combination of the screw down ‘feet’ on the projector’s underside and, um, a pile of magazines under the rear edge.


This situation also meant that I had to make liberal use of dreaded vertical keystone correction, whereby the projector effectively distorts the image’s geometry in order to sort out the trapezoid image shape you end up with after tilting a projector up or down. Grr.

The headaches you might find with installing an A600B aren’t exactly helped, either, by the projector’s relatively impoverished optical zoom; all you get is 1.3:1. This found me having to move my projector stand some distance forward from the rear of my room.


Of course, it’s entirely possible that the A600B might just so happen to fit within your particular room layout perfectly comfortably, without you having to struggle as much as I did. Though I suspect that precious few people will be able to get away without using at least a little keystone correction – the very feature that’s most likely to get AV purists’ backs up.


The A600’s remote control leaves much to be desired, too. On the upside, it’s nicely finished and sports impressively few buttons. But it’s also so small it’s easy to lose in a dark room, and it doesn’t feature any button backlighting.


Trawling through the A600B’s cute onscreen menus doesn’t find anything particularly mind-blowing on the feature front. The only things that stand out are: options to show the picture with just its red, green and blue constituents (to aid with calibration); the option to turn off overscanning; a few built-in test patterns; adjustable gain and offset values for the red, green and blue colours; the ability to choose from a selection of Kelvin-based colour temperature presets; and a trio of themed (Film, Gamma, Graphic) Gamma presets.

The A600B’s picture quality has a game stab at making me forget the multiple setup irritations I felt. Its greatest strength for its money is, unquestionably, its brightness. Bright scenes bounced back of my screen with startling intensity, delivering pristine peak whites, and outgunning the brightness efforts of the recent spate of budget DLP models we’ve seen from Optoma, BenQ, Acer and Vivitek.


This immediately makes the A600B’s pictures attention grabbing and punchy, as well as making images more watchable in ambient light than usual for the affordable end of the projector market. (Not that watching a projector in any sort of ambient light is ever something I’d recommend, of course!)


I was also very impressed by how sharp the A600B’s images look. It’s comfortably able, for instance, to reproduce the ‘HD grain filter’ effect that’s applied as standard to the Xbox 360’s ”Mass Effect 2” graphics, where many other budget projectors fail to catch a full sense of the deliberate noise the filter introduces. Similarly, the A600B can reproduce exceptional levels of detail and clarity from a good Blu-ray source.


Unlike many budget DLP models, moreover, the A600B doesn’t suffer badly at all with judder while watching 1080p/24 Blu-rays, allowing the crispness to remain more or less intact when things get moving.


Motion additionally reveals the projector to be apparently impervious to DLP’s once-common phenomenon of fizzing noise over skin tones as they pass across the screen.

While we’re on the subject of DLP-related artefacts, I’m pleased to say that the A600B is also relatively untroubled by DLP’s dreaded rainbow effect. Even during a particularly taxing sequence like the black and white scene at the start of ”Casino Royale”, I only felt truly distracted by the tell-tale blue, red and green striping flaw if I aggressively moved my eyes from one extreme side of the picture to the other – something nobody in their right mind would do during normal viewing unless they are either sitting way too close to the screen. Or maybe watching a tennis match…


I should say here, though, that I personally only tend to be averagely troubled by the rainbow effect. So if you know from hard experience that you’re one of those people who are exceptionally susceptible to it, you should still try and audition an A600B before you think about buying one.


One final string to the A600B’s bow concerns its running noise. For it’s pretty quiet by budget DLP standards, at least in its Eco lamp mode, producing a gentle – and thankfully consistent – gentle whirring noise that’s easy to ignore. 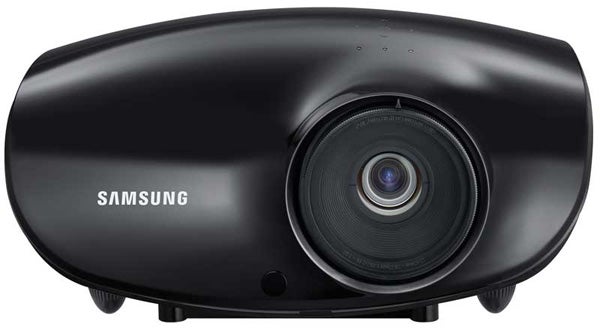 There are two good reasons why the A600B only scores a seven for picture in our ratings, though. The biggest problem by far concerns the projector’s black level response, which is rather average by today’s standards, even at the budget end of the market.


Dark scenes invariably appear through a veil of greyness, even if you use customised versions of the two provided Movie preset modes. This doesn’t lead to the typical loss of shadow detail, at least, since the projector has enough brightness to pick out subtle details in dark scenes. But the grey look to black colours does leave dark scenes looking generally slightly unnatural.


The A600B’s black level limitations might also explain – at least partially – the second problem I have with its pictures, namely that colours tend to look a bit muted.


This isn’t to suggest that the A600B’s colours are a disaster by any means; actually, some of its tones, especially where skin is concerned, are impressively accurate for such an affordable machine. But there just isn’t as much vibrancy around as I’d like to see during heavily saturated sequences like the ”Casino Royale” opening credits, or a typical HD footie match on Sky.


While there are enough good things about the A600B to persuade me that Samsung should persevere in the scarily competitive projection marketplace, I can’t help but think that Samsung really needs to commit to the market more whole-heartedly if it’s going to keep up with the projection Joneses. If you manage to find an A600B going for sub-£1,000 at some point in the future, it might just be worth a punt. But as it stands, for me it doesn’t have enough going for it to justify £1,190.