No, the reason for our unusually ‘physical’ TV interactions is that the TV in question has been Samsung’s new UE55ES8000: the first TV to truly attempt to replace the traditional remote control with an ‘alternative’ control system.

There have been half-hearted stabs at this before; we remember with a shudder, for instance, JVC’s ‘clapping’ system, whereby you could perform two or three basic functions by clapping your hands. But the UE55ES8000 is to previous alternative control attempts what Mount Everest is to a gentle hillock. Well, nearly.

The set actually delivers no less than three control innovations: voice control, gesture control, and a touchpad remote control, which we’ll look at in turn in a moment. Before we do so, though, it’s worth pausing to reflect on exactly why Samsung has felt that now was the right time to serve up such a comprehensive suite of control innovations.

The main inspiration for the new control systems has been the expansion of Samsung’s Smart TV services. With so many icons to choose from, web pages to navigate and in-depth search engines to utilise, Samsung has – thankfully – decided that normal remote control input systems no longer cut it, as they make interfacing with some of the new features just too fiddly and long-winded.

As we started playing around with the UE55ES8000’s trio of new control options, we definitely had our sceptic’s head on. Having failed to be seduced for the most part by either Microsoft’s Kinect system or Nintendo’s Wiimote, and also feeling convinced that we would feel utterly ridiculous barking instructions at our TV screen, we thoroughly expected to find the gesture and voice controls to be nothing more than gimmicks. But after a few days the UE55ES8000 has won us around – at least where the voice control system is concerned.

There are three main reasons for this. First, the UE55ES8000 has proved remarkably flexible when it comes to recognising voices, handling male, female, child and even fairly heavy dialects with surprisingly little difficulty.

Second, the UE55ES8000’s voice control system has proven able to recognise far more words than we’d have ever dreamt possible – at least from a ‘first-generation’ system. This manifests itself initially in the amount of direct vocal commands you can issue to the TV. After uttering the required ‘trigger word’, the voice control system lets you speak any of a series of ‘direct access’ commands (listed onscreen so you don’t forget them): Smart Hub, Search All, Allshare Play, Family Story, Fitness, Kids Home, Samsung Apps, Your Video, Skype, Web browser, Camera, My Mirror, Current Time and e-Manual.

Even better, if you’ve got the universal remote control functionality set up along with the remote extender that ships with the TV, you can change channels on, say, a Sky receiver box just by speaking the channel number you want!

This is just the start, though. For the TV’s ability to recognise sounds rather than just common words means you can say pretty much any words or phrases into online search engines. Inevitably the system isn’t foolproof, but so long as we were reasonably precise with our diction, the TV recognised most things from ‘how to cook an egg’ through to ‘Fabio Capello’.

The third thing that makes the UE55ES8000’s voice control system a surprise hit is that it’s only very rarely triggered ‘accidentally’ by general ambient noise or conversation. The reason for this is that the system is only called into play by a special keyword – Hi TV, in our case. Until it hears that, it stays hidden away in the background.

In fact, only four times in three days of extensive use did the voice control menu accidentally appear. On each occasion we were watching action scenes at the time, which seemed to cause the system to become concerned that there was too much ambient noise around for it to be able to hear our commands properly. With this in mind you might want to turn the system off when having a serious action movie viewing session. But for the vast majority of the time – and much to our surprise – we found we preferred to leave the system switched on. And once we’d used it a few times, we also found ourselves much less embarrassed to be talking to our tellies than expected.

The way it works is pretty much as you would expect. The camera built into the top of the TV detects your hand, and tracks its motion to move a hand cursor on the screen. And you close your hand to ‘select’ a part of the screen once you’ve navigated the hand cursor to it.

However, we found a number of problems with the system. First, even though we found the camera in the UE55ES8000 to be of a surprisingly good quality, it only works if your room is quite bright. In fact, it still failed to register any hand activity even with all the spotlights in our office turned right up, only becoming functional once we’d also opened all of our curtains. This is hardly conducive to the sort of environment AV enthusiasts usually like to watch their TVs in.

Even once we’d got the system working, we found it really difficult to achieve the sort of sometimes small movements of the ‘hand’ cursor needed to select specific parts of the screen, like ‘text input boxes’ in the TV’s Web browser.

This issue, together with the fact that we found the system only worked with much accuracy if we held our hand clearly away from our face and body, means that using the gesture control system actually becomes quite tiring on your arms quite quickly.

Another problem with the gesture control system is that during our tests it popped up uninvited a few too many times for comfort. The main reason for this appeared to be that it kept mistaking movements of our head for ‘wake up’ hand gestures. Annoying.

Finally in the negative column, while we got surprisingly used to speaking to the UE55ES8000, we never really felt comfortable – as in, non-stupid! – waving our hands around at our TV.

With so many things against it, then, why did we describe the gesture control system as an ‘honourable’ failure? Because we can at least appreciate its potential. For there’s no doubt that using your hand to navigate around screens with lots of links – especially Web pages – is more ‘natural’ and less time-consuming than using a traditional remote.

So we guess we’re not necessarily completely writing off the idea of gesture control; rather we’re just saying that it needs much more refinement before it might become something we could see ourselves using routinely.

It’s worth adding here that the camera built into the UE55ES8000 for tracking hand movements plays a further key part in Samsung’s alternative control systems for its latest flagship TV. For it introduces facial recognition to a Samsung TV for the first time, which can be used for automatic switching between different user profiles for, say, the Fitness section of the Smart TV system.

The final control innovation Samsung has introduced with the UE55ES8000 is the touchpad remote. This unusual-looking handheld device ships alongside a more ‘normal’ remote, with its key difference being that it only carries a handful of buttons, with most of its ‘active’ space being taken up by a touch-sensitive tracker pad. You can thus navigate around Web pages or Smart TV menus screens just by sliding your finger around on the pad and selecting options by pressing the pad in.

This remote also, cleverly, includes a mic for use with the TV’s Voice control system. This means you don’t have to raise your voice as much as you do with the audio receiver in the TV. 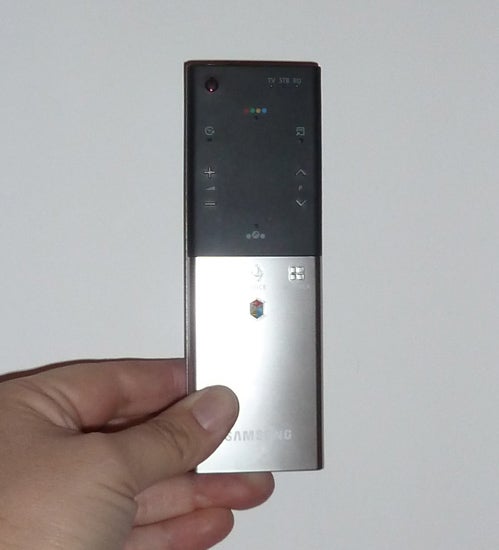 After a few minutes of getting used to it, this trackpad remote really starts to impress. The sensitivity to your finger movement seems well judged and accurately connected to the onscreen cursor movement – once you realise that there’s no point in trying to sweep your fingers across it too quickly. And the combination of the touch pad and the voice recognition system starts to make surfing the Web or exploring the TV’s features and options much easier than just using the standard remote control.

Our only significant complaint about the touch pad remote is that quite often when you try to press the pad in to ‘select’ an option, your finger accidentally moves slightly across the pad and thus moves away from the item you’re trying to select. Maybe a separate ‘select’ button would have been a better idea.

Verdict
The more Smart TVs develop, the more obvious it is that they need to be joined with innovative new control methods. So it’s great to see Samsung’s first TV of 2012 taking the bull by the horns and integrating no less than three cool new control systems. Especially as two of them, at least, really do work surprisingly well.