It seems appropriate that I am writing about Samsung’s SGH-X830 just as the chat about Apple’s newly announced music playing iPhone reaches fever pitch. This phone is a combination of music player and Tri-band phone that is designed like no other combination of these two features I have ever seen.


The Samsung SGH-X830 looks more like a portable music player than a phone – it is tall, thin and undersized for a mobile – the dimensions are 84 x 30 x 19.9mm. It weighs 72g, which is less than any mobile I can remember seeing and supports MP3, ACC, ACC+, e-AAC+, WMA file formats.


My review sample came from O2 and has stunning white and silver casing. It is also available in pink and black. I will refrain from raging against those colours here, but read my latest editorial to the editorial for a whinge.


The front fascia comprises a tall, thin screen – 19mm wide, 32mm tall and 128 x 220 pixels wide – and a wheel for navigation. This is all very music player like, and when you press and hold the navigation wheel’s central select button the music player springs into action and the display activates in wide format to show you what’s playing. 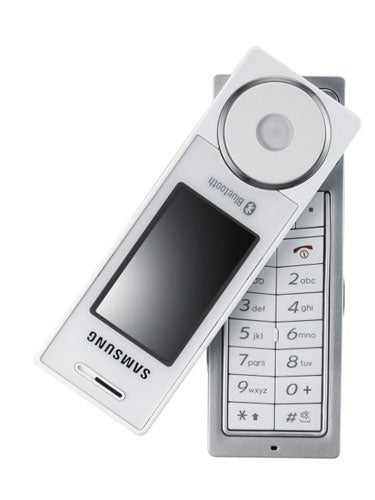 The navigation wheel’s centre button will now pause and resume playback, while pressing the wheel at the top opens the playlist, left and right skip back and forwards between tracks, and pressing the wheel at the bottom opens the music player controls and options. From here you can edit playlists, send files via Bluetooth, set a tune as a ringtone and configure the shuffle and repeat settings. Two buttons on the top edge of the handset let you control music volume. 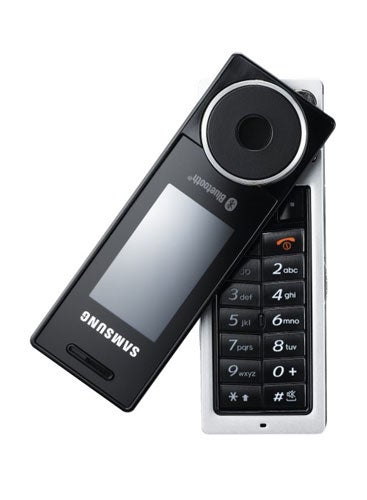 So where is the End Call button and what is this ‘phone mode’ and ‘music player mode’? The answer is all in the swivel. The Samsung SGH-X830 is made in two sections, which pivot around the central select button in the navigation wheel. The pivoting action is spring loaded and feels very slick, though it only works in one direction and you’ll need to practice a bit to get the knack just right. Open the phone up and a two column numberpad is revealed.


This houses Call and End buttons, two softmenu buttons and a combined cancel and camera launch button. The navigation wheel turns into a scroll-or-click navigation button while its central select button becomes a Web browser shortcut. You can lock these keys with the only other side mounted button, marked ‘Hold’.

I found the two-column number pad easy to get used to, though if you are a frequent texter the very different alpha-key layout may prove quite painful at first.


Getting tunes onto the phone is achieved by download from the Web, Bluetooth transfer or from a PC either by synchronising with Windows Media Player or using Samsung’s PC Studio software. This is provided on a CD and accompanied by the necessary connection cable – USB at the PC end, proprietary at the Samsung SGH-X830 end.

Whatever option you choose, music goes into the phone’s internal memory of which there is 1GB. There is no option to expand this using flash memory cards. I think this is a major drawback. With players like SanDisk’s Sansa e280 offering 8GB and a microSD card it could end up being a clincher on the ‘to buy or not to buy’ question.


Music player quality was fine to my ear and to its credit Samsung provides a two-piece headset which uses the same proprietary connector at the handset end as the PC cable and mains power but has a 3.5mm jack after its microphone so you can use your own favourite headset easily.


On the downside while you can go into offline mode for music listening you can only do this via the Settings menu and it requires no less than five key presses. Then later you’ll need to make another five to get back into online mode.

For all its novelty of combining music player and phone Samsung has not forgotten to include a camera – I mentioned its shortcut button earlier. With a maximum image resolution of 1.3 megapixels it is decidedly behind the times. It is also somewhat fiddly to use and its performance is disappointing.


I found it difficult not to put my finger over the lens when taking shots because of its position and the fact that the handset is so small. The size of the screen made framing photos rather difficult, though if you are used to using clamshell front screens for this purpose you might be able to get on with this OK.


As for image quality, as usual I left the handset to make up its own mind what to do about conditions, shot at the highest resolution available and set picture quality to super fine. The results were passable but no more.

My standard reference shot of the coloured dish was grainy and its colours less than vibrant. Outdoor shots often suffered in colour definition too. The pure gold of the catkins is reduced to a pale mustard shade. On the other hand the snowdrops are fairly well coloured, and I was surprised that the camera coped with this shot as it was taken no more than 12 inches from its subject.


The screen is a major problem with this phone because it simply isn’t big enough in many circumstances. Web browsing is technically possible but viewing in the tiny screen is difficult. Reading SMS messages is OK but not wonderful, and so it is with other applications, which include a calendar, voice recorder, alarm, calculator, various unit converters, timer, stopwatch and memo maker. 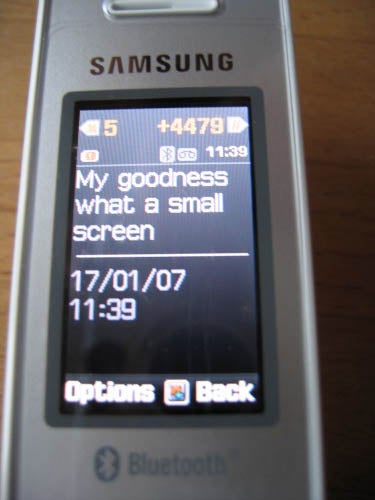 Battery life proved very impressive. Continuous playback of MP3s from the internal memory off a full battery charge delivered over sixteen and a half hours of music. That’s well up there in comparison with standalone portable music players.


Serious compromises have been made here and they’ll make or break your decision to like or loathe this handset. If you want a phone that can handle web browsing and display a detailed calendar view, then this isn’t going to suit you.


But if you want a phone primarily for voice calls and texting and you’re also a music fan who doesn’t need more than 1GB of storage, then this could be just what you need. 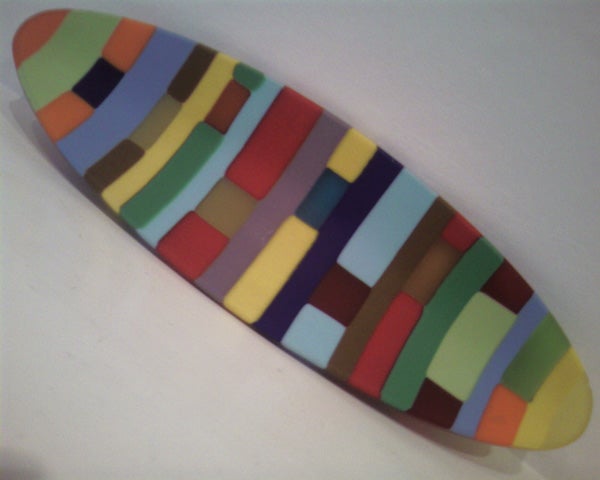 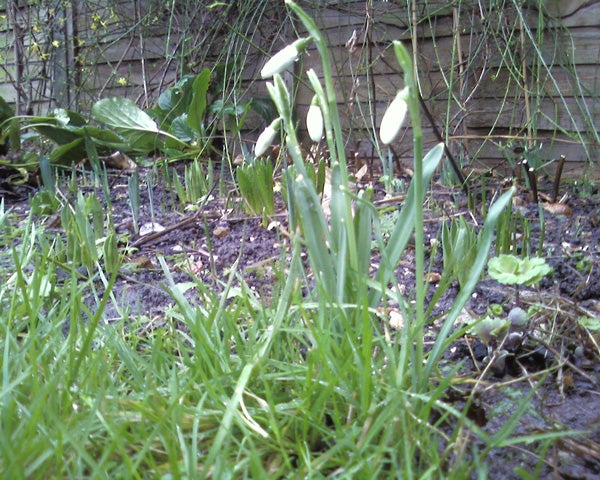 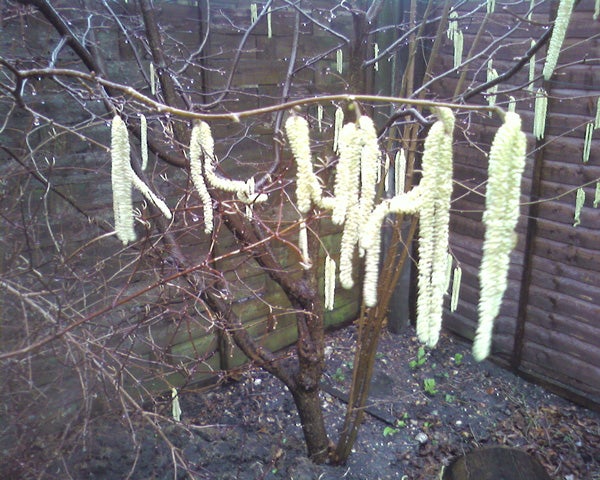 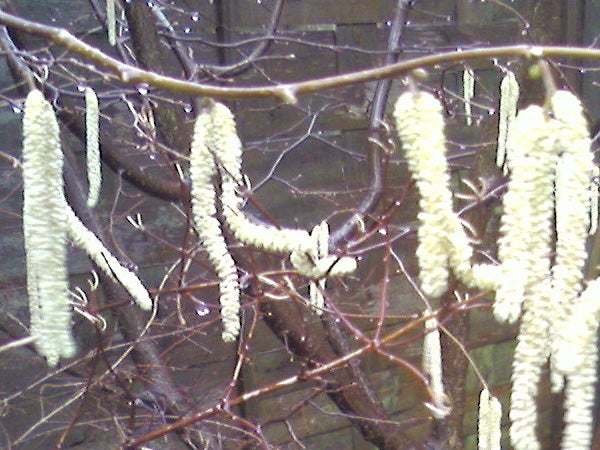