Samsung is a pretty prolific maker of smartphones and consumer phones, and it has come up with some interesting takes on both concepts in the past.


On the mobile phones front it has produced some great handsets. I am still smiling about the SGH-F700. The company also sometimes bemuses. I remain a little confused by the twisty and small SGH-F210 and the two-faced SGH-F300. On the smartphones front Samsung usually impresses, though, and the SGH-i600 was a case in point.


The SGH-i640V, though, is not an all round winner, and I’ll get to why as this review progresses.


Exclusive to Vodafone as I write, this is a tri-band 3G slider running Windows Mobile 6.0 in its non touch-screened smartphone incarnation. 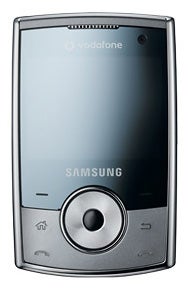 You’d not be rash to surmise from that fact that that the SGH-i640V is designed for those whose communications are more voice-centred than data oriented. But think again, as the SGH-i640V is a slider and beneath the slider mechanism hides a full QWERTY keyboard.


Sliders with QWERTY keyboards don’t lend themselves to tiny proportions, and that is illustrated well here. The SGH-i640V is 95mm tall when closed, rising to about 133mm when opened. To be fair, that isn’t wildly off the mark you’d expect from a slider. But this is a wide beastie at 61mm which does make it a bit of a challenge for some pockets.


There are two thickness measurements. This is not because the SGH-i640V is constructed in some sort of ultra quirky wavy way, but because it comes with two batteries, one longer life and therefore thicker than the other. The official thickness measurement at the Vodafone web site is 16mm which is accurate for the standard battery. The extend life battery brings the thickness to a more generous 18mm. 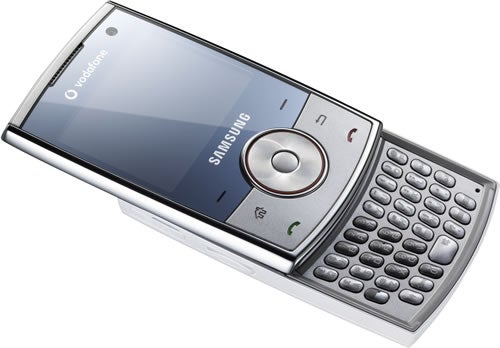 This has an obvious ramification for weight too. With the standard battery in place the weight is 126g. Slot the extended life battery into place and you are toting closer to 160g.


The good news is that with both batteries fully charged battery life is superb. I ran my usual rundown test on both batteries, asking the SGH-i640V to play music without stopping and with its screen forced on. The standard battery gave me a minute less than seven hours and the extended battery managed nine hours 22 minutes. Taken together that gives you a battery life of 16 hours 21 minutes.


The SGH-i640V ships with a battery charging unit. This is quite sizeable in its own right, but if you are prepared to carry it, as well as the proprietary charge connector Samsung likes to use, then you needn’t worry about battery life.


Having mentioned the proprietary charge connector, I’ll just add at this point that the headphones share the connector, and they are one-piece. Obviously, this means that if you have a favourite set of headphones with a 3.5mm jack, you can’t use them here.

Let’s talk touch buttons at this point. I am not a fan, which makes using the SGH-i640V challenging since all the front buttons, Call, End, two softmenus, Windows Mobile Home and Back, are touch buttons. If one thing puts me off this smartphone, it is these buttons.


I really like the way Samsung has made the navigation button a wheel which you can swivel as well as nudge in up, down, left and right configuration. I’ve seen this before on Samsung devices, and it works well for me. The QWERTY keypad is not too bad either. Its keys are tall and thin, and angled out slightly from an imaginary central vertical line. I found them quite comfortable and easy to use at a fair old lick.


The SGH-i640V runs Windows Mobile but it doesn’t look like it at first glance. If you remember my review of the Palm Treo 500v (on Vodafone) back in the latter part of last year you’ll recall that it sported a fancy new interface. 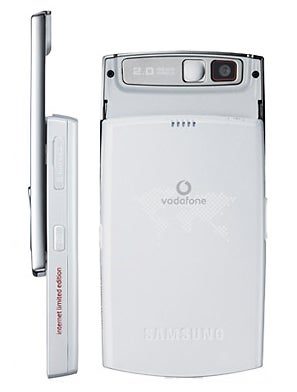 The SGH-i640V does it again, and while I rather like the different look it gives to things it can take a little getting used to. When you hit the Start button you are taken to a screen that offers a horizontally scrolling set of application and information groups. Highlight one and you can scroll vertically through the options it offers.


The groupings are not all going to be familiar to Windows Mobile users. Music and Video, Recent Photos, Message Centre, Favourite Contacts, Upcoming Events and My settings, are complemented by groups for Windows Live services, Recent Programs and Live! which provides access to Vodafone Live!, Google Maps and Mobile TV.


As you scroll through the list the softkey buttons change their functions. In theory this allows you quick access to features, and it does in practice too, but you may need to spend some time familiarising yourself with everything if you are migrating from Windows Mobile on a more standard-looking device.


You can get to the Windows Mobile main menu from all this, though, and if it really proves alien there are some other user interface choices including a few Samsung specific ones and some that are much more standard Windows Mobile fare. Between the many on offer you should find something you can work with.

There is a front-facing camera for video calling. The 2-megapixel main camera is not much to write home about but it has a self-portrait mirror, and its back facing lens is hidden behind the slide when it is not needed, which should help with protection against scratching.


The side-mounted camera button has long and short press functions; with a short press taking you to the Windows Mobile ‘Quick List’ profile switcher and a long press activating the camera itself.


With the camera active, pressing up and down on the navi button accesses zoom while pressing left and right controls white balance. The camera options available are pretty standard, with the main novelty being a ‘mosaic’ shooting mode that lets you combine four pictures into a single one by shooting four segments one at a time. 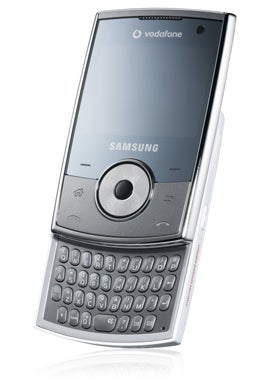 There is Bluetooth in the SGH-i640V but not Wi-Fi, and in leaving the latter out Samsung is missing out on a trick that higher end Windows Mobile devices and other smartphones are adopting pretty much as a matter of course these days. Its absence is becoming rather a serious omission.


There is a microSD card slot for adding to the built-in storage and this is located on the right edge and protected by a hinged cover. Internally, after a hard reset, my review sample reported 141MB of available storage, 85.8MB of available memory.


I can’t help feeling a little let down by the SGH-i640V. I found the touch buttons irritating, the overall size a little too much for my hand and pocket, and the proprietary connectors for headphones and mains power a pain.


On the plus side, life away from the mains is amazing thanks to the twin batteries and the QWERTY keyboard is easy to use.