Lately, Samsung has been pushing hard to make a name for itself when it comes to smartphones. We’ve had big launches like the Omnia i900, but the SGH-i200 has been squeezed out with less fan fare. This is probably due to the fact that the handset is aimed more at business users than trendy young things.


The SGH-i200’s main claim to fame is that it’s the thinnest smartphone on the market. Or at least it is according to Samsung. In reality it’s not much slimmer than other skinny models we’ve seen like the Motorola Q 9h. Nevertheless, for a business device it scores unusually high in the looks department. Not only is it superbly slinky measuring just 11.8mm at its thickest point, but it comes suited and booted in an appealing glossy piano black finish.

The front of the handset is naturally dominated by its 2.3in screen. This has a resolution of 240 x 320 pixels and is not only bright, but also produces rich and vivid colours. However, it’s framed by quite a large blank border area which means that Samsung could have been a bit more generous with the screen size. Nevertheless, the display does have a neat extra feature: a built-in light sensor means that the screen is automatically dimmed in lower light conditions to help eek out a bit more life from the battery.


When it comes to controls, the i200 has a fairly run of the mill line-up of buttons. Beneath the screen there’s a metal wheel that looks and feels like it should act like the scroll wheel found on other phones such as Samsung’s own older i300 device but unfortunately it turns out to be a bog standard four-way D-pad with a selector button in the middle. These are joined by a volume rocker switch on the left-hand-side and a dedicated camera button on the right.


The keypad is a standard numerical affair rather than a QWERTY one, but at least the buttons are large and responsive and you do get decent sized home and back keys as well as two dedicated soft keys along with call setup and hang-up buttons

The i200 runs Windows Mobile 6.1, the latest version of Microsoft’s Smartphone OS. No one is going to argue that the ever clunky Windows Mobile is the perfect phone OS, unless they live in an institution with padded walls, but at least 6.1 does offer some extra functionality. For example, SMS messages are now threaded making it easier to keep track of conversations and text editing has also been improved so you can now cut and paste between emails, SMS messages and text boxes in internet explorer (a very small poke in the eye for the iPhone).


Samsung has also included the Office Mobile bundle complete with Onenote, a kind of sketchbook that lets you combine text, voice and picture notes into a single document. You don’t usually get the Office Mobile bundle on non-QWERTY smarphones, so its presence here is a bit of a boon, especially as it lets you not just open and view Word and Excel documents, but also edit them directly on the phone. 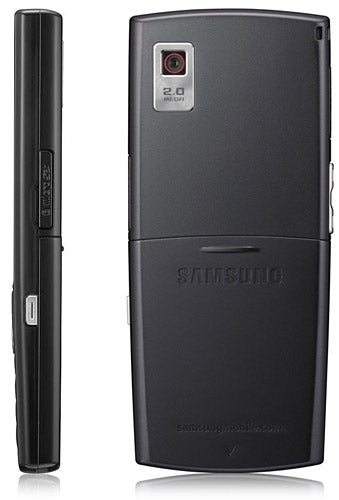 You also get a few of Samsung’s own mini applications including an RSS reader and a content manager that gives you fast access to your documents, pictures and also the memory card. In fact, you’re likely to have to make considerable use of microSD cards, as the phone’s onboard 20MB of free memory isn’t exactly bountiful.


In use, the i200 feels relatively sprightly for a Windows Mobile device. Screen redraws are pretty much instantaneous and there’s not much waiting around when scrolling through menus or performing other day-to-day task. Thanks to the support for HSDPA picking up email or using the browser when you’re out and about is also fast and responsive. However, the phone lacks Wi-Fi, which is a bit of a travesty in this day and age when almost every other smarpthone on the market has it built-in as standard.

To go along with the HSDPA support, Samsung has included dual camera functionality; one for video-calling on the front and another 2.0-megapixel one on the rear. In truth it’s a fairly basic affair as it lacks autofocus and doesn’t include a flash. The snaps it takes are pretty average with decent colour and clarity when working in brightly lit or outdoor conditions, but under poor lighting it really struggles to produce passable shots.

On the plus side, however, call quality was generally excellent with the mic and speaker producing clear and crisp audio. It even does a fairly good job when working in speakerphone mode, although the speaker isn’t really loud enough to use in overly noisy environments. In terms of battery life the phone puts in a pretty decent performance. With light to medium usage for phone calls, web browsing and music listening we got about two and a half days out of it, which is not too bad for a smartphone.


There’s not a whole a lot else to get excited about here because along with the lack of Wi-Fi the phone doesn’t include a GPS chip, something else which is fast becoming standard on today’s smartphone. There’s also no FM tuner, although as it’s primarily aimed at business users we can forget it this failing.


Overall, the i200 is a bit of a mixed bag. It’s certainly got a decent dose of style and there are some nice extras here like the inclusion of the Mobile Office pack. However, the i200 also falls short in several areas, not least of which is the baffling exclusion of WI-Fi and the disappointing absence of GPS. So, although the i200 is a nicely packaged smartphone, it simply doesn’t have a broad enough range of features to really stand out from the crowd.