You can say what you like about Apple and its hoards of slavish, sheep-like devotees. You can criticise it for over hyping certain products, and you can moan about the fact it’s so secretive. But you cannot deny that, regularly, it manages to churn out top class products.


The iPhone, for instance, may not be everyone’s cup of tea, but I don’t know a single hard-bitten hack who has used the device who hasn’t fallen in love with its beautifully-designed GUI and almost perfectly executed touch-screen hardware interface.


Another indication of the popularity of a product is the number of companies and products attempting to copy its key ideas and use them. And the iPhone looks as if it’s going to have a pretty powerful influence here too: 2008 is set to be the year of the touch-screen and Samsung’s F700V is in the vanguard of products looking to knock Apple from its perch. 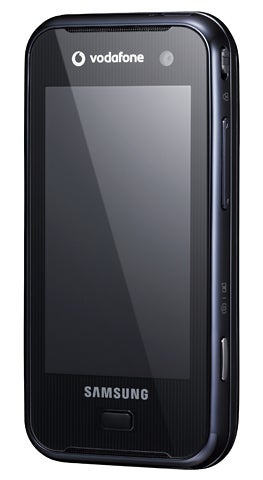 It’s a product that has great potential. Unsurprisingly it’s very similar in size and shape to the iPhone – it’s thicker at 17mm but otherwise there’s not too much in it. It looks pretty good too with its glossy, pinstriped front fascia and minimalist design. There’s just a single button adorning the front of the phone – just like the Apple device – while a mere three controls sit along the long right-hand edge: the trigger for the F700V’s three megapixel camera, a two-way volume rocker and a switch for locking and unlocking the device.


The F700V is, as you’ve probably already guessed, a touch-screen device, and one that you’d probably also expect to be inferior in quality to the iPhone, but the F700V has a couple of important advantages hidden up its tightly-tailored sleeve. The first of these is vibration feedback. Whenever you hit a button on the F700V’s 3.2in 240 x 440 screen it responds with a quiet beep and a light buzz. It sounds frivolous, but this feature contributes so much to the feel and usability of the interface that I wonder why other manufacturers haven’t done the same thing. It’s like having the best of both worlds – the flexibility and adaptability of a touch-screen, but with the feedback of physical buttons.

The second weapon in the F700V’s considerable armoury is its keyboard. It’s hard to believe given how slim this phone is, but stashed away below that lovely screen is a full, QWERTY keyboard. And even more impressive than this is the fact that it’s quite possibly the most practical small keyboard I’ve ever used. It’s better than my TyTN II’s keyboard by quite a considerable margin and the backlit, well-separated rectangular keys make it ridiculously easy to type at speed. I’m sure it’s possible to type quickly with the iPhone’s on-screen keyboard after some practice, but – and you’ll have to trust me on this one – it’s not a patch on this. 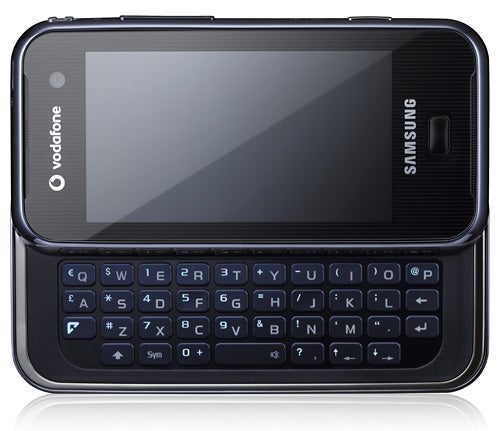 Next consider the fact that the F700V has quicker Internet connectivity than the iPhone with HSDPA at up to 3.6Mb/sec, pretty good battery life at around two to three days normal use, POP3 and IMAP support, plus Vodafone’s own £5 per month ‘consumer push’ email option, and it looks as if, surprisingly, we have a potential winner on our hands. The F700V also has Google Maps preinstalled and cocks a snook at the iPhone by including a proper 3.5mm headphone jack (hallelujah!) so you can use any decent set of headphones without needing an adaptor. The phone even comes with an adaptor in the box that turns your own headphones into a hands-free set, but unless you already have a decent pair, the Bose earphones supplied will be perfectly adequate.


What’s slightly less surprising is to find that Samsung’s software design puts a bit of a dent in its iPhone-killing ambitions. It does make a pretty good stab at making its very own touch-screen statement, and to a large extent the software works well – certainly better than the software I’ve used on Samsung phones before – but it’s just not as elegant and intuitive as the iPhone’s.

I liked the fact that clicking the single button on the front takes you to a simple shortcut menu where most main functions are located. It has the same sweep-your-finger scrolling method as the iPhone does both for lists of music and panning around web pages. And there are other nice touches – while playing music, just dragging a digit up and down the screen adjusts the volume. But there are areas of inconsistency. Some buttons are single click while others need pressing twice; it’s hard to get back to the main music screen from the album or track view; and in some views the button on the front doesn’t work at all.


The biggest problem for the F700V is that it simply isn’t as effortless to control as the iPhone. The web browser lets you view pages as they were meant to be seen, for example, but it simply runs too sluggishly to be of any practical use – zooming in and out is a painful affair – while scrolling through lists of options doesn’t feel as precise either. You often over-shoot because you’ve been scrolling too quickly, while clicking links on web pages can be hit and miss.

There are other irritating quirks and shortcomings too. To sync the phone using the bundled Samsung PC Studio software, inexplicably you have to have the phone on its home screen or it won’t connect, and that’s aside from the fact that the software isn’t as elegant as either ActiveSync or iTunes (though it will allow you to sync with Outlook and Outlook Express). The USB interface also makes it impractical to transfer music regularly in any kind of quantity to and from the F700V. The sound quality is solid and the music player on the phone is good, supporting a wide variety of formats (MP3, AAC, AAC+ and WMA), but it takes an astonishing 1min 40sec to transfer a simple 5.6MB MP3 file, and at that kind of speed it’s going to get frustrating, fast. 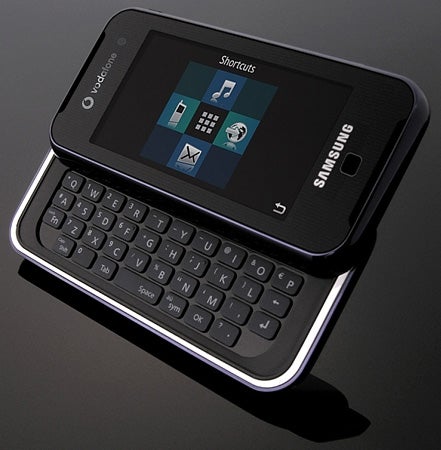 Despite this appallingly sluggish performance, the microSD slot is hidden underneath the backplate, which makes the only practical way of transferring music just as annoying in its own right, and there’s no Wi-Fi either, so that route’s ruled out too. The music download options are reasonably well thought-out. You can either use the bundled MusicStation software to do this (unlimited downloads for £1.99 per week) or the Vodafone Music service (£5 per month for seven tracks) to download tracks and it all works pretty well. But there’s virtually no space on the device to store music anyway – just 100MB is tiny compared to the 8GB iPhone.


The cost of owning the phone, at least while it’s exclusive to Vodafone, is also a disappointment. The phone is free on £30 per month contracts and above – which is nice – but you have to pay £7.50 per month extra for Internet access and this gets you a measly 120MB per month. It’s still £224 cheaper over 18 months than the iPhone, but the lack of an unlimited data deal leaves a sour taste in the mouth.


It’s a shame about the irritations, because Samsung has a phone here with massive potential. Its keyboard is superb, it has HSDPA where the iPhone is limited to GPRS, its touch-screen works well most of the time, and the vibration feedback is a thing of genius.


There’s no doubt that the F700V is a very, very good phone, and if it were available with a more generous data tariff I’d have no hesitation in recommending it as a great value for money alternative to the iPhone. But despite all of its plus points there are just too many buts and if-onlys right now to make it a truly compelling choice.