The Samsung Series 9 laptop was never meant to be about gaming, and that’s re-stated in the kind of screen used. It has a matt finish, which is relentlessly practical for outdoors use, being all-but immune to screen reflections.

Glossy finishes are used in most laptops to give a more vibrant-looking image, but the Series 9’s screen is high-quality enough to negate the ‘dull’ preconceptions of matt screens. Colours are bold, viewing angles are excellent for a laptop and top brightness is great – looking at a white screen with the backlight maxed-out is uncomfortable. Samsung rates the screen at 400 nits – the average for a laptop sits around 250 nits.

As well as manual control over the Samsung Series 9 NP900X3D’s
screen brightness, there’s an auto mode that uses an ambient light
sensor in the screen surround to judge how bright the screen needs to
be. We recommend using this mode, as it works well, and it’s particularly useful considering Windows’ defaults will leave the screen at brighter levels than is necessary. 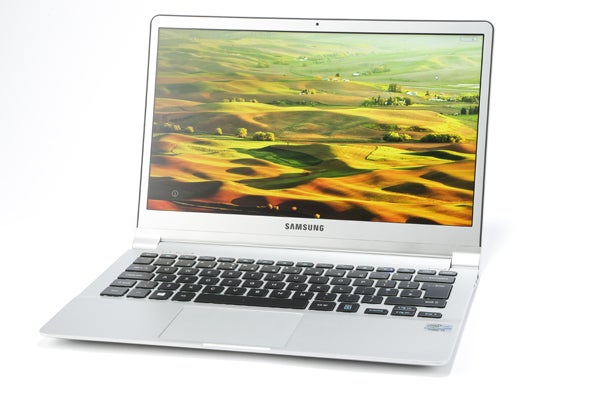 Its resolution is nothing to get excited about, though. The Samsung Series 9 NP900X3D has a 1,600 x 900 pixel screen, which is a way off the 1,920 x 1,080 of Full HD, which is becoming more common in laptops. And the up-front look of the matt display does highlight this, making pixels easy to discern in text – especially when browsing the web.

However, only those who are used to the supremely sharp text of the latest high-end tablets are likely to notice immediately, and for the price it’s unreasonable to expect more.

Although using an SSD means that the Samsung Series 9 NP900X3D doesn’t have masses of storage – just 128GB – it helps to decrease noise. There are no spinning platters with solid state drives.

The lack of optical drive has the same effect – no spinning discs means less noise in operation, even if the nostalgic among you may miss a DVD drive.

When strained, it’s the right edge of the laptop that’s gets warmest, suggesting this is where some of the hottest-running components live. Samsung seems to have designed the laptop so that heat is spread across the top and bottom, helping to avoid the knee-scorching effect that afflicts some portable laptops when under strain.

Using power-efficient components has a positive impact on heat as well as noise, and we found the laptop didn’t get any hotter than ‘warm’ in normal mid-level use. This also means the fan rarely has to rev its engines. Most of the time the Series 9 is near-silent. 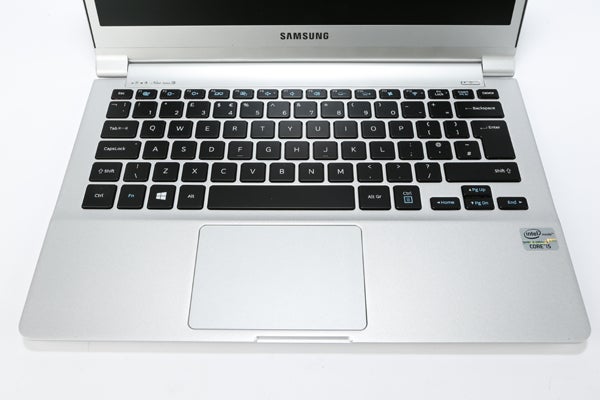 With a high-contrast black-on-silver Chiclet design, the Samsung Series 9 NP900X3D keyboard is a dead ringer for the Apple MacBook’s design. And it looks great.

It’s not just a looker, either. Its keys are well-spaced and have a firm, consistent action, and the layout is simple and intuitive. The one drawback, which affects almost all slim and light keyboards, is that the keys’ movement is a little shallow.

As we would expect from a high-end laptop like this, the Samsung Series 9 NP900X3D has a keyboard backlight that turns on automatically when needed, using the light sensor that sits above the screen. The backlight has a pleasant, soft green hue that lights-up both the lettering and the key’s edges. 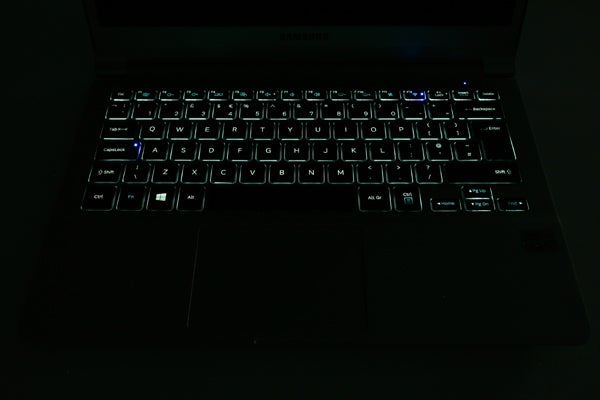 The laptop’s touchpad is a similar success. It’s topped with textured glass, which offers a silky smooth finish with just the right level of resistance.

Like most style-focused laptops, the touchpad’s buttons are built into the pad itself, and most of the pad is ‘clickable’. There’s roughly a 15mm expanse at the top that is non-clicky, and there’s a tiny dead zone in-between the zones for the two buttons – small enough that you probably won’t notice.

Used as our main laptop for the review period
Tested for at least a week
Used consistent benchmarks for fair comparisons with other laptops
Reviewed using respected industry benchmarks and real world use
Previous
Samsung Series 9 NP900X3D Review Next
Battery Life, Speakers and Verdict Review