The Series 9 range is Samsung’s top-end computing line-up, spanning laptops and monitors. In most respects, this year’s 13.3-inch Samsung Series 9 NP900X3D laptop is similar to last year’s version, updating its internal components rather than its bodywork. As such, it is still one of the most convincing alternatives to a 13-inch Apple MacBook Air, especially as it costs £100 less. 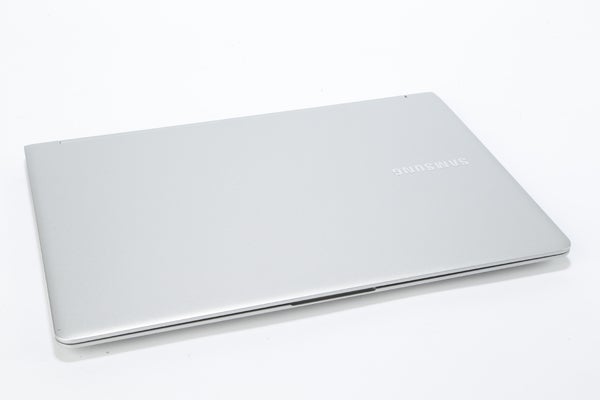 Don’t fancy reading our full review? We’ve also produced a video review that’ll tell you all you need to know and give you a closer look at what the Samsung Series 9 laptop looks like. Give it a watch.

A super-light, small laptop, the Samsung Series 9 is the kind of computer to look for if you need something that combines power with light weight. At 1.1kg, it’s around a third the heft of a powerhouse laptop, but it’s powered by a capable Intel Core i5 processor.

The Samsung Series 9 NP900X3D body is constructed of plates of aluminium alloy, using a near-identical design to last year’s model. It feels strong, it feels expensive, all without piling on any extra weight.

Although eerily similar, the Series 9 does feel ever-so slightly less well-constructed, as evidenced by the odd click that happens when you squeeze the right edge of the laptop. However, the combination of its expensive feel, its sub-15mm thickness and light weight impresses. 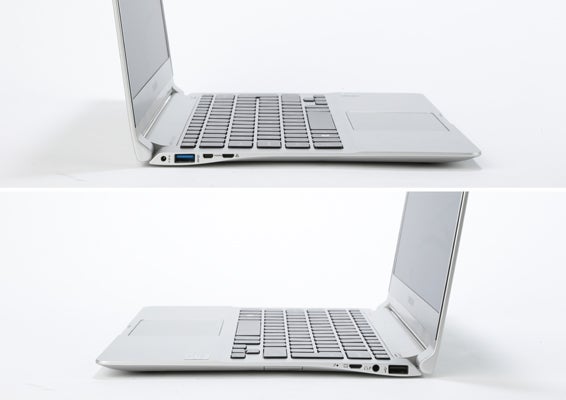 What’s crucial about the Samsung Series 9 NP900X3D’s 13.3-inch screen size is that it’s about as small as a laptop can get without making the keyboard too small to comfortably type on, or its body too dinky to happily sit on your knees.

What does suffer a little in the Samsung Series 9 NP900X3 a bit – as with any Ultrabook-style computer – is connectivity. There are two USBs, one on each edge (one USB 3.0), two video outputs in the form of a microHDMI and mini Display Port – again, one on each edge – a proprietary miniature Ethernet port and a headphone jack .

There’s also a clever full-size SD memory card slot built into the curvature of the laptop’s underside. This connectivity config is exactly the same as last year’s version of the Series 9 laptop. And although it will suffice for most, you’d get more USB ports in a larger laptop.

The Samsung Series 9 NP900X3D offers healthy mid-range performance, which is the best you can ask of a laptop this slim that also offers solid battery life. It’s not a gaming machine, but Windows 8 runs perfectly and it will be able to handle more advanced apps like Photoshop with relative ease, as long as you don’t lay on its tasks too thickly. It is not designed for video editors or those who need to perform hardcore image editing.

The snappy performance is down to the use of a fairly powerful 1.4GHz Intel Core i5-2537M CPU and a 128GB SSD, which enables faster boot-up times than you would get with a traditional hard drive.

From a light sleep, when the laptop isn’t left hanging for too long, it awakes within 2-4 seconds. From a full shut-down the Samsung Series 9 NP900X3D booted to the touch-optimised Windows 8 UI in under 10 seconds. These are commendably close to Samsung’s stated figures of 1.4 seconds from sleep and 8.7 seconds from a powered-off state.

What comes to define the Samsung Series 9 NP900X3D among its peers, though, is not speed but that it does not have a touchscreen. Although it boots to the touch interface as standard, you have to navigate through it using gestures on the touchpad. Touch the screen and all you’ll get is a display with fingerprints on it. This is a very traditional laptop compared to many other new Windows 8 devices at the price. 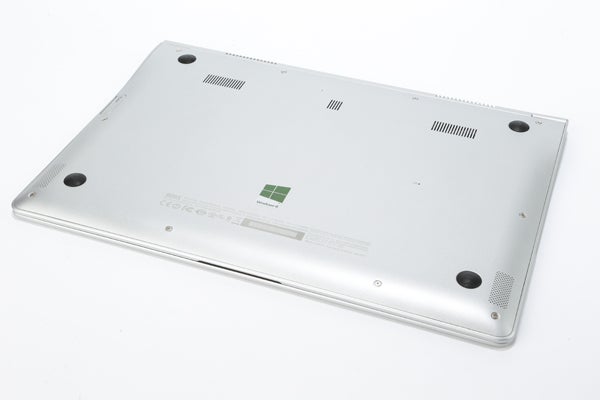 The mid-range performance is supported by our standard benchmarks. It achieved 2,897 in the PC Mark 7 bench, which is roughly what we’d expect from a £600 laptop without the design flair of the Series 9. It’s fine for most everday tasks and some more complicated ones, but its score is 40 per cent less than the Microsoft Surface Pro and its 1.7GHz Intel Core i5 processor.

There are several things holding the Samsung Series 9 NP900X3D back from true, desktop replacement levels of performance. First, its CPU is designed for power efficiency, and the speedier 2.5GHz i5-3210M CPU often found in cheaper, less portable systems is significantly more powerful. Second, it only has 4GB of RAM when more would come in handy for data-intensive tasks. Third, there’s no dedicated video card.

Fitting a discrete graphics chip into a shell this small without the whole laptop melting under use would be tricky, but be aware that the integrated Intel HD 4000 can only handle older games or less demanding newer ones at lower settings. However, this is something that has improved substantially since last year’s Series 9 laptop, thanks to improvements in Intel’s integrated graphics processors.

Used as our main laptop for the review period
Tested for at least a week
Used consistent benchmarks for fair comparisons with other laptops
Reviewed using respected industry benchmarks and real world use
Next
Screen, Keyboard and Touchpad Review