Although I do actually like my job, it’s not often that I can honestly say I’m actively looking forward to spending some quality reviewing time with a new TV. But the Samsung UE55B7020 is an honourable exception.


With its combination of a 55in screen, Samsung’s awe-inspiring ultra-thin edge LED design concept and, hopefully, the same outstanding picture quality noted previously on the set’s smaller UE40B7020 sibling, I really was prepared for the UE55B7020 to show me a thoroughly good time. Especially as its arrival coincided with the arrival of the latest ”Star Trek” movie on Blu-ray, and most excitingly of all, ”Call of Duty: Modern Warfare 2” on my Xbox 360… 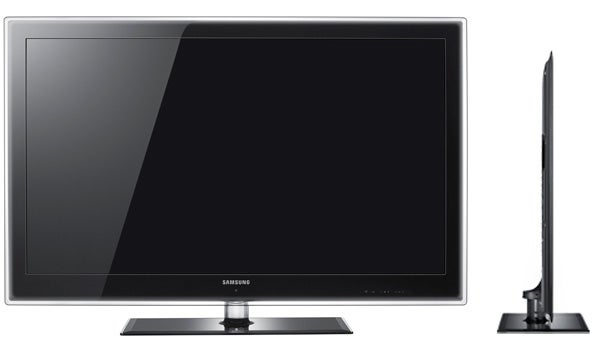 Not surprisingly, the UE55B7020 doesn’t disappoint in the slightest aesthetically. In fact, seeing the same 29.9mm depth I saw on the UE40B7020 applied to the rear of a screen as large as 55in across is an even more mind-blowing experience. Plus the sleekness of the bezel together with the see-through centimetre or so of ‘crystal’ that extends beyond the main black frame all looks somehow even better when delivered in such generous proportions. I should add, too, that I prefer the no-nonsense black colour scheme of the UE55B7020 to the red-tinged approach of the also-available 550B7000. 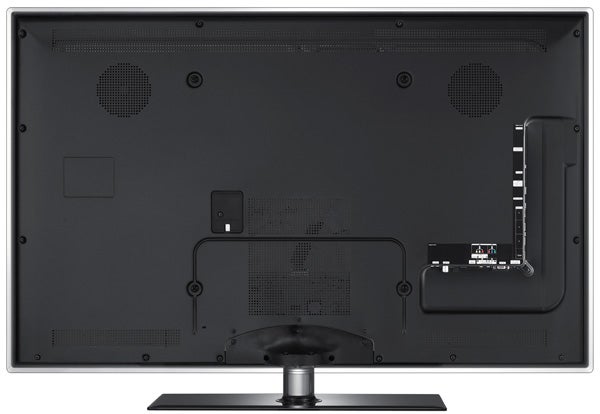 The UE55B7020 obviously sports the same connectivity as the UE40B7020. And it’s prodigious, with the stand-out options being four HDMIs, not one but two USB ports, and a LAN socket.


Looking at some of these in more detail, the USBs cater for direct playback of MP3 and JPEG files from USB storage devices, as well as enabling a wireless connection with your router if you cough up £40 or so for the necessary optional USB dongle. As for the LAN, it can be used for a hard-wired connection to the Internet, or for accessing files on a DLNA PC.

When I said the ‘Internet’ back there, obviously I wasn’t quite telling the truth. For unlike Philips’ 9000 Series, Samsung’s online TVs don’t access the Internet as a whole, but rather just a carefully controlled, walled-in section of it. Based on Yahoo’s Widget platform, though, the content level of Samsung’s service – dubbed Media 2.0 – is actually pretty good compared with the efforts of rival services from Panasonic and, especially, Sony.


Not that you have to go online to enjoy Samsung multimedia content on the UE55B7020. For it also sports the brand’s Content Library – a startlingly extensive collection of multimedia stuff stored on internal memory. Among the things you can explore are a gallery of artworks and photographs, viewable as slide shows accompanied by music; a selection of recipes (accompanied by some god-awful music); some very rudimentary games (COD: MW2 has nothing to worry about); a few songs and stories for children; and even some fitness tips and programmes. 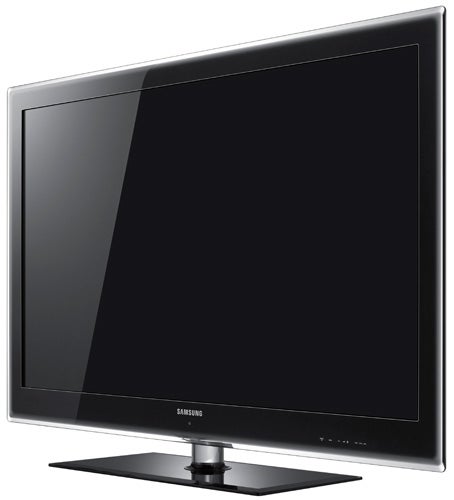 Intriguing though this sounds on paper, I repeat the point I’ve made in reviews of other Content Library TVs to the effect that I don’t currently find any of the content compelling enough to return to after an initial exploration. But maybe that’s just because my gaming and multimedia expectations are a bit higher than the norm!


The final UE55B7020 features worth getting into before, hopefully, being dazzled by another marvellous Samsung LED picture are its video processing combination of 100Hz and Samsung’s Digital Natural Image engine (DNIe); and the fact – mentioned in passing before – that its pictures are reproduced by an edge LED system, that can produce what Samsung none-to-modestly calls a ‘mega’ contrast ratio.


At first, it really does look like a case of business as usual for the UE55B7020’s pictures. Right away, I felt that initial buzz created by the set’s terrific combination of bold, richly saturated, accurate post-calibration colours, and startlingly deep black levels. 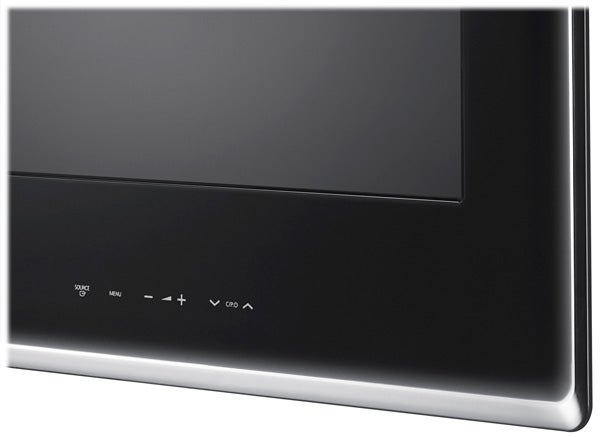 I know that on paper, edge LED lighting should not be able to produce the same dynamism as direct LED lighting, since it still has to reduce brightness to get convincing black levels, like ordinary LCD TVs do. But the UE55B7020 does every bit as brilliant a job of disguising this fact as its smaller sibling did.


In fact, the sheer size of the UE55B7020’s picture helps reinforce the image’s dynamism, especially as there doesn’t seem to be any loss in brightness despite the light generated by the edge-mounted LEDs having to travel further than it does with smaller screen sizes.


With HD, meanwhile, the UE55B7020 delivers mouth-watering levels of sharpness and detail. Indeed, again the screen’s size if anything makes the sharpness of HD sources even more gorgeous to behold – especially the console-generated, pixel-perfect glories of ”Call of Duty”. I lost count of the amount of times I got shot down because I was suddenly distracted by the sheer beauty of the image I found myself looking at. Well, that’s my excuse, and I’m sticking too it.


The set also handles motion remarkably well, no matter what direction it’s travelling in (as proven by a perfect score on the jaggies test of the HQV Benchmark Blu-ray). This makes the recently reported blurring of Sharp’s latest direct LED TVs even tougher to take.

The UE55B7020 even manages to look pretty decent with standard definition material, despite the unforgiving venue created by its 55in screen. Sure, there’s a touch more colour blotching around than I noticed with the UE40B7020, and noise – including stressy edges caused by the upscaling process – is more evident. But I’d still say it’s a good effort overall for such a big screen.


So why in the name of all things AV have I only given the UE55B7020 a score of 7 for its pictures when everything I’ve described so far points towards a 9 at least? The answer comes in two dreaded words: backlight inconsistency. 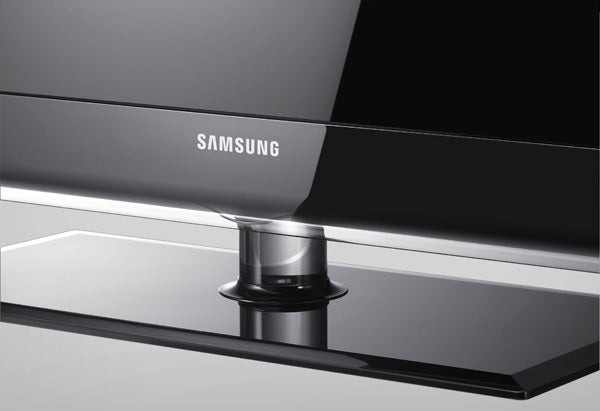 For it’s a sad fact that on numerous occasions while playing games and especially watching films on the UE55B7020, my attention was caught – no, make that grabbed – by some really quite overt shoots of light coming in from each of the TV’s corners.


A particularly distracting example of this can be seen, for instance, at various moments throughout the black and white sequence at the start of ”Casino Royale”, from the moment the MGM lion roars through to the credit sequence beginning. But it crops up again to a greater or lesser extent during any predominantly dark shot that happens to have bright elements within it.


So disturbed was I by this issue that I actually sent the UE55B7020 back to Samsung for them to have a look at. They checked it, found a problem with the diffuser plate, and sent the TV back to me. Only for it to still show the same problem. 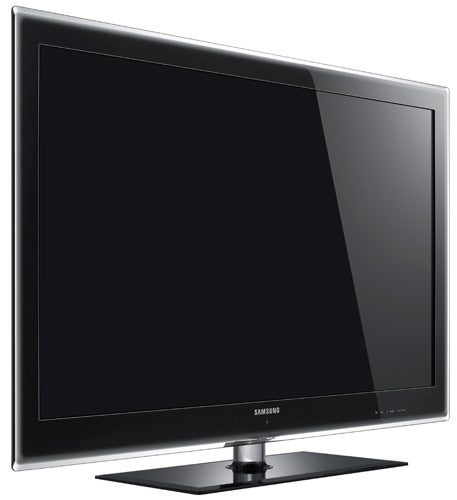 Given that I didn’t notice the same problem on the UE40B7020 or the larger 46in UE46B8000, I can only imagine that it’s caused on the UE55B7020 by the extra light intensity needed to drive the LED lights across the back of such a large expanse of screen. Understandable, then – but no less ugly.


The UE55B7020’s extra size, meanwhile, doesn’t help it sound any better sonically than the UE40B7020. Which means that while straightforward TV shows sound fine, the soundstage has nowhere to go when pushed harder, staying as resolutely flat and thin as the TV’s bodywork.


There were numerous times in the course of putting this review together that I wondered if I was being too harsh on the UE55B7020 by giving it a 7 for image quality. For let’s be clear about this – for the vast majority of your viewing time the UE55B7020’s images are nothing short of stunning.


But in the end I couldn’t help but think that anyone buying such a huge and potent TV would almost certainly be looking forward to watching a heck of a lot of Blu-rays on it. And if there’s one thing that nobody wants when watching a good film, it’s to be suddenly and reasonably regularly distracted by an obvious reminder of the technology that’s producing the picture.