The Samsung Series 7 Chronos has decent multimedia credentials. It offers plenty of power for a “style” laptop, and has branded speakers.
On the underside of the Chronos you’ll find a pair of grilles for the 4W-power JBL speakers. They’re set to extreme edges of the laptop, to ensure you don’t cover the grilles entirely when resting the laptop on your legs. 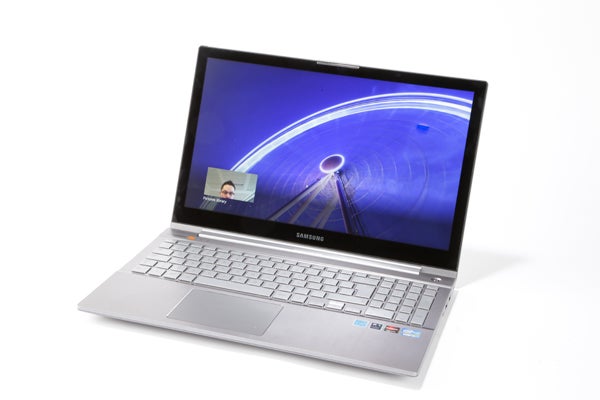 In a standard listening position, the sound is pretty well-balanced and detailed. Samsung claims to offer a “virtual subwoofer”, which appears to amount to using the Series 7 Chronos’s body cavity as a bass booster. It works reasonably well, giving the sound some body, but the Chronos still isn’t quite up there with the best, and loudest, laptops.

Continuing with periphery features, there’s a webcam and microphone mounted into the Series 7 Chronos’s screen surround. It features a 720p sensor.

While the high-end Intel Ivy Bridge CPU will attract the most attention from the tech crowd, the Samsung Series 7 Chronos’s SSD storage is the key to its day-to-day performance.

It’s this, alongside software optimisation that enables the quick start-up and recovery from sleep. In our real-world tests the Series 7 Chronos averaged a cold start-up in 35-40 seconds and recovery from Sleep in five seconds. This is a little slower than Samsung’s claims, but recovering from a quick standby tap on the power button does take under two seconds. Most real-life cases will be a wee bit slower. 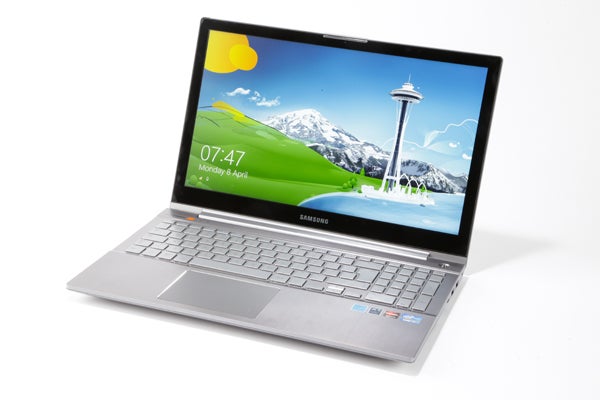 Any configuration of the Samsung Series 7 Chronos should be able to cope with any application you can throw at it. What’s particularly worth lodging in your cerebellum is that this laptop uses a quad-core variant of Ivy Bridge, where most competitors use the dual-core type.

It’s something that highlights the slightly odd positioning of the Chronos. It’s concerned with the same things as super-thin Ultrabooks but has a load more power on tap – with a little extra chunkiness and weight being the cost.

Aside from offering excellent productivity performance, the 2013 Samsung Series 7 Chronos also has a decent graphics card. It uses the ATI Radeon HD 8800M chipset, with 2GB of video RAM.

This is a brand new chipset for 2013, its hardware having only been revealed in leak form in late 2012. Its performance is admirable, especially in a laptop that is not an ostensibly gaming-obsessed device.

The Samsung Series 7 Chronos aced our classic STALKER benchmark, coming out with a more-than-respectable 67.7fps. Last year’s version scraped by with just 52.2fps.

This kind of performance puts it in competition with some of last year’s less OTT gaming laptops, such as the Alienware M14, and means it pastes any Macbook Pro that doesn’t have dedicated graphics – the starting price for one of those machines being a cool £1500. 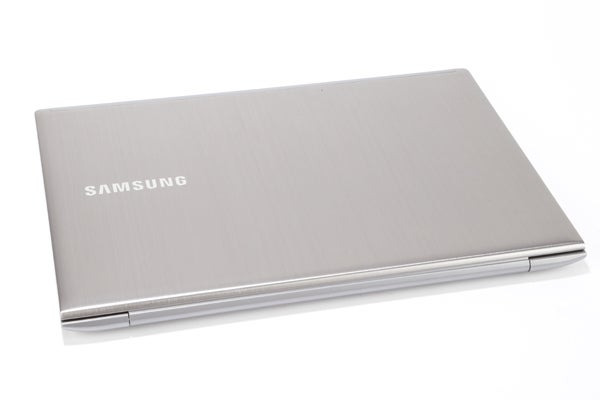 When put under significant strain, the Samsung Series 7 Chronos naturally gets a little hot, but this is largely kept to the plastic underside of the laptop. One benefit of using plastic is that it doesn’t dole out the heat of the device’s internals as quickly as metal. The main underside heat outlet is in the middle of the laptop’s bottom, directing the fan’s warm air output between your legs rather than onto them.

There’s also a secondary air outlet for the fan. The entire length of the inner part of the Series 7 Chronos’s hinge acts as ventilation, with an open grille. This is covered when the laptop’s closed too, so there’s no dust collection issues.

Power, practicality and good looks are all carefully considered in the Series 7 Chronos. One of the most important practical considerations with any laptop is battery life, and once again the Samsung comes up with the goods.

Samsung claims the Series 7 Chronos will last for up to 11 hours, but we found that will without disabling the dedicated graphics card, performance was a little more ordinary. In the PowerMark benchmark, designed to simulate everyday usage, the battery lasted for an impressive seven hours and forty-seven minutes. That’s with brightness set at 40 per cent – a usable but hardly dazzling level. 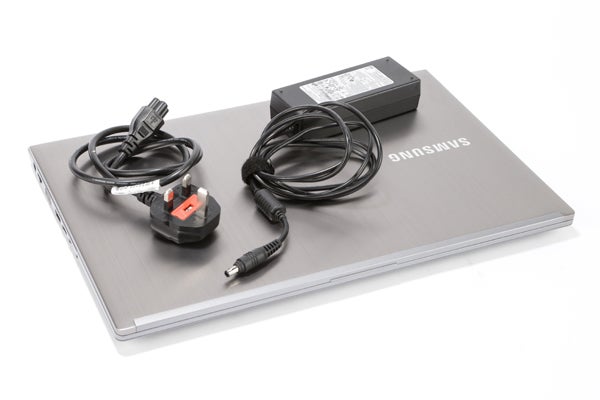 To get closer to Samsung’s states figures you’ll need to ensure that the dedicated graphics card won’t cut in, dim the screen brightness a little more and only partake in the least strenuous of tasks.

When putting the pedal to the metal, the battery life naturally dwindles away quickly. After 45 minutes of gaming, the battery status fell from 100 per cent to 75.

The Samsung Series 7 Chronos is a premium laptop in every sense. Some might feel that the £1,199 price point is steep but the components are excellent with the specs and performance make a mockery of some pricier laptops and Ultrabooks. A similarly priced Macbook Pro will set you back well over £1,500 and won’t give you anywhere near the gaming performance of the Chronos while the Lenovo ThinkPad X1 Carbon trumps the Series 7 Chronos in terms of performance we much prefer the aluminum finish of the latter.

The Samsung Series 7 Chronos is a worthy update to last year’s recommended model. It keeps the top-notch construction, and brings every other aspect of the laptop right into 2013. It has a great touchscreen, a high-quality display, powerful innards and impressive battery life given the power on tap. It’s not a laptop to buy if you want something to take around with you day-in, day-out as it’s just too heavy. But as a semi-portable desktop-replacer, it’s top-notch.