We don’t all have wads of cash burning holes in our pockets, and unfortunately that means we can’t all afford MacBook Airs or top-end Ultrabooks like the Samsung Series 9 900X3B. However, Samsung still has a very stylish offering for those after a more affordable 13-inch ultraportable: its AMD-based Series 5 535U3C.

Available for under £500, the Samsung Series 5 535U3C-A01 certainly doesn’t look like a cheap laptop. It sports a lovely brushed metal chassis and a matt screen, while on its inside we have some decent specs including a 2.1GHz AMD A6 processor, 6GB of RAM, and a 500GB hard drive. Can this slim and light ultraportable laptop win us over?

While not quite as stunning as its Series 9 laptops, it must be said that Samsung’s Series 5 535U3C need not be ashamed to be seen amongst rivals costing twice as much. At just 17.6mm thin at its thickest point and weighing just over 1.5kg, this is a remarkably slim and light ‘budget’ ultraportable made to look thinner still by its gently tapering edges.

Its materials also look the part with a brushed aluminium lid and fiber-glass re-enforced base. Fingerprints are not really an issue, though grease marks can be visible from certain angles. Basically, in terms of aesthetics the Series 5 535U3C shares a lot of its DNA with the Series 7 Chronos, and that’s no bad thing. 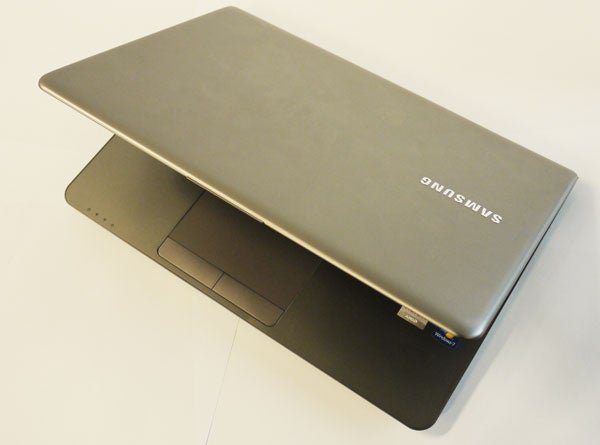 Build quality is concurrently good. Naturally it can’t match the solid slabs of aluminium that make up the Air and Series 9, but there’s no sign of unwanted creak or flex, panels are beautifully fitted, and it all feels very sturdy. The only exception is the hinge, which did protest audibly on occasion with our sample but still offered good action.

Connectivity is generous for a slim laptop. On the left you’ll find a slim Gigabit Ethernet jack, a USB 3.0 port, HDMI for video output, and a 3.5mm headphone/microphone jack. There’s also a discreet microVGA port which works with the included adapter.

On the right we have twin USB 2.0 ports along with a full-size SDXC card slot. Wireless is handled by the usual Bluetooth 4.0 and Wi-Fi N combo.

Thankfully, this Series 5 offers a pretty nice typing experience and excellent layout that’s very similar to that found on most of the company’s other 13-inch laptops. As you might expect, what’s missing here is keyboard backlighting, but at its price point that’s forgivable.

The matt black chiclet keys give a decent amount of travel with a nice click, and though it doesn’t live up to the superb keyboards on most Lenovo laptops, it’s still ahead of some of the competition. 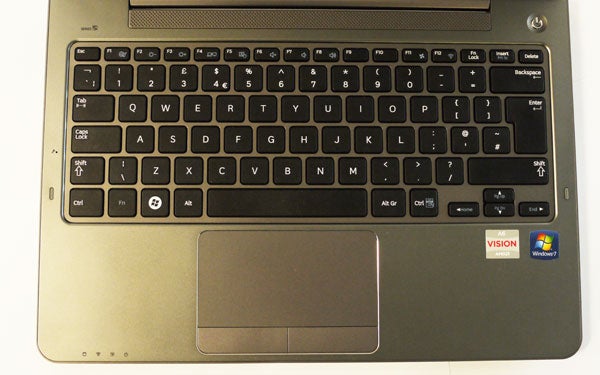 Unlike its higher-end siblings, the touchpad doesn’t integrate its buttons, an approach many will actually prefer since it prevents accidental clicks. There’s still plenty of room for multi-touch gestures on the comfy pad though, and its large buttons depress with just the right kind of click.

The Series 5 535U3C’s 13.3-inch display is fairly good as budget laptop screens go, despite being at first glance a rather disappointing TN panel with a bog-standard 1,366 x 768 resolution. For starters, as we already mentioned it sports a matt finish, meaning no annoying reflections. Viewing angles, while nothing to write home about, are also decent by TN standards, so you can watch a movie when sitting off-angle as long as you tilt the display right. 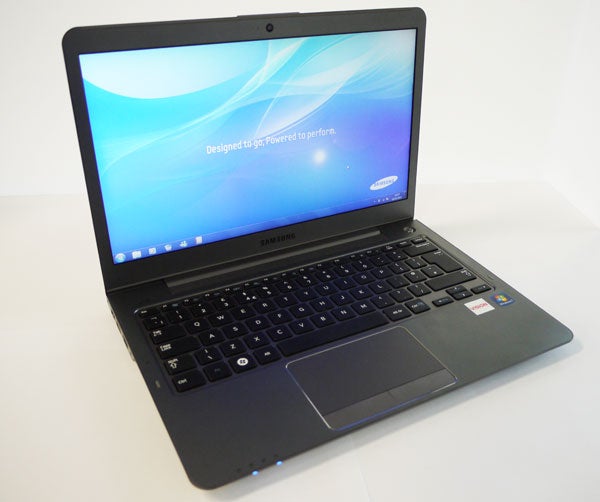 Colours are fairly punchy and, though blacks are far from deep, at least dark detailing is superb. Topping it off is even backlighting with no obvious bleed, making this Samsung Series 5’s screen one of the better budget laptop efforts we’ve seen. Still we can’t help but hope that the superior, high-resolution IPS panels so common in even affordable tablets like the Google Nexus 7, will soon become standard on laptops too.

On the audio side of things the Series 5 535U3C holds up well too. Though they’re short on bass and suffer from the occasional bit of distortion, this ultraportable’s stereo efforts produce audio that’s loud, has a sense of depth, and decent clarity at the mid and high end; headphones are recommended but not required.

As already mentioned, this Series 5 has an AMD processor at its heart. Specifically, you’ll get a dual-core A6-4455M which runs at 2.1GHz, along with AMD graphics. 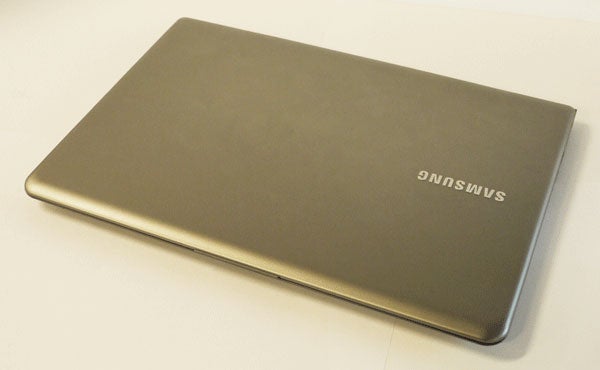 Unfortunately, as we already saw with the HP Envy 6-1006ea which uses the same AMD chipset, the processor part of this equation isn’t the strongest on the performance front and you’ll find that even an Intel Core i3 outperforms it regularly. Of course, you are paying less, and it’s important to remember that the A6-4455M is still good enough for daily performance and productivity.

Samsung also generously backs this CPU with 6GB of RAM rather than the usual 4GB. For storage, meanwhile, the Series 5 535U3C-A01 relies on a plain old 500GB, 5200rpm hard drive rather than one that enjoys some hybrid SSD love. This is probably the most limiting factor where everyday performance is concerned. The good news is that, unlike your average Ultrabook, this ultraportable is upgradeable. A simple flap at the bottom gives access to the RAM and hard drive, so it’s easy to swap in a pure SSD on the cheap. 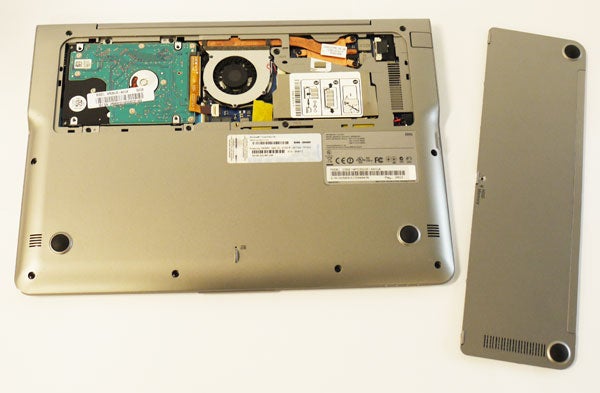 On the graphics side of things there’s an integrated AMD Radeon HD 7500G, which no longer walks all over Intel’s integrated efforts as it used to. In fact we found it to win marginally in only a few cases over the HD 4000 you’ll find in Intel’s third-gen chips, meaning it’s just as ill-suited to ‘proper’ 3D gaming.

Our test model comes with Windows 7, and most of the models you’ll find for sale at the moment are likely to offer the same OS. To be honest that’s not necessarily a bad thing, as Windows 8 loses a lot of its appeal without a touch screen. 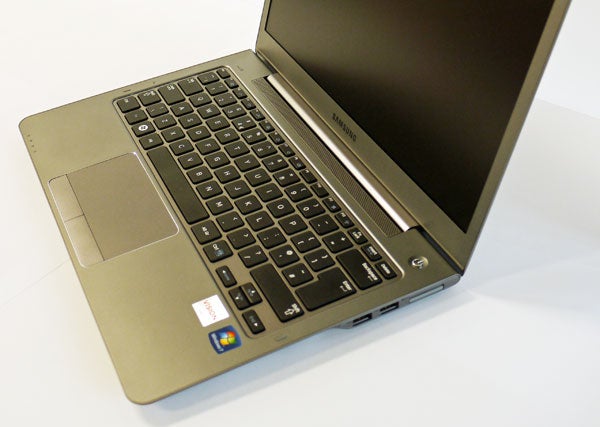 Unfortunately, the Series 5 535U3C doesn’t match the Envy 6-1006ea’s battery life, but then it’s smaller, thinner and lighter so there’s less room for a battery. This Samsung Series 5 ‘only’ lasted five hours and 20 minutes. While that’s not terrible by any means, it does leave price as the Series 5 535U3C-A01’s only advantage over similar Intel models.

You can find the Samsung Series 5 535U3C-A01 for around £470 online. Frankly, Samsung is its own worst enemy here, as you can get a similar 13-inch Series 5 with an Intel Core i5 processor, same RAM and hybrid SSD hard drive for only £100 more. Still, if you really can’t afford the extra this is a decent buy if you’re after this kind of device.

On the other hand, if you’re after a basic laptop with a 12-14-inch screen, it’s also worth considering an affordable Windows 8 device with touch, like the Asus VivoBook. Sure it might not be as slim and the screen isn’t as good, but it offers better performance and Win 8 goodness.

The 13-inch Samsung Series 5 535U3C-A01 is a great little Ultrabook competitor that manages to keep its price low thanks to AMD innards. It’s slim, sleek, light and very well-built. It offers a great user experience and its screen is a cut above most budget laptops. However, mediocre performance and average battery life mean you may be better off looking at pricier alternatives, especially those offering Windows 8 and touch.