Occasional hiccups like the Samsung Series 3 aside, the Korean company has seriously impressed us with its recent laptop efforts, like the super-affordable 17in RV720 and MacBook Pro-beating Samsung Series 7 Chronos. However, it has been a little quiet on the Ultrabook front until now. The Samsung Series 5 530U4B is a 14in Ultrabook that’s eminently affordable and offers a few rare touches, most notably a Gigabit Ethernet port and optical drive.

Just to clear up any possible confusion, an Ultrabook is Intel’s idea of the ideal ultraportable. Though Samsung’s superb Series 9 easily matches any Ultrabook on the market, it came around before the standard was introduced (much like the MacBook Air) and therefore isn’t classed as one. 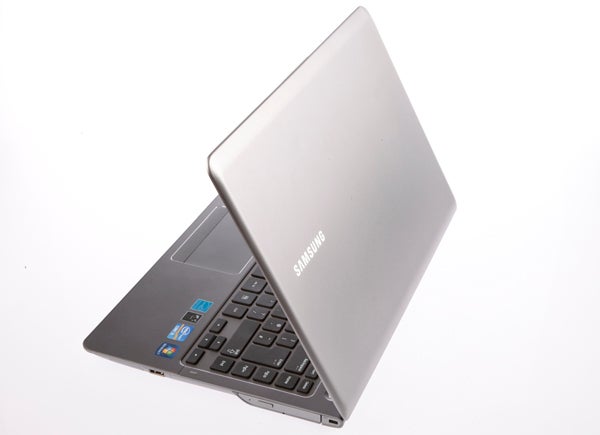 Ultrabooks are loosely defined, but there are a few standard characteristics. They all sport stylish and (so far) metal or part-metal chassis, use Intel Core i3-i7 CPUs, have a minimum of 4GB of RAM, use SSD or hybrid SSD storage, are less than 1in thick and tend to weigh under 1.4kg. 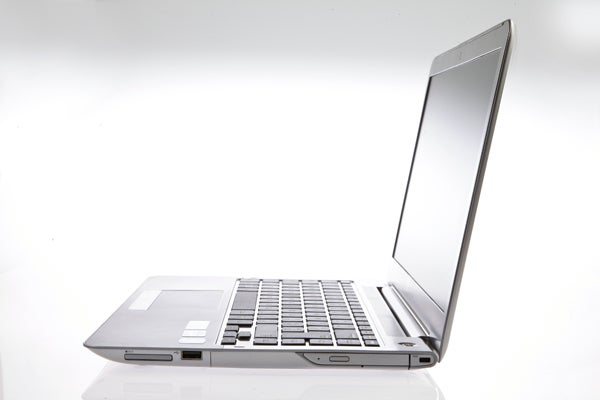 The latter is obviously not a strict guideline, since the Samsung Series 5 530U4B comes in at 1.78kg. However, it gets away with this due to its larger screen plus optical drive and, on some models at least, dedicated Radeon graphics – making Samsung’s Series 5 the first Ultrabook range to support something other than Intel’s mediocre integrated effort (not counting the Sony S2 with its external graphics dock). 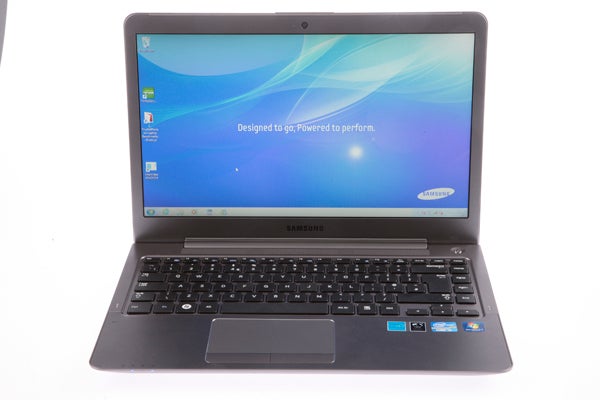 If you’re thinking that the extras might have caused Samsung’s latest ultraportable to become a little podgy, worry not. It’s still under 21mm thick, and its sleek, tapered edges make it appear even slimmer. However, it does share more DNA with the Samsung Series 7 Chronos than Ultrabook rivals like the Lenovo IdeaPad u300s or Toshiba Satellite Z830. This is clear to see in the easily visible and accessible connectivity, which is certainly no bad thing but doesn’t have that MacBook Air je-ne-sais-quoi. 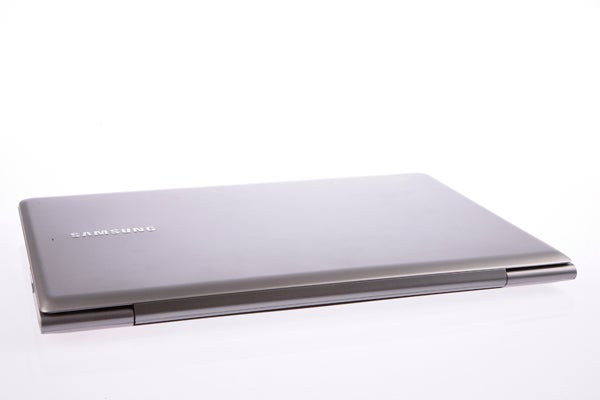 Build quality is solid, if not quite up to Samsung’s own Chronos or indeed Series 9 – but don’t forget that at around £850, this ultraportable is far cheaper. It still manages to feel premium though, thanks to its anodised aluminium lid and palm-rest. Both of these are nice to touch and don’t pick up fingerprints, an immediate advantage over some competitors and predecessors. The keyboard surround is plastic to keep the weight down but looks and feels as nice as the metal bits, so we won’t complain.

The Samsung Series 5 530U’s connectivity is simply superb by Ultrabook standards. Only the Toshiba Satellite Z830 comes close, and still doesn’t offer an optical drive. On the left we have a Gigabit Ethernet port to start with, which is a little too fat to fit and therefore uses the same hinged flap system we saw on the Samsung Series 7 Chronos and Series 9. It’s a nice solution, though under rare circumstances it could prove a potential snagging or even breaking point. 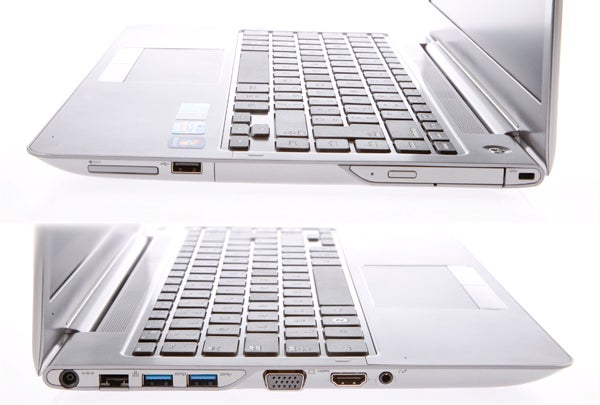 The Ethernet port is followed by twin USB 3.0 ports. These are a little close together for comfort, but there is a third USB port on the laptop’s other side. Next up is good old VGA, which we hoped we had seen the last of on Samsung’s machines with the adapter-using microVGA port on the Chronos. For a consumer laptop, we would argue having it in its original form is at best an eyesore, but we guess it’s there if you need it. Of course HDMI is also available for video output, followed by a microphone/headphone combi jack. 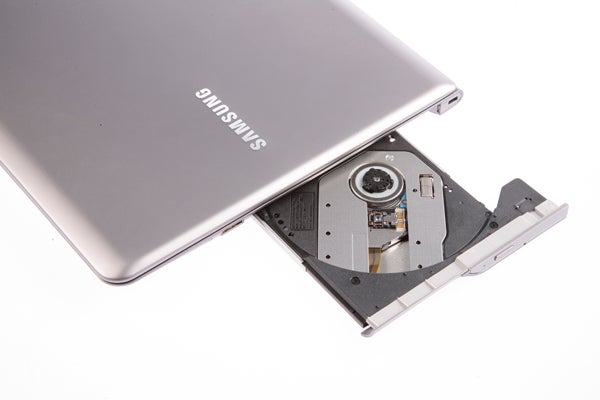 On the right there’s an SDXC memory card reader, single USB 2.0 port, and the attractively recessed optical drive. For video conferencing there’s the 1.3MP HD webcam with noise-cancelling microphone and, last but not least, on wireless duties we have those two good amigos, Wi-Fi N and Bluetooth 3.0.

Samsung keeps the ball nicely rolling when it comes to usability. Though not backlit on account of the Series 5 530U’s affordable price, the well-laid-out chiclet keyboard is still great to use, with the thicker chassis allowing more travel than most and a satisfying click to its key action. Only the Lenovo IdeaPad u300s is nicer to type on, among Ultrabooks. 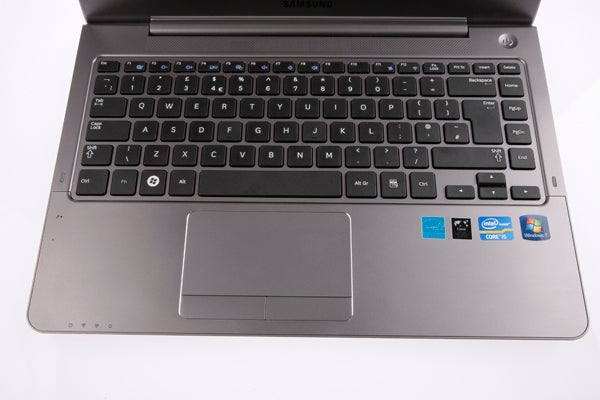 The touchpad breaks from Ultrabook tradition by offering distinct, physical buttons, but doesn’t suffer for it. The touch area is large and smooth, and never feels less than responsive. Its buttons may be semi-glossy but still manage to avoid fingerprints, and their feedback is just as positive as the keyboard’s.

So far the Samsung Series 5 530U has done really well, but screens are a traditional weak point for Ultrabooks, which – despite their premium build, specifications and prices – still use ‘cheap’ TN panels with inherently poor viewing angles. 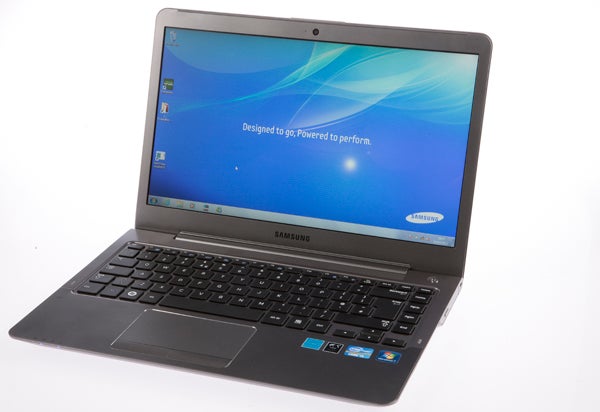 As is becoming ever more popular, the Samsung Series 5 530U4B-A01 squeezes a 14in display into what is essentially a 13in chassis (it measures 33cm across where your average 13in Ultrabook is 32cm). It also sports a matt screen finish, and Samsung has said that all of its laptop screens will be matt going forward. This is a brave decision for which we can only applaud the company, as it cuts down on annoying reflections and glare.

This, combined with a high brightness rating of 300nits, makes the screen usable outdoors in moderate sunshine. Only the resolution is ordinary, with the usual 1,366 x 768 pixels. But then, the Asus Zenbook UX31 is one of the only Ultrabooks to buck this trend with its 1,600 x 900 display. 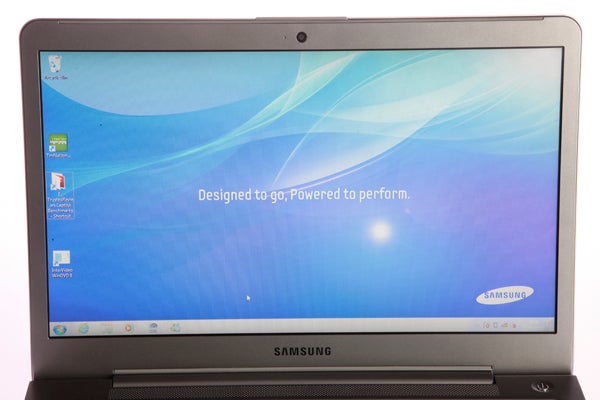 Otherwise the 14in 530U’s screen continues to impress. Dark detailing is excellent, with even the subtlest tonal variations showing up in gloomy movies and games. Colours too are reasonably accurate and vibrant – for a matt display, anyway. Backlighting is even with no noticeable bleed and there are no nasty artefacts.

Last but not least, though vertical viewing angles are as weak as on any other TN panel, horizontal ones are good. We’re yet to see a laptop TN display to match the superb example on the Series 9, but the Series 5 530U is still up there with the best of the rest.

Samsung’s Series 5 530U is, quite simply, the best-sounding Ultrabook we’ve encountered. Its up-facing, 2W stereo speakers produce exceptional volume levels without distortion, and manage a fair amount of depth. There’s even a halfway decent amount of bass thrown into the bargain. They will strain with more dramatic action movie moments and you wouldn’t want to listen to your favourite classical or rock tracks using them, but most of the time headphones won’t be required. Only the Lenovo IdeaPad u300s comes remotely close. 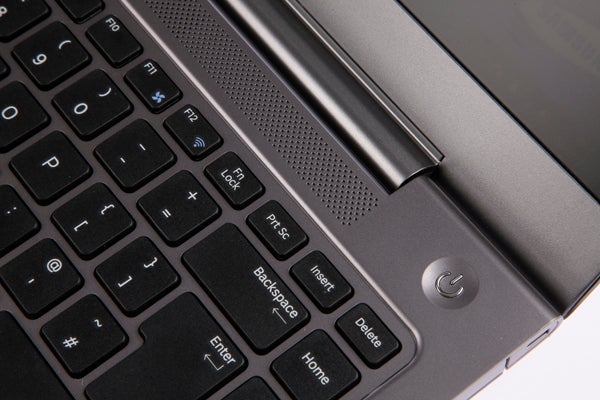 General performance is good, though its hybrid hard drive means it’s not quite as quick as Ultrabooks that use pure SSDs. Regardless of which Series 5 Ultrabook model you choose, you’ll find the usual Intel dual-core ‘Sandy Bridge’ Core i5-2467M, which runs at 1.6GHz but can Turbo clock up to 2.3GHz and supports up to four virtual cores. It’s backed by the standard 4GB of RAM.

Storage varies by model. The 13in 530U comes with a choice of 128-256GB SSDs or a 500GB hybrid drive, while the 14in gives you 500GB on our 530U4B-A01 model or 1TB on the higher-end one with dedicated graphics. Both hybrid systems incorporate a 16GB SSD utilising ExpressCache, which makes for a nice upgrade from the 8GB system we saw in Samsung’s Series 7 Chronos.

Everyday performance is roughly similar though, with a cold boot of just 20 seconds and resume of around four seconds. Your most frequently used files and applications will also be cached on the SSD to speed them up, while the traditional drive means you still have plenty of storage space.

Unfortunately, our 530U4B-A01 didn’t come with AMD’s dedicated Radeon HD7550M graphics. Rather, it uses the same underperforming Intel HD 3000 integrated chip as every other Ultrabook. This results in very mediocre gaming performance, as demonstrated by an unplayable 8.5fps (frames per second) average in Stalker: Call of Prypiat at medium settings. With older 3D titles at moderate settings it manages well enough though, so the casual crowd should be fine.

As with most Ultrabooks, the Series 5 stays cool and quiet even under load, with its optical drive being the only inevitable noise offender.

Battery life is our only real disappointment with Samsung’s latest ultraportable, as we were hoping the slightly roomier chassis might have allowed for a larger battery. We guess the optical drive must have put paid to that though. The 530U4B managed just over five and a half hours in our light battery test, with wireless radios disabled and screen brightness set to 40 percent. 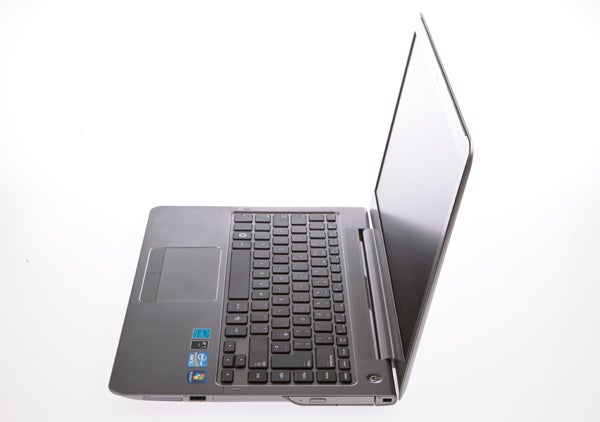 Though not by a large margin, this is still one of the lowest scores we’ve seen from an Ultrabook, especially when compared to the seven hours plus of the Lenovo IdeaPad u300s and Toshiba Satellite Z830. Mind you, the hard drive and larger screen size are factors here, and the Series 5 does beat similarly endowed rivals like the XPS 14z. 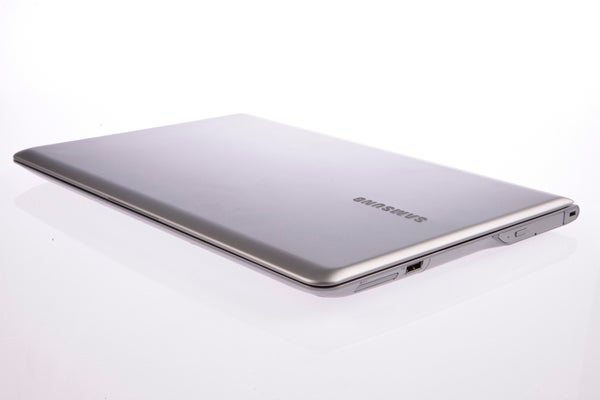 Battery life issues are also mitigated by the 530U4B-A01’s low price of around £850. Though the lighter and thinner Acer Aspire S3 can now be had for as little as £670, you get less connectivity and no USB 3.0; a worse, smaller screen; slower, smaller hard drive; worse typing experience and of course no optical drive – though that may actually be a positive for many users. Still, the 530U4B is an attractive ultraportable at an attractive price.

The Samsung Series 5 530U (4B-A01) Ultrabook is more of a super thin and light 14in ultraportable and Macbook Pro rival, than a competitor to the 13in Ultrabooks already on the market – but either way it’s a sleek, attractive yet affordable laptop. A decent screen and the best audio we’ve yet heard from an Ultrabook combine with good usability and connectivity to make up for its average battery life. We’re especially excited that Samsung is introducing dedicated Radeon graphics into the Ultrabook market with its 530U4B range, though this specific model sticks with Intel’s integrated solution. For those who want an optical drive, it is also the only (current) choice.