Remember the Samsung RV720? That 17.3in laptop won itself a 9/10 and our Recommended award by being a decent no-frills machine for an absolutely bargain price. Well, today’s Series 3 NP300E5A could easily be its twin separated at birth. Though the Series 3 is a 15.6in affair, its design is almost identical, from the exact same rugged lid finish and matt screen, to the modest connectivity and decent specifications – but, more importantly, it retains the budget pricing (under £400) of its larger sibling. But can it match it in being one of the best budget laptops on the market? 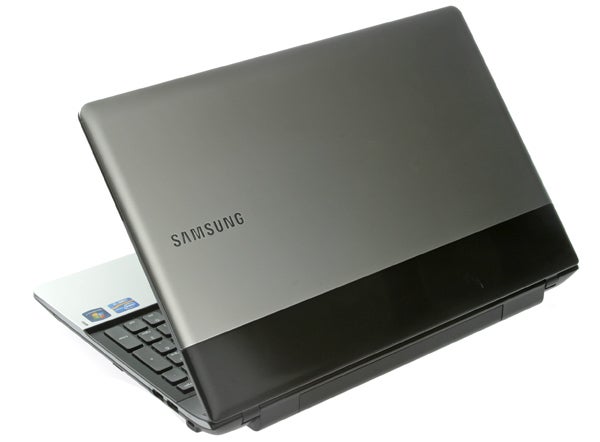 Starting off with looks, the NP300E5A certainly doesn’t give the impression of being a particularly cheap machine. The lid is divided into black and silver sections, and a ribbed pattern makes the silver half look more like metal than most imitations we’ve come across. And the benefits to the pattern aren’t just aesthetic either, as they also provide a more hard-wearing surface that’s easier to grip and doesn’t display grease marks like its shiny, glossy rivals.

Opening the laptop up, we’re greeted with a matt black screen bezel and strip above the keyboard, piano black keyboard surround which complements the matt keys nicely, and a silver palm-rest and touchpad section. It does look a tad cheap once open, but practical souls will prefer the simpler matt look to shinier alternatives that require regular wiping with a soft cloth to maintain their appeal. 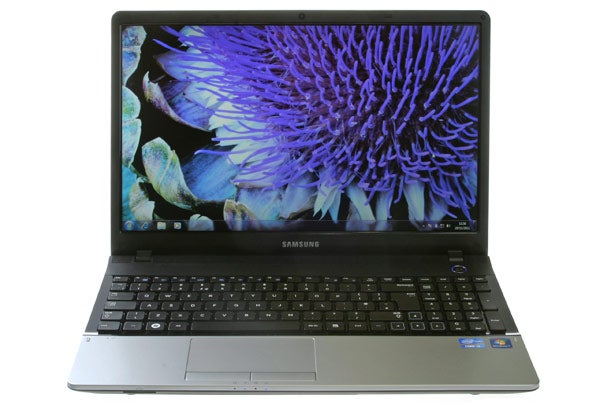 Build quality is decent, though not exactly outstanding and worse than on Samsung’s own RV720. Especially noticeable is that there’s enough flex in the base for panels to separate from each other around the laptop’s sides (where the connectivity resides). Still, it shouldn’t necessarily be cause for concern, just be as gentle as you should be anyway with a piece of delicate technology. The NP300E5A’s weight is a fairly standard 2.3kg.

As you might expect given this Series 3’s sub-£400 price point, connectivity is a little on the basic side. On the left you’ll find a Gigabit Ethernet port, VGA and HDMI for video, a single USB 2.0 port and 3.5mm headphone and microphone jacks. The front houses LED indicators and an SDXC card slot, while to the right there’s the tray-loading DVD-writer and two more USB ports placed (too) close together.

On the wireless side we have our usual stalwarts of Bluetooth and Wi-Fi N. Really the only significant absentee here is USB 3.0, and you won’t find many true budget laptops that support it. We can’t wait until Intel integrates it natively.

We’re really rather pleased with the NP300E5A’s isolation keyboard. It’s identical to that found on the Samsung RV720, meaning it provides an excellent layout (media controls on the cursor keys along with a second Fn key are especially appreciated). There’s also a full number pad, though the cursor keys do intrude on the zero. 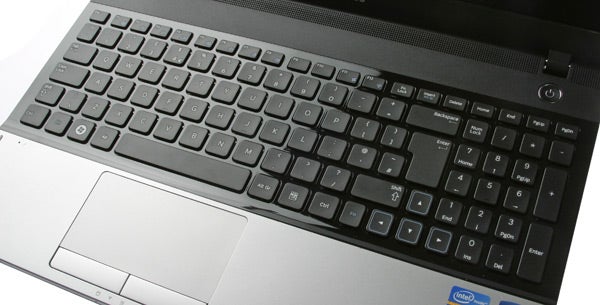 Feedback, meanwhile, is great. There’s plenty of travel to the large, matt keys, and a defined click to let you know you’ve pressed them. It’s no Lenovo ThinkPad X1, but is certainly a superior typing experience compared to many budget rivals. Our only complaint is that it’s not backlit, but that’s a feature you wouldn’t expect at this price.

As for the huge, multi-touch trackpad, it’s smooth and responsive, and its large buttons offer an easy press and good action. We actually prefer them to those on the RV720, as the buttons here are matt rather than slippery glossy. 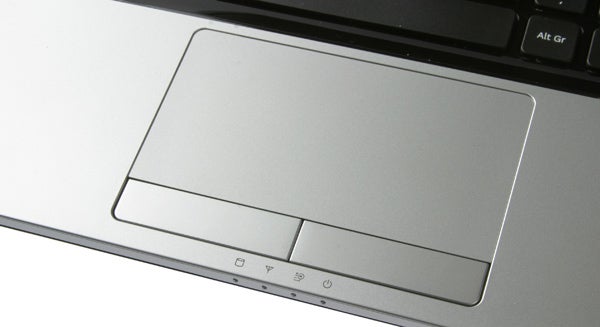 So far so good; the NP300E5A has held up rather well. Unfortunately, we hit a few snags when we get to its 15.6in, 1,366 x 768 screen. First impressions are favourable. For starters, its bezel is matt and quite narrow, while the display itself also sports a semi-matt finish, keeping distracting reflections from ambient light sources to a minimum – unlike the glossy RV720.

However, when we get to image quality everything isn’t quite so rosy. Though viewing angles hold up well on casual inspection, watching a dark image reveals severe contrast shift when straying off-centre – and considering dark detailing isn’t exactly impressive to begin with, that’s not a good thing. On the bright side, colours are fairly punchy, backlight bleed was minimal and there were no nasty artefacts. In other words, if your main focus is productivity and you’re not too picky about entertainment, this display will serve you just fine. Otherwise you should probably consider a different laptop. 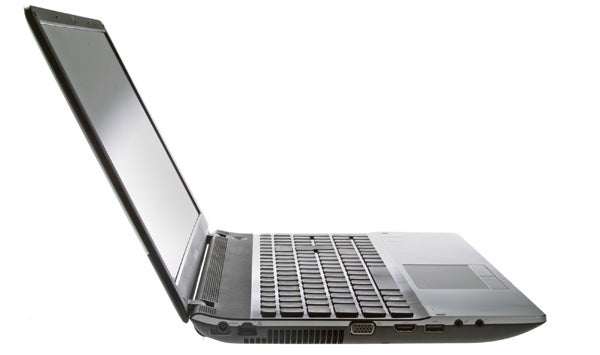 Audio is actually decent enough, with the up-facing stereo speakers on the NP300E5A managing to swim along with budget rivals. If you keep the volume reasonable you’ll get a fairly clear reproduction with a hint of bass thrown in for good measure, though don’t expect anything a pair of headphones won’t easily better.

Unlike manufacturers offering customisable configurations like Dell, Lenovo and (in the US) HP, with Samsung you have to choose a pre-built model. Our specific Series 3 is the NP300E5A, which decides its chassis and screen, while the A01DX affix means our £399.99 configuration has a 2.2GHz dual-core Intel Core i3-2330M CPU at its heart. This processor doesn’t support the hyper-threading or turbo frequency of its more expensive Core i5 and i7 siblings, but should still cope with daily work and (graphically undemanding) play. It’s backed by 4GB of RAM which is plenty for Windows 7 Home Premium to get along with, and a fairly generous yet slow 500GB, 5,200rpm hard drive.

With Intel’s integrated 3000HD graphics taking care of your gaming needs, you’ll need to limit yourself to older or undemanding titles at medium resolutions or detail settings. At 720p and on medium detail, the NP300E5A managed only 43.6fps in TrackMania Nations Forever, while Stalker: Call of Pripyat (which is more indicative of the requirements of modern games) staggered along with an unplayable 16.6fps average. It’s worth noting that even when under load while running gaming benchmarks, the NP300E5A stayed relatively quiet.

Battery life is the last ingredient for Samsung’s affordable Series 3, and matches the company’s quoted five and a half hour figure exactly. Its removable 4,400mAh/48Wh unit managed five hours and 31 minutes with screen brightness at 40 percent and wireless radios turned off, though this will obviously vary depending on usage.

Finally we come to value, and here the 15.6in NP300E5A doesn’t fare nearly as well as Samsung’s 17.3in RV720. This is simply because there is no shortage of 15in laptops offering similar specifications to the Series 3 around the £400 mark, and the NP300E5A suffers from a few more flaws than its larger brother. 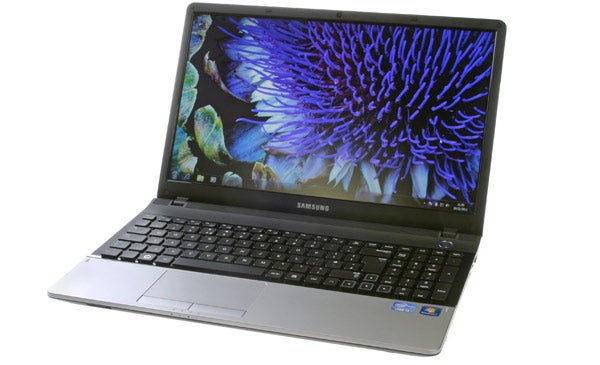 One alternative we reviewed recently is the £430 Acer Aspire 5750, which, despite sharing a similarly mediocre screen, at least offers USB 3.0. On the down-side though, it doesn’t last as long away from a socket.

In terms of productivity, Samsung’s Series 3 NP300E5A is a great budget laptop, thanks to its low price, excellent usability, reasonable specifications and rugged lid. Unfortunately its potential as an entertainment laptop is hindered by its sub-par 15.6in screen, and with plenty of competition, the NP300E5A simply doesn’t stand out enough.