a) are small, beige boxes that spew printed pages.

b) have lots of buttons at the front and insipid LCD displays with no proper tails on g, j, p, q or y.

c) can be made into all-in-ones by gluing scanners on top, sideways.


While all three of the preceding statements may be true of most laser all-in-ones, none are true of Samsung’s SCX-4500. It’s black with a blue LED display and has its scanner stuck on the right way round.


The jet-black body of the machine is composed of matt and high-gloss panels, so Samsung includes a polishing cloth to keep them that way. The top of the case is completely sheer, with nothing protruding from it. Halfway down the machine there’s a gap to let the printed pages out and at the bottom the spring-loaded paper tray pops out, when you press the only physical button on the SCX-4500.


The tray only takes 100 sheets, so you could be attending to its needs pretty regularly if it’s used in even a small office. You’ll also need to fit the clear plastic paper rest to the front of the machine, to catch the pages coming out. This is a shame, as it detracts from the all-black blockiness of the machine, but without it, all your pages end up on the floor. 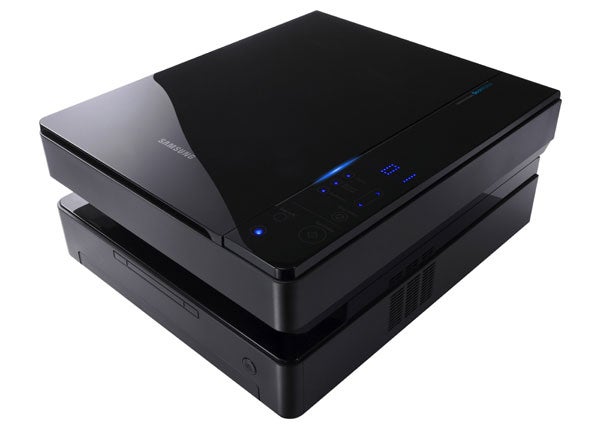 All the controls are touch buttons and an array of 14 x 5 pinhead, blue LEDs provides most of the information, such as the number of copies selected and when you have the case open. There’s also a series of slightly incongruous, small, red icons, which show up when you do things like run out of paper or toner. As a final touch, the scanner light shines through a blue strip up the side of the flatbed lid, giving a sort of Knight Rider style light, moving back and forwards as a scan is made.


Fitting the combined drum and toner cartridge is very simple, once you’ve felt underneath the scanner section and pressed open a catch. The cartridge is surprisingly slim and simply lays into its bay, rather than having to be located and slide into position, as is often the case.


The scanner is sensibly portrait-oriented, so documents are placed on the glass with their long edges running front to back. The lid, which opens backwards, is therefore longer than normal and has a tendency to flop shut when you’re positioning a document. It could do with folding a little further back.

Samsung supplies a good suite of software, including its own ScanThru application for scanning, which includes built-in OCR, colour correction and de-screening.


Samsung claims a print speed of 16ppm for the SCX-4500 and our five page text and text and graphics tests took 29 and 28 seconds, respectively, which gives real-world speeds of 10.3ppm and 10.7ppm. While these aren’t breath-taking, they’re adequate for general home or home office use, which is where this machine is obviously aimed. 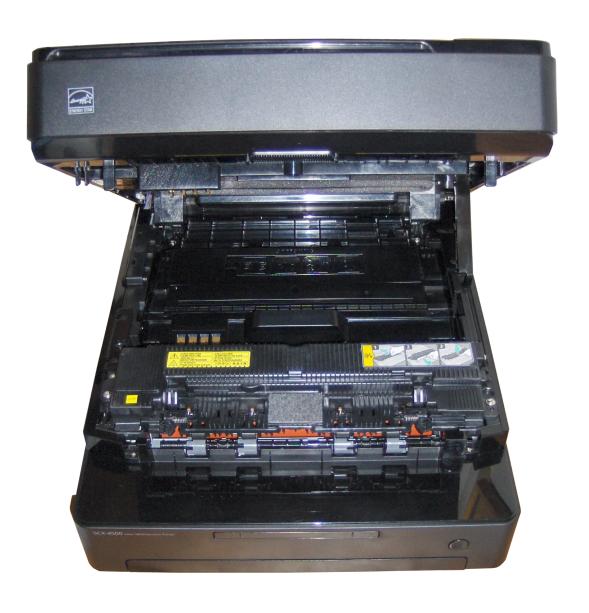 Copy speeds are improved by the clever technique of running both scanner and print engines at the same time. Where most all-in-ones complete a scan first and then start to print, the SCX-4500 starts printing when only about a third of the target document being scanned has been scanned. This gives a single page scan-time of just 11 seconds, ideal if you need to run off a copy in a hurry.


The quality of prints produced by the machine is well above average. Text is crisp and dense with no signs of toner spatter and, even given Samsung’s claim of a 600dpi ‘effective’ resolution, which usually means software enhancement of a lower resolution, there’s no sign of jaggies on curves or diagonals.


Business graphics are also well reproduced, with clean greyscales and very little sign of banding. Photocopies of greyscales are another matter, though, as they come out with noticeable blotchiness and aren’t really suitable for presentation handouts. Finally, photographic prints work surprisingly well, with very slight banding and good grey levels, though darker tones wash out to black too readily. 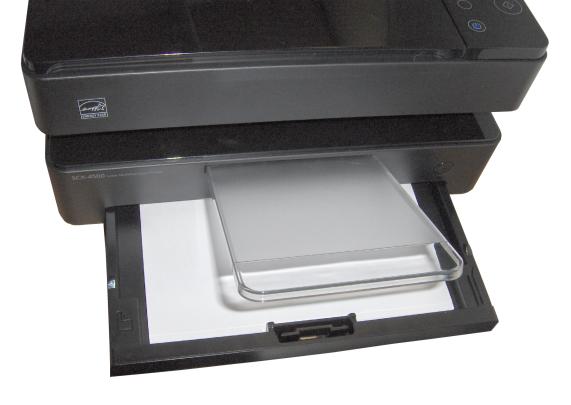 The only consumable in the Samsung machine is a single-piece print cartridge, good for 2,000 pages at 5 per cent cover. A typical Internet price for this unit is around £40, giving a cost per page of 2.84p, including paper. This compares quite well with other mono laser all-in-ones we’ve tested recently and is certainly not a reason for crossing this good-looking machine off your shortlist.


The SCX-4500 is all about style. It’s clean, black lines mean it fits in with a variety of black and silver PCs or even older, white Macs. It prints well, scans reasonably and copies fast, but has a few shortcomings, particularly the 100-sheet paper tray and mean-spirited, 1,000 page starter cartridge. You pay for the looks, but there’s a fair all-in-one under the black, shiny skin.