Without wishing to sound overly dramatic, choosing a budget camera is a risky business. With high-end cameras costing over £250 there are far fewer problems. Some are better than others, but there are few really bad ones. At the other end of the scale however, cameras costing around £100 or less are a very mixed bunch. There are some genuine bargains, but they are heavily outnumbered by very poor quality cameras, usually from no-name brands, and choosing between the two is something of a nightmare unless you really know what you’re looking at. Even when you do know it can be difficult to tell the difference. 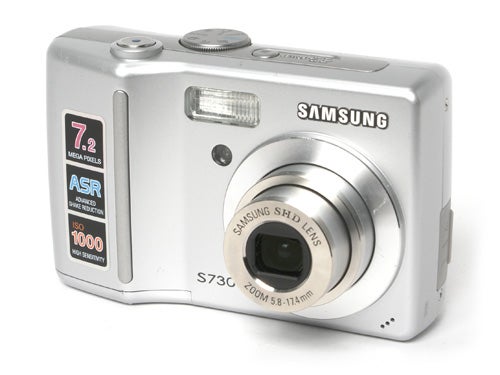 When I opened the box of this Samsung S730, I was initially a bit disappointed. As I mentioned in my review of the Samsung L700

a couple of weeks ago, Samsung’s digital camera range consists of no less than 36 models spread over six different ranges. The S730 is the mid-range model of the 13 camera in the S-series, which rather confusingly includes several models whose designations begin with A or D. It is a low-cost 7.2-megapixel 3x zoom camera powered by two AA batteries, and currently available for around £110. This is a pretty crowded sector of the market, with all of the major manufacturers offering something comparable. In terms of price and specification, its closest matches from the other brands are the Canon PowerShot A550 (£140), Fuji FinePix A800 (£105), HP Photosmart M627 (£160), Kodak EasyShare C653 (£100), Nikon Coolpix L11 (£120), Olympus FE-210 (£95), Panasonic Lumix DMC-LS60 (£95) and the Sony Cyber-shot DSC-S650 (£100) 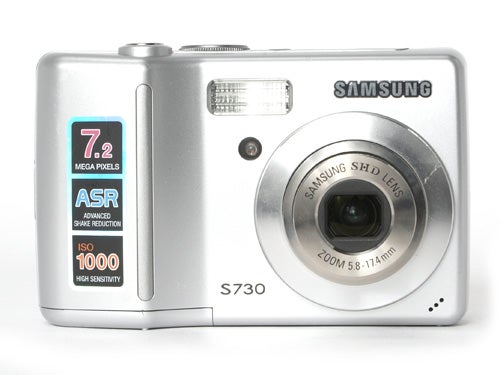 The design bears a slight family resemblance to Samsung’s excellent NV10, even more so for the black version, but while the NV10 has an all-metal body and cutting edge design, the S730 is all plastic and looks relatively unsophisticated. It’s not a small camera, measuring a chunky 99.8 x 62.8 x 25.7mm, and weighing around 185g with two AA alkaline batteries its no lightweight either, although using lithium batteries would reduce the weight by about 25g. The body design is attractive enough, and is nicely shaped to fit comfortably and securely in the hand, but even a gentle squeeze of the handgrip produces creaks and crackles, and the silver plastic finish marks easily. It may look quite pretty when it’s brand new, but it won’t stay that way for long. The fit of the various controls is quite loose and wobbly, and the card/battery hatch opens at the slightest provocation, allowing the batteries to fall out.

However once you switch the camera on, it becomes apparent that while some corners may have been cut on the external frills, on the inside it’s got some good quality components. It starts up in approximately two seconds, which is quicker than average for a camera in this class, and shuts down again just as quickly. The first thing that catches the eye is the excellent 2.5-in 230K pixel LCD monitor, which has a nice fast refresh rate, far sharper and faster than one would normally find on a budget camera, although perhaps not too surprising considering that Samsung is one of the world’s largest manufacturers of LCD displays. 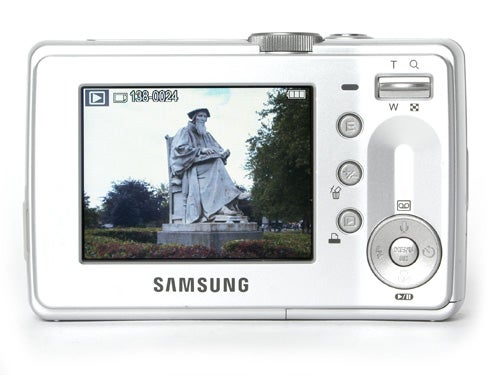 The most obvious control is the main mode selector dial on the top panel. This turns with a nice positive click, but it is also fairly loose and easy to jog accidentally. Modes include the usual full auto “green” mode in which most options are disabled; the ASR (“Advanced Shake Reduction”) mode, which in fact merely boosts the ISO setting to produce a faster shutter speed; a program auto mode which allows access to the custom settings; a scene mode with 11 scene programs; night shooting mode; portrait mode; and rather surprisingly a manual exposure mode. This is fairly limited, offering only minimum or maximum aperture, but shutter speeds of 8-1/1500th of a second are available. There is also a movie mode, with the now obligatory 640 x 480 resolution at 30fps and mono audio. 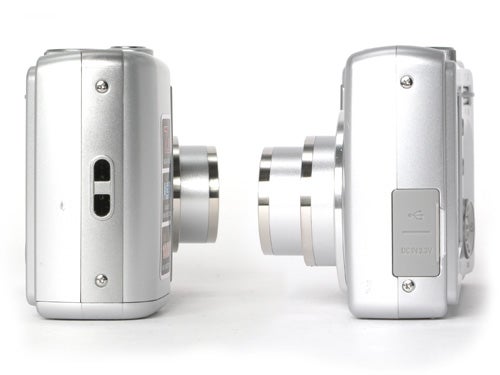 While some compact cameras have a function button for quick access to frequently-used adjustments, the S730 has two. The main one is the +/- button, which brings up an on-screen display from which you can make easy adjustments to picture size and quality, metering mode, drive mode, ISO, white balance and exposure compensation. The second button, labelled ‘E’, gives access to an unexpectedly comprehensive colour adjustment menu, saturation adjustment, and several “fun” features, including shaped highlights for portraits, several different formats for multi-exposure composites, and a frame overlay mode that is every bit as tacky as you might hope. As well as these options, the main menu also holds sharpness and contrast adjustment as well as AF mode selection. For a simple budget camera the S730 does have a surprisingly complete list of options, and although having two option buttons plus the menu is a bit unnecessarily complicated it is fairly easy once you remember which button does which.

In actual operation, the S730 has its ups and downs. In good light and shooting subjects at normal ranges it performs reasonably well, focusing quickly and accurately and snapping away with a minimum of shutter lag and a shot-to-shot time of about three seconds, which is a little slow but not intolerably so. In continuous shooting mode it can manage approximately one frame a second, but annoyingly the monitor remains blank after the first shot, and the is no audio signal to indicate when successive shots are being taken, so it’s a bit hit-or-miss. The main problem is low-light shooting. It suffers from exactly the same problems as the L700, in that despite having a very bright AF assist lamp it refuses to focus at all most of the time, even with fairly high-contrast targets at medium range. This isn’t just in total darkness; the S730 has problems focusing in light you can read by. 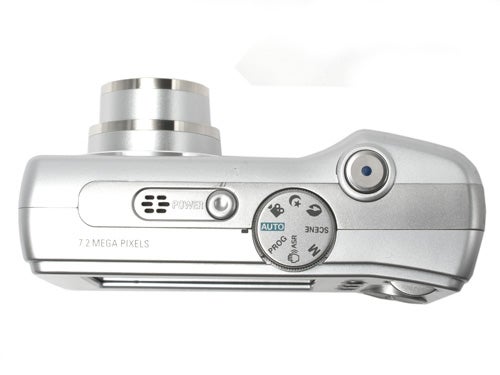 Likewise picture quality has good points and bad. Overall detail and sharpness are very good indeed; in fact I would say that it produced better results than most of the other 7MP compacts I’ve reviewed recently. The lens doesn’t have the Schneider-Kreuznach label that most of Samsung’s high-end cameras bear, but it is very good nonetheless, producing good centre sharpness and minimal edge blurring. There was noticeable wide-angle spherical distortion, but no worse than most other 3x zoom compacts. However exposure control was imprecise, leading to some shots being slightly over-exposed, and the default colour saturation setting seemed a bit pale and washed out, although this can be adjusted. Noise control was very good up to 200 ISO and acceptable at 400 ISO, although the 800 and 1000 ISO settings would produce quite poor quality even as snapshot prints. 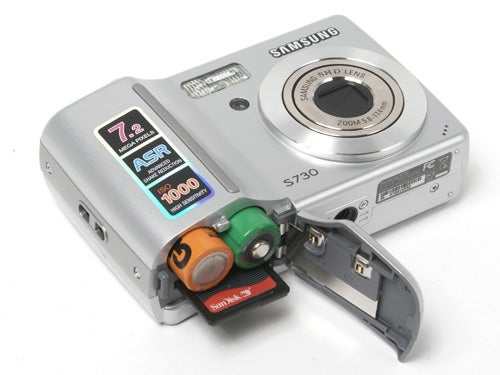 When used in good light and at low ISO settings, the Samsung S730 is a decent snapshot camera with good handling and performance, and a wider range of features than many budget compacts, but its very poor low light focusing means it will be of limited use in many social occasions. Build quality could also be better, but all in all not bad value for money. 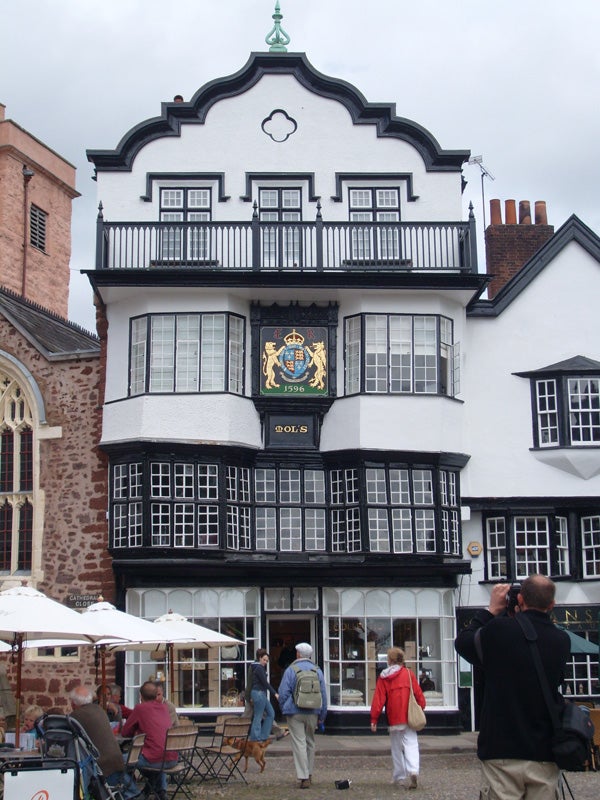 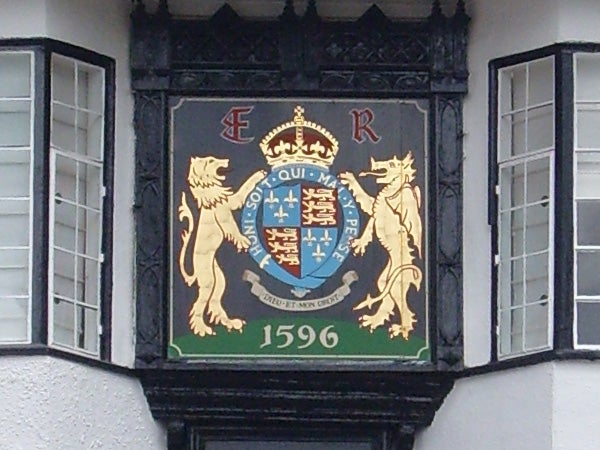 Good image quality at the minimum 80 ISO, although the colours look a bit washed out. 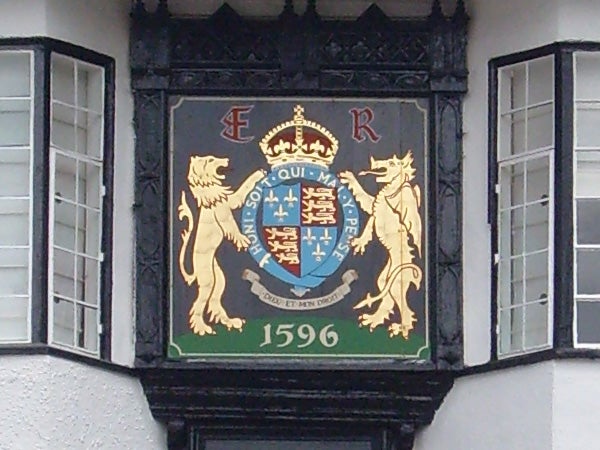 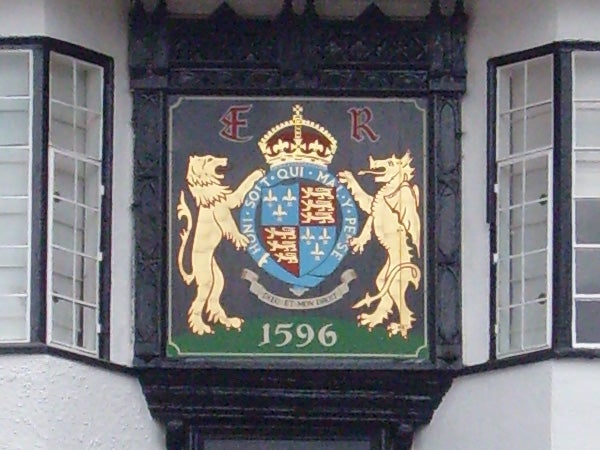 Some colour distortion visible at 200 ISO, but noise levels are low. 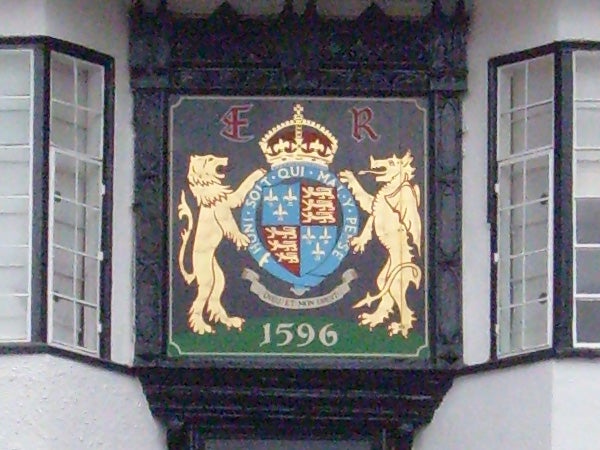 At 400 ISO the noise level is higher, and colour distortion is also worse. 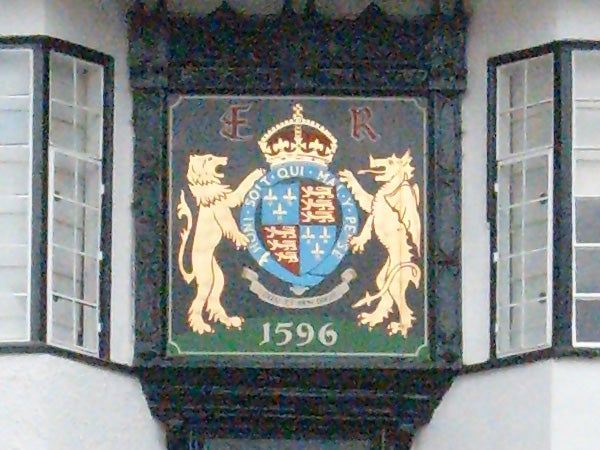 At 800 ISO the noise levels are now much worse, and the colour balance has also been slightly distorted. This would not make a good print at any size. 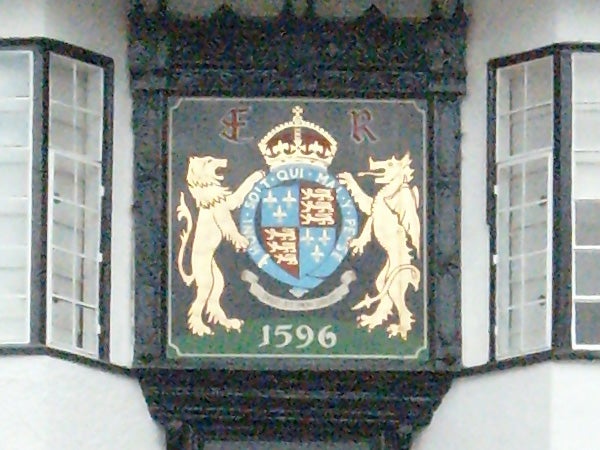 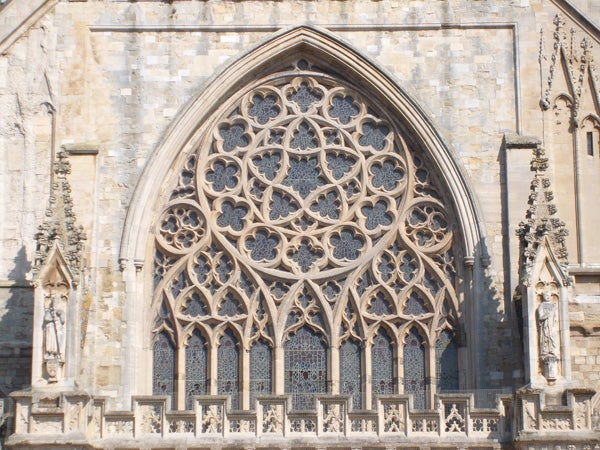 Here’s a standard shot to compare detail levels. Either click on the image to see the full-sized version, or see the crop below. 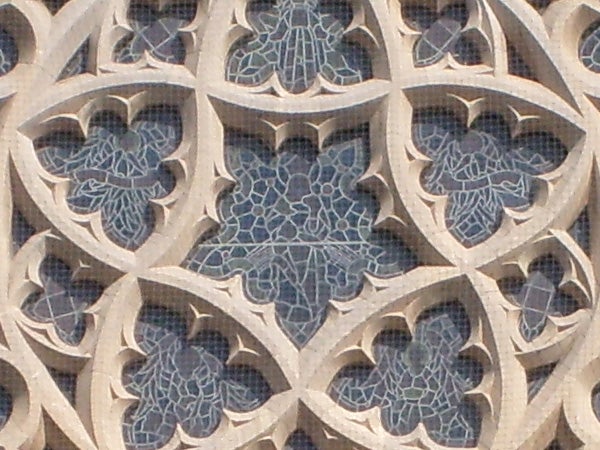 The level of detail is very good for a 7MP camera, and the lens produces a nice sharp picture. 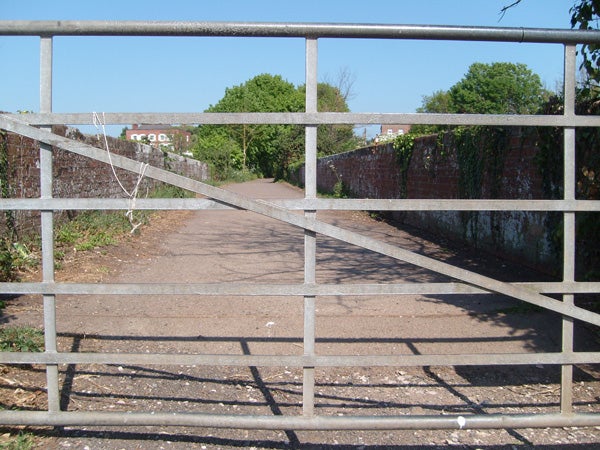 The lens may not have the Schneider-Kreuznach brand name, but its very good nonetheless. At wide angle there isn’t much spherical distortion. 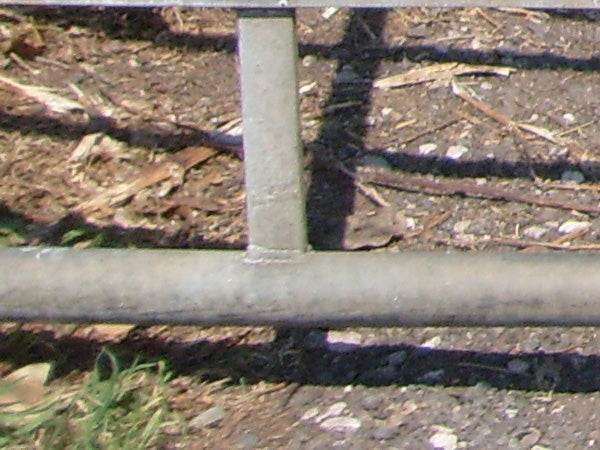 Corner sharpness isn’t bad for a budget camera either. 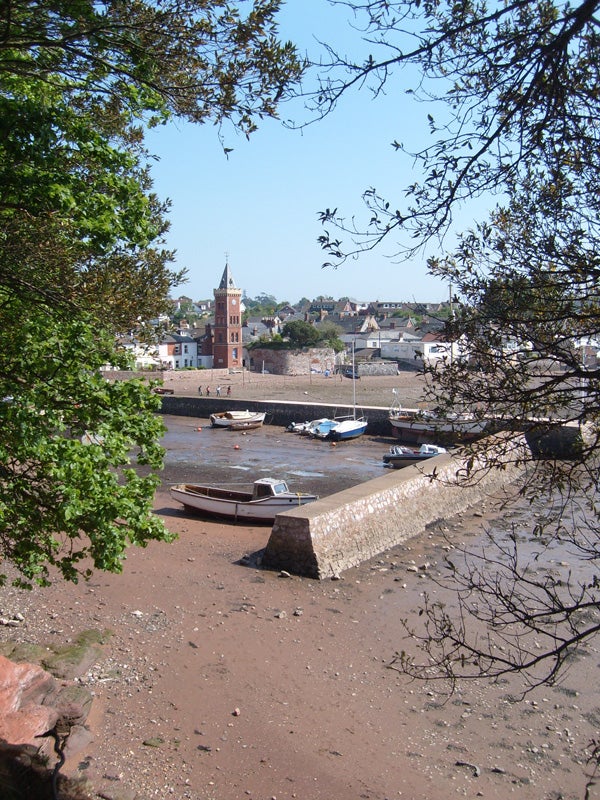 With a wide-angle end equivalent to 35mm the S730 is wider than some 3x zoom compacts. 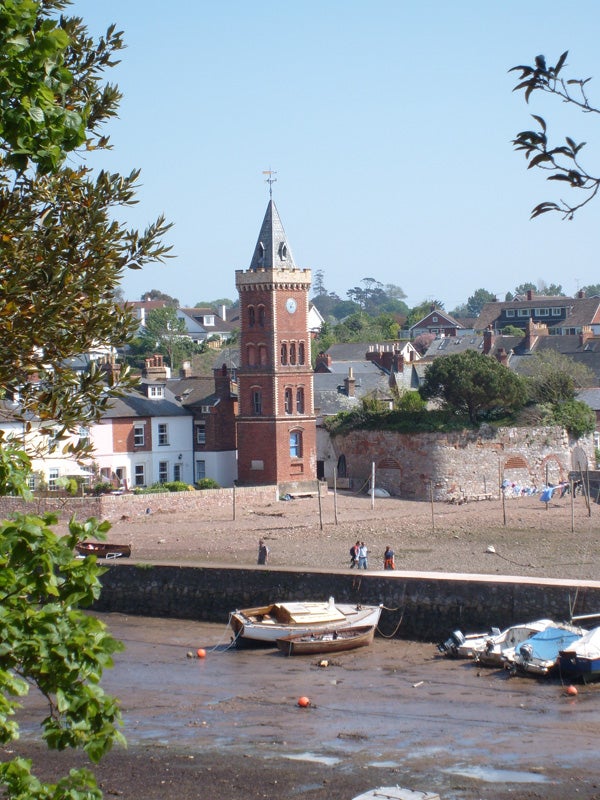 The telephoto end of the zoom is equivalent to 105mm. 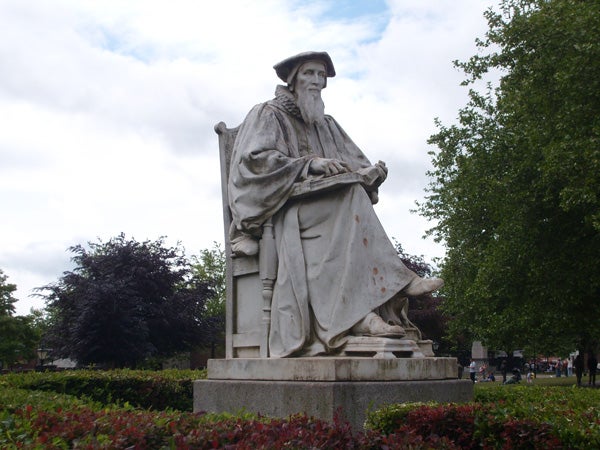 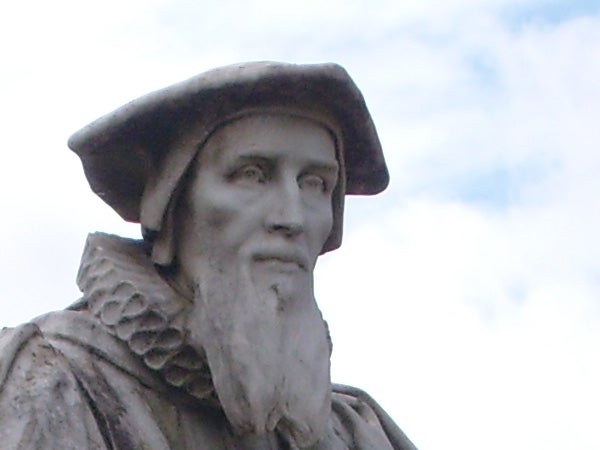 The shadows are a bit noisy, but there’s almost no purple fringing.