From elite gaming machines that cost more than a secondhand car, to equally pricey ultraportables using exotic materials, there are plenty of fancy laptop choices if you have the money. However, most folks just want something that does the job for email, web-browsing and the odd game or movie. While 15in models like the Dell XPS 15 are a good compromise between screen size and portability, if you’re looking for an affordable desktop replacement, Samsung’s 17.3in RV720 might be just the ticket.

Though it’s available for a bargaintastic £406, the RV720 doesn’t look or feel cheap. While there’s no metal used in its construction, Samsung has thankfully steered clear of cheap plastics and glossy finishes (which it failed to do as recently as with the RF711). The lid sports a ridged texture that not only provides a secure grip and prevents unsightly fingerprints, but is also far more scratch-resistant than most alternatives. Ergonomically we’re really loving this finish, and visually it’s also very attractive, with a two-tone black and silver look that sets it apart from the uni-lid crowd.

Opening the laptop up, we’re greeted by a mostly matt interior, aside from the screen and keyboard surround – neither of which are areas you’re likely to be touching often. The only finger smudge hazard are the chromed buttons on the touchpad, which don’t fit in all that well aesthetically either. Matt black might have been a better choice. Still, it’s encouraging when this is our only criticism. 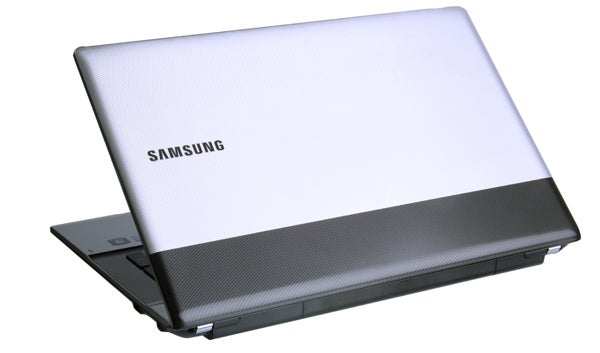 While it’s not even close to something like the Lenovo ThinkPad X1, build quality is likewise on a level far above what you might expect for the price. Plastics used are solid throughout, and though the lid is somewhat flexible, it’s not unduly so. We’re especially impressed by both the solid hinge action and the total absence of flex in the keyboard area, two points on which even expensive laptops can fall down. The one disadvantage to its sturdy construction is that this model weighs in at a not inconsiderable 2.6kg, but that’s still relatively light for a 17in machine.

Connectivity shows the first signs of this being a ‘budget’ machine, with USB 3.0 not making the cut. However, it’s important to remember that many consumers may never use the extra bandwidth this offers over its predecessor, and what’s on offer will be plenty for the target market. On the left we have Gigabit Ethernet, twin USB 2.0 ports, VGA and HDMI for video, headphone and microphone jacks, and an SDXC card reader. On the right you’ll find the DVD rewriter and a third USB 2 port. In a yet another nice surprise, Bluetooth 3 joins Wi-Fi N in handling the wireless side of things.

And the good news just goes on when it comes to this laptop’s usability. There’s plenty of room for a full-size keyboard, and Samsung has opted for a chiclet affair with number pad. Layout is superb, though the cursor keys do intrude on the numpad somewhat. There are no dedicated controls, but brightness and volume functions are found on the cursor keys with Samsung’s signature secondary Function key allowing for easy one-handed operation.

Feedback on the matt, well-spaced keys is very good indeed, with decent travel and a positive click. Combined with the generous area to rest your wrists on, it makes for a fantastic typing experience that again exceeds the expectations we would normally have, given the RV720’s affordability.

The large, multi-touch touchpad, meanwhile, doesn’t interfere with typing, is subtly delineated, and offers a smooth, sensitive surface with just enough friction to prevent it being slippery. Its buttons might love fingerprints but at least provide a positive click. While it pales compared to Samsung’s buttonless frosted glass efforts as found on the premium Series 9 and 7, within its price bracket it’s more than acceptable. 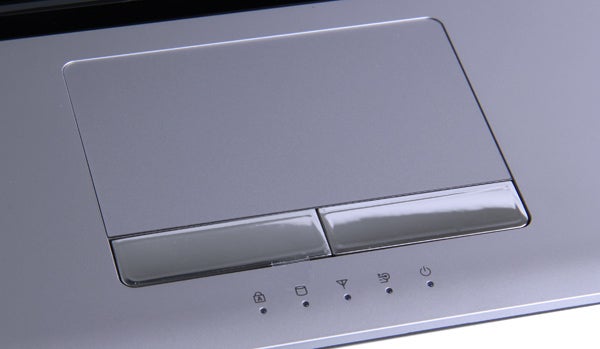 When it comes to its 17.3in screen, there’s nothing too exciting. It sports the typical 1600 x 900 resolution common at this price point. Backlighting is even with no noticeable bleed, and contrast is impressive with vivid colours aided by its glossy finish. Viewing angles, however, are average (almost mediocre), and reflections will be a problem if you’re near ambient light. We really wish Samsung would extend its ‘no-gloss’ policy – which it’s applying across the Series 7 range – to all of its laptops, but then glossy screens are common on the RV720’s rivals.

Audio is our first out and out disappointment.
It’s not bad per se, but it’s lacking in volume, depth and bass. Basically, it
gets solidly trounced by the Toshiba NB550D, which is a 10in netbook… Frankly, we were hoping for better
given the amount of room Samsung has to play with here.

Like its connectivity, the specifications on the RV720 are average, meaning they’ll more than suffice for the average user and the laptop’s intended market, but power users may wish to look elsewhere. Helming the crew of innards is one of Intel’s capable ‘Sandy Bridge’ dual-core Core i3 processors, specifically the i3-2310M, which runs at 2.1GHz by default. Neither turbo-clocking nor virtual cores are available, so what you see is what you get, and you can’t upgrade to a Core i5 or i7 model either.

The CPU is backed by 4GB of RAM, and a surprisingly generous 750GB hard drive – great for storing lots of content, and far more than we would expect for the money. As Samsung manufactures its own hard drives, it can afford to put in a large capacity like this without increasing costs too much.

Graphics are the weakest link, as they’re of the Intel integrated HD3000 variety. Consequently, only casual gamers need apply, as evidenced by a 41fps average in TrackMania – which is a very undemanding game to begin with – at Medium detail and 720p, or an unplayable 16.4fps average in Stalker at the same settings (to give a more realistic indication). However, everyday tasks like general productivity and watching HD video won’t bother this chip in the slightest, and it’s even up to a bit of video encoding.

With the RV720’s size you won’t necessarily want to take it out and about too frequently, but if you did, its 4400mAh/48Wh removable battery powered it for four hours and 30 minutes in our light battery test (with screen brightness at 40 percent and wireless radios turned off), which is still good for a desktop replacement.

Even taking its relatively minor negatives (poor audio and graphics, and average screen) into account, value is where the RV720 really shines. The choice of current-gen Core i3, brand new 17in laptops available for around £400 can probably be counted on the fingers of one hand (note that we’re not referring to older Pentium or Athlon-based machines, nor even the first-generation Core i3 models). Throw in the attractive, durable design and the whopping 750GB hard drive, and this Samsung really represents a bargain. 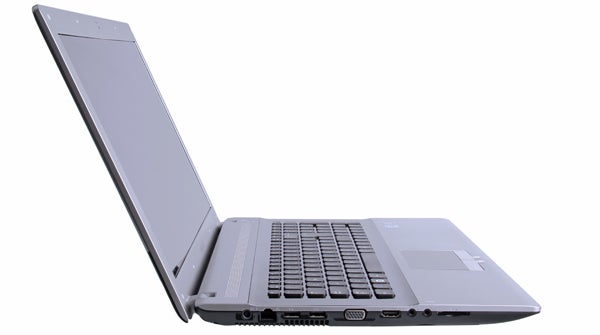 If you’re willing to spend £100 more there are plenty of alternatives with slightly better specs, but even then this configuration of the RV720 is still an attractive buy thanks to its build and usability. This considered, it’s one of the best value desktop replacement laptops we’ve looked at in a long time, currently unmatched by anything that even value brands like Acer and Dell have to offer.

Though its connectivity and specifications are nothing to get excited about, its solid build, decent battery life, excellent design and great usability – along with a totally bargain price – ensure that this Samsung is one of the best 17.3in laptops going if you’re on a budget. In fact, it has very few rivals for around £400, meaning it comes thoroughly recommended.