Though we’re often keen to extol the virtues of prohibitively expensive ultra-portable notebooks, what many people actually want is a large, affordable but attractive alternative to a fully fledged Desktop PC. It’s this desire after all, not the sleek lines of a Sony TZ, which has driven the growth of the notebook market and decline of the desktop market and the Samsung R700 (model no. NP-R700-A003UK) is a perfect example of this. 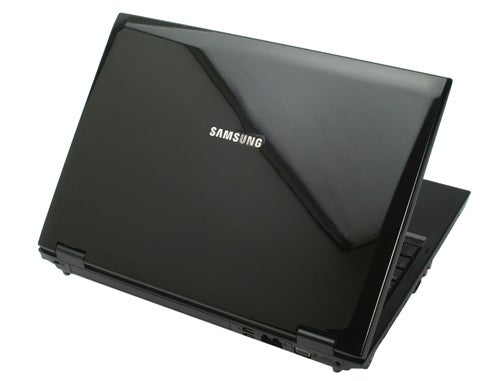 Retailing for around the £560 mark, it doesn’t claim to do anything particularly special. It can’t harp on about a high resolution screen or bleeding edge security and it doesn’t feature a Blu-ray drive, but it does have HDMI output and as a whole it’s a well put together and very well balanced machine at a price that’s almost too good to resist.


From a design aspect, for a 17in notebook it’s surprisingly slim and light. It weighs a manageable 3.18kg and has a wedge shaped design, measuring 39.8mm at its thickest and 29.7mm at its thinnest point and though this variation may seem something of a cheat, it does make the R700 look and feel quite slim for its size. This is aided, of course, by the ubiquitous all-black finish found on all of Samsung’s notebook offerings, with an attractive glossy lid and matte black internals. This styling certainly lends the R700 a sleek and stylish appearance and unlike some machines, it’s a look that’s almost universally appealing. 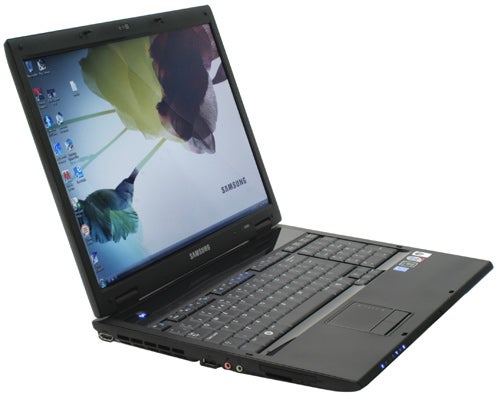 Another thing that’s glossy is the screen, which is 17in wide diagonally with a typically standard 1,440 x 900 resolution. Naturally this makes it somewhat reflective, but also serves to enhance black levels and colour vibrancy, though only to a moderate degree. Nonetheless, for the price the display on the R700 is really very good. It’s bright and sharp and though the blacks never exceed mediocre levels, there’s very little to complain about.


Likewise, for the price, you get a handsome and well considered specification. At the heart of it all is an Intel Core 2 Duo T5450, which runs at 1.66GHz with an 667MHz Front Side Bus and 2Mb L2 Cache. It’s one of the more entry level CPUs in the Intel line-up, but still boasts important Santa Rosa features that improve power management and therefore battery life. This is supported by 2GB worth of 667MHz RAM and a generous 250GB 5400rpm SATA HDD, providing enough space for most requirements. 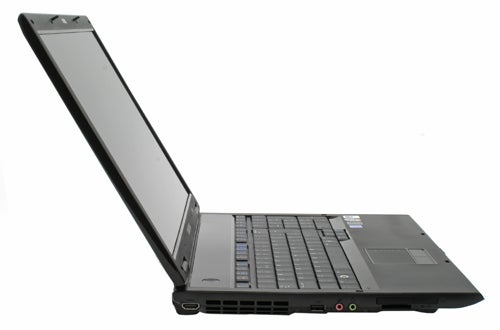 For graphics you get a 128MB nVidia 8400M GS, which is no powerhouse but does the job and will allow you to play fairly basic games such as World of Warcraft or The Sims without too much trouble. Moreover, as already mentioned, you go get an HDMI output, an increasingly important feature for any notebook, especially if it has any pretensions to being a desktop replacement.

You also get Gigabit Ethernet, though unsurprisingly you don’t get Draft N wireless, just regular Intel Pro Wireless 802.11 b/g. This should be fine for most people’s needs, but it rules out streaming high definition video content wirelessly. Meanwhile, a 7-in-1 memory card reader supporting, MMC, High Speed MMC, SD, SDHC, Memory Stick, Memory Stick Pro and xD card formats means you should have no problems fetching images or video from any digital camera or camcorder – an underestimated but important feature for any desktop replacement. 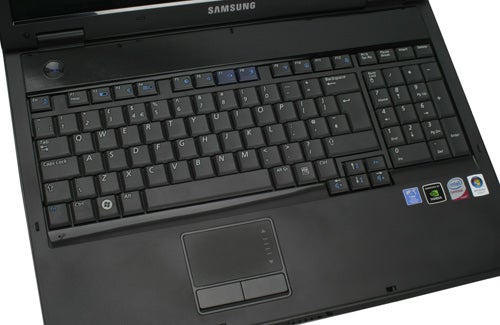 Connectivity is pretty strong, too. Along with the HDMI output you get a D-SUB output as an analogue video output, good for PC monitors and TVs as well if you have no spare HDMI ports. Four USB ports matches what you’d demand on a notebook this size, while you also get all the staples such as headphone and microphone jacks, Ethernet and modem ports, a 54mm Express Card slot and a 1.3 Megapixel camera.


There are some notable absentees, however. There’s no Bluetooth on-board or FireWire either, which means you’d have a tough time pulling content from a DV or HDV digital camcorder. On the plus side, the 8x DVD+/-RW drive has LightScribe support, which allows you to burn your own labels onto the disc. It’s a small thing, but a nice addition to any consumer focussed machine.

As is the software provided, which includes Samsung’s own ‘Easy’ branded battery, network and display management software, Cyberlink Power DVD, Microsoft Works 8.0 and a 60 day trial of Office 2007. All of this, including Samsung’s own software, works well and with McAfee Virus Scan thrown in as well, the R700 comes equipped with everything you really need to plug in and start using straightaway.


And, when you do begin to use the R700, you’ll come to appreciate one of the greatest aspects of the R700: its keyboard. Now, before I go on to explain why it’s so good, it’s worth remembering that Samsung is still committing one of the cardinal sins of keyboard design by placing the Fn key to the left of the Ctrl key, but despite this the R700’s keyboard is truly excellent.

For starters, aberration excepted, the layout is really good. Despite the inclusion of a numeric key pad it’s not at all cramped, proving roomy and without any obvious compromise. Cursor keys are nicely withdrawn out of way and each section of the keyboards is slightly separated. Vitally, though, the keys themselves feel firm, crisp and responsive, aiding fast and accurate typing. Likewise, a well proportioned touchpad combines to create a great user experience.

This isn’t to say, though, that there aren’t some disappointments. One notable area of weakness is the speakers. Not only are they not very powerful and somewhat tinny, they’re also housed underneath the notebook so they output into the desk, or whatever surfaces the machine happens to be sitting on at the time. It seems as though these were something of an afterthought for Samsung, not to mention a useful cost reducing feature. It would also be nice to see features such as media controls and a hardware switch for wireless radios, often staples even in budget offerings.

Still, these are relatively small complaints and though overall performance is fairly pedestrian by modern standards, it’s solid enough and only really struggles at highly intensive tasks, such as the batch image editing of our in-house Photoshop Elements test and video encoding in Virtual Dub, which the target market won’t be performing. 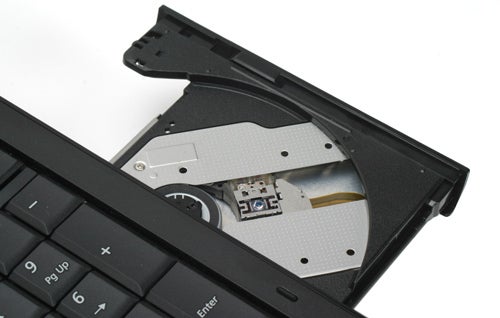 Moreover, though raw performance is fairly unspectacular, battery performance is surprisingly decent given the size of the screen – typically the most draining aspect of any notebook. In the Productivity Suite it managed a creditable two hours and 56 minutes, while in the lower intensity Reader test it easily passed three hours by 18 minutes. Both results compared favourably to our comparison machines, the Dell XPS M1530 and HP Pavilion dv2699, both whom used smaller and likely less power hungry screens.


Better still was the DVD Playback result, which ended three minutes past two hours at maximum brightness setting. This was actually higher than both the comparison machines and should be good enough for watching a medium length film on battery, while reducing the brightness to an acceptable level would give you further head room. In any case, even if you’re just moving around the house, the R700 is frugal enough to be used for a decent amount of time before plugging back in. 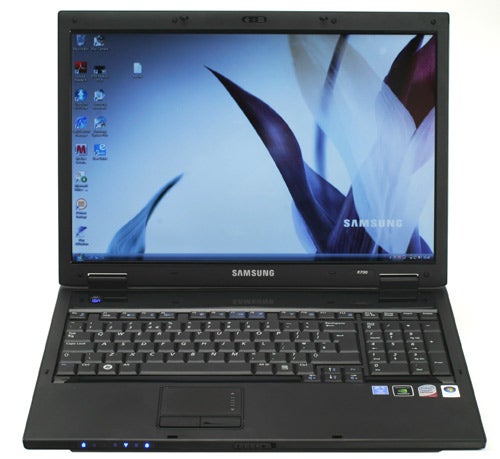 
Though the R700 is by no means feature rich or high performance, it has all the right features and good enough performance to make it a very attractive proposition at this price. A capacious 250GB hard drive and 2GB of RAM means it ticks along nicely, while HDMI output isn’t a luxury you won’t find on too many “budget” notebooks. Its decent battery performance is just the icing on the cake and an excellent keyboard and deceptively slim design add further to its value and appeal. 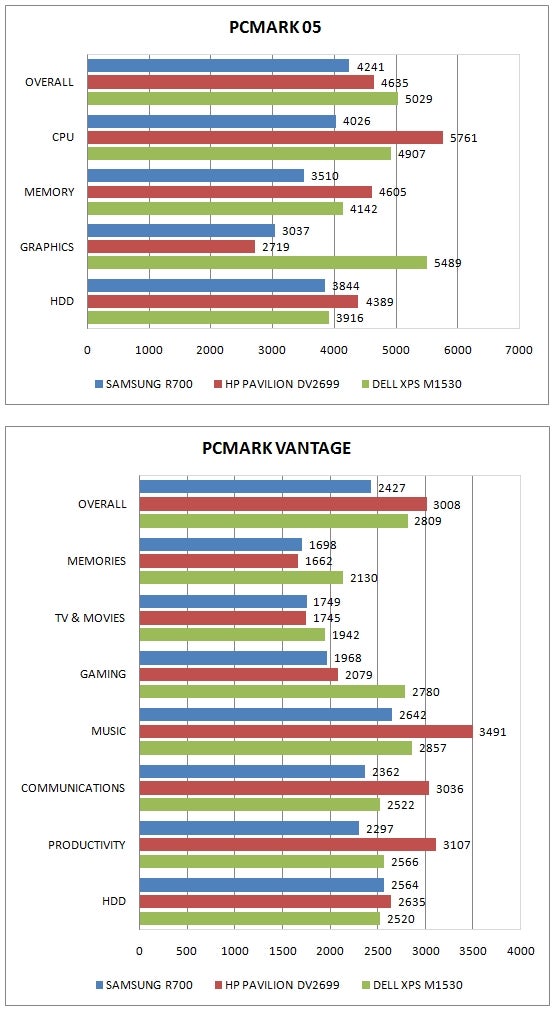 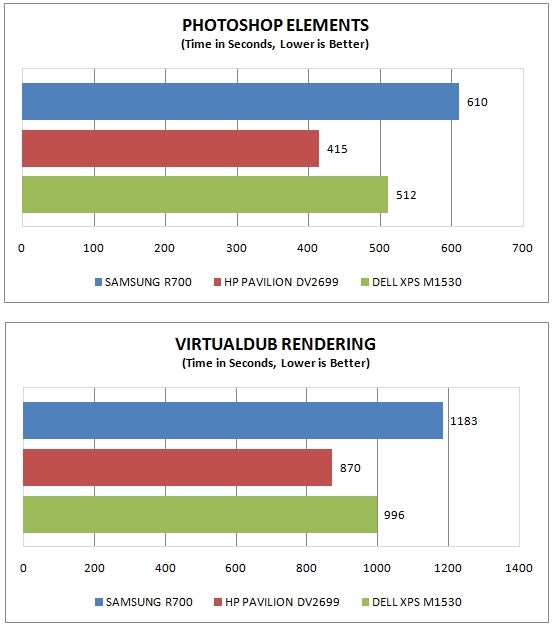 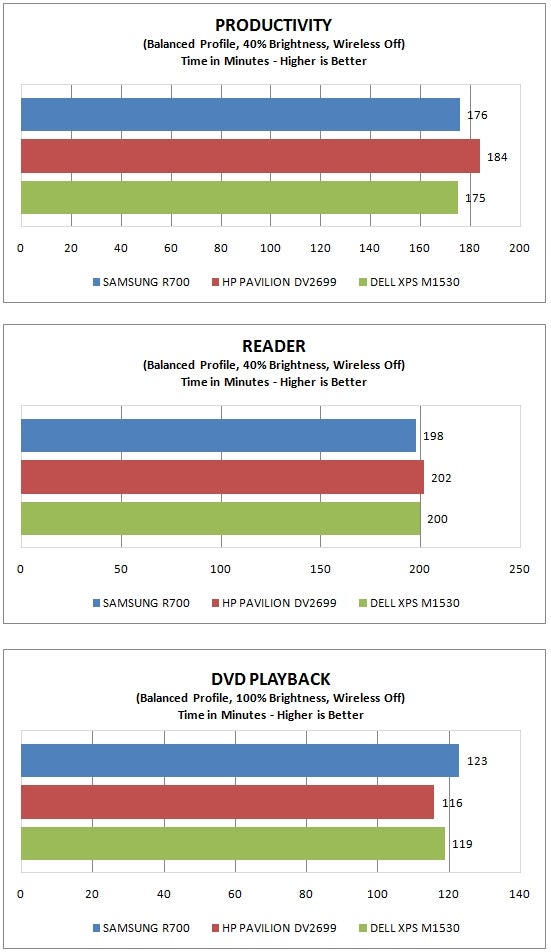