It should go without saying that it’s a lot easier to bag yourself a bargain laptop these days. It’s a point that’s come up frequently of late, and one company that has done more than most to drive this along has been Samsung. We’ve looked at a few of its value efforts recently, including the R700 and its latest configuration of the venerable Q45. 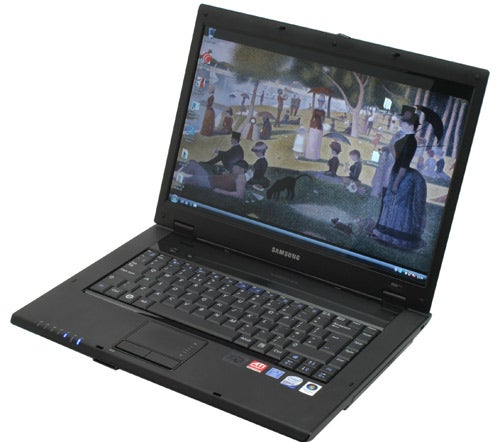 Both struck a particularly nice balance between design and features at prices that were exceedingly attractive. Indeed, if you take a look at the notebook section of our shopping channel, you’ll see that the R700 is at the top of popularity list – a place it has held for quite some time. Can Samsung achieve the same with its 15.4in offering, the R60+?


At marginally under £450 inc. VAT and delivery the price is certainly right, but competition in the 15.4in arena is if anything a little more fierce than in the 12.1in or 17in segments. Take, for example, the Dell Inspiron 1525, which hovers over everything menacingly, offering excellent design, customisation and a decent set of features at prices that would make anyone raise an eyebrow. Meanwhile, the 15.4in offerings from manufacturers such as Toshiba, HP and many others are really quite strong, so the R60+ will have to go some way to impress. 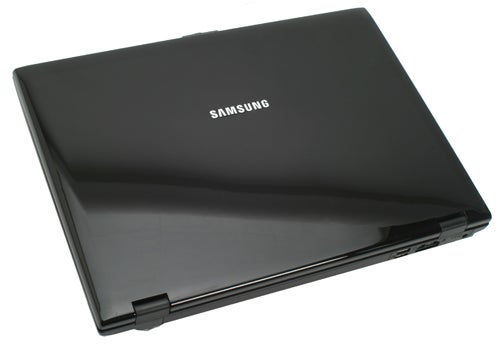 Aesthetically the R60+ is typically Samsung, with its glossy black exterior and all black internals giving it that familiar ‘id’ as seen on its TVs, monitors, MP3 players, printers – pretty much everything really. For the most part this looks good without being as revolutionary as it might look on the TVs, while you will always have to contend with the fingerprints and scratches on the lid. Don’t expect your R60+ to look pristine after a year.


One thing Samsung has been strong on, however, is making its larger chassis appreciably thin and portable and the R60+ is no different. With a thickness varying from 31.1mm at the front and 35.8mm at the back it’s quite slim for its size, while the 2.68kg weight isn’t too bad either. 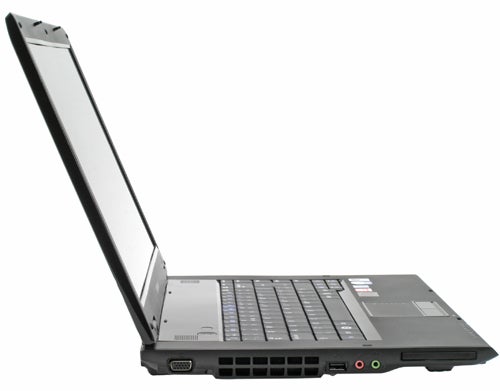 Inside, the R60 pairs up a nice balance of components for the casual user. Directing proceedings is an Intel Core 2 Duo T5450 running at 1.6GHz, with 2MB L2 Cache and a 667MHz Front Side Bus. It’s a great entry-level CPU, providing competent raw performance while adding the battery enhancing features of faster and more expensive siblings. This is supported by 2GB RAM, while graphics are provided by the integrated ATI Radeon Express 1250 chipset. This won’t provide much by way of gaming performance, but is enough to power the Aero effects in Vista

Perhaps the best feature, though, is the capacious 250GB SATA HDD. This is a lot of storage for the price, leaving enough space for plentiful music, photo and video collections. Elsewhere, the feature set is a little more basic. Obviously you get both wired and wireless networking – that’s a given – though you can forget about Draft N wireless or Gigabit Ethernet. Another staple is an 8x DVD+/-RW drive, but conspicuous by their absence are Bluetooth and a WebCam.


You also don’t benefit from nice extras such as HDMI and connectivity overall continues the no frills focus. You get three USB ports, D-SUB (VGA) for connecting an external monitor, a 54mm ExpressCard slot, a 2-in-1 SD and MMC card reader and audio outputs and inputs for headphones and a microphone, but no FireWire.

Clearly, then, if you’re after a flawless all rounder then the R60+ isn’t quite the solution, but then at this price that isn’t a great surprise. Moreover, what is does have will suit the kind of user looking for a sub-£500 notebook quite well, so its lack of the finer details isn’t of great concern.


It helps, too, that other elements of the R60+ are pretty solid. As is the case with many Samsung notebooks, the screen is a good one. It’s bright, sharp and surprisingly colourful and though the glossy finish results in the predictable reflection issues, this shouldn’t be a problem indoors and it does make photos and video look that little bit richer. 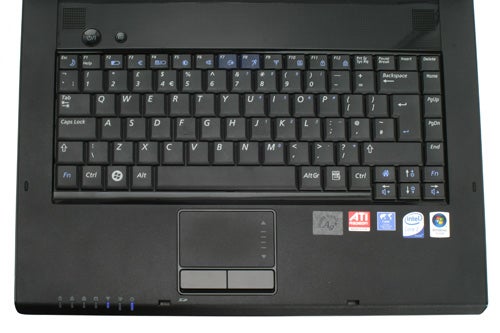 Likewise, the keyboard on the R60+ is a fair bit better than on some “budget” notebooks. Keys have a decent level of travel depth and response, and despite the one regular annoyance of having the Fn key to the left of the Ctrl key, the layout is quite good. This, combined with the good screen and well proportioned touchpad, make the R60+ comfortable and easy to use.


Audio, however, isn’t such a strong point. For basic requirements the integrated speakers will suffice, but if you want to listen to music or watch film, expect to invest in some decent headphones or desktop speakers.

At this price you can’t expect stellar performance but for most purposes the R60+ is more than capable. The 1.6GHz CPU and 2GB of RAM ensure it’ll run the usual basic applications without any problems, and it won’t begin to chug just because you have anti-virus and other applications running in the background. Vitally, unlike some “cheap” notebooks it has no problem running Vista. 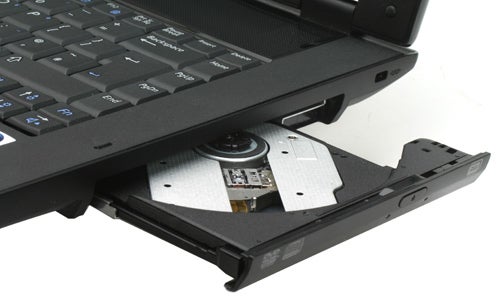 As noted previously, however, you won’t be enjoying any games. Even fairly scalable games such as Trackmania Nations Forever, the free edition of Trackmania United Forever, proves a challenge and only running the game at the ugly minimum settings provided a playable 44.5 frames per second.


This, however, is pretty unimportant compared to battery life and it’s in this department that the R60+ ultimately let’s itself down. On paper there’s no reason to be concerned, but despite a configuration that should suit decent battery performance, a relatively low capacity battery meant a mediocre two hours and 28 minutes in the Productivity segment of MobileMark 2007. This marginally improved in the Reader test, but the DVD playback test ended before two hours and when you compare this against the Samsung R700, the R60+ even trails it despite having a smaller screen and integrated graphics. 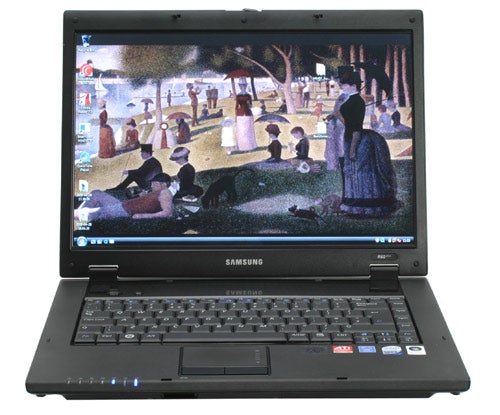 This rather poor battery performance is a bit of a problem. For this price one can accept plenty of compromises, be it in features or in merely competent performance. But, one thing that everyone wants and/or needs is reasonable battery life and though the R60+ may suffice for some, other similar specified and priced machines can offer a lot more longevity away from the mains.


For some the price may prove very tempting, but disappointing battery performance makes a significant dent in its appeal. If you can accept this weakness, however, this is a solid notebook that benefits from a large hard drive and adequate performance for most users. 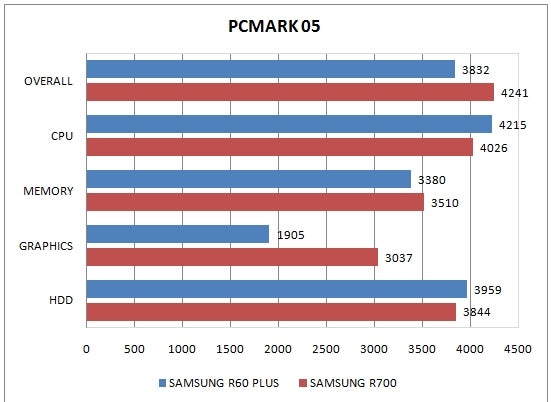 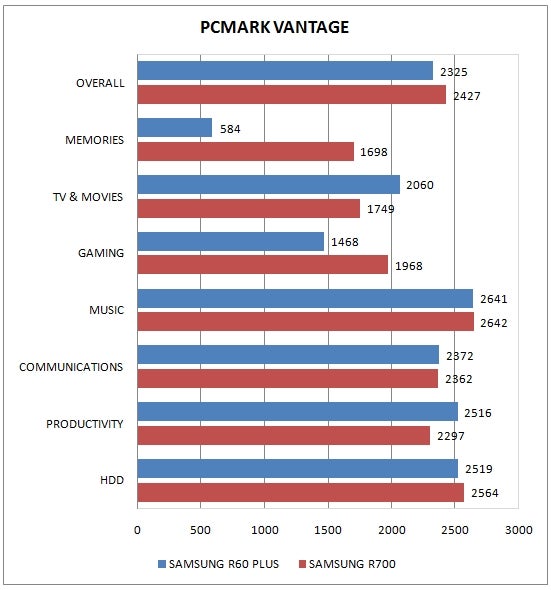 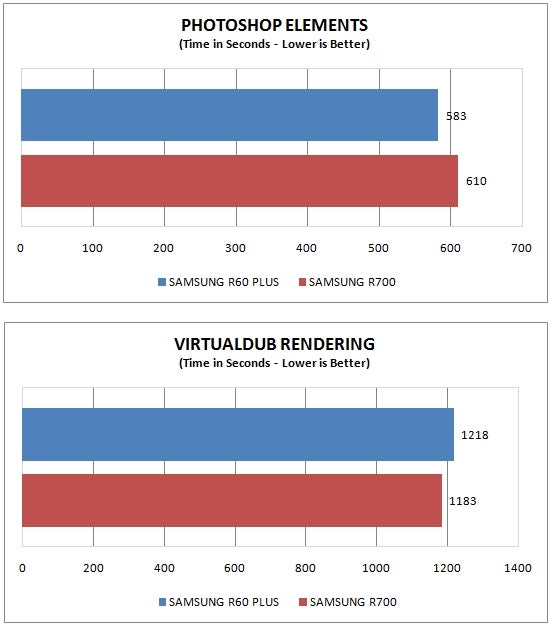 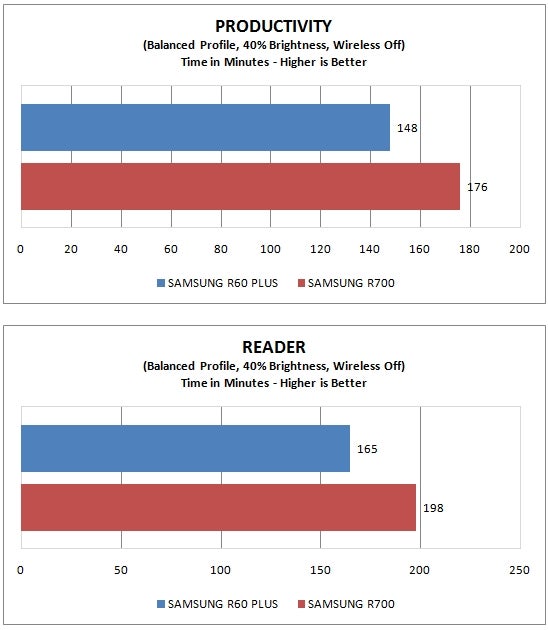 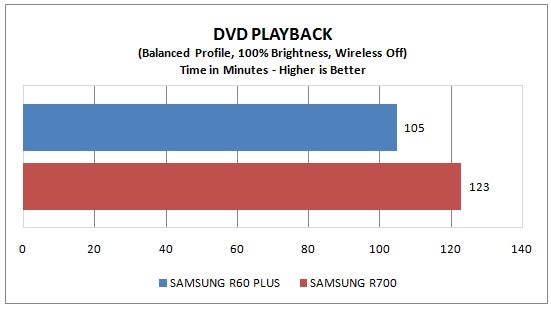