If you’re after a good value, well-made laptop, a Samsung is always worth looking at. Today we’re looking at the R580, a 15.6in desktop replacement laptop, which is among a slew of new laptops using one of Intel’s new Core i3 processors meant to replace the Core 2 Duos of old for mainstream machines around the £500 to £600 mark.


In most other respects, though, the two are identical and since Samsung neglects to install a 64-bit version of Windows 7 Home Premium, despite including 4GB of RAM, the two should perform similarly. Other specs for both include Wireless-N Wi-Fi, Gigabit Ethernet and Bluetooth 2.1+EDR, which cover all the basics you’d want at this price. 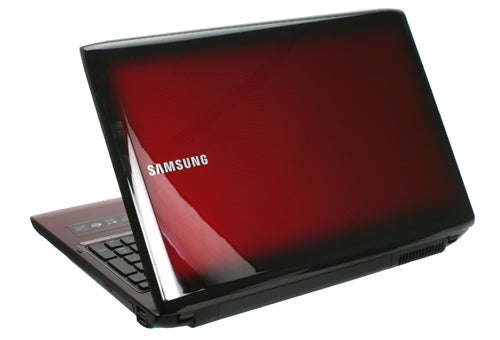 Upon opening the box the first impression of the R580 is of its striking dark red and black graduated lid. This, it appears, is a return to the ‘touch of colour’ theme that Samsung flirted with a year or so ago, only to drop it due to the somewhat unrefined appearance. Clearly the Koreans have cracked it, however, since the finish on the R580 – infused with swirly patterns – looks the business. Samsung also reckons this glossy plastic finish is more scratch resistant. We can easily believe this, our model hasn’t been scuffed in our time with it, but it can do nothing to prevent the usual fingerprints and smudges.


This theme is continued on the inside of the machine, though with slightly less subtlety. It still looks good, though, particularly when matched with the matt black screen bezel and minimalist design. Samsung has always taken a less is more approach to laptop to design, which is fine with us. 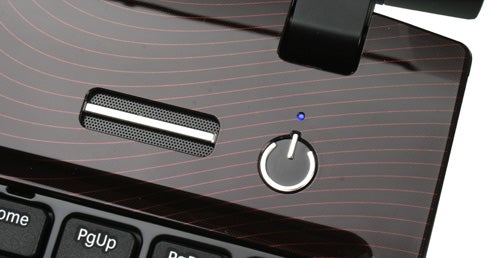 Build quality, as is normally the case with Samsung laptops, is more or less faultless. Sturdy hinges and good quality plastics provide plenty of reassurance, but our model did suffer from a slightly uneven base – the front left rubber foot not making contact on a flat desk. This is a little irritating, but we’d be surprised if the problem is widespread.

Connectivity is thorough, including all the things normal users will need and one or two nice extras. Both VGA and HDMI are on offer, as are a total of four USB ports – one of which doubles as an eSATA port. You get just the two audio jacks (one headphone, one microphone), but you do get an increasingly rare ExpressCard slot (34mm) and the more ubiquitous multi-format card reader. One of the USB ports also supports USB standby power, so will charge compatible devices even when the laptop is turned off. 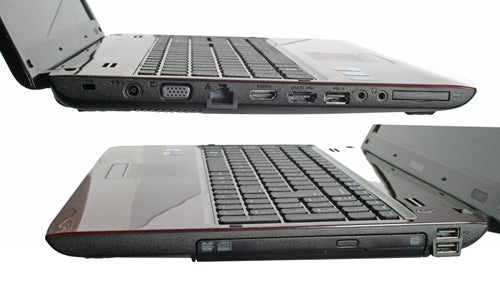 Samsung can generally be relied upon to offer a decent keyboard and the R580 reinforces this reputation. It’s another of the increasingly common isolation/chiclet keyboards and Samsung has squeezed in a number pad as well. Key actions are very light and precise, which combined with a good layout makes it easy to develop a nice, rapid typing speed.


Our only concern regarding typing on the R580 actually relates to the touchpad, which is positioned a little too much to the right. Occasionally we found it caused us to jog the cursor when typing, a problem that was improved (not removed) by pushing the ‘Palm Check’ feature of the touchpad driver to its maximum setting. 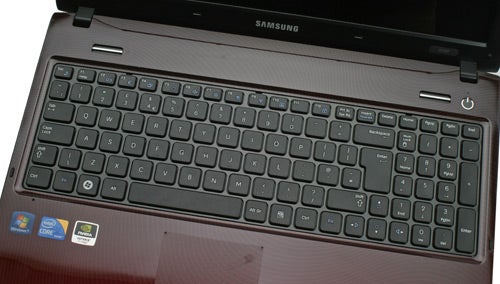 As for the touchpad itself, it’s very good. It’s almost seamlessly integrated into the body of the machine, with the glossy finish switching to a smooth, low-friction area for the touchpad. To further accentuate the difference, the touchpad has four blue LEDs (one on each corner) that light up when you use the pad. Its two buttons, which form one rocker switch, offer good, defined feedback. Multi-touch support is included, which among other things allows for convenient two-finger scrolling.


When spending this kind of money, one rarely expects great things from the display. This is true of the R580, but for the money it is pretty good – colours are good, text is sharp and it’s more than bright enough for normal indoor conditions. Viewing angles, while not prodigious, are better than we’ve seen in some cheaper laptops, so two or three people can view it at once without too many problems.

Unfortunately Samsung continues to use fairly dreadful speakers. While the stereo speakers reach decent volumes, for a full-size laptop they don’t produce the richness and depth one would like. As such, while okay for online clips and such like, for music and films they’re far from suitable.

Intel’s Core i processors, in all their forms, have impressed us greatly and the Core i3 in the R580 is little different. In PCMark Vantage the R580 outperformed the likes of the (article:12289 Sony VAIO CW1S1E/P) we reviewed last year by a comfortable 10 per cent. Had Samsung used a 64-bit OS, like the Sony, the R580 would likely have performed even better. Another instructive comparison is the Samsung R730 we reviewed last week. While it costs slightly over £100 less (18 per cent), the R580 outperforms by 28 per cent. Even ignoring the superior feature set (e.g. better design, Gigabit Ethernet, Bluetooth and larger hard drive) that’s a pretty good return on investment. 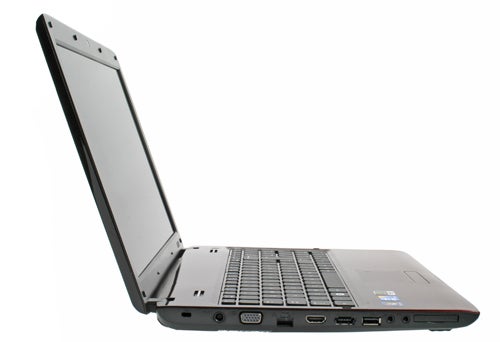 This is a machine that could be used for some gaming, too. It produced a comfortable 50.2 frames per second (fps) in our Trackmania Nations casual gaming benchmark, compared to the paltry 13.4fps of the R730. A result of 16.6fps in the more demanding S.T.A.L.K.E.R: Call of Pripyat benchmark does show its limitations, but with some compromise many modern titles will run on the machine okay.


In our MobileMark 2007 battery life benchmark the R580 managed 211 minutes (three hours, 31 mins) of productivity and 104 minutes (1 hour, 44 minutes) of DVD playback. Though nothing particularly outstanding, these are both good results for a machine of this kind. Reducing the brightness (we test at 100 per cent) in DVD playback would probably increase the latter to over two hours, so you could watch most films on a single charge. 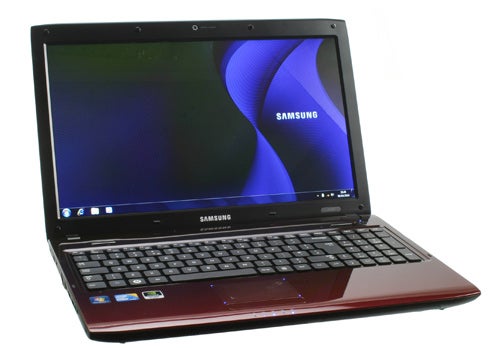 
A combination of style, features, performance and value make the Samsung R580 a great, well-balanced all-rounder that will stand the test of time better than most.

Had Samsung installed a 64-bit OS then the R580 would have performed even better. Nonetheless its performance for the price is outstanding and means the R580 should last a long time before it needs to be replaced.

You can play some games on the R580, but the Call of Pripyat result shows you’ll need to make some sacrifices for more recent titles.

A six-cell (4,400mAh) battery ensures decent battery life. For a machine the size of the R580, it’s more than good enough.