Last year Samsung unveiled its ‘touch of colour’ design theme. This started on TVs, but soon found its way onto its monitors and somewhat less successfully its notebooks as well. Given the less enthusiastic reception, though, it’s no surprise to see the Korean giant abandoning the theme in its latest notebooks for something a little less polarising. Its first effort is the R522 and it could be onto a winner.


Built around a 15.6in 16:9 ratio display the R522 is an ideal affordable all-rounder. Available for between £550 and £600, it features a decent 2.0GHz Intel Core 2 Duo T6400, a plentiful 4GB DDR2 RAM and a capacious 320GB hard drive. This trio of components provide a good mix for a family PC, providing enough processing power to perform relatively intensive tasks, like photo or video editing, as well as a decent amount of storage to boot. 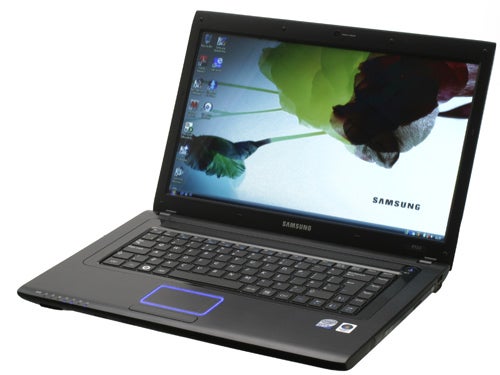 You can probably rule out gaming on the R522, though, since it utilises Intel’s GMA X4500M chipset, which is okay for undemanding older titles, but really struggles with anything recent. What it lacks in gaming credentials, however, it should make up for with frugal power use, something we’ll be covering a little later on.

Outside of the core specifications the R522 has a decent feature set, though it is lacking a couple of things. For starters Wi-Fi is of the Wireless-G variety, which means slower data rates and shorter range, but there’s also no Bluetooth. In fairness, a lack of Bluetooth is a common sight among more affordable notebooks, but some do manage to offer both Draft-N Wi-Fi and Bluetooth, or at least one of the two, albeit by economising in other areas. Clearly if you want and need either the R522 might not be for you.


What the R522 does deliver is excellent connectivity. There are three dedicated USB ports, plus one further USB/eSATA dual-purpose port for a total of four USB ports. We can’t remember the last time a notebook of this size and price offered this many. Joining the complement of USB ports is an HDMI output, VGA, Ethernet, headphone and microphone jacks and a 54mm ExpressCard slot. On the front, meanwhile, just below the large selection of status lights, is a 3-in-1 memory card reader.

So the feature set is pretty solid, but the new design is what really sets the R522 apart since it’s probably the most refined notebook in its class – putting the likes of the Toshiba Satellite A350-11N and Dell Inspiron 1545 to shame in the process. It achieves this by keeping things simple. 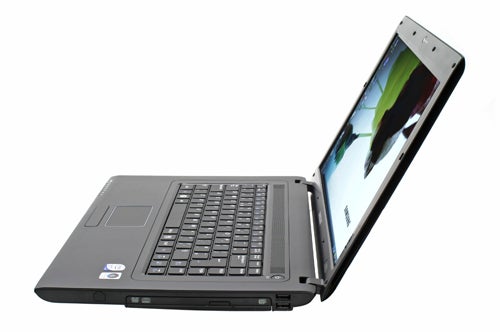 On the outside Samsung retains its now trademark glossy black lid. Yes, it does attract fingerprints and grime, but it’s very classy too and is enhanced by smartly tapered edges that merge seamlessly with the rest of the machine. Inside, things are similarly uncluttered. Gone is the slightly garish ‘touch of colour’ and glossy black finish; in is an attractive and muted gunmetal-grey effect that has the look and feel of brushed metal, though we rather suspect it actually isn’t metal at all. Frankly, whether it is or not is beside the point, since it’s very attractive and eliminates the irritants of fingerprints and grease that plagued the last generation of Samsung notebooks.


This contrasts nicely with the sliver of glossy black that surrounds the keyboard, but the really funky touch comes with the touchpad. Not only is it nicely integrated into its surroundings, but it also has a rather nice backlit strip running around it that lights-up blue when in use. It’s a really cool feature that elevates the R522 above the usual throng of mid-range notebooks. All-in-all the R522 has all the hallmarks we look for in notebook design: comfort, cohesion and a little bit of class. 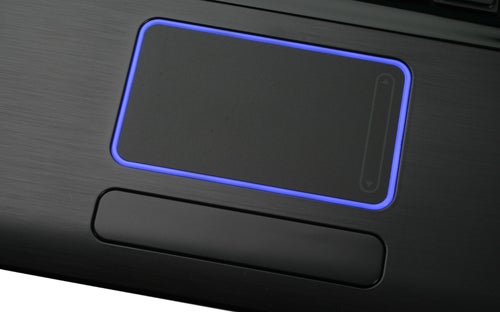 This refinement in design is matched by good input devices. Utilising a tile-style keyboard (not be confused with isolation), the keyboard sports an excellent layout. All the important keys are in the right place, while Samsung has even added Page Up, Page Down, Home and End keys down the right-hand side of the keyboard – a far more intuitive positioning than seen on many notebooks.


Keys themselves sport a nice amount of travel and a crisp, positive response, though we think this style of keyboard does feel a little light and flimsy. However, it’s not a big issue and the touchpad can’t be faulted. It’s nicely positioned and the two buttons, signified by a single rocker-style button, are crisp and pleasant to use.

Crisp and pleasant are two words that can’t be attributed to the speakers, though. Tinny and harsh, they turn rock music into an unbearable mosh pit of noise, while other music doesn’t fare much better thanks to a complete lack of bass. So though they’re passable for the occasional online video clip, in every other respect they’re trounced by the fundamentally superior efforts of the Toshiba A350-11N. Were one to put its speakers on the R522 you’d have one very impressive system.

Happily, while the audio performance is pretty forgettable, the 15.6in screen is a little more promising. Colour fidelity is nothing outstanding and viewing angles are more or less the same as any other notebook display at this price, but thanks to its LED backlight, it’s very bright. This can be particularly advantageous in brightly lit environments, offsetting the reflectivity of the glossy high-contrast display somewhat. 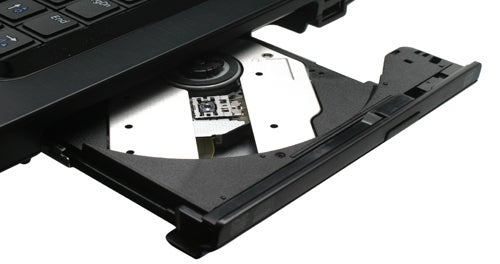 Our only other point regarding the display is that, due to its 16:9 ratio, it has a native resolution of 1,366 x 768 – meaning fewer vertical pixels than unusual. This has been a bone of contention for a little while now and we don’t see that changing, but neither can we see the trend toward 16:9 ratio displays disappearing. So, though there are still 16:10 notebooks out there, 16:9 appears to be the shape of things to come.


Few complaints, gaming aside, can be made of the R522’s performance. It’s not a speed demon in modern terms, but the 2.0GHz CPU offers plenty of processing power. Our only regret is that Samsung hasn’t opted to supply a 64-bit version of Windows Vista Home Premium to match the 4GB RAM supplied. We’ve never understood why manufacturers don’t do this, especially given the price difference between 32-bit and 64-bit OS versions is fairly negligible these days.

For reference, we managed 22 frames per second in our Trackmania Nations benchmark, but at 1,366 x 768 we had to turn the settings down to the low quality preset, underlining the lack of gaming credentials.


Battery life, however, is very promising. In the multi-tasking Productivity benchmark the R522 achieved almost three and a half hours, increasing to four hours in the idle Reader test. In the high-intensity DVD test, meanwhile, the R522 returned two hours hours and 11 minutes of runtime – a figure that could be increased by reducing the brightness we run the test at. 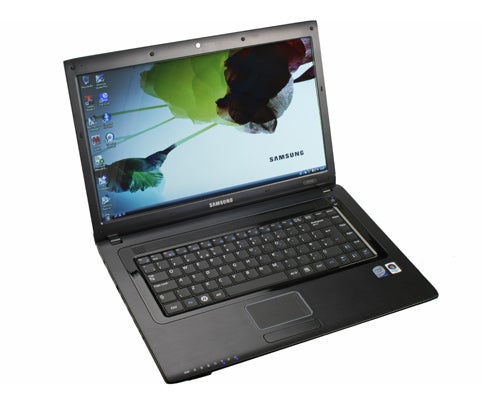 
Samsung’s latest mainstream notebook does lots of things well. It looks great, adding a little class and refinement to a sector better known for well-featured but prosaic machines. It also has a decent base spec, very good connectivity and excellent battery life. However, it is let down by truly dreadful speakers and the lack of both Draft-N Wi-Fi and Bluetooth. These aren’t deal breakers, so if you can live without them the R522 is worth serious consideration, but they do preclude the R522 from an award.

In PCMark Vantage the R522 isn’t the quickest around, but neither is it a slouch. Regular family computing tasks, such as image and video editing, should prove no problem at all, though the Gaming segment shows you can forget meaningful gaming on this system.

A result of nearly three and a half hours in the multi-tasking Productivity segment bodes well for the R522’s longevity.

Nearly four hours in the idle Reader test, which simulates reading a PDF document, demonstrates that this machine is class-leading when it comes to battery life.