What is the Samsung R5?

The WAM5500 (or R5 for short) is Samsung’s latest wireless multiroom speaker. It’s one of three new models launched at the tail end of 2015 alongside the R1 (WAM1500) and R3 (WAM3500). The R5 sits one step down from the excellent R7, which earned top marks in our review earlier this year. While the feature list and functionality remain the same, the R5 is a more affordable and less eye-catching affair than the R7.

Competition is fierce in the growing multiroom speaker market, particularly at this lower price point where the likes of Denon, Sony and LG ply their trade. So let’s find out if Samsung’s new addition has the quality to compete. 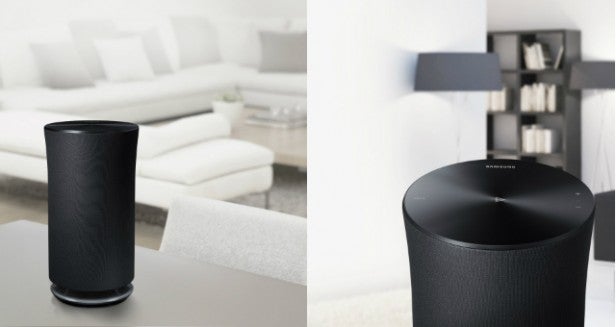 Cosmetically, the R5 is a very different animal than the R7, eschewing the opulent egg-shaped design for a cylindrical enclosure that flares at the top. But one thing they have in common is a 360-degree shape that allows Samsung’s Ring Radiator technology to work its magic – more on that later.

It may lack the R7’s wow factor, but the R5 is eye-catching in its own way. Most of the unit is covered in black cloth that sparkles slightly in the light, while the rounded base has a subtle brushed finish. Overall, the look is minimal and discreet – most people won’t even realise it’s a speaker. Its distinctive upright shape gives the R5 a small footprint, which makes it ideal for placing on a shelf or desk.

Despite its modest appearance, the R5 isn’t completely devoid of flair and invention. The seemingly blank top panel is actually one big UV-coated touchpad that allows you to skip tracks with one swipe of the finger, or pause a track by tapping it.

On one side are touch-sensitive volume controls, while a Mode button on the other side lets you toggle through the inputs. There’s no power button, but it goes into standby following 15 minutes of inactivity.

Touch any of the controls and a small OLED panel appears in the middle, showing you volume levels and various icons. When you flick through the inputs, a female voice tells you which one is selected. It’s achingly cool.

Underneath the speaker is an angled input for the mains lead, with a hole in one side of the base that allows the cable to escape. It’s fiddly but manageable. A small button lets you set up Wi-Fi or add the speaker to a network without having to access the smartphone app.

The R5’s key feature is omnidirectional sound, made possible by Samsung’s Ring Radiator technology. A 5-inch woofer at the bottom and a 1-inch tweeter at the top both disperse sound through an Acoustic Lens – which explains the gap just above the base – spreading the waves evenly in all directions.

Theoretically, this results in the same sound quality no matter where you are in relation to the speaker. The idea is to eliminate the “sweet spot”, where you get the optimum sound quality only from a particular listening position. This isn’t how most people listen to music. 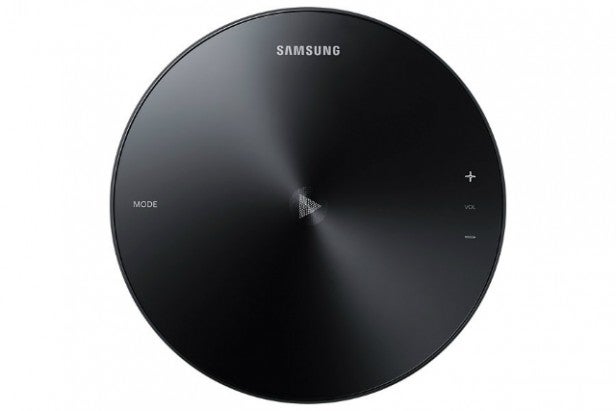 The R5 also boasts dual-band Wi-Fi and Bluetooth 4.0. If you have several Samsung speakers around the house you can create a multiroom system, conducted by the Multiroom App 2.0, which I’ll explore later. But one new twist is that the app is now available for the Samsung Gear S and Apple Watch, allowing you to access the song queue list and speaker list, or control playback and volume.

The app allows you to stream music from your smartphone, DLNA devices and a variety of online services, including Spotify, Deezer, Murfie, Napster, Qobuz, 7digital, 8tracks, TuneIn and Rdio. The lack of Tidal is a shame given the R5’s hi-res support, and SoundCloud would have been nice too – here’s hoping they’ll be added soon.

There’s hi-res audio support, including FLAC, ALAC, AIFF and WAV files up to 192kHz/24-bit. Naturally it also plays lossy formats such as MP3, WMA, AAC and OGG. Finally, TV SoundConnect allows you to beam sound from a compatible Samsung TV to the speaker.

This year, Samsung has dramatically improved the user-friendliness of its wireless speakers, doing away with the Wi-Fi Hub and revamping the multiroom app. As a result, the R5 is remarkably easy to set up and operate.

The first step is to download the Multiroom App 2.0 onto your smartphone. Select the “Add Speaker” option in the setup menu and the app searches for speakers. Once discovered, key in your Wi-Fi password and it joins the speaker to your network. A female voice says “the connection is complete”.

This voice pipes up at various points to let you know when various inputs are “ready”, or to confirm the speaker’s position in a multichannel setup. It’s a nice touch.

The Multiroom App is beautifully designed. Eye-catching colours, classy fonts and stylised icons lend an air of sophistication, plus it’s smooth and intuitive to operate. It could have been confusing in the wrong hands, but Samsung’s expert implementation finds the right balance between style and usability.

Unlike the previous version, which buried music behind a long-winded menu structure, everything can be accessed from the very first screen. Tap the Music Source banner at the top and a dropdown menu displays a list of music services and available devices.

You can browse songs using a sidebar on the right, or edit the playback queue by tapping the track name. At the bottom of the screen are playback controls and a volume slider, while the Options menu offers an equaliser with Pop, Jazz and Classic presets. You can quickly change speakers using the icon at the bottom.

But the coolest part is the virtual jog dial in the middle of the screen, which lets you skip tracks simply by dragging your finger round the edge.

Controlling a multiroom system is easy. Each speaker in the ecosystem is displayed in a box with individual volume sliders and EQ settings. You can select different music sources for each speaker, or you can group them together and play the same thing through them all. To do this, just drag the boxes on top of another. This level of flexibility is impressive. 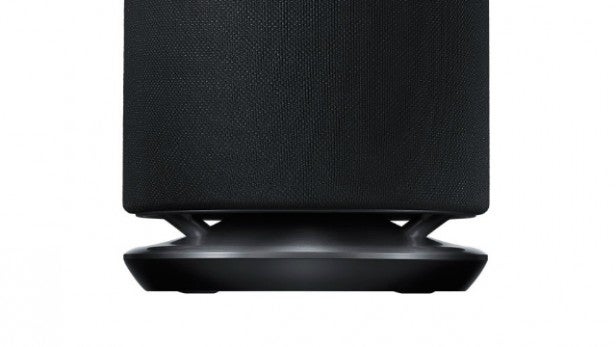 In terms of sound quality, the R5 isn’t quite in the same league as the R7, but it’s still an impressive performer. Its sound quality is punchy, well balanced and detailed, which comes as a pleasant surprise given the speaker’s unconventional method of dispersion.

There’s plenty of bass on offer, but it’s well integrated and doesn’t get too bloated or muddy. This is a tight and agile presentation, demonstrated by hi-res favourite “Get Lucky” by Daft Punk – the kick drums and live bassline pulse together in perfect harmony, while the R5 conveys the rest of the track with boundless energy and superb dynamics.

The R5 shares Samsung’s characteristically crisp tone, which flirts with brightness without stepping over the line. It’s a livelier and more entertaining listen than the Denon Heos 1 or Sony SRS-X88, making it ideal for up-tempo dance tunes. But it doesn’t steamroller over the subtleties when you switch to more languid, intricate genres such as jazz and soul either.

Play “Shadow Dance” by The Internet and the crisp texture of the snares evokes the feeling of a live performance. There’s lots of detail in the singer’s drifting, ethereal vocals and the keyboards are warm. Percussion and hi-hats sparkle.

But the key aspect of the R5’s performance is its omnidirectional dispersion, which works a treat. Move around the room while it’s playing and there’s practically no change in the speaker’s tonal characteristics or balance. Treble remains crisp, while bass notes maintain their weight and attack.

Granted, you don’t get the high-frequency insight or chest-thumping bass of systems such as the Naim Mu-So or Monitor Audio S200, but it’s not a long way off. What you do get is a very enjoyable all-round performance with any track you throw at it. 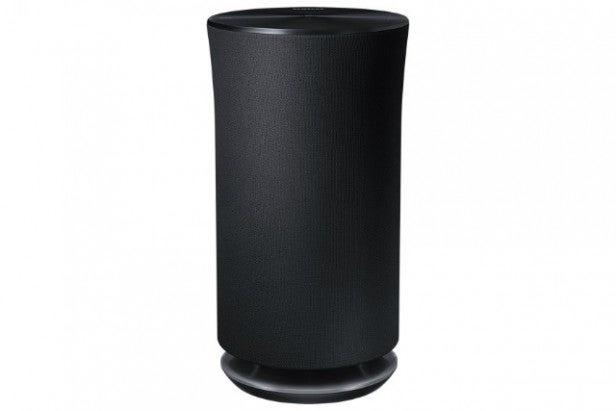 Should I buy the Samsung R5?

The R5 is another excellent multiroom speaker from Samsung and easily deserves a place on your Christmas list. The cylindrical design lacks the wow factor of the R7, but it’s stylish in its own way – particularly that nifty touch panel. Plus, the upright design and small footprint make it easy to accommodate on a desk or shelf.

Samsung’s slick, stylish app boasts a wealth of streaming services and makes it remarkably easy to control multiple multiroom speakers. And with hi-res music support and Bluetooth on board, you’re getting a lot of features for your money.

Of course, this would all be for nowt if sound quality wasn’t up to scratch. Thankfully, though, the R5 is a fine performer. There’s enough detail, bass and attack to make any song sound great, and the omnidirectional Ring Radiator technology does exactly what it says on the tin. I still think the Monitor Audio S200 and Samsung’s own R7 sound better, but on the whole it does a fine job.