What is the Samsung R3?

The R3 is the middleman in Samsung’s latest trio of cylindrical multiroom speakers, sitting between the entry-level Samsung R1 (£150) and the step-up Samsung R5 (£350).

The R3 is slightly larger than the R1, making it more suitable for bigger rooms, but you pay an extra £100 for the privilege. Otherwise it boasts all the same multiroom features as the R1, R5 and Samsung R7, allowing you to send music around the house via Samsung’s smartphone app. 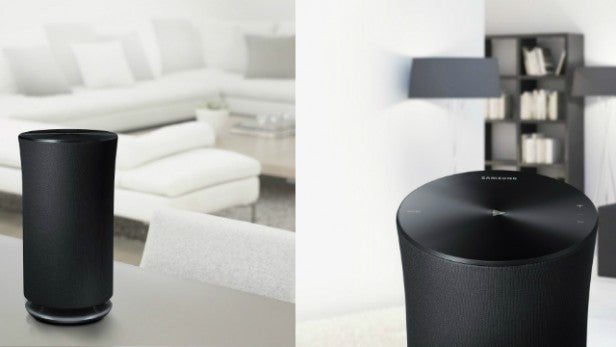 The cylindrical R3 (below, middle) is visually similar to the R1 and R5 but size-wise it’s somewhere between the two, measuring 273mm high by 144mm wide. It’s a stylish, well-made speaker with black cloth hugging the sides and a generally weighty feel.

There’s a gap at the bottom between the main body and the sturdy base, which the R3 uses to channel air from the 4.2-inch woofer. The gently flared top end is a nice visual flourish, but on the whole this is a modest, minimal affair – particularly when compared with the stunning egg-shaped R7.

The top surface is one big control panel – tap to pause playback and swipe to skip tracks. In the middle you’ll find the same OLED display as the R5 (but missing on the R1), which features animated icons. Around the edge are a few touch-sensitive buttons that control volume and input selection. There’s no standby key but the unit automatically shuts down if it hasn’t been used for a while. 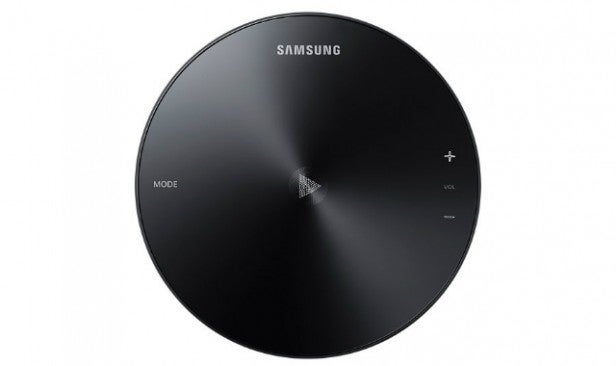 Underneath the speaker is a recess for the power lead (which pokes out through a gap) and a button that helps you connect the R3 to your Wi-Fi router. There are no inputs for portable devices – wires are a dirty word to the R3.

The feature list is identical to that of the R5, including Samsung’s omnidirectional Ring Radiator technology. The 4.2-inch woofer at the bottom and 1-inch tweeter at the top spread sound evenly in all directions, giving you the same sound quality from anywhere in the room. It accounts for the fact that most people are doing other things while listening to music these days, not sat directly in front of their stereo system.

You can stream music to the R3 via dual-band Wi-Fi or Bluetooth 4.0, while TV SoundConnect lets you beam sound from a compatible Samsung TV to the speaker.

You can use the R3 in a multiroom system with other Samsung speakers around the house, or you can deploy a pair of R3s as surround channels in a 5.1 system with one of Samsung’s multiroom soundbars. 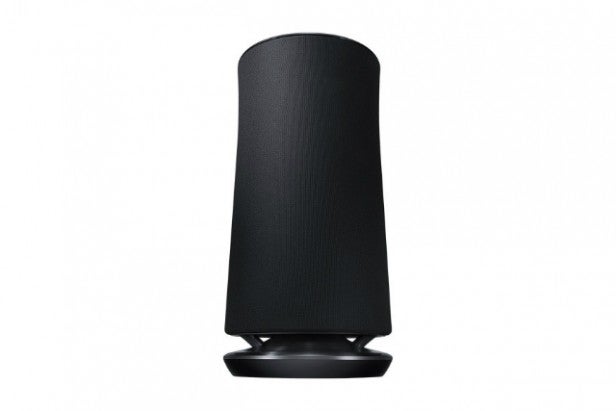 It’s all conducted by the Multiroom App 2.0, which is available for Android and iOS devices – including the Samsung Gear S2 and Apple Watch. It allows you to stream music from your smartphone, DLNA devices and a variety of online services, including Spotify, Deezer, Murfie, Napster, Qobuz, 7digital, 8tracks, TuneIn and Rdio. TIDAL is the only notable absentee, otherwise it’s a tidy selection.

You can play hi-res audio too, including FLAC, ALAC, AIFF and WAV files up to 192kHz/24-bit. Naturally it also plays compressed formats like MP3, WMA, AAC and OGG.

Samsung’s Multiroom App 2.0 is central to the setup process. Once downloaded, just follow the onscreen instructions. Select the ‘Add Speaker’ option in the setup menu and the app searches for speakers. Once discovered, key in your Wi-Fi password and it joins the speaker to your network (confirmed by a voice saying “the connection is complete”).

As I established in reviews of the R7, R5 and R1, the Multiroom App is a triumph. The eye-catching colours, classy fonts and stylised icons make it one of the best-looking multiroom apps around, but Samsung hasn’t forgotten to make it easy to use.

Helpfully, everything you need can be accessed from the first screen. Tap the Music Source banner at the top and a drop-down menu displays a list of music services and available devices. You can browse songs using a sidebar on the right, or edit the playback queue by tapping the track name. 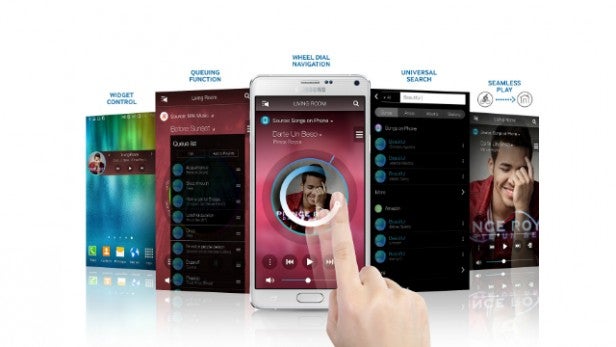 During playback the controls are placed at the bottom of the screen, while a virtual jog dial skips tracks simply by dragging your finger round the edge. The Options menu offers an equaliser with Pop, Jazz and Classic presets, or you can switch to a different speaker using the icon at the bottom.

Controlling a multiroom system is easy. Each speaker in the system is displayed in a separate box with individual volume sliders and EQ settings. You can select different music sources for each speaker, or you can group them together and play the same song through them all. To do this, just drag the boxes on top of another. This level of flexibility is impressive.

However, after using the app for a while I noticed a few niggles. For instance, if you have a large music library and try scrolling quickly down the list of tracks or albums in the sidebar, it freezes every now and again while it loads the next section of the list. Also there’s a universal search tool at the top of the sidebar that only brings up results from a certain section of my NAS drive’s music library.

Another bugbear is the lack of gapless playback. There’s a brief gap in between tracks that segue into each other, which is particularly annoying during live albums.

Like the R1 and R5 before it, the R3 is an impressive performer. It’s more powerful than it looks, delivering a loud, weighty sound that fills the room nicely. It’s also well balanced, backing up its crisp, smooth treble with solid midrange and thumping bass. It’s not the last word in multiroom sound quality but for the money there can be few complaints.

Sonically, the R3’s key feature is its omnidirectional dispersion and it works a treat. Not only does it enhance the unit’s room-filling capabilities, but it also ensures a consistent tonal balance from any listening position. 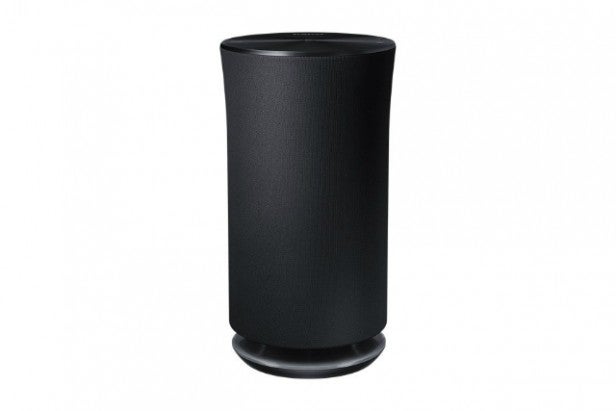 I moved around to room as it played and discovered that treble and bass levels stay roughly the same. You don’t have to sit square-on or shuffle around to find the hallowed sweet spot – the R3 gives you all the listening freedom you need.

High frequencies are crisp and lively, but don’t get too spiky when you push the volume up high. There’s room for a little more subtlety and precision perhaps, but the hi-hats and cymbals in Hey Sister by Tristan sound sweet and rhythmic while lending a pleasing sense of openness. It’s a much smoother listen than Samsung’s soundbars. Only when you reach the highest volumes does the R3 lose composure, with a touch of hardness creeping in.

Play The Best by Opolopo and the R3 makes the track’s vibrant electro-funk sound fat and punchy, but there’s still room for a little more dynamic expression and excitement – the R3 does tend to play it safe when it comes to those big musical moments. The R5 and R7 are slightly better on that score.

It may lack the stereo placement of a conventional hi-fi system, but the R3’s sound is still spacious and well-organised, allowing individual instruments to be easily identified.

Bass is perhaps the R3’s best asset. There’s a considerable amount of low-end punch for such a slight speaker, lending depth to drum beats and male vocals, but the pleasing part is that it doesn’t become overpowering or muddy, resulting in a warm and cohesive sound. 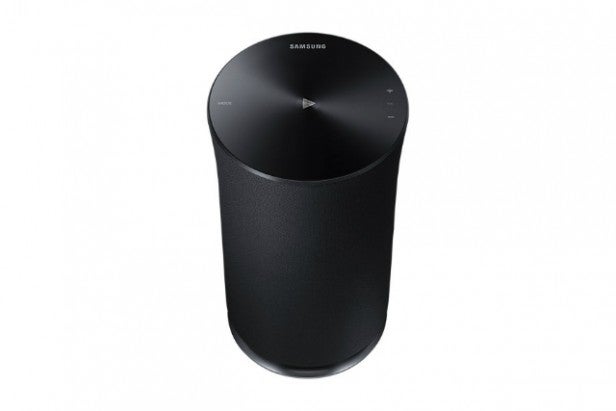 Should I buy the Samsung R3?

Take the R3 home and you won’t be disappointed. It’s robustly built and super stylish, boasting a compact cylindrical design that’ll make a minimal impact on your space. It’s a bit smaller than the R5, but essentially you’re getting the same speaker for £100 less, which is terrific value.

Setup and operation are easy thanks to a nifty touch-control top panel and Samsung’s slick smartphone app, which lets you access an impressive range of music services. Prolonged use has uncovered a few niggles, particularly if you’re browsing a big music library or playing gapless albums, but those aside it’s one of the better multiroom apps on the market.

Most impressive is the R3’s appealing sound quality, with fulsome bass, crisp detail and a spot-on tonal balance. Omnidirectional sound is no empty promise. Sonic performance stays the same no matter where you are, while its powerful, room filling sound is surprising for such an unassuming speaker. It could do with a little more top-end subtlety and greater dynamic clout at times, but on the whole the R3 gets more things right than wrong.