Considering the price, features and performance, the Q65T/Q60T offers plenty of value. You could quibble about it being QLED-lite, but it’s one of the best options at the price.

You may ask why we’re reviewing a 2020 TV in 2021 – and our answer is that now is as good a time as any to bag yourself a TV from the year just gone. As older stock is cleared to make way for newer sets, prices have tumbled, leaving you with a choice of last year’s TV at less intimidating prices.

That said, some may want to hold off. Samsung’s newest range represents a big leap forward, while the 2020 range held itself in a holding pattern – the Samsung Q65T/Q60T was an upgraded RU8000 from 2019. Is performance good enough to make the Q65T a wallet-saving alternative?

The Samsung Q65T/Q60T are effectively the same model, the only difference is a cosmetic one – the Q65T comes in a silver finish, while the Q60T is all black. The Q65T is also exclusive to the UK.

There’s something to be said about the consistency of Samsung’s design. There are zero qualms about the build quality, but the similarity of the range robs them of some character. 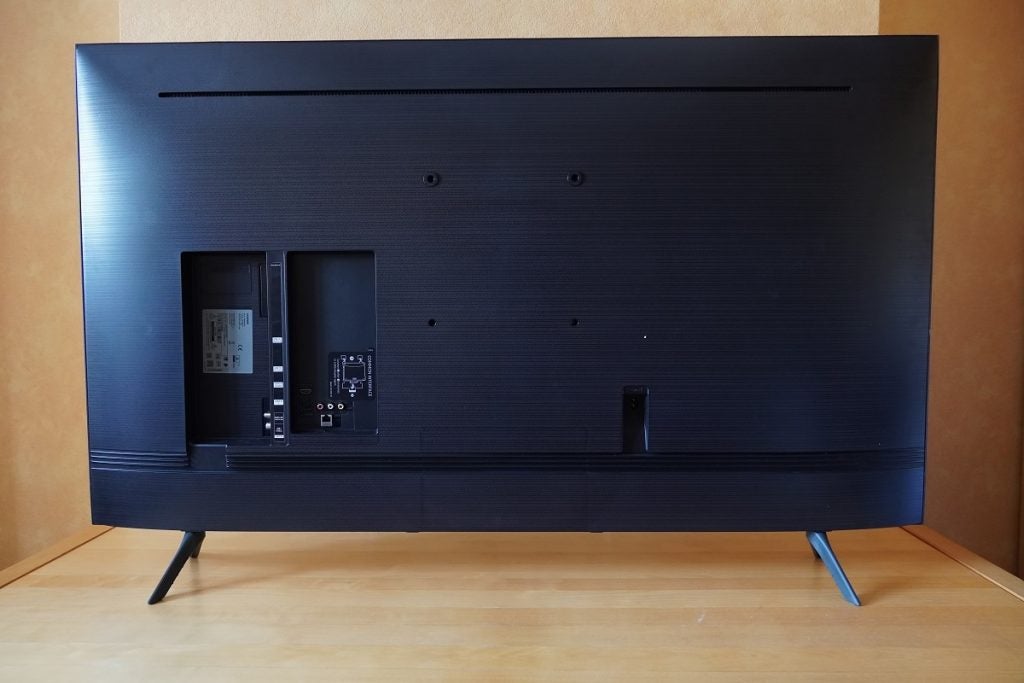 But who watches a TV for its character? The ‘3-sided Boundless display’ is marketing verbiage for describing the bezel as thin. The underside of the Q65T is coated in silver and is the only significant visual difference between it and the Q60T. 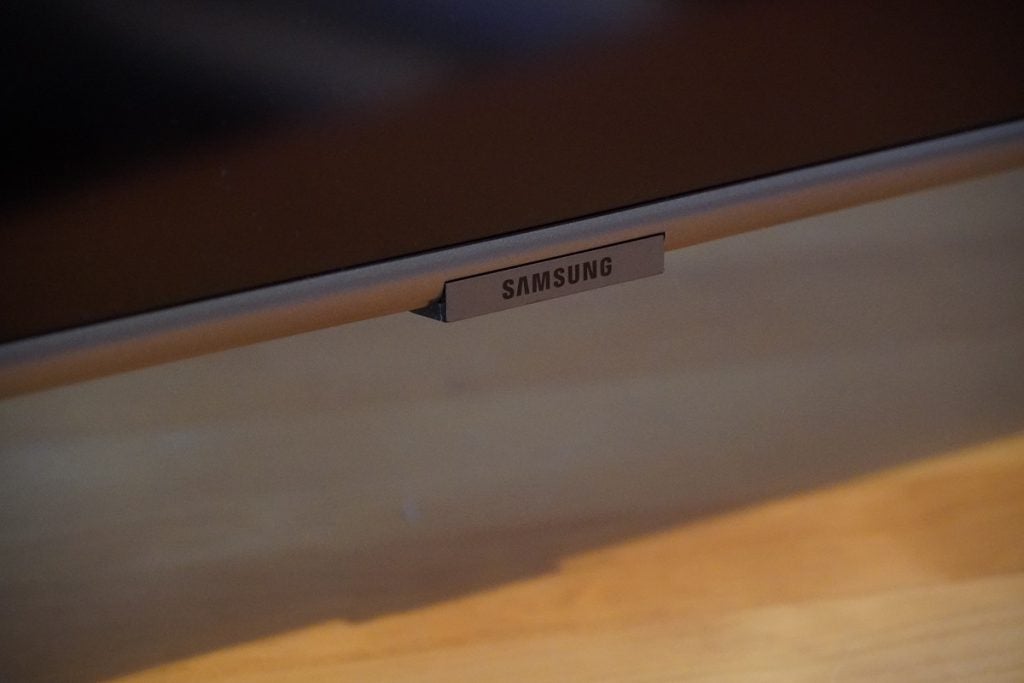 Set-up is simple; slot the feet into place and its done. There’s enough clearance for a soundbar to sit beneath – and at 1230.1 x 705.9 x 57.4mm (WHD without stand), the thought of sticking it up on a wall may appeal. 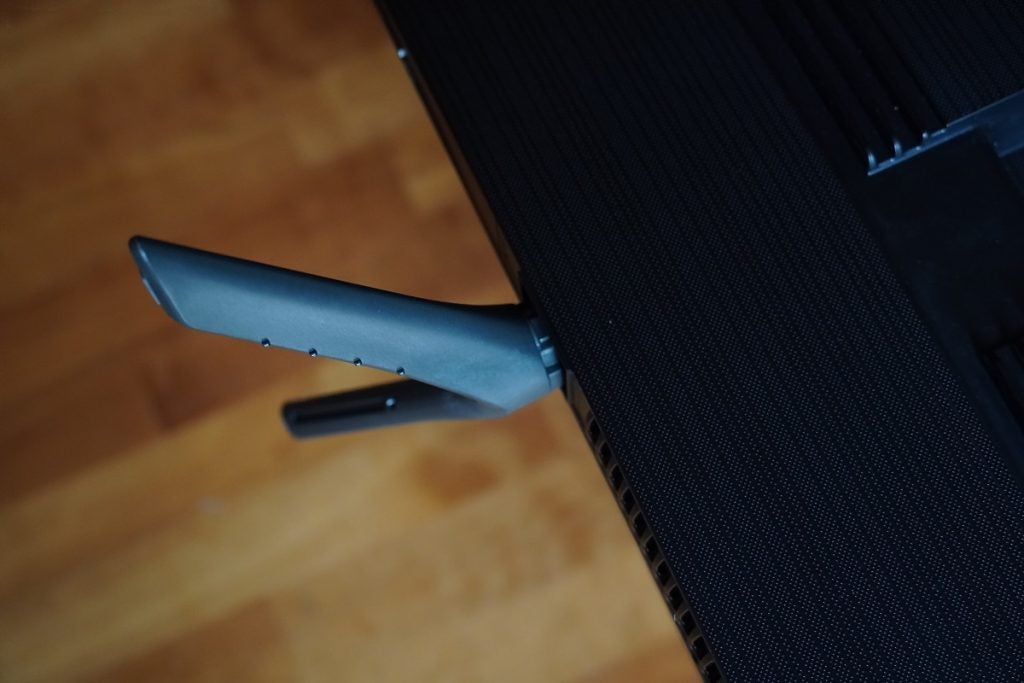 There’s a choice of two remotes: a standard zapper and a more elegant smart effort. The latter is more satisfying to use, presenting a better layout. It also has a built-in microphone for voice commands. 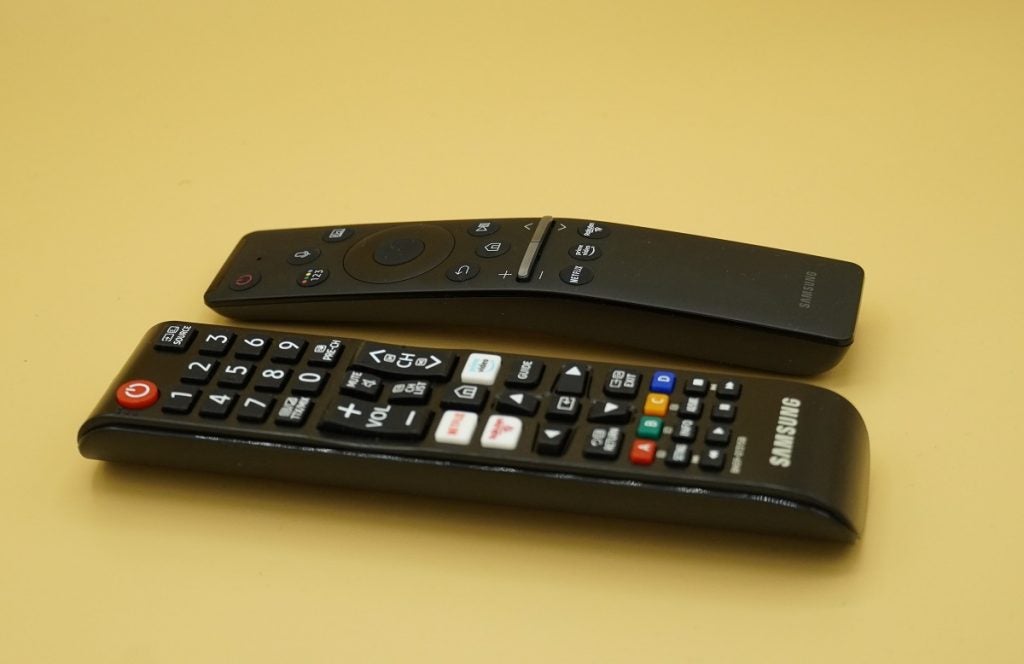 Features – Core Samsung experience remains, but it’s a step down in other ways

Considering the Q65T’s status at the bottom of QLED barrel, its feature set isn’t as advanced as the Q80T or 2020 flagship Q95T 4K TV – but the core smart TV experience remains.

That means access to the TV market’s widest selection of apps through its Tizen-based Eden interface. All the main UK catch-up and on-demand apps are present, along with big-hitters Netflix, Prime Video, BT Sport, Disney Plus, Spotify, Tidal and Apple TV+. Apple Music remains exclusive (for now), while US customers eyeing the Q60T will find apps such as ESPN, VUDU, HBO Max and Hulu. 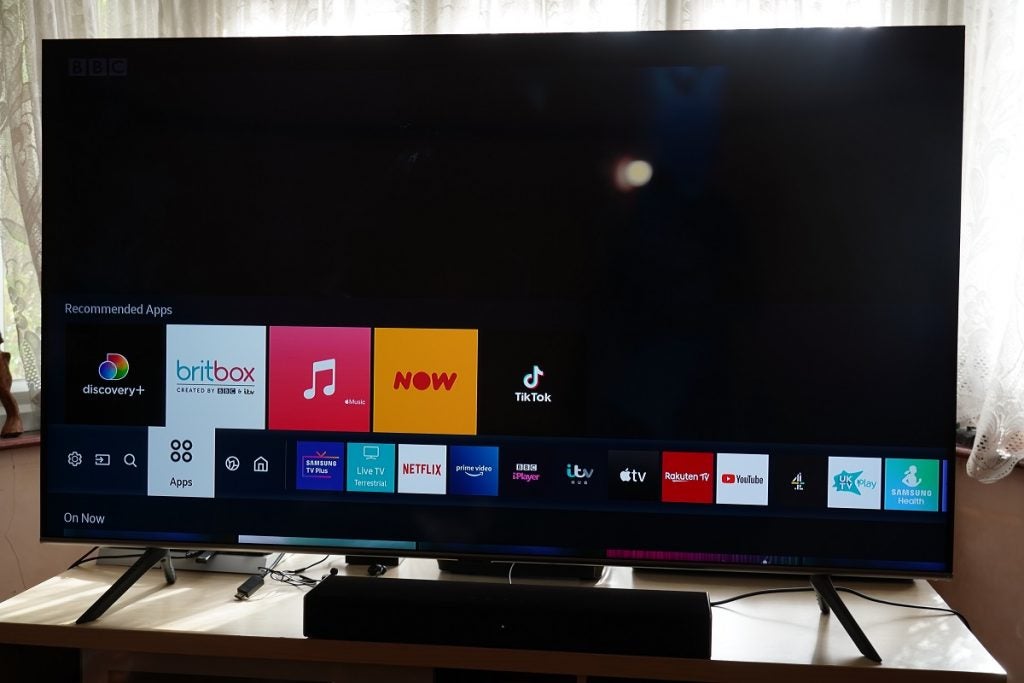 There’s no Freeview Play – Samsung’s alternative is its TV Plus service and, as we’ve repeatedly banged on with Samsung sets, the interface is easy to get to grips with.

Other smarts include Multi View, which splits the screen for viewing multiple sources at once – I’ve never quite figured out how to bring it up or get rid of it. Alexa, Bixby and Google Assistant are built-in, if you want to chat to the TV.

The SmartThings app offers another method of operating the TV, and is especially useful for setup. Integration with other smart home devices is possible through the app, with Philips Hue one of many supported. Ambient Mode brings up screensavers (or your own pictures), giving the set a more lived-in, lifestyle feel. 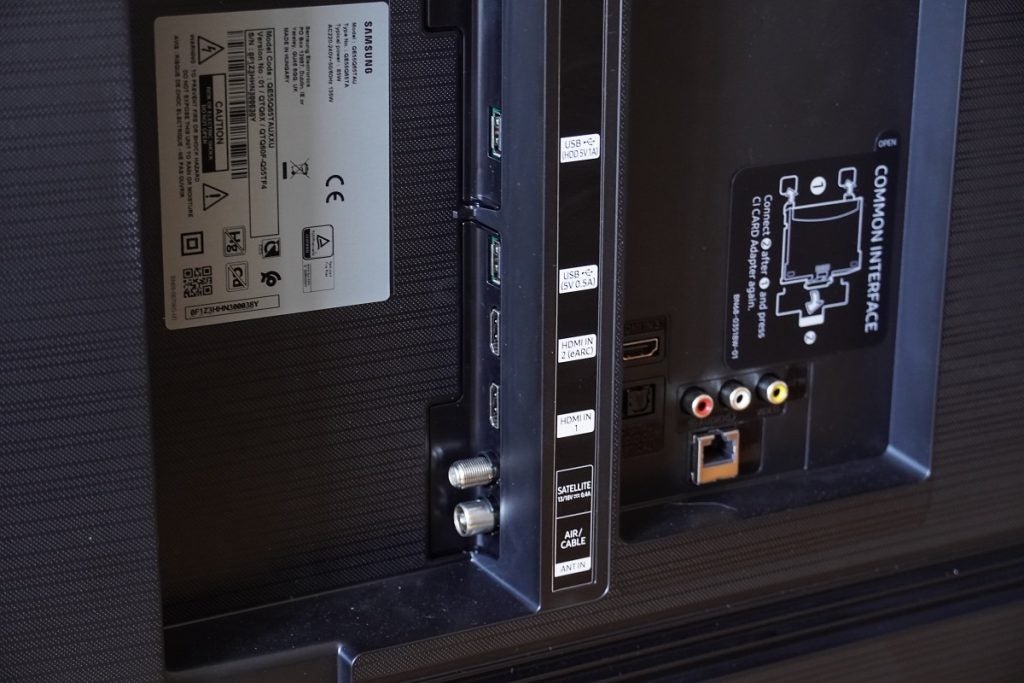 The step-up Q70T gets four HDMI inputs, including a dedicated HDMI 2.1 port that the Q65T/Q60T lacks. The Q65T does get eARC for passthrough of high-quality soundtracks such as Dolby Atmos, as well as ALLM (Auto Low Latency Mode) for putting the TV into its most receptive state for game consoles/PC.

As a gaming set, the QE55Q65T shows impressive speeds. With Game mode on, I recorded latency at 9ms (1080p/60Hz), which is class-leading in the TV market. There’s Game mode Auto, which irons out any wrinkles in the image and adds motion blur, although that drives latency to 25.1ms. 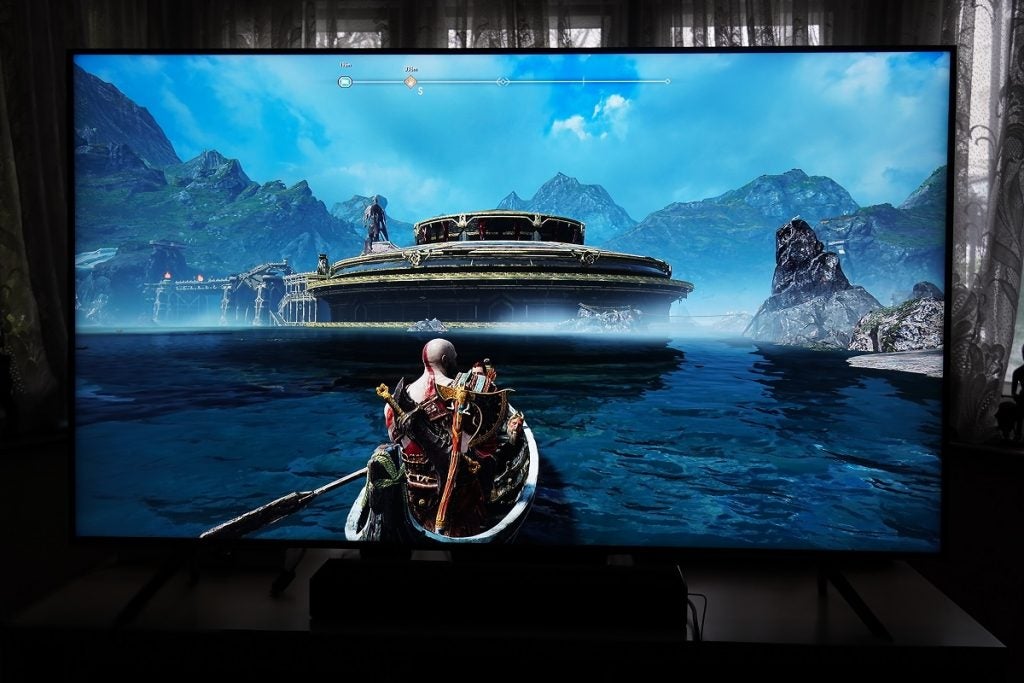 The Q65T doesn’t support VRR (Variable Refresh Rate), so it can’t adjust its refresh rate to match a game’s frame rate for a smoother response. That also means no AMD FreeSync and none of Samsung’s TVs are Nvidia G-Sync certified.

The Q65T / Q60T doesn’t match the performance of the premium Samsung QLEDs, but that’s not surprising. It carries an edge-lit panel, which means the local dimming system is arrayed around the TV’s frame instead of uniformly across the panel. This has disadvantages that I’ll get to later.

The QE55Q65T also loses AI upscaling by having the Quantum Processor Lite engine. There’s also no anti-glare technology, which is important if you’re in a bright room with plenty of light reflecting onto the screen.

So, how is the image quality? Pretty good, bordering on very good. Compared to its Q60R predecessor, colours in Avengers: Infinity War were brighter than I remembered, and with a wider range and more expressive look to the picture. I suspect this is down to the Samsung Q65T’s Dual LED technology, which combines warm and cool LED backlights to enhance contrast and colours. It certainly makes for a more attractive viewing. 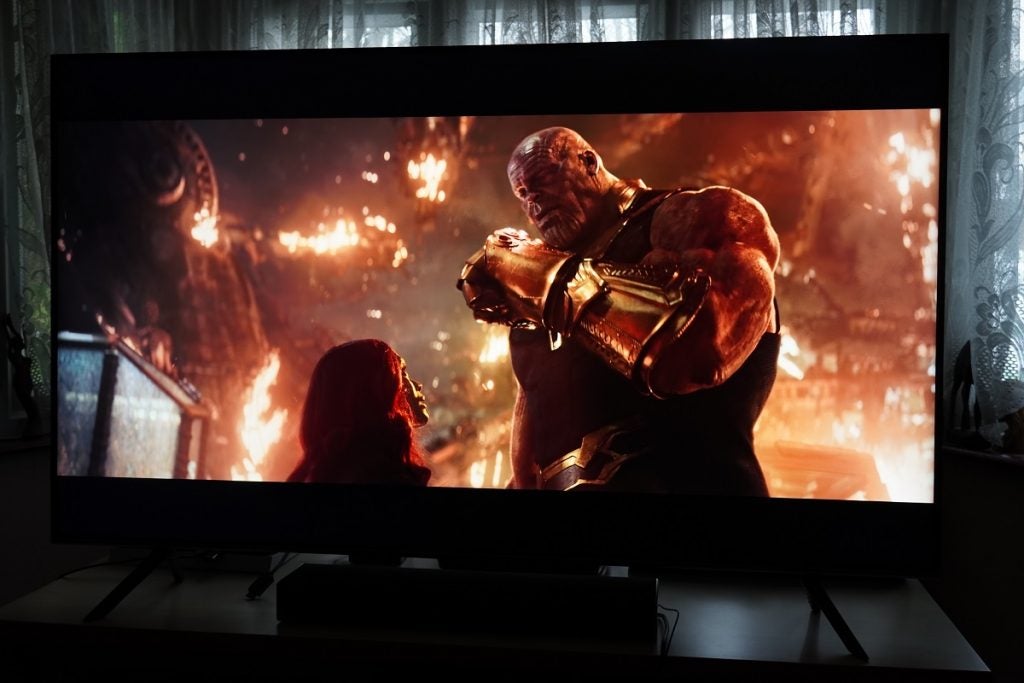 HDR support includes HDR10, HDR10+ and HLG broadcast, and performance is like the TCL 55C715K QLED in that it deals better with smaller details and highlights than it does bigger, brighter objects. The difference is the Q65T’s VA panel offers better black levels for contrast. 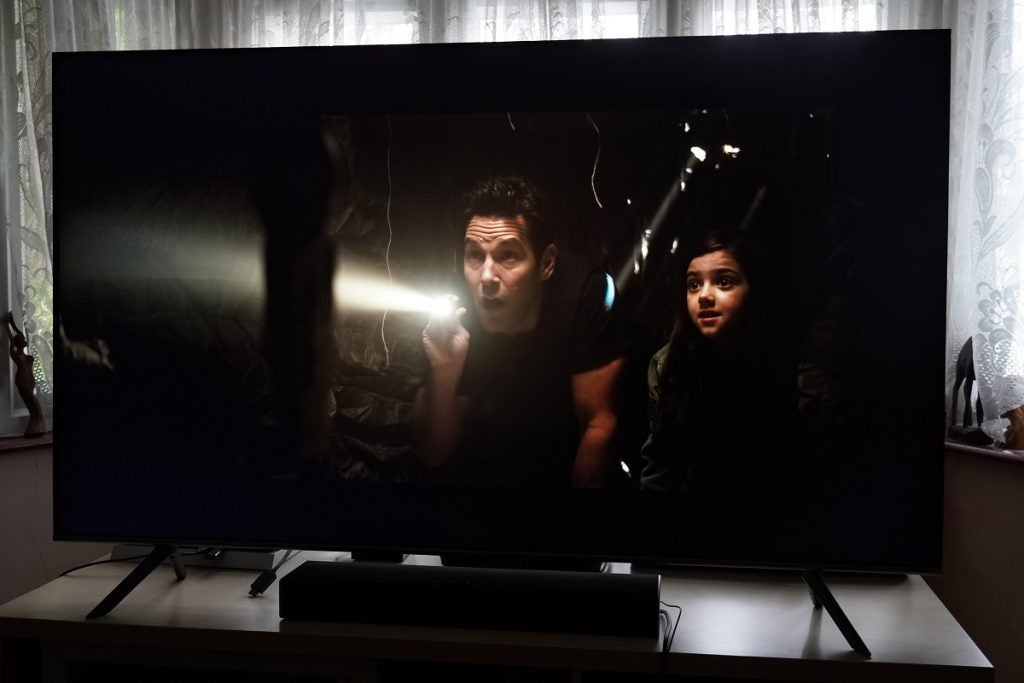 It still lacks the brightness for a punchier HDR performance, although that can be slightly alleviated with the Contrast Enhancer. It uses algorithms to determine the bright and dark parts of an image and expands the contrast between them. I settled on the Low setting, since that kept black levels in shape without removing too much detail – although it’s worth tweaking, depending on the film. The best effect is had with brighter scenes. 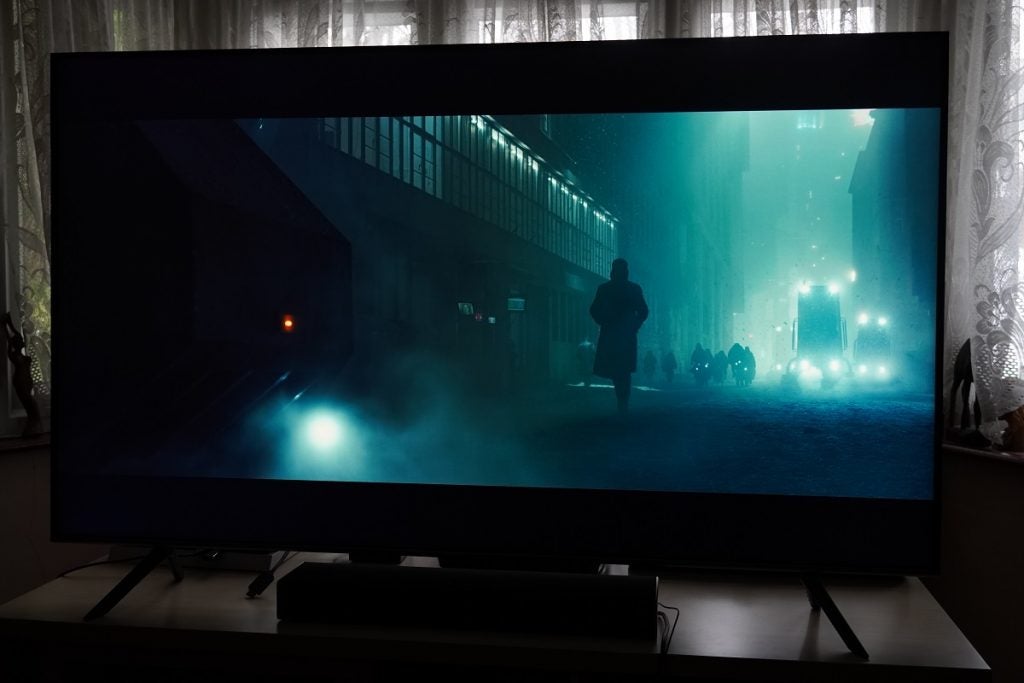 The HLG HDR performance for His Dark Materials on iPlayer was dim at first. The lack of anti-glare means ambient light can wash it out at times, but the Q65T has a secret weapon. Brightness of HLG content can be tweaked for improved contrast. 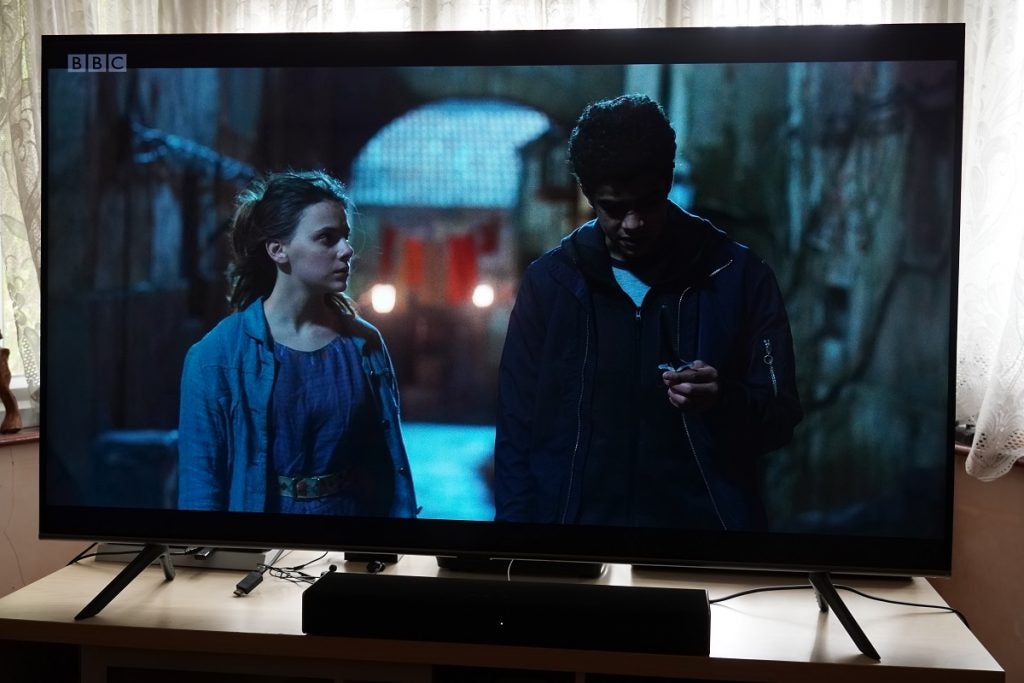 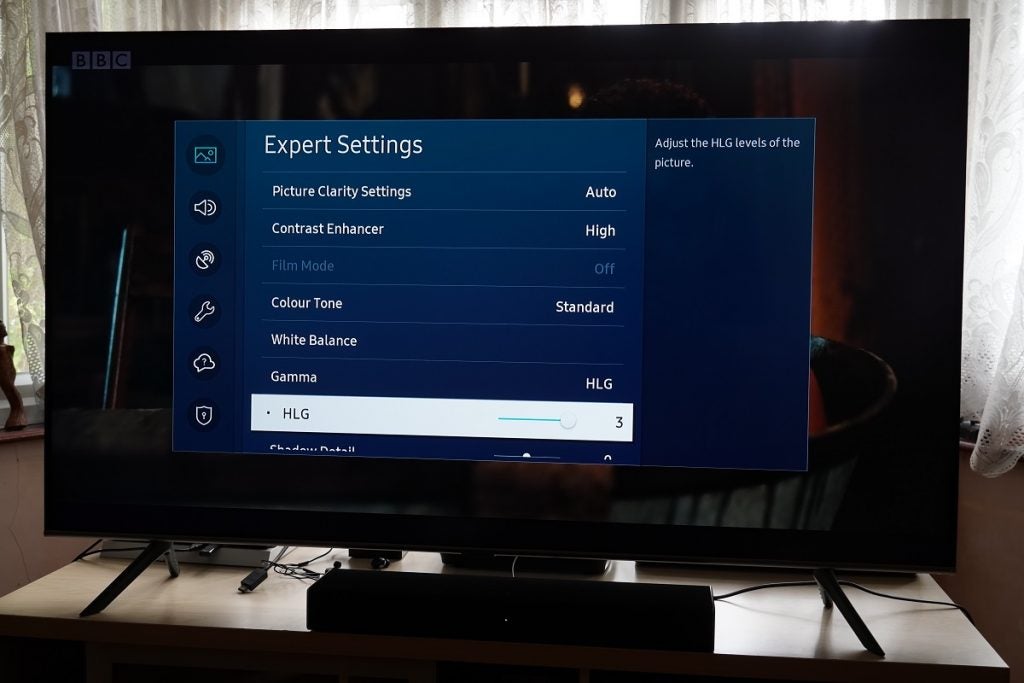 Its HDR10+ performance is more convincing than the TCL, too. Bad Times at the El Royale offers a wide colour range and deeper blacks, while streaming The Aeronauts on Prime Video offered some majestic-looking blue hues and excellent detail. 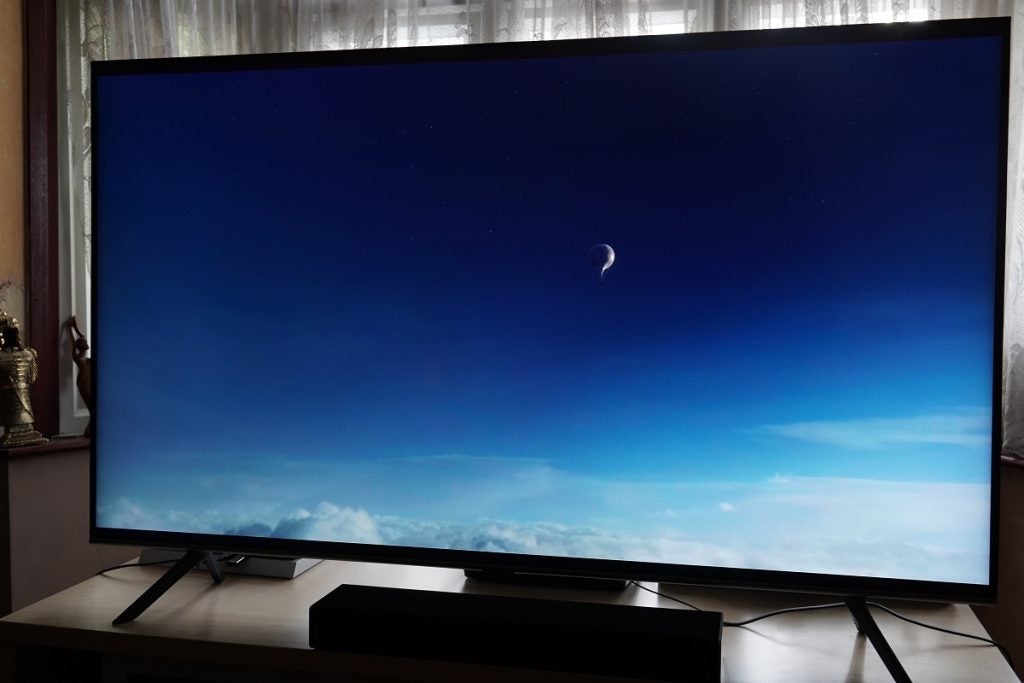 Off-axis viewing angles are better than expected, but black levels inevitably drop. There’s some backlight clouding in the corners, too, but the QE55Q65T mitigates it better than the 55C715K.

That’s not to say black levels are uniform. There’s a slight grey tone that results in a washed-out look. When Vision encounters Agnes at the edge of town in Wandavision, the lack of depth in the blacks of the night-time sky is visible to see. 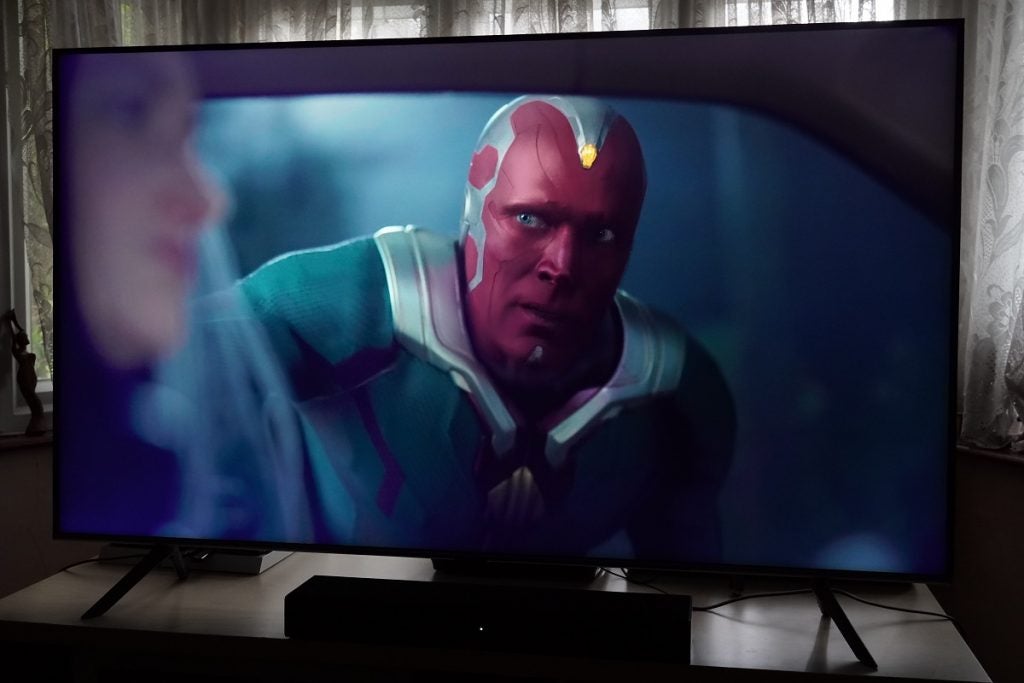 Picture modes include Filmmaker Mode, Natural, Standard, Movie and Dynamic. Natural offers the deepest blacks and bumps up the contrast. Standard, ironically, offers the most natural colours, while Dynamic bumps up the intensity but not in a garish way. Natural and Standard are your best bets for regular viewing, with the former suited to sports. Movie mode is the most accurate and the better choice out of it and Filmmaker Mode. 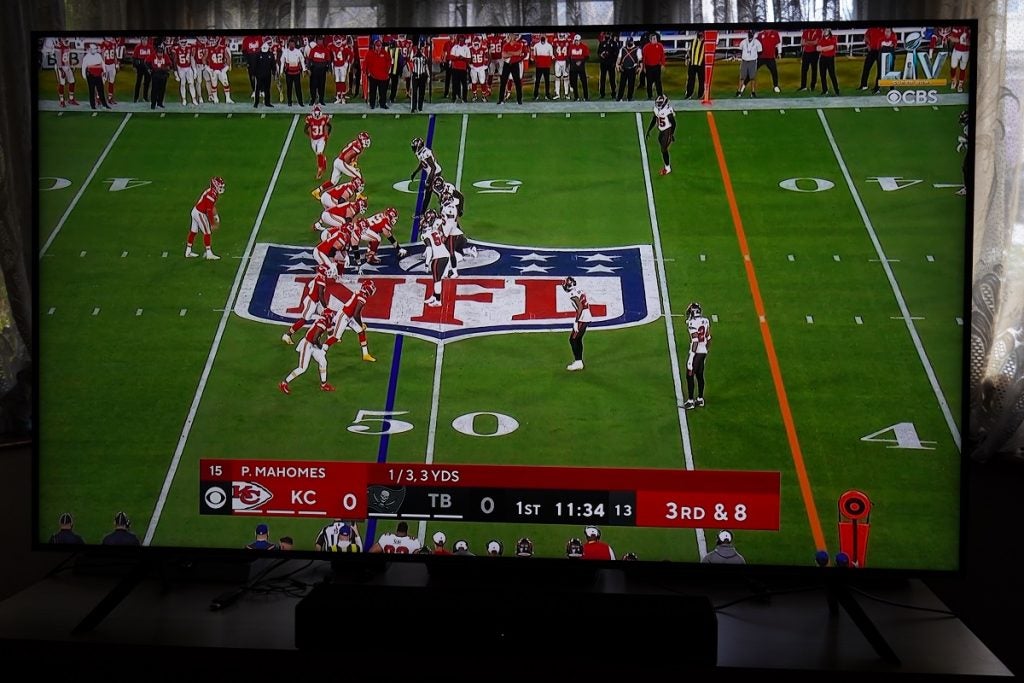 A drop to HD resolution and the lack of AI is most noticeable in the smooth complexions of faces. Upscaling still manages to impress with sharply drawn images, clarity and detail, as well as expressive colours.

With SD SDR content, there’s the inevitable loss of detail in a DVD of The Fellowship of the Ring. It’s softer and lacks sharpness, but I’m still impressed by the performance the Q65T can wring out. Colours look accurate, and detail levels make for a watchable experience. 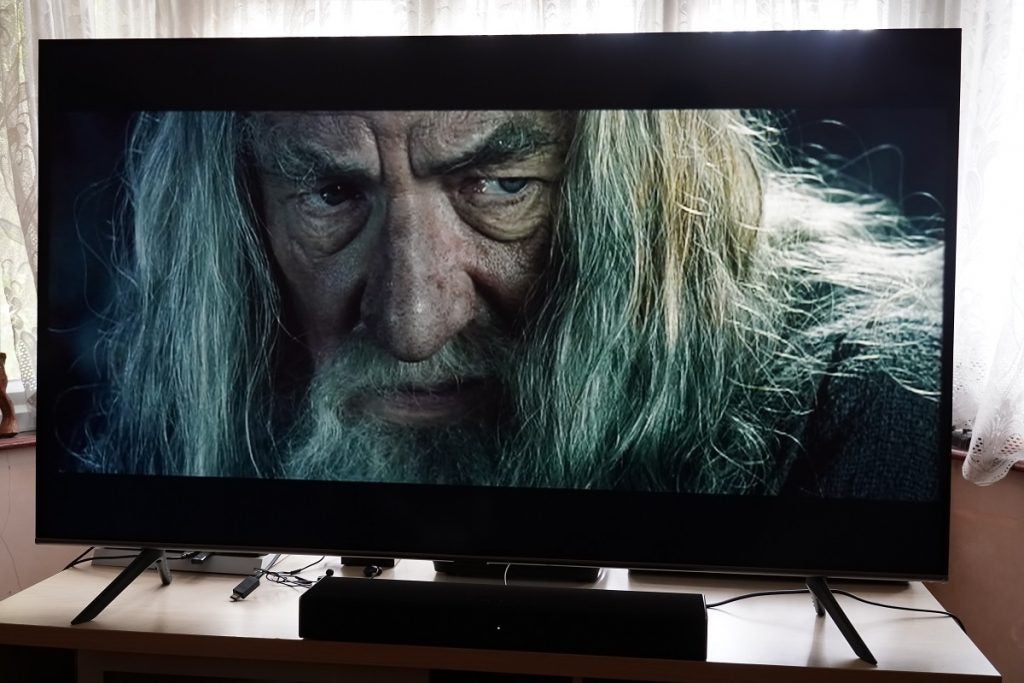 Motion is neither here nor there. I could never get it to the point where there wasn’t a little stutter or judder. If you choose the custom option, I’d suggest keeping it low; with the Lumerian Star sequence in Captain America: The Winter Soldier, higher Judder settings introduced blur with fast movement.

Sound quality – Not so pretty

There’s less to say about the Samsung Q65T’s sound. There is Samsung’s Adaptive Sound, but it isn’t allowed much room to play given the set’s 20W speaker system has a rather reined sense of dynamism.

Dialogue is rather flat, as is the whole soundstage. The Amplify mode supercharges things with more beefiness and power in the opera siege of Tenet, and it does so without succumbing to distortion either.

There’s no Object Tracking Sound (OTS) support if paired with a compatible Q-Symphony soundbar. A soundbar would elevate matters, and you can view our recommendations on our best soundbar list.

Considering the price, features and performance, the Q65T is one of the better affordable TVs out there. You could quibble about its lack of top-tier features, but I don’t think the audience for this TV will be too bothered. With a pleasing 4K image, performance is about as good as you can get at this price, although you’ll want to pair it with a soundbar.

You should buy the Samsung QE55Q65T if…

You should not buy the Samsung QE55Q65T if…