The QE49Q70R displays expressive 4K pictures that offer excellent clarity. Upscaling is super-effective and the Q70R has enough brightness to present HDR images closer to the way they were intended. Despite a price drop, the Q70R remains an expensive proposition next to the Panasonic TX-50GX800B – but it offers brighter picture performance of which the latter is capable.

The Q70R occupies the space between the Q60R and Q80R in Samsung’s 2019 TV lineup. With full-array local dimming, Wide Angle Viewing and availability in sizes from 49-to 82in, the Q70R could be the Goldilocks of the QLED range – good features at reasonable sizes. Plus, in light of recent price cuts, it’s more affordable than at launch.

Having given the 55in Q70R the thumbs up, how well does the 49in version fare?

Samsung QE49Q70R build and design – Pretty much identical to the Q60R

In terms of design, the QE49Q70R has more in common with the Q60R than the step-up models. The central pedestal of the Q80R and above has been replaced by feet, both of which can be slotted into the underside of the TV without any screws. It’s brilliantly efficient and avoids the rigmarole that comes with assembling a stand. 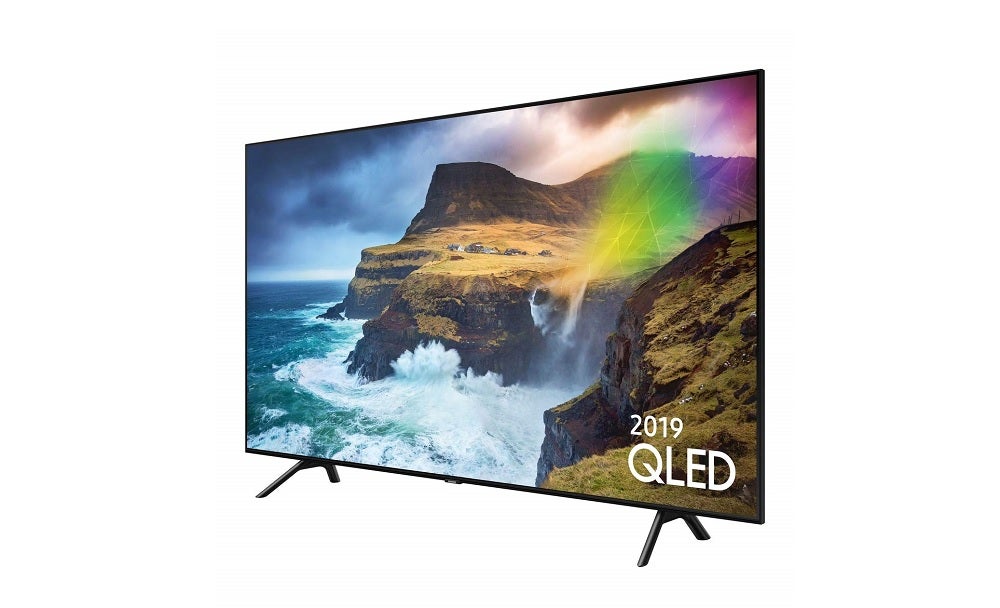 The downside is the positioning of the feet could pose problems for smaller racks. That’s unlikely to be an issue at this size, but it could be for the bigger models.

Otherwise, the Q70R has the same robust and unspectacular design language seen across the QLED range. The chamfered edges add a more rounded look to the back panel, while the bezel is nicely thin around the sides. The clearance under the TV allows space for slotting in the HW-Q70R soundbar, should that be of interest. 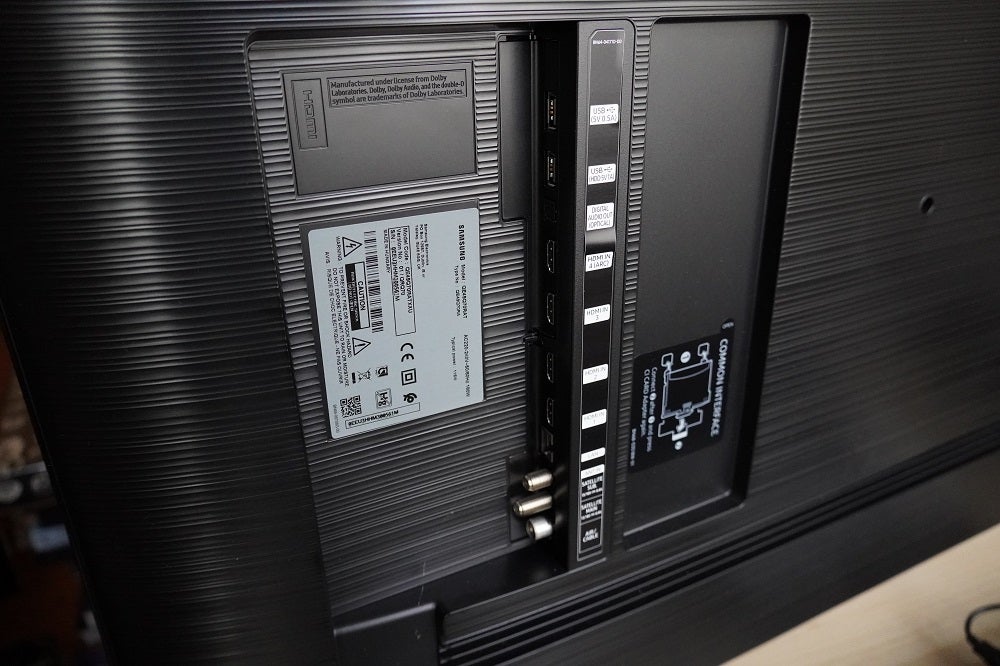 Like the Q60R, the No-Gap wall-mount solution and OneConnect box aren’t included. And despite being a mid-range effort, the Q70R includes a good helping of inputs including four HDMI (one ARC), two USB ports and a digital optical out.

There’s also Ethernet and built-in Wi-Fi, as well as Bluetooth, a Common Interface slot and antenna for satellite and aerial connections.

What makes the Q70R series an interesting proposition are the features it carries over from premium sets in the range.

It isn’t as potent in these areas to be sure – the QE49Q70R’s full-array local dimming (FALD) panel only has 50 dimmable zones, but having a VA full-array panel puts it ahead of the Q60R’s VA edge-lit solution.

The 4K Quantum processor brings along its AI skills for enhanced picture and audio. Samsung’s Eden smart platform offers plenty of apps and a degree of customisation, and while it’s susceptible to moments when it can’t remember the device connected, it’s a slick performer. 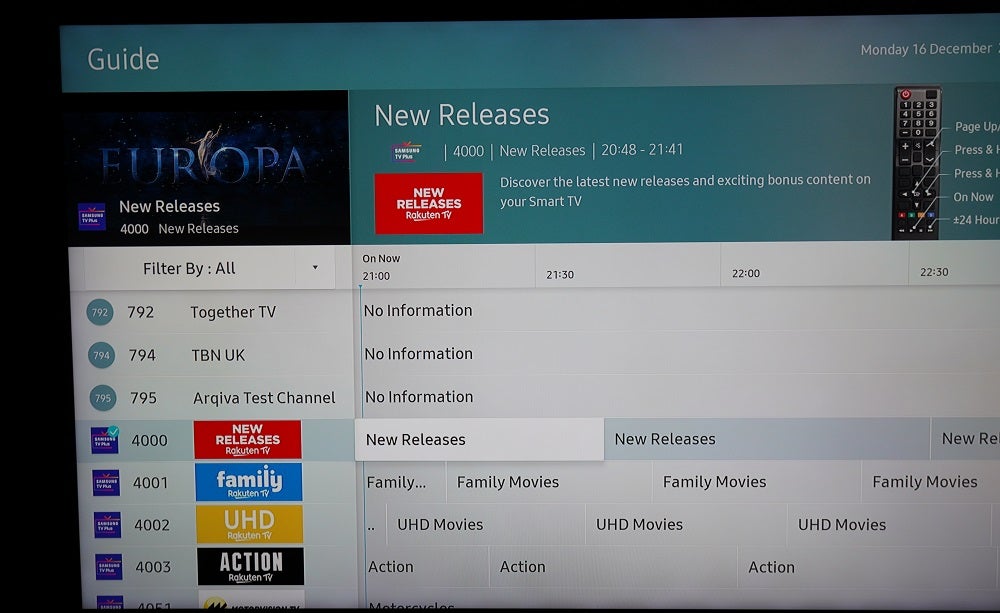 I remain unimpressed by Samsung’s decision to lock a number of apps – including NOW TV – behind a sign-up for a Samsung account. If you’re happy with the usual cadre of apps (Netflix, Prime Video, iPlayer) then this won’t be of much bother. If you aren’t, then it’s annoying to have them fenced off behind an account.

BT Sport and Apple TV remain exclusive to Samsung TVs, buffing up the company’s extensive range of apps (as long as you open up that Samsung account). 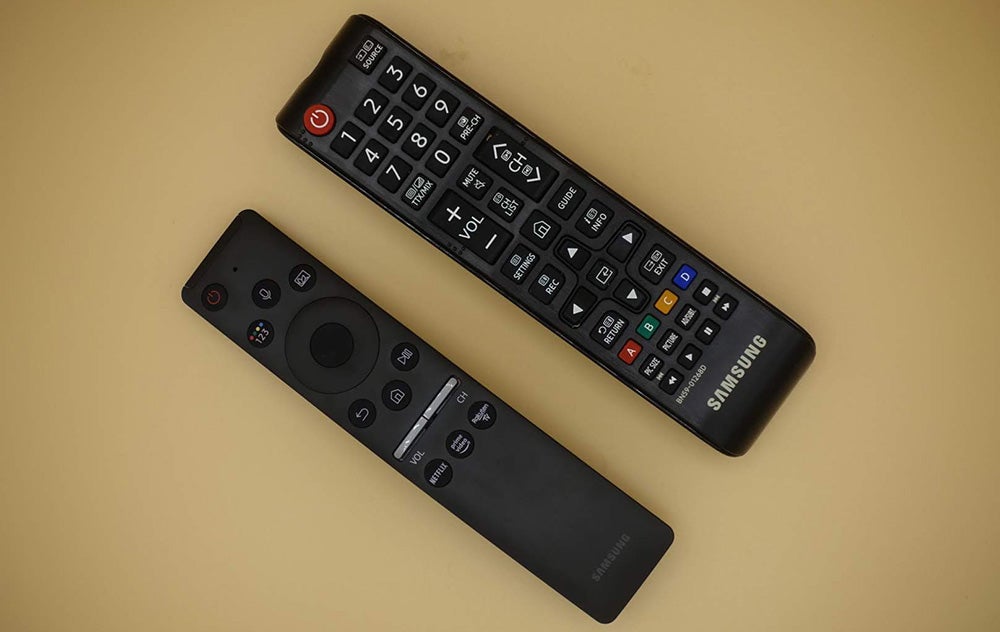 As is usual with Samsung’s QLED offering, you’re served by two remotes: one smart and the other not-so smart. The former includes a built-in microphone for the Bixby voice assistant and buttons for Netflix, Prime Video and Rakuten TV. The Q70R also works with Google Assistant, if you have an additional speaker that supports the voice assistant.

Latency for gaming was recorded at 10.8ms, continuing Samsung’s excellent performance in that area and making itself a great option for gamers who require rapid response.

At the risk of repeating ourselves with Samsung’s QLED range, the Q70R produces a confident-looking image with plenty of detail, clarity, expressive colours and a firm black performance.

What puts the Q70R above the Q60R isn’t just the presence of FALD, but the higher peak brightness of the set. Topping out around 1000 nits, this gives the Q70R enough headroom to present HDR content as it should be, alongside brightened up SD and HD images for an impressively clear image.

The Korean brand’s QLEDs support HDR10, HLG and HDR10+, with no room for Dolby Vision. The lack of support for Dolby Vision remains a source of annoyance, especially since Netflix and Apple TV Plus support it, with Disney Plus arriving in the UK next year. 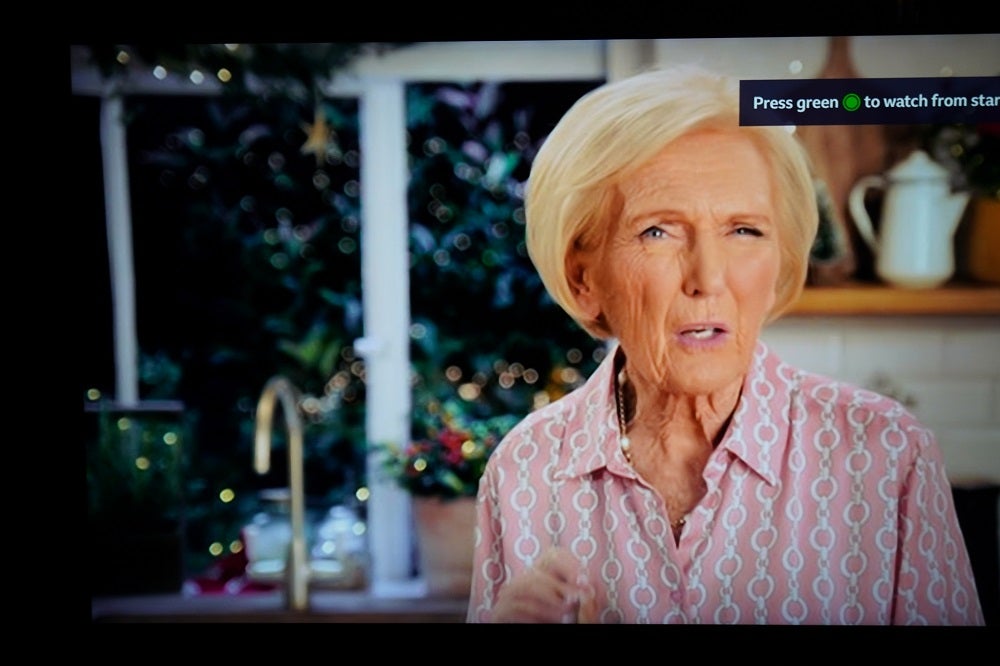 We start with a HD stream of The Fugitive on Netflix. The first real task is the establishing shots of Chicago during the film’s opening. There’s perceptible film grain during the night scenes, and while this could present an issue in terms of noise, the image is composed and never gets to the point that it becomes distracting.

The upscaling prowess of the Q70R is, yet again, top-notch. Despite The Fugitive being 26 years old, this is only a giveaway on viewing the dated fashion styles in the movie. Get close enough to the screen and you’ll see some rough edges, but you’d have to be standing right next to it. 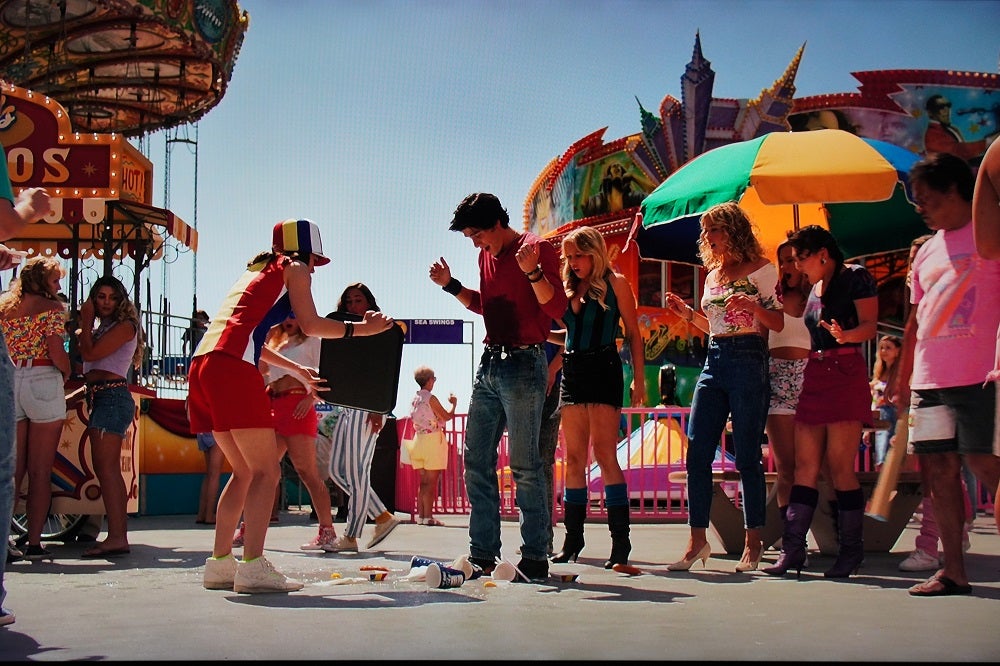 Colours are always strong and well expressed on the QE49Q70R

Watching Liverpool vs Watford on BT Sport, the picture is solid, with the reproduction of the green of grass and colours of the kit well conveyed. Even with motion control settings off, the picture holds up well as the camera pans to keep up with the action. Tweak the settings, though, and it becomes just a smidge more composed.

Next up is Captain Marvel on 4K Blu-ray, which with its many dark scenes seems like a good testbed for black levels, local dimming and peak brightness. 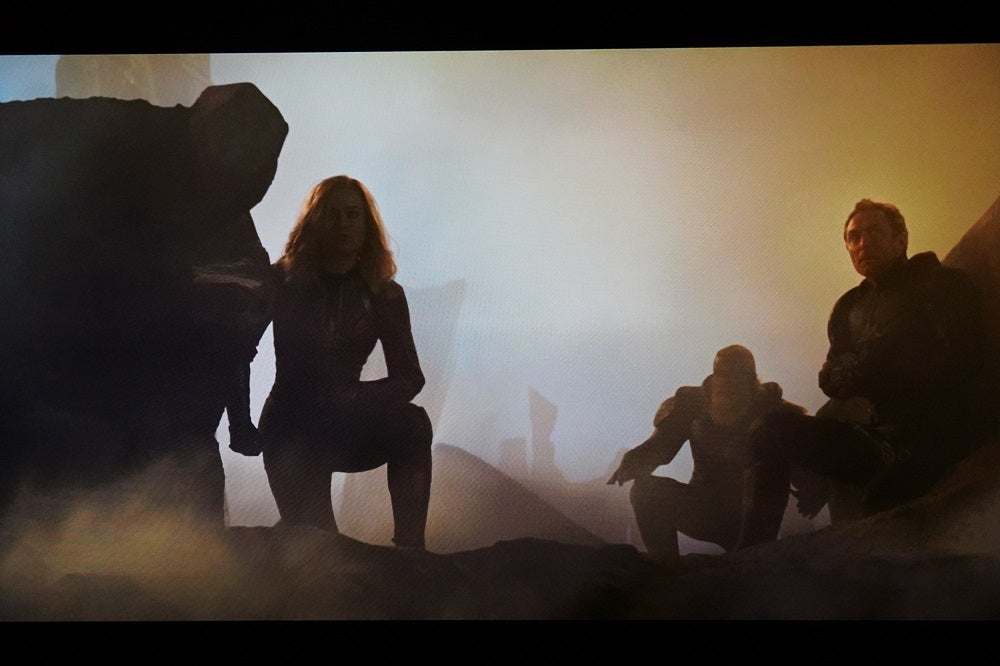 Despite a number of scenes in Captain Marvel feeling as if they’re underlit, the Samsung still manages to pick out detail

When fed bright images the QE49Q70R works a treat with naturalistic colours and a clean, precise look. It isn’t as bright as the Q80R or Q85R, but it’s bright enough to deal with the HDR content you throw its way. Local dimming is responsive, with just a slight delay in moments where a bright image transitions to a dark one, but this isn’t hugely noticeable.

The Q70R’s VA panel ensures that black levels are strong, and during some of Captain Marvel’s more underlit scenes, the QE49Q70R can mine detail from the murky scenes and separate the bright and darker areas well. The Q70R misses the Ultra Black Elite filter seen on the Q80R and upwards, which means that while reflections aren’t particularly troubling during the day, with the lights on at night it can make darker scenes more difficult to watch.

The Q70R also trades the ultra Wide Angle Viewing technology for the Wide version, and that leads to a slight loss of colour intensity when viewed off-axis.

I could repeat what I’ve already said in the Q60R review since the Q70R’s sound quality is pretty similar, if not exactly the same. It’s limited in terms of bass, as the thinness of flatscreen sets has impacted on audio quality. Samsung’s own HW-Q70R is an option, but it costs almost as much as the TV itself.

Otherwise, the Q70R offers a good amount of detail, clarity with dialogue – and even when the scenes get busy, such as quick transformations of transformers in Bumblebee, it doesn’t turn into a mush of audio. There’s also a sense of depth to the sound, and while there’s no real sense of stereo imaging, it can be a spacious listen and it’s dynamically decent – although, again, there’s that lack of bass to consider.

Should I buy the Samsung QE49Q70R?

The Samsung QE49Q70R continues the Korean manufacturer’s excellent year with its QLED TVs. Performance has been consistent across all of its QLED series and the QE49Q70R doesn’t disappoint. The picture is expressive, full of detail and with plenty of clarity. Upscaling, again, is very effective and the Q70R displays enough brightness to present HDR images closer to their intention. The lack of Dolby Vision mitigates this, and while there’s HDR10+, there still remain insufficient sources to take advantage of it.

Really, the only issue with the Q70R remains its price. Despite losing £200 off its RRP since September, its closest rivals are still cheaper.

Panasonic has two options in the TX-50GX800B and TX-50GX700B. Of the two, the GX800B is the better choice. It supports HDR10+ and Dolby Vision, although it isn’t as bright as the Q70R. It supports Freeview Play as well (Samsung has its own TV Plus), Dolby Atmos audio and a polished picture quality. It sells for £599 – a whole £300 cheaper than the Q70R.