Samsung has officially unveiled its latest TVs. To say it’s kicked off CES 2017 in Las Vegas with a bang would be an understatement of epic proportions.

On display were three models, the Q9F (flat), the Q8C (curved) and the Q7 that comes in both flat and curved options. All three looked nothing short of spectacular, but we’re going to focus here on the flagship Q9F.

Samsung Q9F – What is QLED?

Before trying to describe first impressions in more detail, it’s worth exploring what’s going on inside these new Samsung TVs.

First, Samsung is definitely switching from the ‘SUHD’ tag it currently gives its premium TVs, in favour of a new QLED designation. The Q in QLED refers to a new standard of Quantum Dot screen design, where wrapping the QDs in a new metal alloy has enabled Samsung to unlock brightness, colour and even viewing-angle possibilities well beyond the capabilities of any previous QD solution we’ve seen.

So, for instance, the 65Q9F is apparently capable of hitting brightness peaks of around 2000 nits – a huge increase on the 1400 nits delivered by Samsung’s KS9500 TVs in 2016. Samsung is also now claiming that its QLED TVs can cover essentially 100% of the DCI colour gamut used by essentially all current Ultra HD Blu-rays.

The new Quantum Dot structure has also enabled Samsung to completely redesign the the Q9F’s LCD panel so that the Quantum Dots no longer have to be illuminated by backlights firing in just one direction. Now they can be hit by lights from multiple angles, with the happy result that the viewing angle before colour and contrast take a hit is greatly increased. 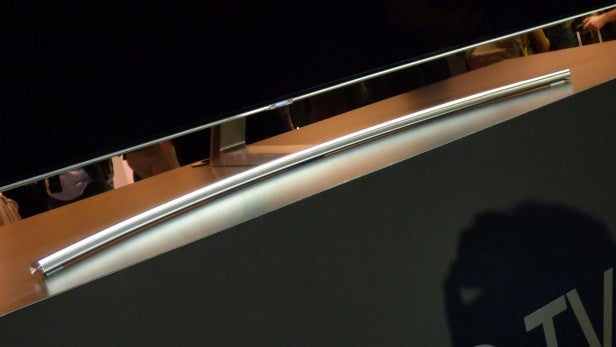 The Q9F gets off to a strong start with its engagingly subtle, well-built bodywork. Curiously, this flagship features a flat screen instead of a curved one. Samsung does like its curved flagship TVs, but the company has acknowledged that people generally prefer flat ones. The Samsung Q9F that we’re talking about was hanging from the ceiling on a wall mount that Samsung says should only take minutes to install.

Not keen on fancy wall/ceiling mounting? There’s the ‘Studio’ stand, which looks like an easel for paintings. There’s also the ‘Gravity’ stand, a curious cone-shaped thing that lets you swivel the TV. If that doesn’t float your boat, there’s also a more traditional bar-shaped stand, similar to what you’d find on Samsung’s 2015 models.

It’s nice to see such choice – much better than the endless parade of Klingon Bat’leth (massive metal arc) stands we’ve come to expect from TV manufacturers these days. Samsung says it wants to give consumers the choice.

If you’re expecting a shot of the connections panel, prepare to be disappointed. The Q9F has a very clean back, just like the current flagship, the UE65KS9500. The reason for this is that Samsung tends to keep its connections separate, so you don’t have a nest of cables going into your TV. The KS9500’s connections box features four HDMI 2.0 ports, all certified HDCP 2.2 – we’re certain the Q9F will have no less than that. 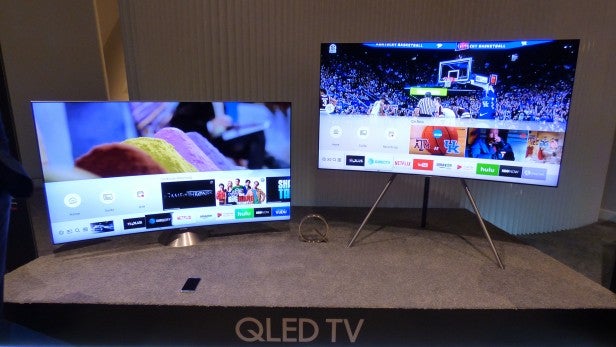 It’s a struggle to even notice the bodywork once you clap eyes on the picture quality Samsung is bringing to the table this year. Thanks to the astonishing brightness and colour Samsung’s latest TVs deliver, you pretty much forget everything else in the room, too.

While we’re used to only being able to watch Samsung TVs from around 30 degrees off axis, before various picture quality issues come into play, the Q9F lets you walk in a near 180-degree arc without the image degrading. In fact, where colour consistency is concerned the Q9F actually outperforms 2016’s LG OLEDs. We really didn’t expect to ever be comparing an LCD TV’s viewing angle favourably to an OLED’s.

The Q9F’s most dazzling abilities are its contrast and its colour. Where contrast is concerned, the demo set on show simultaneously managed to hit the brightest whites and colours we’ve seen from any TV (including Sony’s stunning ZD9) and the deepest blacks we’ve seen on any LCD TV.

Notwithstanding the impact of the fairly bright lighting in the venue, it’s possible the Q9F will give OLED a run for its money where black level depth is concerned. It’s also possible that the raw impact of all the Q9F’s brightness sitting alongside the blacks may be exaggerating the sense of depth of those blacks. Though even if this latter possibility turns out to be true, it’s still a pretty damn attractive illusion.

The Q9F’s extra brightness also seemed with the demo material on show to completely remove any signs of HDR clipping, where bright parts of the image can lose gradation and detail. 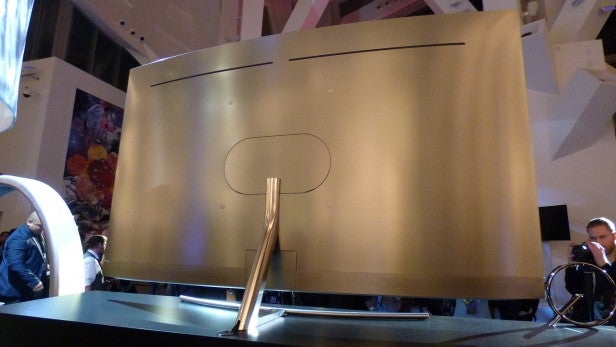 Perhaps the single most exciting thing about the Q9F is its brightness – up to 2,000 nits, we’re told – and the impact it has on colour volume. Colour volume describes the impact of different brightness levels on the appearance of colours, and while it hasn’t traditionally being measured when discussing TVs, it’s actually a key component of the way our eyes perceive colour in the real world.

All of which is a long way round of saying that the Q9F’s currently unique combination of brightness and colour range makes its pictures look simply more like real life than those of any other TV we’ve seen to date. Samsung says it’s like looking through a window, and for once this sort of hyperbole doesn’t sound too far-fetched.

While the Q9F’s frankly astounding pictures dominated the discussion at its first big unveiling, it’s worth adding that from the admittedly limited demo material available to us at the launch event, it also seems to have a more powerful sound system than might have been expected from such a slim-looking TV.

Samsung wouldn’t be drawn on likely prices for the Q9F, but the company did tell TrustedReviews that we can expect these TVs to start shipping around March 2017. Naturally, we’ll bring you a full review just as soon as we can. 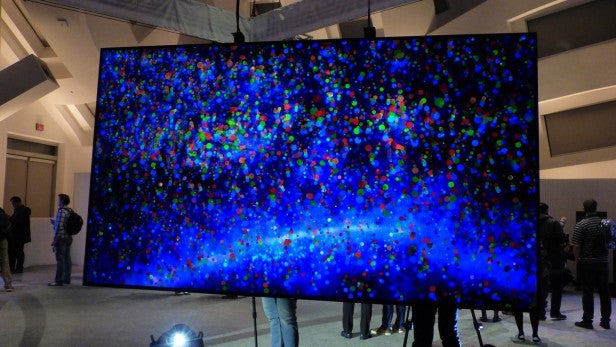 Samsung had a very successful 2016, but it’s clear the company didn’t take a break to rest on its laurels, as the jump in design and performance is simply astounding, even if our demo was brief. This is now our most-anticipated TV of 2017, so we can’t wait to get the final model in for review.

By Ced Yuen and John Archer