Calling a 15.6-inch laptop ‘thin and light’ is a stretch by our estimation, but the Samsung Q530 certainly claims as much. In fairness its 2.4kg weight is low for such a machine, but we suppose ‘slightly lighter than you expect’ isn’t quite as catchy a tagline.

Setting such cynicism aside, however, the Q530 – which has the excellent Q330 for a stable mate – still retains all the qualities we typically expect of Samsung laptops. While not a design triumph, it’s solidly put together and offers a decent spec for the £750 asking price. 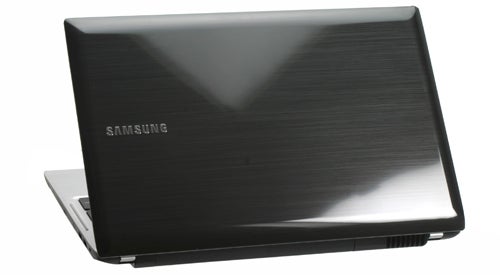 At the heart of things is the 2.26GHz Intel Core i3 processor. It’s supported by an ample 4GB DDR3 RAM (including 64-bit Windows 7), a capacious 500GB hard drive, and a 1GB Nvidia 330M graphics card that should be up for a little gaming action. Also included is 802.11n Wi-Fi and Bluetooth 3.0, though wired networking is of the slower 10/100 Mbit variety.


Unlike the company’s R-series of laptops, the Q530 has a fairly demure exterior. Its lid is clad in semi-gloss, semi-textured dark grey, while the innards are dominated by matt silver plastic. Not design to set pulses racing, then, but the Q530 won’t suffer mucky fingerprints or scratches as readily as its peers.

While the physical connectivity covers the basics okay, the Q530 does lack in a few departments. There’s no eSATA for instance, and only three USB ports despite the ample space for a fourth. That said, with HDMI and VGA on-board, the Q530 should suffice for most users. A memory card reader is conveniently placed on the front edge, and naturally there are two dedicated audio jacks as well.

If you’re buying a 15.6-inch laptop it’s likely you’ll want to do a fair amount of typing, and the Q530 should suit anyone well. It keys, which are of the isolated variety, have nice positive actions, and the layout hides no gremlins. There’s also a numeric keypad should you need it, a feature that’s become increasingly common on this size of laptop.

Unfortunately things are hampered slightly by the positioning of the touchpad. Because it’s slightly to the right of the spacebar, as opposed to directly below it, when typing you’ll occasionally find you jog the mouse cursor. It’s an irritating trait, and one that can cause errors when typing. There are ways around the issue, such as deactivating the pad when typing or adjusting the sensitivity settings, but the better solution is to put it in the right place in the first place. Samsung have been guilty of this several times of late, hopefully it will hear the message!


Aside from its placement, the touchpad is very good. Its buttons offer good feedback and the surface of the touchpad glides nicely, and supports a range of multi-touch gestures. 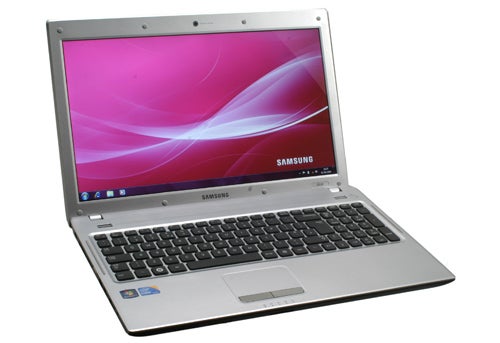 Samsung typically has better than average displays on its laptops, and the Q530 is no exception. Viewing angles are still nothing special, but sat in the sweet spot the 1,366 x 768 resolution display generates good detail in videos and photos and punchy colours. If there’s a complaint then a higher resolution would be nice, but that’s an accusation that can be levelled at 90 per cent of laptops. 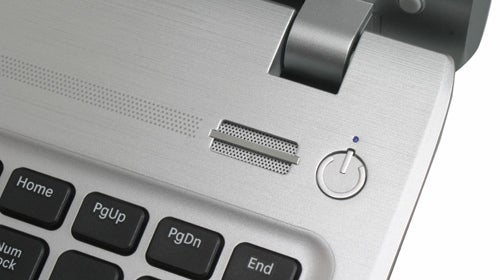 Regrettably, Samsung doesn’t furnish equal attention to the speakers on its laptops. The Q530 is fairly typical of Samsung’s, producing passable audio from its stereo speakers but not much more than that. They’ll do for watching online video clips, but for music you’ll want some speakers or a set of headphones.

In general, laptops have more processing power than most people need, and the Intel Core i3 in the Q530 (clocked at 2.26GHz) will provide ample performance for most users’ needs. Image editing and normal multi-tasking should pose no problems, and HD video editing and encoding is possible too if you don’t mind waiting a little while.


All this said, for the money, there is better performance to be had. Ironically such competition comes from the Samsung R590 (review coming soon), which for the same money has a 2.4GHz Intel Core i5 processor. Not only is it faster at stock speeds, it also features Intel’s ‘Turbo Boost’ technology, which dynamically adjusts the CPU’s performance depending on the load. 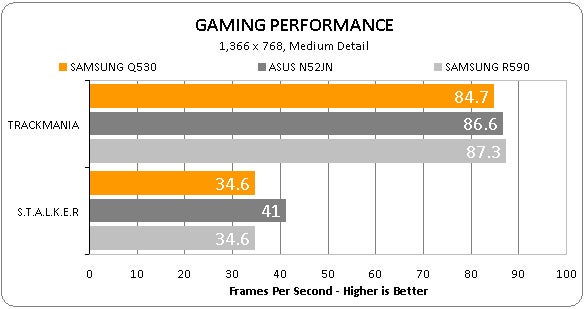 Little difference exists in games, however, and the Q530 is a capable performer in this department. It certainly had no problems with our low-intensity TrackMania Nations test, and it produced playable frame rates at medium detail settings in the more demanding STALKER: Call of Pripyat. In the latest titles compromise on settings will be needed, but the likes of World Warcraft and EVE Online should pose few problems, and many older titles will look great.


As Samsung talks up the relative portability of the Q530, we hoped to see better than average battery life. In reality there’s nothing special about the Q530’s longevity, but it passed the three hour mark in our testing and this is good enough for most requirements. It also has a noticeable advantage over the R590 in this test, which may prove significant if choosing between them.

In our eyes, however, considering the two are priced near identically, the Q530 doesn’t compare well. Not only is the R590 faster, it has better connectivity (eSATA and ExpressCard are included) and a more stylish appearance. Some may prefer the more durable design of the Q530, and it’s still a solid, perfectly usable machine, but it doesn’t shine in any particular department.


A solid, dependable and durable laptop, the Q530 will do everything you ask of it, but there are better deals to be had.