Once upon a time truly portable laptops were something of a luxury, but that scenario seems a distant memory these days. Where once people marvelled at the £2,000 and wafer thin Sony VAIO VGN-X505VP, we now have a massive range of both expensive and affordable portable notebooks to choose from. On one end of the scale you have the Asus Eee PC 900 and its trailing army of impersonators, while Sony has the acclaimed TZ Series (see: Sony VAIO VGN-TZ31MN) and Lenovo the ThinkPad X300 – oh, and there’s the Apple MacBook Air, though it’s something of a dirty word around these parts! 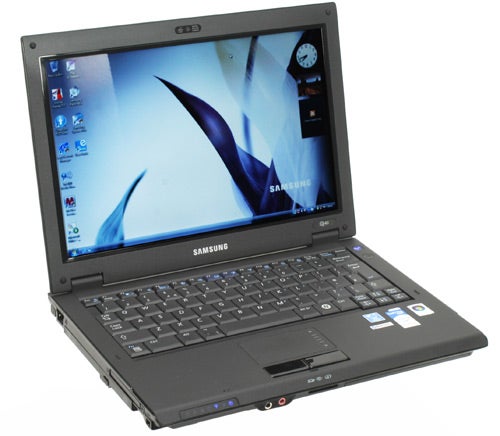 Yet, though all these are compelling options, they’re all subject to certain limitations of processing power and/or expense that may make them unsuitable for some. This is where the likes of the Samsung Q45 come in, offering regular mobile parts inside a perfectly portable chassis and at a far more affordable price point.


Of course, the Samsung Q45 isn’t a new model by any means and I reviewed it back in June last year; however, a few things have changed since then. It can now be found in a new and cheaper £570 configuration (model number: NP-Q45A00A/SUK), while there’s a great deal more competition out there from the likes of the Dell XPS M1330 and the Toshiba Satellite U300. Both are slightly larger 13.3in notebooks, but with both weighing in at 2kg or under, they offer keen competition.

It probably doesn’t help, then, that the Q45 is starting to show its age. Though Samsung found time to update the external look, the underlying chassis is still practically identical to the Samsung Q35 that we first saw all the way back in 2006. This isn’t a total disaster, but its relative age is exposed in the way some ports don’t feel quite as well integrated as on other notebooks, while you still get a PC Card slot instead of the now more common ExpressCard. There are also only two USB ports, though this isn’t a sin unique to the Q45.


In addition, though the Samsung R700 I looked at recently was quite slim given its size, the Q45 is on chunky side for this form factor. Thankfully, it’s still relatively light, weighing an eminently portable 1.86kg with its 6-cell battery and though I’ve been critical of a few little things, it’s still an essentially good looking notebook thanks to its uncomplicated glossy lid and black internals. 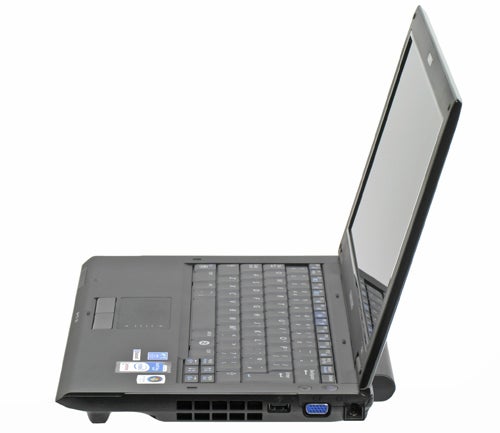 Elsewhere everything is very much as you’d expect. There’s a 12.1in glossy and reflective screen with a 1,280 x 800 resolution and it’s a relatively good one, with sharp text and decent colour production, though there’s some minor backlight bleed and viewing angles aren’t a strong point. Neither, for that matter, are the speakers that are housed underneath the notebook, though this is less of any issue on a small notebook like this than it was on the R700.

Directing proceedings is an Intel Core 2 Duo T5450 clocked at 1.66GHz, with 2MB L2 Cache and a 667MHz Front Side Bus. Supported by 2GB of 667MHz DRR2 and Intel GMA X3100 integrated graphics this Q45 is no speed demon but it is very frugal, managing just over four hours in the Mobile Mark 2007 Productivity test and nearly five in the lower intensity Reader test. With wireless enabled you can probably expect between three and four hours and though our usual DVD playback test didn’t complete, you should be able to watch a film of around two hours with some power to spare. 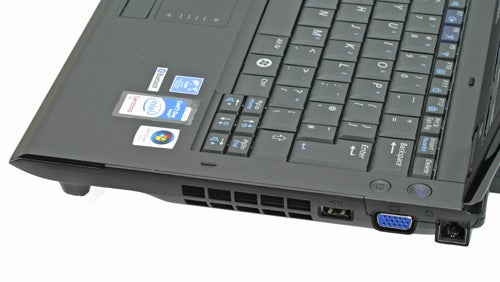 As for raw performance, it’ll do everything short of truly intensive tasks like batch image editing and video rendering in decent time. This makes it perfectly suited to a student who wants a capable all-rounder that’s portable and can be used for long periods unplugged. To use a cricketing analogy – hey it’s almost summer – it’s more Paul Collingwood than Andrew Flintoff, never explosive but always reliable and not one to turn up drunk and floundering in shallow water.


In this spirit of solid dependability this Q45 has everything you really need, without offering anything outstanding. A 250GB 5400rpm SATA HDD is ample, while Intel 802.11b/g wireless, 10/100 Ethernet and Bluetooth 2.0 + EDR means you’ll never be lacking for network or wireless access. Likewise, connectivity is limited but lacking nothing essential, with D-SUB (VGA) for an external monitor, audio inputs and outputs, a memory card reader and FireWire. There’s also a 1.3 Megapixel webcam; always a welcome inclusion. 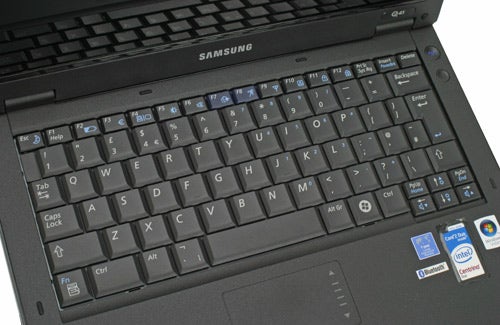 Samsung keyboards are generally something of a Jekyll and Hyde affair. On the positive side, most of the layout is really quite good and keys are firm, responsive and feature a nice degree of travel. On the flip side, Samsung still insists on placing the Fn key to the left of the Ctrl key, something myself and rest of the TR team are determined to eradicate. For the most part, though, the Q45 delivers an above average typing experience.


So, the only question remains is whether the Samsung Q45 remains as good a proposition as it did last year? Competition is fiercer now, but even so the Q45 still offers the right mix of features (not the most advanced) at a superb price. If you have more budget or prefer the 13.3in form factor then I’d still happily recommend both the Dell XPS M1330 or Toshiba Satellite U300 respectively, but the hundred grams or so less weight and smaller footprint of the Q45 still count for a lot.


Despite the slightly ageing chassis the Samsung Q45 is still a superb portable laptop at the price, especially for the student. Battery performance is very impressive and though you won’t be throwing games or intensive processing tasks at it, it’ll tackle most typical computing activities comfortably. Thus, if you want portability at the right price and an Asus Eee PC 900 doesn’t offer the performance you need, this is still worth serious consideration. 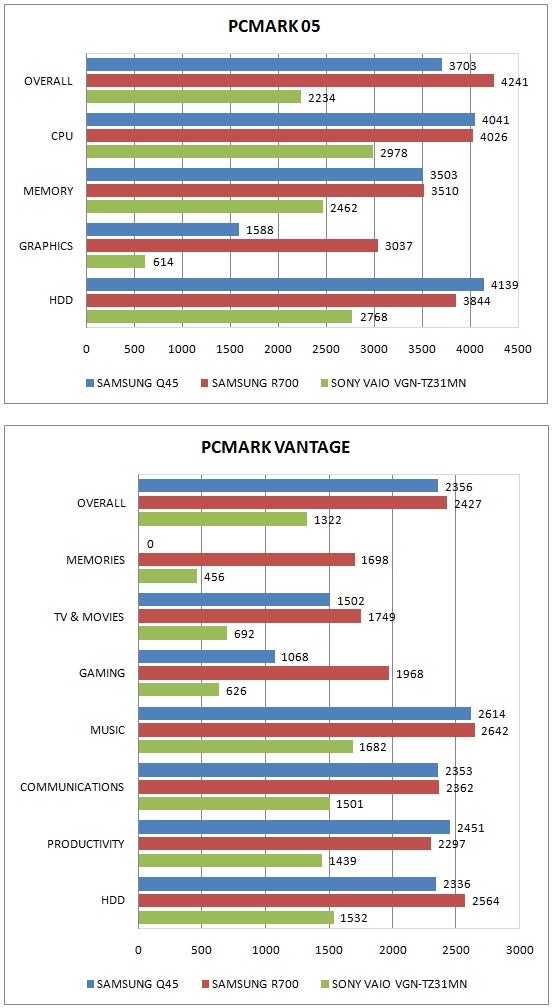 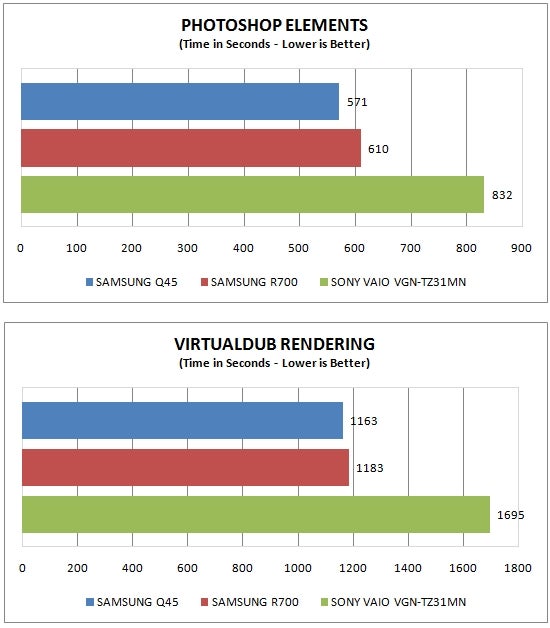 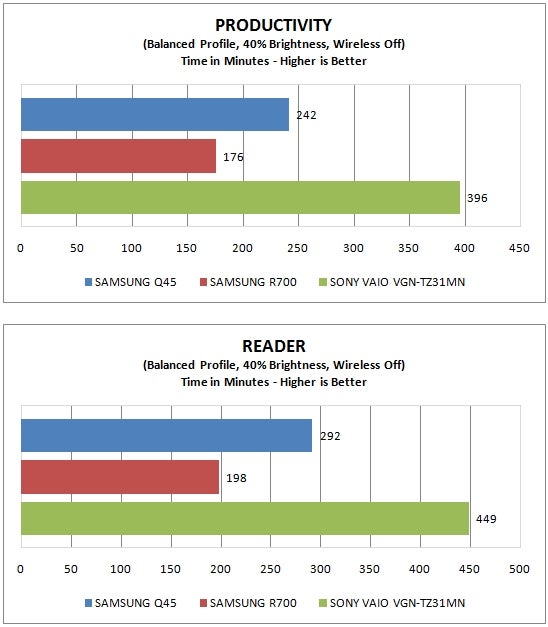