The ultra-portable market is one that has come under increasing threat from netbooks like the Asus Eee PC 901 and MSI Wind. As little as a year ago, to get a usable computer with a screen size below 13in could cost you well over £1,000. Even when the 4G Eee came out, it was essentially in a different market class, with its small screen, poor specifications and tiny amount of storage.


However, the more expensive Eee PC 1000 is encroaching further onto ultra-portable territory. This model, sporting a 10in screen, near full size keyboard and, in the H model at least, 80GB hard drive, is blurring the boundary between small notebooks and netbooks. So is there still sufficient reason to get a heavier and bulkier notebook? Well, quite apart from things like a LightScribe optical drive, Samsung makes a very convincing argument with its updated H001 HSDPA Q45, which is absolutely stuffed with features. 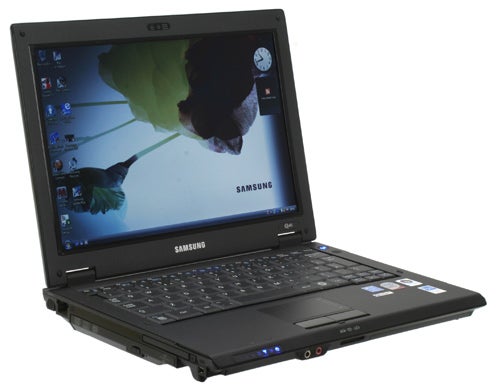 Now regular readers might realise we’ve already reviewed the Samsung Q45 back in 2007, and the Q45 T5450 just a few months ago. But while the H001 model I’m looking at today is physically still identical, there have been a few updates stuffed under the hood. Instead of its predecessor’s Intel Core 2 Duo T5450 1.66GHz CPU, there’s now a speedy 2.4GHz T8300, and wireless has been upgraded from 802.11b/g to draft-n. Perhaps the biggest upgrade is integrated HSDPA (High-Speed Downlink Packet Access, also known as Mobile Broadband), with network operators like Vodafone already offering 7.2mbps download speeds in major cities and airports. This basically brings high-end ADSL broadband speed within reach the of the mobile consumer, and is great for streaming video (among other things). 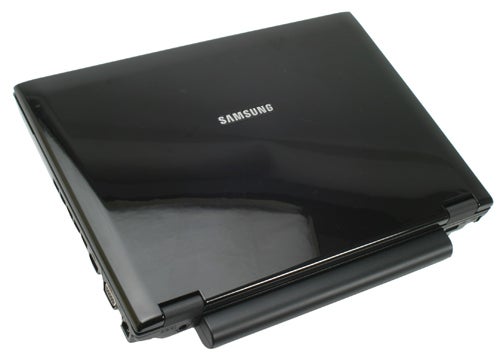 But for those of you who are new to the Q45 party, let’s get started on how this little laptop looks. Samsung has a fairly consistent design across many of its notebook models: a glossy black lid and matte grey or black interior, base and keyboard (unlike the shiny disaster on the Toshiba Satellite A300 177). Like most glossy lids, it is very eye-catching, and like most, after a while this can be for all the wrong reasons: it’s a fingerprint and dust magnet, not to mention that any scratches or scrapes will show up really well. A good thing, then, that Samsung provides a nice little cleaning cloth.

The only sign of glossiness when you open the notebook up are the shiny integrated 1.3-megapixel camera, glossy screen and touchpad buttons, which are finished in the same mirror-like black as the top of the lid. The rest of the interior is an attractive matte black, which extends from the bezel to the keyboard and touchpad. Apart from a small range of easily removable coloured stickers on the right palm rest, it makes for a minimalist look that’s businesslike yet pleasantly stylish. It’s actually somewhat reminiscent of the recently reviewed Dell 1310, which is certainly no bad thing.

Unfortunately, I can’t praise the Q45’s keyboard as wholeheartedly. It’s not particularly bad, but neither is it a huge step up from HP’s 2133 Mini-Note PC. And MSI’s example in its 12.1in PR210 Notebook is much better, with more travel and a more defined response. The MSI also manages to fit the Home, PgUp, PgDn and End keys along the side like with most 15.4in laptops, rather than having PgUp and PgDn double as Home and End as on the Q45. What’s most annoying is that MSI has squeezed this larger and more comfortable keyboard in a chassis that is exactly as wide. 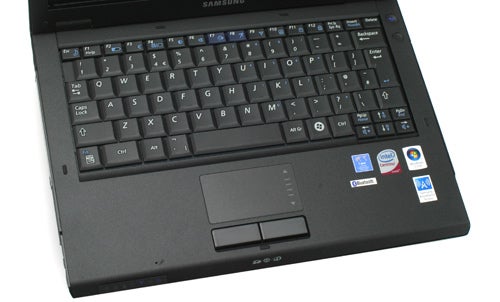 Both manufacturers still insist on the faux-pas of having the Fn key in the place where Ctrl is supposed to be, but I’ve resigned myself to this irregularity, since some people even prefer it. The one good thing about the Q45’s mediocre response and travel is that the careful typist can be virtually silent, always handy when working beside your sleeping partner or other such scenarios.


The keyboard is not the only mildly disappointing aspect of the Q45. Though still attractive, the chassis might have been fairly cutting edge when it was first used on the Samsung Q35, but two years on, it’s more than showing its age. Two USB ports (one of which is annoyingly located at the rear), for example, are less than even the Asus Eee PC 901! And while modern ultra-portables are starting to appear with some form of digital video out (usually HDMI), the Q45 still only offers VGA. Another legacy of the outdated chassis is a PC Card Slot, rather than the newer ExpressCard.

Apart from this there is a Card Reader (MS+pro, SD, MMC+high speed and xD), a four-pin IEEE 1394 (though I would have preferred a third USB port), and of course headphone and mic sockets, located at the notebook’s front. A nice touch which we’re coming across ever more often is that the headphone jack doubles as S/PDIF, meaning you can hook this laptop up to a quality sound system when you get home after a hard day of work.


Annoyingly, the Q45 puts out most of its heat on its right side, which can be very bothersome if you are using a mouse righthanded (though it’s great on a frosty day). To be fair, it also means the DVD writer is on the left-hand side where most prefer it, and since it’s of the LightScribe variety, you can burn professional-looking labels onto compatible media.

Overall, the chassis is not as sleek or as slim as it could be either. But this is not entirely due to dated design; the notebook has several protruding legs that add thickness but at least should ensure good air-flow underneath the beastie, keeping its vital innards nice and cool. As on previous models, the six-cell battery extends out the back of the chassis.

One area where the H001 is certainly well equipped is in the wireless department. Apart from the aforementioned HSDPA, you get Bluetooth 2.0 EDR and 802.11 draft-n wireless. Like on Samsung’s previous Q40 HSDPA Notebook The HSDPA module is easily accessible by removing a small rubber flap just behind and underneath the headphone and microphone panel. However, the extra features do seem to have upped the weight just a bit, as the Q45 now weighs in at 1.92kg, although that’s only 60g heavier than its predecessors.


The 12.1in screen is again largely the same as on previous models. The narrow black glossy surround adds a nice effect, and as mentioned, the display itself is high-gloss too, meaning you can use it as a mirror when your laptop is turned off. This makes it harder to use with ambient light sources, but does add a little vibrancy to colours. Speaking of which, they’re fairly good for a laptop TFT, as is greyscale differentiation. There’s no banding on any tones, and text is never less than sharp. The positives are somewhat ruined by poor viewing angles and distractingly strong backlight bleed from the bottom of the screen, but then that’s not unusual for a display this size. 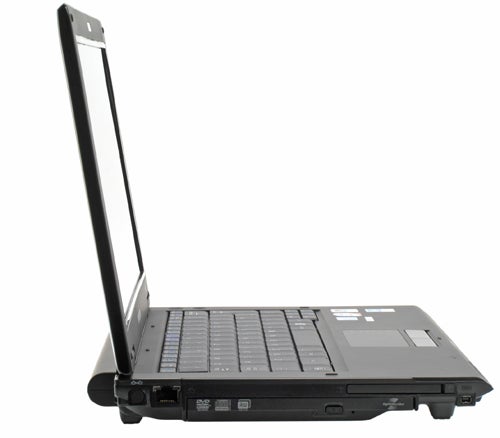 It’s slightly depressing that after the lacklustre graphics performance of the Via chip in the MSI Titan, the Intel GMA X3100 integrated graphics result of 25.2FPS under TrackMania Nations Forever (at normal quality and the screen’s native 1,280 x 800 resolution) seems positively impressive. But while the Q45 is certainly no gaming machine, it ought to be able to handle older games at low detail.


Our model came with Vista Business, though the Q45 is also available in other configurations with Home Premium and Windows XP Professional. The dual core 2.4GHz processor along with its 2GB of RAM ensures the H001 whizzes along under Vista, and most tasks are fairly snappy. Battery life is not bad either, though the Q45 is surprisingly beaten by Dell’s Vostro 1310, despite that model having identical features and battery, and using a bigger screen. 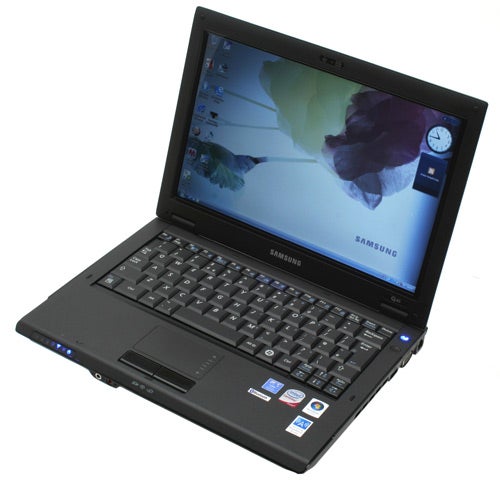 When it comes to pricing, however, the Q45 is its own worst enemy. You see, instead of the H001 model which comes in at the £918 mark, around £570 will net you the A00D version with Core 2 Duo T5450 1.66 GHz processor, a very generous 3GB of RAM and a 320GB hard drive. This gives you nearly £350 to buy an external HSDPA modem and any other upgrades, and for many users, the increased memory and storage will more than make up for the weaker processor.


The final nail in the H001’s coffin is that if you do want your HSDPA integrated, there are similarly specced and sized alternatives that are again far cheaper. An example is the Fujitsu Siemens Esprimo Mobile U9200 which offers everything the Q45 H001 does (minus 80GB of hard drive space) for close to half the price.


Overall Samsung’s updated HSDPA Q45 (H001) is a great little machine, which despite its dated chassis and other flaws is packed with features and some decent specifications. But at over £900, it simply costs too much compared to the competition or even other Q45 models, which offer good value for money. 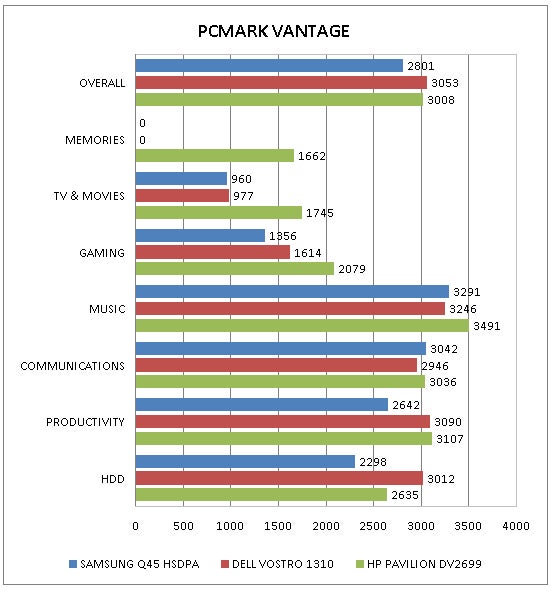 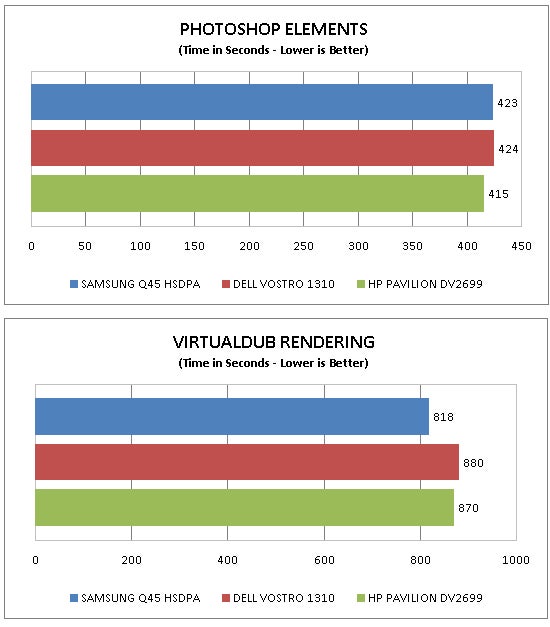 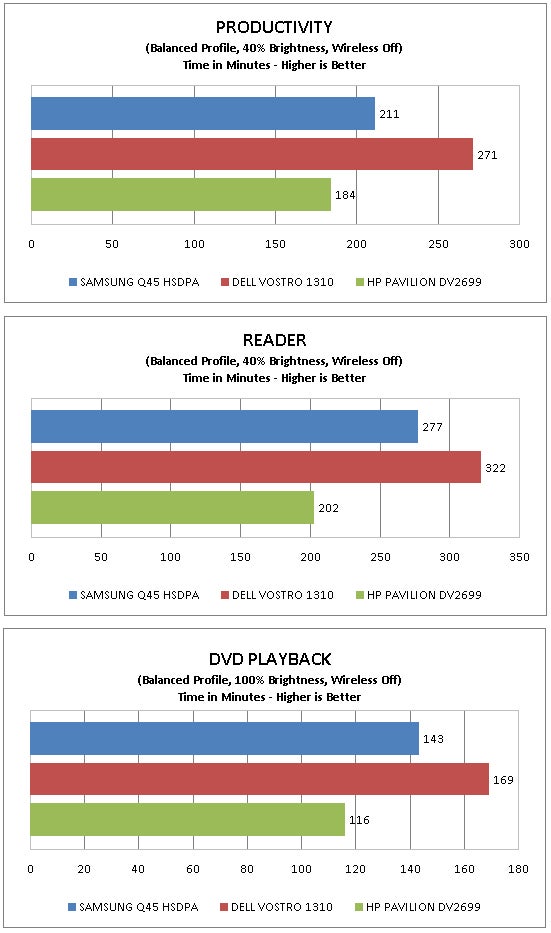