I first looked at the Samsung Q35 back in June where it grabbed itself a Recommended award. The original Q35 offered light weight, solid specification and very impressive value for money. About half a year later I’m looking at the Q35 again, but with a fair few upgrades – can Samsung make its updated Q35 as attractive today as the original was six months ago?


The most obvious difference between this Q35 and the one I reviewed before is the colour of the lid. Whereas the original machine was finished in matt silver, the lid on this model is a striking deep red colour. To be honest, I’m not generally keen on bold colour being thrown at an otherwise subtle product, but I have to say that it really works with the Q35. Perhaps it’s because it’s such a deep red, or maybe it’s the fact that the finish is so glossy, but either way the red finish definitely makes the Q35 look a bit more special. Samsung has also been smart enough to not go overboard with the colour, so it’s just the lid that’s red, with the rest of the chassis finished in matt silver and black. 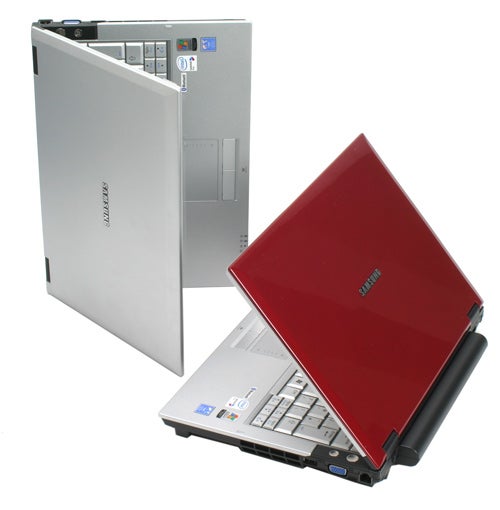 The other big change is internal, with the inclusion of a Core 2 Duo CPU rather than the Core Duo seen in the original Q35. Samsung has equipped this bright red beast with a Core 2 Duo T5600 which runs at 1.83GHz. If you want a bit more power, you could always go for the slightly less striking silver Q35 which comes equipped with a 2GHz T7200 chip. To be fair though, the 1.83GHz chip seen here will be able to handle pretty much anything you’re likely to throw at a thin and light machine like this. The CPU is backed up by 1.24GB of memory – the strange memory complement is because the Q35 has 256MB of memory hard wired to the board, then a 1GB SODIM in the expansion slot. A small amount of system memory is also eaten up by the Intel integrated graphics chipset. 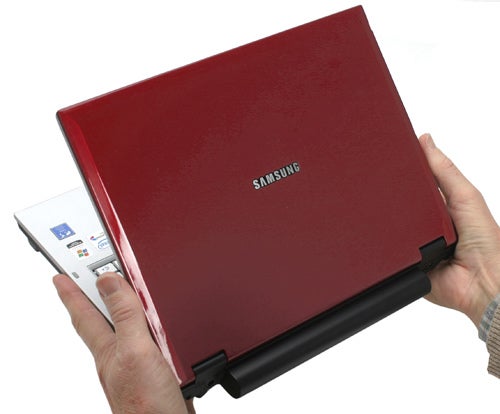 You’ve also got an 80GB hard disk, which is par for the course for a notebook this size. That said, considering that the Q35 uses a 2.5in drive, I would like to see a bit more storage on offer. Thankfully the Q35 has hard disk options from 60GB up to 120GB. Connection wise there’s a Broadcom 10/100 Ethernet adapter, an Intel PRO/Wireless 3945ABG 802.11a, b and g wireless controller, as well as integrated Bluetooth. It’s Bluetooth 2.0 with EDR too, so you could in theory stream music in stereo over Bluetooth, if you really wanted to. Oh, and there’s a 56k modem for all those old school surfers out there.

If you need to burn optical discs in your notebook the Q35 won’t disappoint, with a Super-Multi DVD writer installed. This will write to DVD+R/RW, DVD-R/RW, DVD-RAM and dual layer DVD media. Oh, and you can still burn CD-R and CD-RW discs of course. 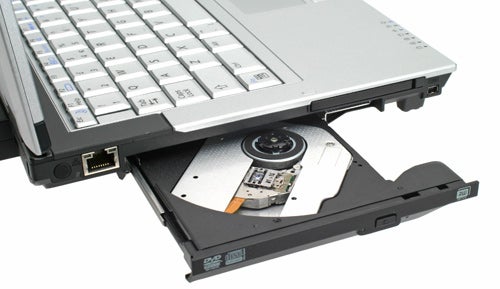 Lifting that red lid reveals a silver keyboard and wrist rest, along with a 12.1in widescreen display with a silver bezel surrounding it. The screen has a native resolution of 1,280 x 800, which is pretty standard for a 12.1in widescreen display. The screen has a high contrast glossy coating, which you either love or hate – luckily I’m in the former camp, especially if you happen to want to use the Q35 for watching movies, which I have done on several occasions. In fact, if you’re not a fan of high contrast coatings you’re in trouble, because more notebooks tend to have them than not these days. The screen is very bright and the colours are extremely vivid as I would expect – the downside is that it is fairly reflective in some lighting conditions, and the viewing angle is shallower than a not glossy screen. The latter isn’t too much of an issue though, since you’re not likely to be giving too many presentations to people on a notebook this small.


The silver keyboard doesn’t just look good, it’s also surprisingly comfortable to type on. The keys are small, but not too small to type on, even if you have large hands. The Caps Lock, Shift, Return and Backspace keys are all large, although the Tab key isn’t. Also, even though Samsung has decided to place the Fn key in the bottom left corner, where the Ctrl key should be, it has made amends by making the Ctrl key twice the normal size. There’s a decent amount of travel on offer with a solid spring back bouncing your finger up, ready for the next key strike. It’s not in the same league as the HP Compaq nc2400, but then no other thin and light notebook keyboard is. 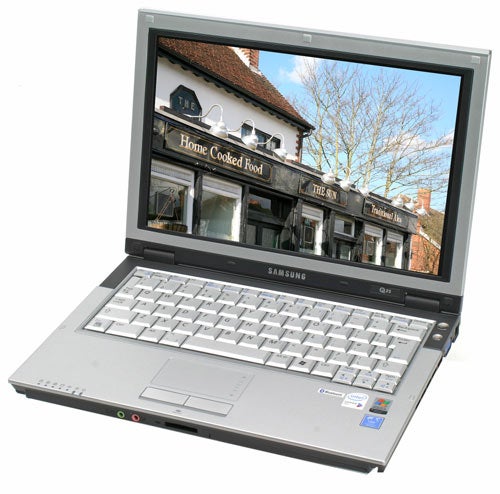 Below the Spacebar is a touchpad with a widescreen aspect ratio to match the screen. The right edge of the touchpad is marked out for scrolling vertically through web pages and documents, and even though the bottom edge isn’t marked, it will allow you to scroll horizontally too. The touchpad is very sensitive and accurate, while also being placed far enough from the Spacebar to avoid accidental cursor movement when typing. Under the touchpad are two large selector buttons finished in brushed aluminium.

To the top right of the keyboard are two round buttons – one for power and one to boot into Samsung’s AV Station multimedia application. This lets you perform basic AV duties without having to boot up into Windows. I say basic, because although you can playback music and video, the video codec support is very limited, so don’t go expecting to watch your XviD collection without having to boot into Windows first.


On the right side of the casing is modem socket, a USB 2.0 port and D-SUB port for hooking up the Q35 to an external monitor. At the front you’ll find headphone and mic sockets along with a memory card reader that accepts SD, MMC, MemoryStick, MemoryStick Pro and xD cards.

The left is pretty well stacked with a four-pin FireWire port, a PC Card slot, the DVD writer and an Ethernet port. While the rear is dominated by the battery, but also houses a second USB 2.0 port and the power socket.


Performance wise, this Q35 has considerably more grunt than the 1.66GHz Core Duo version I reviewed before, turning in a SYSmark 2002 score of 338 compared with 265. The Q35 Red also turned in a far higher PC Mark score than the older version at 3143 compared to 2816. When it comes to battery life the original Q35 produced an impressive time of 339 minutes compared to the 241 minutes on this machine. However, I should point out that I’ve become a bit more unforgiving with the backlight setting when running Mobile Mark these days, plus the new model produced a corresponding performance rating of 196 compared to 176 on the previous model. DVD playback time was almost identical with the shiny new Red Q35 managing 213 minutes compared to 212 minutes on the older machine.

When I reviewed the original Q35 I thought that it was a bit of a bargain, but this new red model is even more so. With a street price of only £917.68 including VAT, you’re getting a lot of notebook in a very small and light package at a great price. OK, there are smaller and lighter notebooks like the Sony TX3XP, but with dimensions of 299 x 214 x 35mm and a weight of 1.89kg, the Q35 Red is no porker. Also, the Sony TX3XP only uses a single core, ultra-low voltage CPU.


Samsung’s updated Q35 is just as impressive as the original. The new Core 2 Duo processor brings with it extra performance and features, while the red lid really does make it look that bit more special. If you prefer the understated silver, that option is still available as the first picture in this review shows. But best of all, Samsung isn’t expecting you to pay through the nose for its fully featured, thin and light notebook.