Today we’re looking at another entry into Samsung’s ‘Touch of Colour’ series of notebooks and having been impressed with the Q210, which won our coveted Recommended Award, the 13.3 inch Q310 has a lot to live up to. Moreover, unlike the Q210, the Q310 has some pretty stern competition from the likes of the Dell XPS M1330 and Apple’s MacBook to contend with, so it’s going to need a good performance to match both of those. 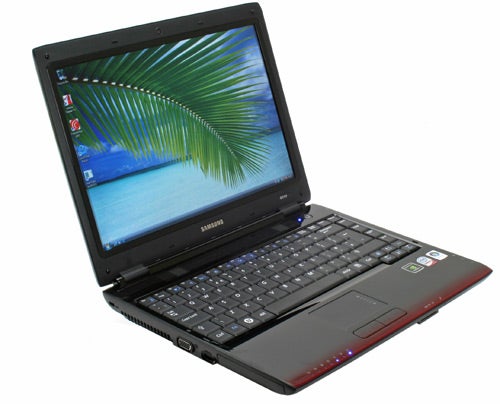 Surprisingly, Samsung claims that despite being larger than the Q210, the Q310 only weighs fifty grams more – making it 2kg compared to the 1.95kg of the Q210. However, I was a bit sceptical of this claim and indeed our weighing scale revealed the Q310 coming in at 2.15kg with its supplied six-cell battery. While this is heavier than even the Dell XPS M1330, it’s still light considering the amount of power you’re getting and is no heavier than the Toshiba’s Portégé M800, a machine that suffered from a far inferior battery too. 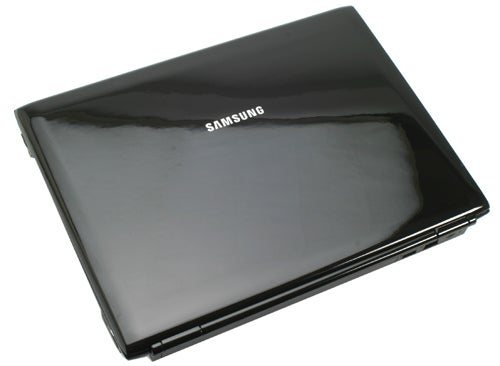 So despite the extra size, the Q310 is still pretty portable and as you might have guessed already it looks more or less exactly the same as the Q210. Indeed, from the moment you unpack the Q310, you can’t help but feel it’s a bit of a looker, regardless of your fondness or otherwise for the daub of red on the palm-rest – something that’s divided opinion in the office.


Quite apart from the coloured front, most of the machine is finished in Samsung’s trademark piano black. This includes the lid and it’s simple and sleek, with only the Samsung logo in discrete white lettering marring its clean surface. Its edges are also subtly curved, lending the machine a sleek overall appearance. Of course this kind of finish is as susceptible as ever to fingerprints and marks, but at least Samsung has included its usual soft cleaning cloth for keeping things looking tidy.

On opening it up, you’re greeted with a mixture of glossy and matte plastic. The screen bezel consists of a matte plastic outer surround and narrow inner glossy strip, an effect that creates a nice sense of contrast and frames the display rather nicely. Below the display you’ll find Samsung’s name in tasteful silver lettering and the Q310 model number in white.

Thankfully, though its surround is likewise glossy, the keyboard is matte, as is the touchpad. Its buttons, meanwhile, are shiny and located on the edge where red transitions into black. It’s worth noting, too, that you’ll see a hint of the red when the notebook is closed, thanks to the lid not fully extending over the palm rest – something that’s clearly deliberate on Samsung’s part.


In terms of connectivity, there’s nothing too special here and though everything you really need is here, there are a few issues worth noting. For instance, it’s not overly convenient having only one USB port accessible from the sides and though you do get another two at the back, it’s odd given the Q210 had all its USB ports on the sides. Moreover, the two ports at the back are quite close together, so ‘fat’ memory sticks like my Corsair Flash Voyager will end up blocking the other port. From another point of view, though, the two USB ports on the back do mean you can connect a keyboard and mouse and not have the wires hanging out of the side of the machine – something any home worker will appreciate.

FireWire probably won’t be missed by many, but my biggest regret – an issue with most Samsung notebooks – is the lack of an e-SATA port. This enables far higher transfer speeds to external storage than USB 2.0 and has become common enough on notebooks that its absence here is notable. S/PDIF, meanwhile, is another casualty of the cut-throat price, with only regular headphone and microphone jacks on offer.


Apart from this the connectivity layout is perfectly acceptable and Samsung continues its handy habit of marking the ports with tiny icons on top, so you can plug things in without having to look around the notebook’s sides. On the left are the two video inputs; HDMI and VGA, and a Kensington lock slot. At the front we find the 7-in-1 card reader, which handles MS, MS Pro, SD, SDHC, MMC, MMC plus and xD.

On the right of the Q310 reside a 34mm ExpressCard slot, microphone and headphone jacks, a LightScribe DVD Writer and the aforementioned USB port. There’s also a blocked-off modem port, so any poor soul without broadband access will need to invest in an external modem or perhaps an HSDPA modem, if 3G is more prevalent. Finally, at the back are Gigabit LAN and power jacks and the remaining two USBs, as covered previously.

As if to make up for the physical connectivity niggles, wireless is generously taken care of by Bluetooth 2.0 and Wireless-N Wi-Fi and the rest of the specifications don’t exactly leave you wanting for much either. Of course the Q310, like the Q210 before it, is based on Intel’s Centrino 2 platform, so if you opt for the Q310 you can rest assured you’re getting the very latest and best mobile technology. 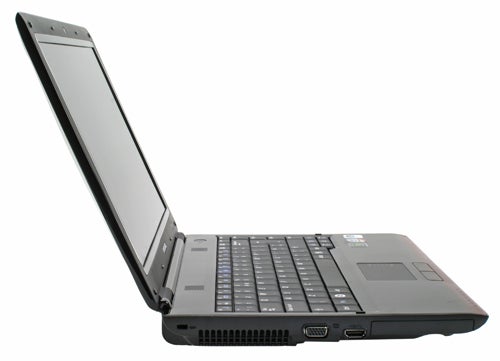 It also means this notebook features the same processor as its predecessor, namely an Intel P8400 Core 2 Duo processor running at 2.26GHz, with a low 25W thermal envelope. As we’ve seen before, this provides plenty of processing power for any task you’d want to throw at this system, easily matching most similarly-sized notebooks. It is backed up by even more memory than on the Q210, with a full 4GBs of 800MHZ DDR2 available. While this is more than the 32-bit version of Vista Home Premium can handle and therefore has a smaller impact on actual performance, it does mean that you’re unlikely to have to upgrade the RAM in the notebook’s lifetime, even should you change to a 64-bit operating system. You also get a very reasonable 250GB hard drive, giving you plenty of space for all your music, photos, videos and other documents. 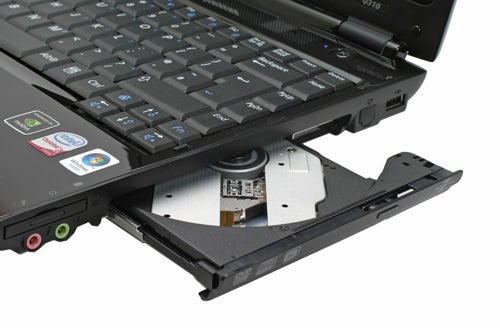 Unfortunately, while the rest of the system could easily cope with some pretty decent gaming, the nVidia GeForce 9200 isn’t up to much. Having said that, it’ll beat any integrated Intel graphics chip on the market and older games on medium settings shouldn’t be a problem. As an example, in TrackMania Nations Forever the Q310 gave a very playable 24FPS on Medium detail at the screen’s native 1,280 x 800 resolution without any anti-aliasing.


This is even more of a pity since the screen is really rather good. There’s virtually no sign of backlight bleed, no banding and text is perfectly sharp. In fact, I’d go so far as to say that for an LCD notebook screen, there really is very little to criticize. Even greyscale differentiation is pretty good compared to most, especially for a panel this size. The only visual niggles while watching films are that horizontal viewing angles have a large effect on contrast, so you have to get the screen’s angle right and, as with most laptop displays these days, the glossy coating means you’ll get lots of reflections in anything but a dark environment.

Continuing on with usability, upping the screen size from 12.1 to 13.3 inches has allowed Samsung to make some improvements to the keyboard, which now has dedicated Delete, Home, Page Up/Down and End keys, in addition to a far larger shift key on the right. This eliminated one complaint that we had of the Q210, namely its poorly placed right Shift key, so if you do find yourself sensitive to such issues, you might find the Q310 more comfortable to type on. Subjectively tactile feedback also feels just the slightest bit better, though if I was being picky I’d like just a little more depth of travel. Another highlight is the second Fn-key just above the cursor keys, which double as brightness/volume up/down. This means you can make the most important adjustments single-handed, making up for the lack of dedicated media keys and in absence of such keys, this is the next best solution. 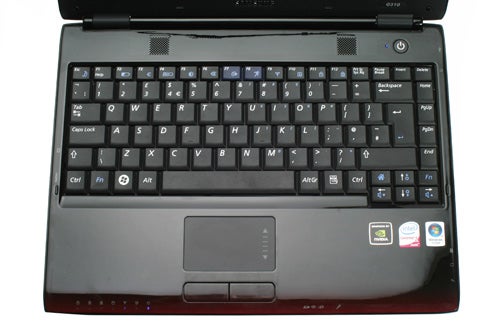 The touchpad is a good partner to the keyboard, as it is similarly nice to use. Again, a matte surface ensures smooth operation without being slippery and the change in texture makes it easy to locate by feel alone. It’s perfectly responsive and wide enough to allow for a comfortably large vertical scroll zone. 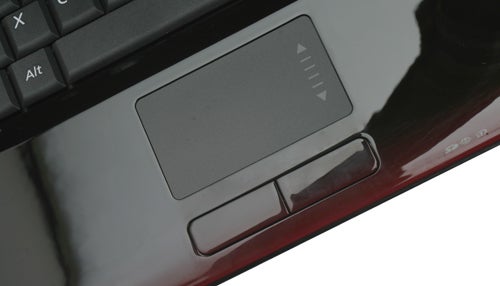 Getting onto audio performance, the Q310 fails to match the impressive Toshiba’s Portégé M800 13.3in Notebook, though to be fair, there’s little that does. The speakers are integrated above the keyboard, which is usually the best place for them. However, while they manage clear treble and reach decent volumes, there is distortion if you try them anywhere near their maximum and bass sounds tinny and undernourished. As usual then, you’re better off using a decent pair of headphones when you can.


The Q310’s battery life is affected a bit more than I would have hoped by the extra inch-and-a-bit of screen real estate compared to the Q210; in our Reader benchmark the latter managed 30 minutes of extra life and 24 minutes in the Productivity, despite using the same 6-cell 5200mAh battery. Compared to the Dell Vostro 1310 this 13.3 inch Samsung fares even worse, though this is largely because the Vostro utilised lower power integrated graphics. 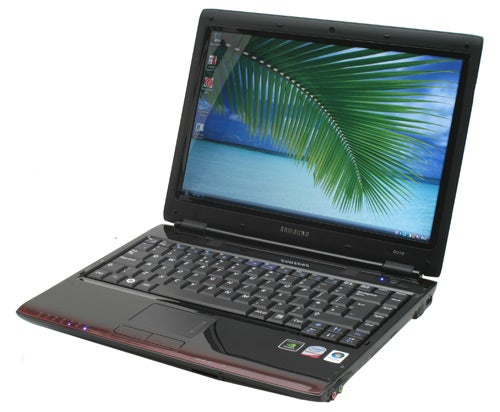 When all’s said and done, you still get some very reasonable portability with this little beast and if set up frugally you should get at least four and a half hours of working time out of it. It also has some nice touches some notebooks don’t offer, like the small LED indicator you can activate at the push of a button that shows remaining battery life in 20 per cent increments.


So is this the best 13.3in notebook for the money? This really depends on your needs. If you’re happy with everything the Q310 offers, its price of £660 is difficult to beat; especially given that everything that ”is” included works flawlessly – the only severe omission being e-SATA. If battery life is your primary consideration, then the Vostro 1310 might be a better option, though compared to the Samsung it’s rather more utilitarian and is yet to transition to Centrino 2 either.


Samsung has put together one of the more affordable 13.3 inch notebooks on the market, in an attractive chassis and packing the latest technology. So, though its slightly inferior battery life precludes us from recommending it over the Q210, if you prefer the form factor of the Q310 then it’s an attractive, affordable and well equipped alternative.