There have been times in Samsung’s TV past where we couldn’t help but think that the brand only did plasma TVs because it had to, and that its heart was very much with LCD technology. The Samsung PS64F8500, though, makes a total mockery of these previous thoughts. This 64-inch behemoth is not only the best plasma TV Samsung has ever made, it’s also one of the best plasma TVs we’ve seen from anyone. So much so that it even deserves to be mentioned in the same breath as the recently tested and utterly outstanding Panasonic P42GT60. 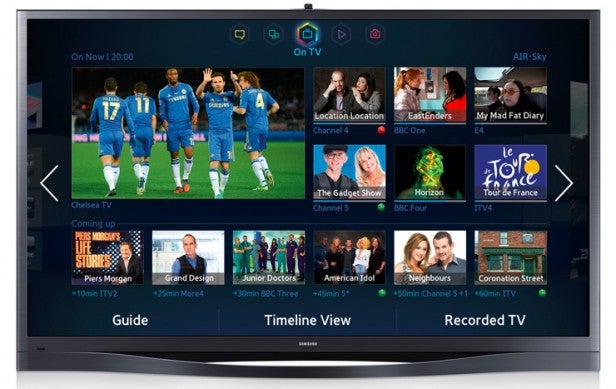 Externally, the Samsung PS64F8500 hints at its inner specialness via its bold elliptical frame-style tabletop stand and distinctive deep grey colour scheme. However, there’s no denying that the frame around the huge 64-inch screen looks large and bulky versus the unfeasible slenderness of the frames around Samsung’s latest top-end LCD TVs.

The Samsung PS64F8500 doesn’t lose out to its glamorous LCD siblings when it comes to connections, though. Four HDMIs, three USBs, and built-in Wi-Fi is every bit as extensive and handy a selection as those of Samsung’s top-end LCD TVs. As on the LCD sets, the HDMIs can handle 3D, the USBs can can record from the TV’s HD tuners and play back a wide range of multimedia from USB storage devices, while the built-in Wi-Fi (or LAN, if you prefer) is there for streaming multimedia from networked PCs or going online with Samsung’s latest Smart TV platform.

The tuners we referred to in the previous paragraph include both Freeview and Freesat HD options. In fact, like it’s Panasonic rival, the Samsung PS64F8500 provides two of each tuner, so you can record one programme while watching another regardless of whether you’re using the satellite or terrestrial tuners.

We’ve already written at length about Samsung’s latest online platform and smart interface in a dedicated Samsung Smart TV 2013 review, so we’ll try and keep things as brief as we can – a hard task considering how much Samsung’s Smart TV system has got going on this year. 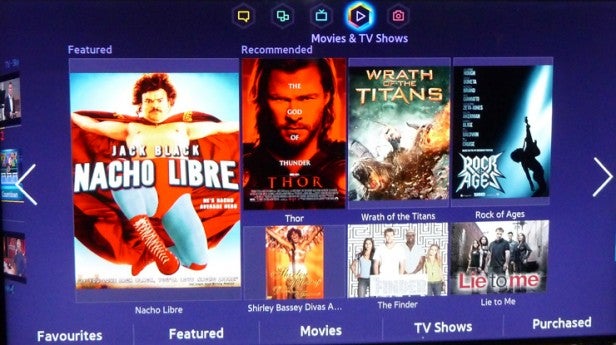 In terms of online content, Samsung is currently out in front, chiefly because it’s the only platform we’ve seen to date that supports all four of the UK’s key catchup TV services, along with all the key subscription/Pay-Per-View video services (including Netflix, LoveFilm, Blinkbox and Acetrax) plus loads more niche, but in many cases still worthy, small subscription or PPV platforms.

Samsung’s latest interface is fascinating, too. It’s built on five different ‘smart hub’ pages devoted to different types of content, with its really clever touch being that it can analyse your viewing habits and then populate the TV and streamed video home pages with stuff it thinks you’ll want to watch based on your past viewing habits.

A lack of onscreen guidance, tutorials and general information makes Samsung’s ultra-clever interface a bit hard to follow at times, at least for the first few weeks of use. But for sheer cleverness Samsung is once again at the top of the Smart TV pile. 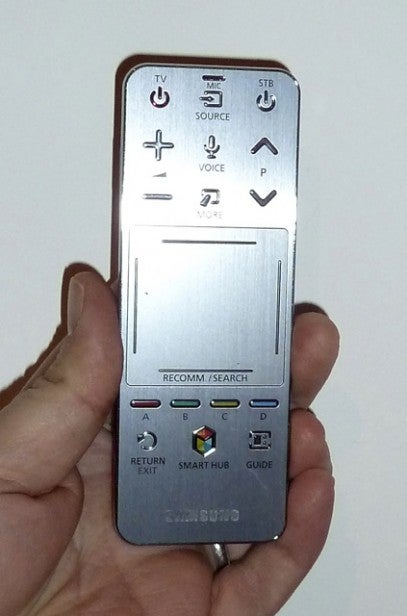 It’s good to find, too, that the PS64F8500 ships with both a standard remote and Samsung’s latest, genuinely helpful touchpad remote control option.

In our previous article about Samsung’s Smart interface we weren’t particularly complementary about Samsung’s gesture and voice controls, or its confusing and poorly explained iOS/Android smart apps. Our feelings on these broadly remain the same, except when it comes to the voice recognition system. Following some recent improvements in the systems’ cognitive abilities, and having had longer to familiarise ourselves with the systems’ possibilities, we’re slowly but surely starting to warm to voice recognition as a genuine content-finding shortcut.

As with pretty much all aspects of Samsung’s latest Smart interface, though, it would have been hugely helpful if Samsung had provided users with a bit more assistance on how to use the voice recognition system, rather than just expecting consumers to be bothered to figure it out for themselves.